These cinnamon cupcakes are filled and topped with a pumpkin coffee cream cheese frosting that will have you licking the bowl clean!

Some people are like really, really into their birthday. I'm not one of those people. Sure, it's nice to have a special dinner and get a few gifts. But otherwise, I always feel a little silly having people celebrate me for literally doing nothing but making it through another year. Everybody has a birthday and I share mine with probably at least 803584354 other people. Lucky for me, I also happen to share my birthday with National Coffee Day. Which I've always said is some kind of fate. It's definitely not a mistake that I was born on this very special day. Although I'm pretty sure National Coffee Day was named after my birth, so in that case, it's not mistake that the food holiday Gods that be determined September 29 would make the perfect National Coffee Day. Either way.

And since there's never a bad time for cupcakes, but today felt especially right for them, I incorporated coffee (PUMPKIN COFFEE) into these bad boys. Well, really just into the frosting. The cupcakes are a simple cinnamon cupcake, which made for the perfect balance with the sweet cream cheese frosting.

These cinnamon cupcakes are incredibly easy to make with a simple batter and pumpkin coffee cream cheese frosting. Of course, I didn't really feel like the frosting on top was enough, so I cored the cupcakes and added a little bit in there, too! At first, I was going to add another type of pumpkin delight in there, but then I realized the frosting was so delicious that, the more the better. I'm obsessed with my cupcake corer (affiliate link) if you're looking for a good one!

Everyone knows that frosting is really the best part of a cupcake anyway... At least when it's good frosting.

There's also nothing wrong with a little caramel sauce and a tiny bit of decorative pumpkin spice coffee granules on top of a cupcake.

I obviously used pumpkin coffee for the frosting (double the pumpkin impact!), but you can use any kind you want. All that matters is that it's a nice strong brew. I love pumpkin spice coffee, but sometimes it can be too overpowering for me... Not when it's in a cream cheese frosting! Also, the pumpkin coffee complements the cinnamon in the cupcakes quite nicely.

Is there anything coffee isn't good in? And is there any wonder why National Coffee Day is one of the most talked about, celebrated food holidays? Even if you're not into food holidays, you have to get behind this one. I mean, think about all the coffee does for you all year long? It deserves a little celebration! Seriously, coffee deserves this day so much more than I do. And I'm more than happy to share the attention with it.

When I first started my current job (five years ago last week!), I was thrilled that nobody knew it was my birthday since I had only worked there for only one week at that point. I got through the whole day without a hitch, until suddenly, every single employee walked over to my desk singing happy birthday. Talk about new kid embarrassment. Though I guess it's not really any different than when you're in elementary school and actually bring cupcakes for your class each year. If you guys were in my class, I'd totally bring these in for you. But only if you promised not to sing.

Sing instead to coffee. Sing it your praises and wish it a very happy year ahead. As a matter of fact, why don't we throw a big surprise party for coffee? Doesn't coffee seem like the sort that would appreciate a good surprise party? I'm sure it could certainly party all night. At least probably much later than I can in my old age!

I almost can't even believe that this is already my third pumpkin recipe of the season and we're not even in October yet. I hope you are as OK with that as I am. If you're not into pumpkin, I still highly encourage you to make these cinnamon cupcakes with a coffee cream cheese frosting. You owe it to coffee on its special day!

How are you celebrating National Coffee Day?

If you're looking for more delicious cinnamon desserts, check out my Coffee Cinnamon Scones and my Cinnamon Bun Oreo Cheesecake Bars. I also want to try these Orange Cinnamon Butterflake Rolls from Oh, Sweet Basil! 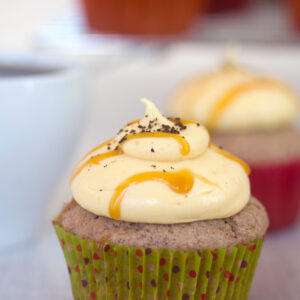