One of my resolutions for the new year is to cook dinner more often. You know, instead of coming home from work and ignoring the chicken I took out of the freezer to thaw or the salmon that will most definitely go bad if we don't eat it tonight.

What seemed so important in the morning suddenly doesn't matter at all when my mind has been going a million miles an hour all day and I haven't even planned what I'll be doing with said chicken or salmon.

I usually make this executive decision as I'm on my train ride home and I realize that I'm dangerously close to falling asleep and missing my train stop (disaster!). And I'll start thinking about what kind of takeout we should get, where we can go out for dinner, or what I have in the fridge/freezer for whipping up sandwiches or a frozen pizza.

It's not even the act of cooking dinner that's so tiring to me. It's just the fact that I know by the time I'm done cooking, eating, cleaning up, and getting lunches ready for the next day, it will be after 8:30 p.m. and I'll still have to do some blog work and start thinking about going to bed and getting up the next day to do it all again (I knoww this is probably a million times harder for those of you who have kids, but I'm just talking from my own personal reality here).

Wow, I'm really convincing myself that this resolution was a wonderful idea, huh? But the fact is, cooking dinner makes me happy. Not just the act of eating a usually healthy-ish (most of the time) and satisfying meal, but also simply being in the kitchen.

I usually set up shop with my cookbook or recipe blog, a podcast (the Happiness Project is my favorite cooking weeknight dinner podcast), a cup of coffee (I love my after work coffee!), and my dog by my side. Usually my husband will finish up his work at the kitchen island or he'll come hang out with me while I cook so we can talk about our days.

And it's just the best part of my day. I know I could probably get better about prepping meals ahead of time or doing more repeat recipes that are familiar and easy, but nothing makes me happier than making a brand new delicious meal after a long day of work. This year, I'm vowing to dig into my library of cookbooks, which it seems like I rarely cook from.

You're probably wondering why I'm telling you this in a post about doughnuts. Well, it's really just to say that my cooking dinner more often makes me feel justified in eating doughnuts more often.

My dinners aren't always the healthiest (um, tonight I'm making Smitten Kitchen's artichoke stuffed shells), but I also have plenty of vegetables on the side and I often make green smoothies (kale, spinach, pineapple, and chia seeds) to go along with our meals. Plus, I almost always have dinner leftovers that help me avoid going out to lunch at work the next day.

So therefore... When I'm done cooking dinner and am finally sitting down to get my blogging on, I'm totally allowed to have a doughnut. Or maybe two. I was seriously craving both doughnuts and peanut butter last week, so I incorporated them with this dessert. I also had cinnamon rolls on my mind and loved the idea of making a cinnamon doughnut with peanut butter filling.

If you've ever made homemade doughnuts before, you probably know that it's not really a "get home from work at 7 p.m. and make" kind of thing. I recommend saving doughnut making for the weekend or your day off. You have to let the dough rise a couple of times and, of course, frying always feels like a bit of an ordeal (a fun ordeal, nonetheless!).

I made a sugary peanut butter filling that was just perfect, along with a glaze that combines both cinnamon and peanut butter.

Can we talk about why the cinnamon and peanut butter combination isn't utilized more often? Chocolate and cinnamon is a definite thing (Mexican hot chocolate!), but I feel like cinnamon goes even better with peanut butter. And doughnuts... Everything goes with doughnuts!

And what's better than a fried and filled doughnut? Seriously. If you told me that you'd give me one of these doughnuts every single time I cooked a homemade dinner, I'd do it without a complaint.

I might even manage to stay awake on the train, too, just thinking about these doughnuts that were waiting for me at home.

At first, I was going to take a picture and Instagram Story every single dinner I had this year. 365 days of dinners. But then I went out to dinner a couple times with friends and didn't take photos and I may or may not have had a couple questionable dinners I wasn't too proud of (ahem, Domino's, ahem).

And then call me out when you say way more photos of these cinnamon doughnuts filled with peanut butter cream.

OK, now that I've left you with these doughnuts, I need to get my dinner making butt in gear. I'm on a two-day streak and not slowing down now!

Please, please share with me your favorite weeknight meals that are both healthy and flavorful and don't take 4902 hours to make. I try to keep up with my pinning so I have constant inspiration, but I'm always looking for new ideas. I need to be able to keep my doughnut excuses coming!

How many nights a week do you make homemade dinners? And more importantly, what are you making??

If you're choosing donuts over dinner, too, I have some more fun donut recipes for you to try! I love these Glazed Coffee Chocolate Frosted Donuts, but if you're looking for an even quicker donut fix, try my baked Milky Way Donuts! I'm also dreaming about making these Maple Pecan Donuts from Dot+Olive! 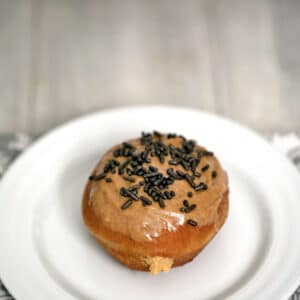