The Croque Madame (AKA grilled ham and cheese sandwich with mornay sauce and egg) is the ultimate breakfast. This Thomas Keller Bouchon version is everything you've ever dreamed of!

I’m probably one of the worst WORST decision makers in the world. I wish I could just walk around with a personal assistant who would make decisions for me when I didn’t feel like making them. Even though I’m not really an astrology person, I like to blame my poor decision-making skills on the fact that I’m a Libra. And I really only do that because my high school guidance counselor asked me if I was a Libra during one of our college decision discussions. In fact, I look back on my college decision and am pretty sure I chose UNH because my mom said she liked the drive there better than the drive to UCONN. Done and done.

I’m only really telling you all this because I keep thinking about what my all-time favorite breakfast is and I cannot decide. What would I do if someone put a platter of Eggs Benedict in front of me and a plate with a Croque Madame on it? Well, I’d totally eat them both. But if both options were on a menu and I had to decide what I wanted brought out to me? I’m just not sure I can answer that question.

Luckily for me, it’s rare that a restaurant offers both; at least in my experience. And now that I’ve made Croque Madame for the first time ever, I can make both of my breakfast favorites at home. Which I guess just means I have to make that ever so important brunch decision way more often. #sendhelp

I could talk about the Croque Madame at The Colonnade’s now closed (SOB) restaurant, Brasserie Jo foreverrr. But when it came to searching out the perfect recipe, I went straight for Thomas Keller. Because I had the Bouchon version in Vegas and seriously fell in love. Plus, I’m totally intimidated by almost everything else in my Bouchon cookbook (affiliate link) and this sounded like one thing I could actually handle.

The key to the perfect Croque Madame? I’m going with the bread… Keller recommends brioche, but I think challah is just as nice.

The other key is making sure the ham and cheese doesn’t extend over the edges of the bread. Seriously. Keep it all inside that bread!

Also, making an egg that is perfectly cooked. Overdone yolk? Uh-uh; throw it away and start over.

Then there’s the mornay sauce. Have you ever made one? This was my first, but it’s a pretty basic sauce involving all kinds of deliciousness like heavy cream, milk, butter, and flour. Oh, and cheese… specifically emmentaler cheese.

Try to save it for the Croque Madame instead of sticking a straw in it. That would be weird. But also kind of awesome. I wouldn’t judge you at all. FYI the sauce needs to simmer for 30 minutes, so keep that in mind when you wake up starving and craving a Croque Madame.

Omg. omg. omg. This is the true definition of the words “I can’t even.” At least, I think? I’m going with that.

This is multiple layers of ham and cheese, sandwiched together with thick buttery bread. Plus an egg, plus mornay sauce and a nice sprinkling of parsley. I highly recommend cutting this in half to make it a tiny bit more manageable.

Would Thomas Keller think it was weird if I sent him a thank you note? Or like an Edible Arrangement? I feel like I need to do something for a) creating this glorious recipe and b) teaching me how to make it at home.

The only thing this was missing? Well, it totally should have been served with frites. It’s almost a shame it wasn’t. But I’m taking baby steps with Thomas Keller and this was just step 1. Step 200 will be cracking open my French Laundry cookbook (affiliate link) and attempting to make something from there.

OK, now I need a good excuse to make this again because Croque Madame is really not something you should be whipping up every weekend. Or is it??

Would you choose Croque Madame or Eggs Benedict?

If you love decadent brunches as much as I do, be sure to check out my French Toast BLTs and my Bubble Waffle Banana Split Tacos. I also need this Pulled Pork Eggs Benedict from Ways to my Heart in my life! 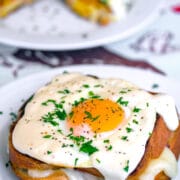