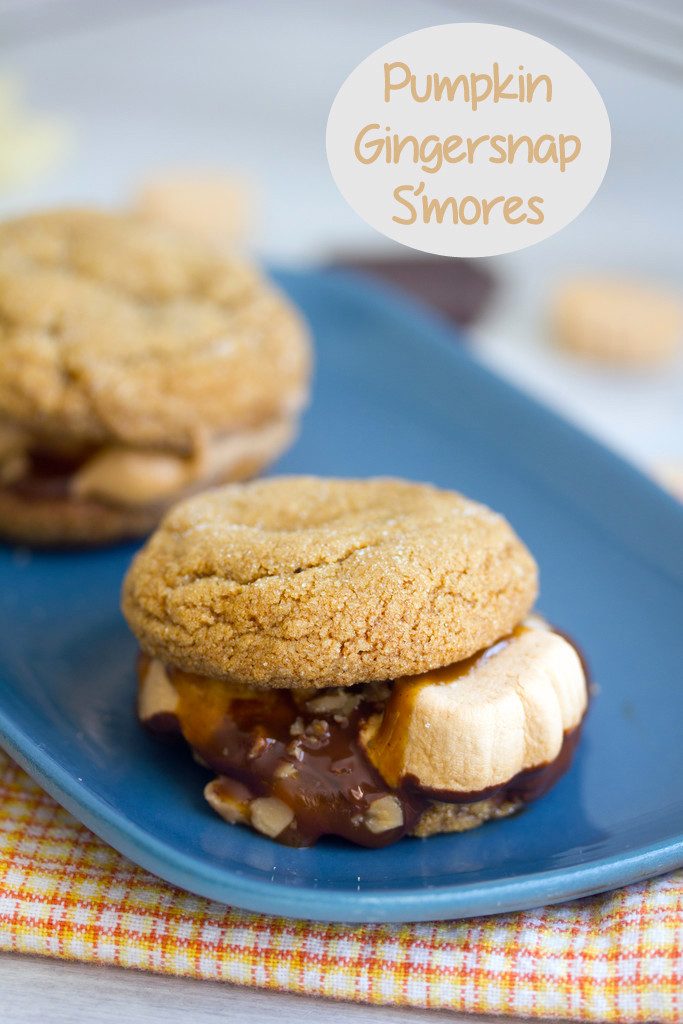 Put your pie away. Just kidding, don’t really. I love pie. Like a lot a lot. And I’ll gladly help myself to some any time it’s available. But fall is about so, so, so much more than pie. And cobbler. And crisps. And even apple cider doughnuts (hard to believe, right??). Just because it’s already too freaking cold for campfires (at least here where I live in New England), but I’m not really ready to give up on s’mores. I’m never ready to give up on s’mores. So, I’m not.

I recently discovered that cookie s’more are about 14.9% better than graham cracker s’mores. Which is saying a lot considering I’m a huge fan of the good ‘ole traditional s’more. I bought a bag of pumpkin spice marshmallows at Target because I just couldn’t resist. I’ve been buying way too many exclusive candies and baking sweets from Target lately because I can’t resist. My pantry is seriously filling up, so I decided I needed to jump on some recipe creation. Marshmallows just equal s’mores to me and so, these Pumpkin Gingersnap S’mores were born.

Where you’d traditionally have a graham cracker, you have a pumpkin gingersnap. Add in some pumpkin spice marshmallows, milk or white chocolate (your choice!), caramel sauce, and toffee, and this is like no other s’more you’ve had before.

Please tell me you can get with me on this. I could eat pumpkin gingersnaps non-stop from now until forever.

Actually, I could probably just eat that batter. Obviously all cookie dough batter is amazing, but there’s something about gingersnap dough that makes me extra happy. And all kinds of holiday-ish.

But the cookies are cool, too, especially because you dip them in more granulated sugar before you bake them. 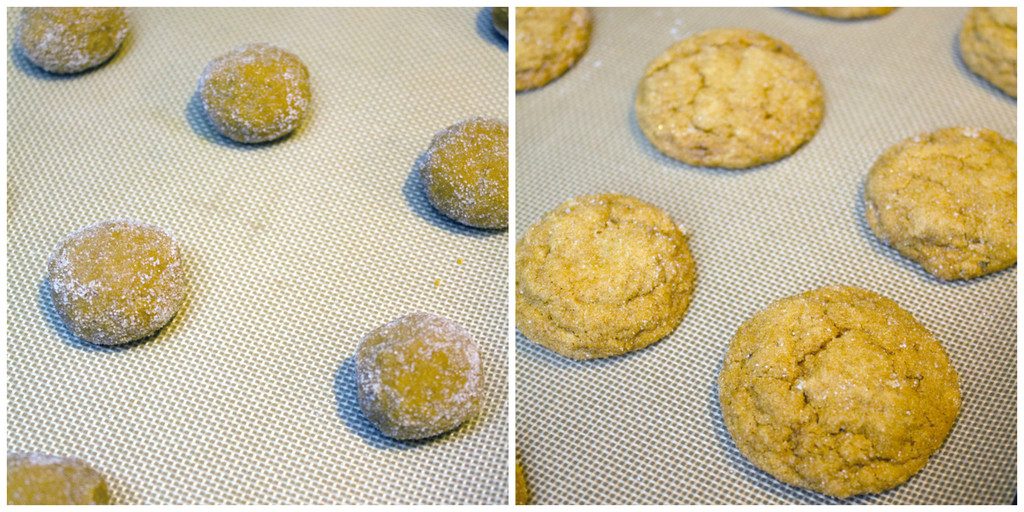 Those pumpkin marshmallows are super cute and way too tasty. In retrospect, I probably added one too many to each s’more. 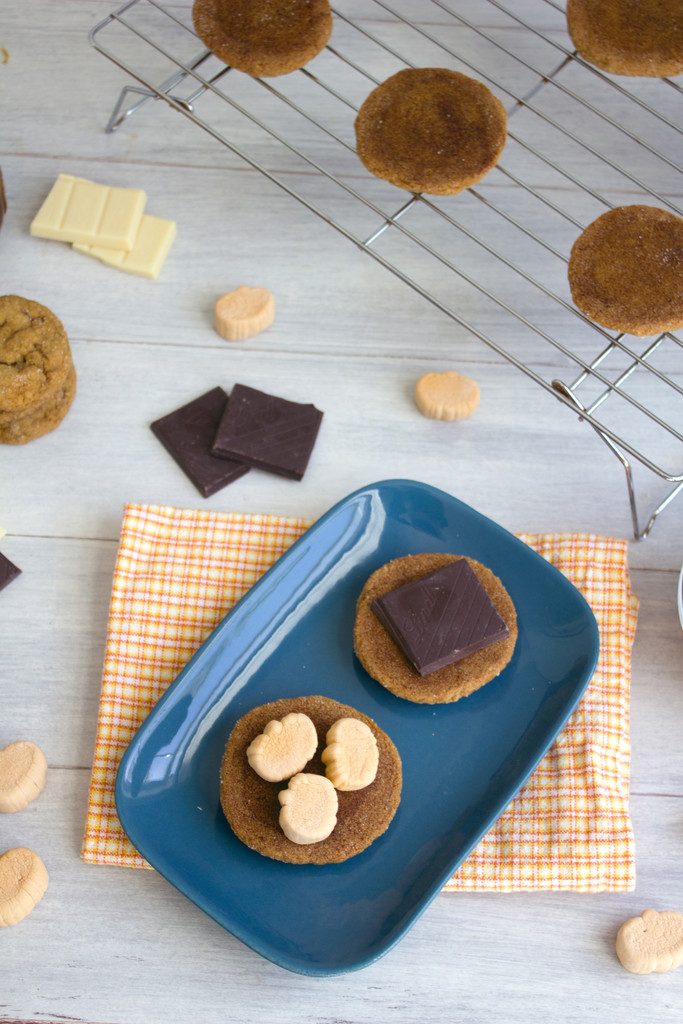 Let’s just say these s’mores didn’t end up being the neatest thing in the world. In fact, they may just have been my messiest dessert ever. 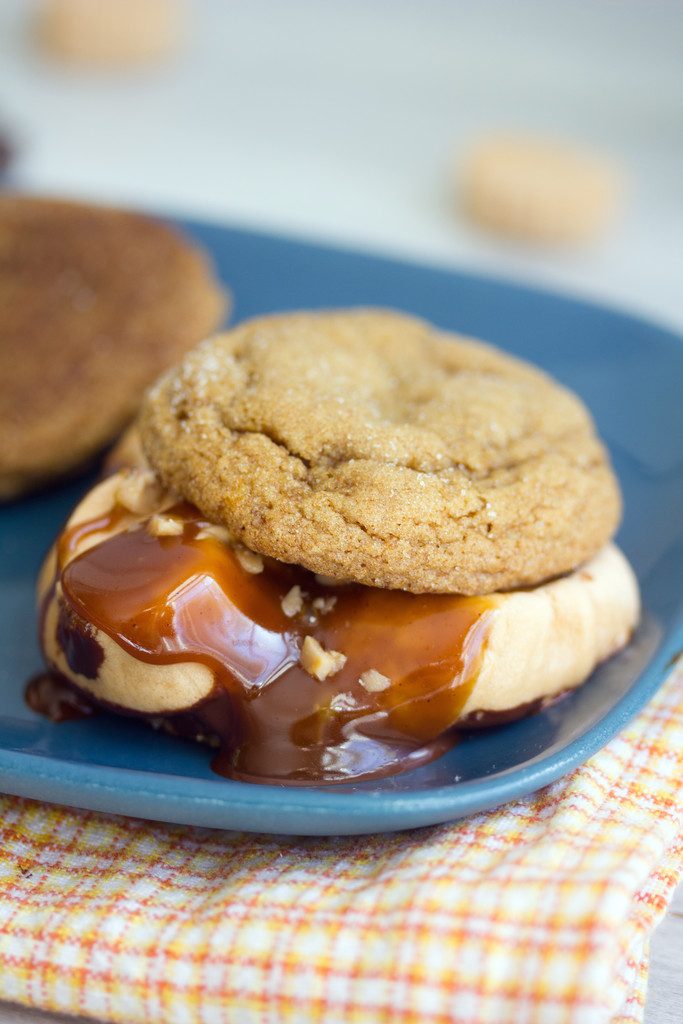 A fact I am entirely OK with. Honestly, there’s not a whole lot I would change abut these bad boys. How can you really go wrong? Check out all that caramel and toffee! Plus, while messy isn't always better, it can od made me proud of this here little dessert. 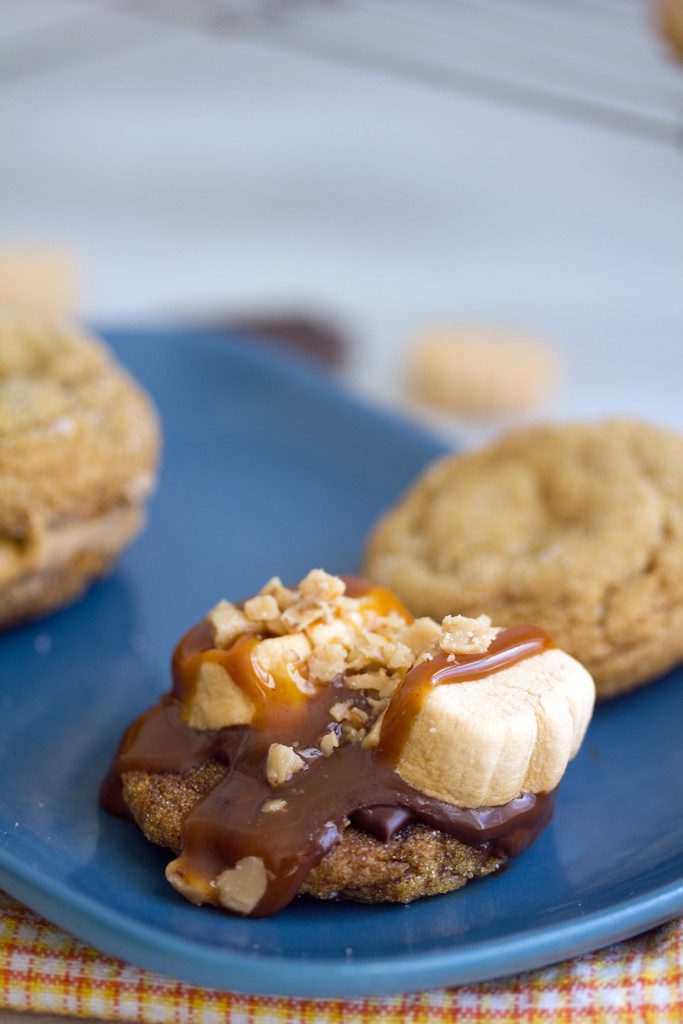 I have a love/hate relationship with white chocolate…. Sometimes I can’t get enough and sometimes it’s just way too sweet for me. I always like milk chocolate (and dark chocolate even more!). I really thought white chocolate went perfectly with these cookies s’mores… But I couldn’t resist making some with milk chocolate, too. 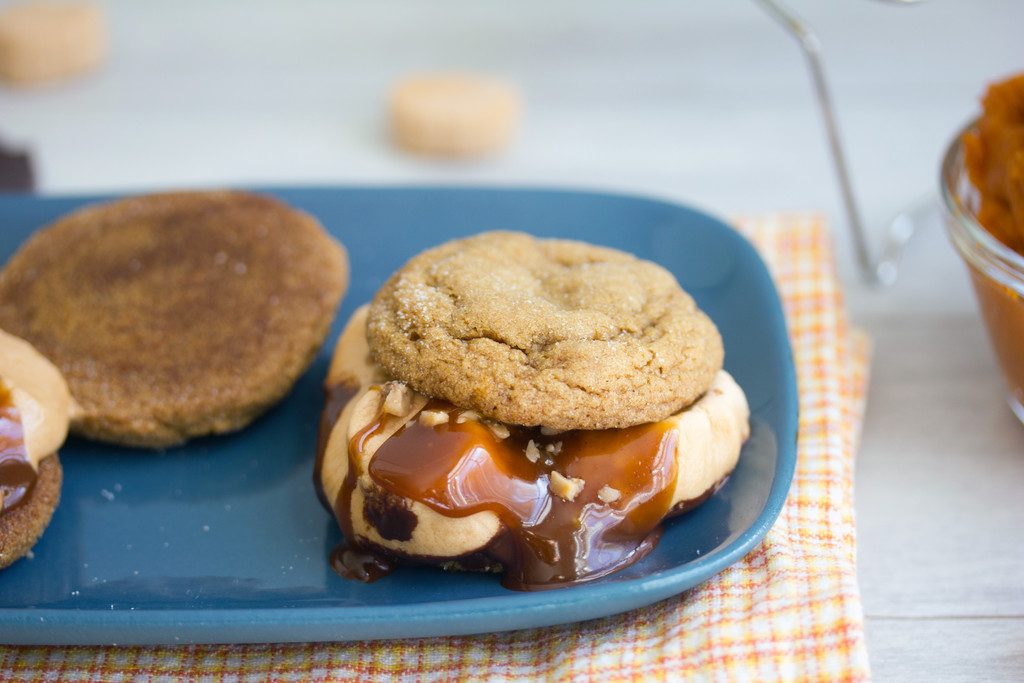 Nope, you can’t go wrong. Technically, you wouldn’t even be going wrong if you were eating the “plain” pumpkin gingersnaps alone, but it just wouldn’t be quite as fun.  And the marshmallows? It's a good thing I needed them for this recipe because I was starting to spend all my free time "trying 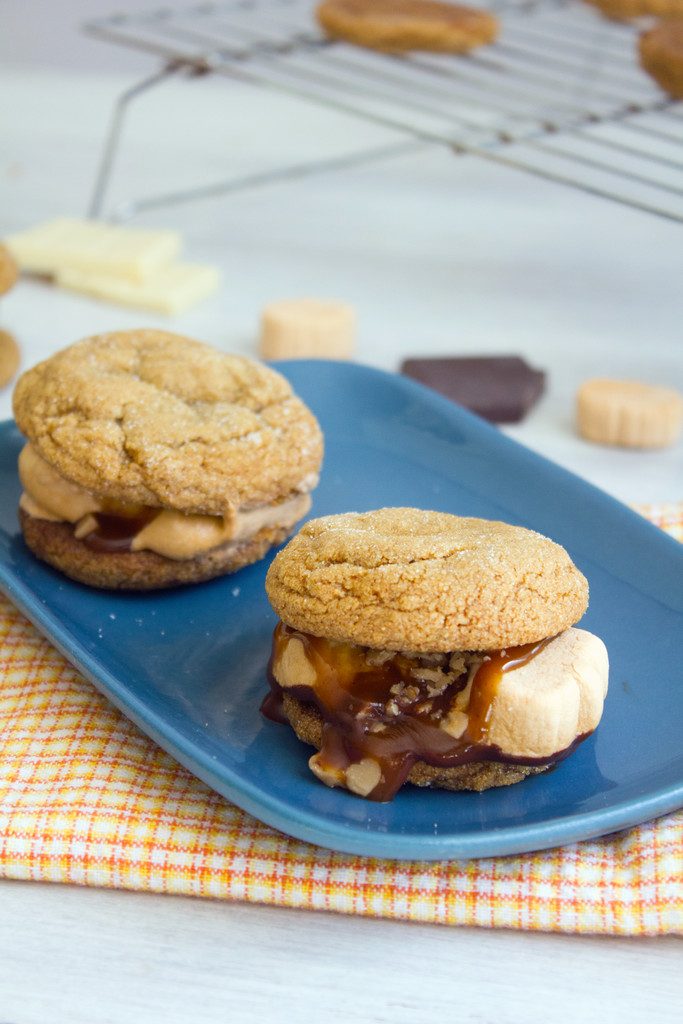 I’ve probably told you this before, but I strongly recommend whipping up a batch of the caramel and just storing it in the fridge. Then, when you get an urge to make something like this, you’ll have a major element all ready to go. Or you know, when you get the urge to eat caramel with a spoon. Which surprisingly happens way more than you’d think. 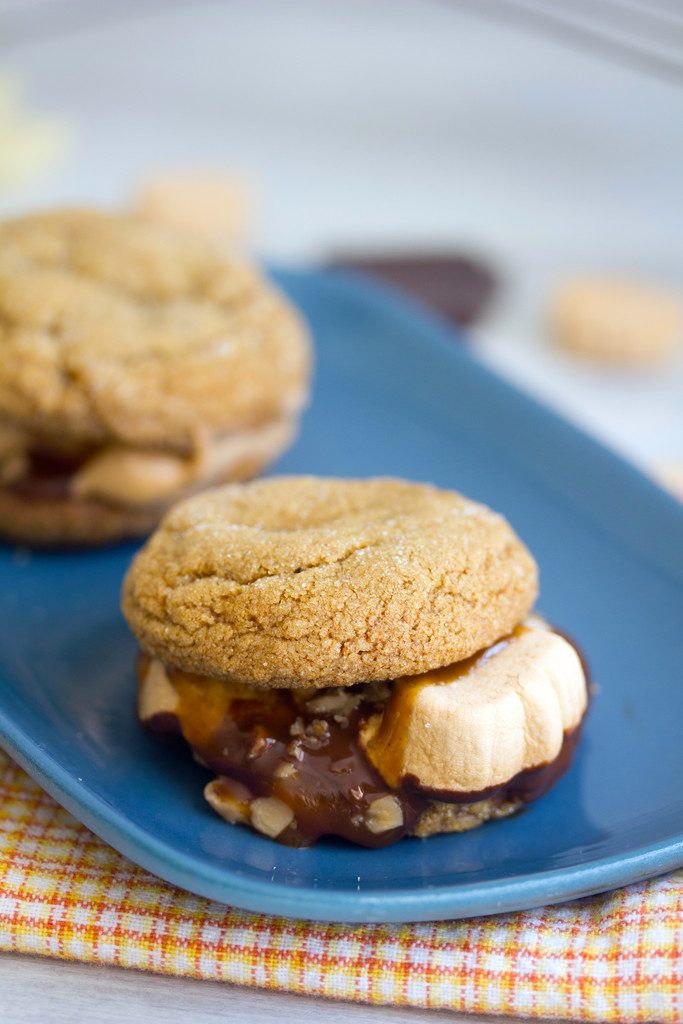 What's the makeup of your ideal s'more? Cookies, graham cracker, type of chocolate? Tell me all! 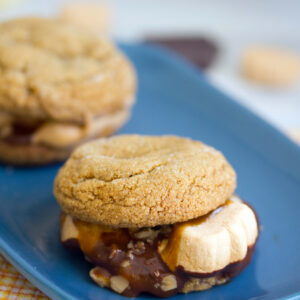 Traditional graham cracker s'mores are always welcome, but when it gets too chilly for campfires, consider these Pumpkin Gingersnap S'mores instead. Pumpkin gingersnaps, pumpkin spice marshmallows, chocolate, caramel, and toffee make for the perfect s'mores!
5 from 1 vote
Print Pin Rate
Course: Dessert
Makes: 24 s'mores
Author: We are not Martha