Books » What I Read: September 2017 | Recommendations for Books to Read

Have you joined the times and begun to read books on e-readers like Kindles and iPads? Or do you remain a traditionalist and only want to read actual books? I went through a ridiculous e-reader phase where pretty much everything I read was on my Kindle, but then I started purchasing hardcover books here and there and remembered how much I love actually holding a book. I think the Book of the Month Club is mainly to blame. Now, all I want to do is buy print books all the time and who needs new clothes or food because there are best-sellers to buy! Also, my bookshelf is legit overflowing.

I used to be the first to stand up for e-books when people dissed them and still do to an extent (I can't hate on the fact that I can bring 100 books on vacation with me without adding a pound to my luggage). But a study recently came out that says reading print books actually helps you retain information better than when you read books on screen. And I can actually see how that's really true (especially as someone who tends to read really quickly and not always retain a ton of information) and it's making me want to bring more print books into my household. Help.

In looking at what I read last month, six books were print and four were on Kindle/iPad and they're a really great balance of books in terms of content and quality. I hope you find something you want to read this month (my favorite of the year so far is on here!); if you do, let me know!

Edgar & Lucy by Victor Lodato: Yesss, this is a good one. It wasn't a book I immediately loved from the start, but the deeper I got into it, the more I fell for it. It's the story of a mother and young son and their very complicated relationship with each other and those around them. It's hard for me to share too much without giving anything away, but if you're willing to tackle a longer book, the characters in this one will stick with you for a long time.

Good Neighbors by Joanne Serling: This book isn't officially out until February, but I got an advanced copy of it from Amazon Vine. It seems to have very mixed reviews and it wasn't my all-time favorite read, but I actually enjoyed it and think it deserves more credit than it's currently being given! The style of writing is very different, but the storyline is reminiscent of a Liane Moriarty book, focused on a group of wealthy mothers with a little bit of mystery thrown in.

Home Fire by Kamila Shamsie: Wow, this is a must-read. I was seriously blown away by this book in all kinds of way. To me, the sign of a really good book is one that can make you question everything you thought you knew and makes you put yourself in someone else's shoes when you'd rather just shut your eyes. Home Fire is about love, religion, politics, and global issues (whoa sounds heavy, right?), but also entertains and does an amazing job of connecting you to the characters.

A Stranger in the House by Shari Lapena: I only just recently finished Lapena's last book, The Couple Next Door, a couple months ago and was excited to read her new one. Similarly to The Couple Next Door, I enjoyed A Stranger in the House, but it didn't totally blow me away. It's another mystery thriller type book about a couple. This time, the wife gets in a car accident and can't remember where she was going or why she was speeding. There are lots of little twists in the book that will have you frantically trying to figure out the ending, but I didn't feel like it concluded in a very satisfying way and I wasn't left with that "omg" feeling that other thrillers leave me with.

Sugar by Kimberly Stuart: This was a really cute lighthearted read for any food lover. Pastry chef Charlie Garrett leaves her fancy NYC restaurant position to go work for her ex-boyfriend at his new restaurant in Seattle. Well, it turns out, her ex is not only opening a new restaurant, but he's filming a reality show about it. Much to her dismay, Charlie is instantly thrown into the show and the spotlight and ultimately has to decide if her successful career is worth giving up on some of that other life stuff. This is a quick read and a very enjoyable one.

An Abundance of Katherines by John Green: I hate to say this, but I think I'm just not the biggest young adult fiction fan. I always thought that I was, so it pains me to say that, but lately, I feel like every YA novel I read, I find myself alternating between rolling my eyes and trying to keep them open (aside from anything by Jenny Han or Megan McCafferty). This was a cute book, but I just found it too cheesy. Basically, Colin Singleton has been dumped 19 times, all by girls named Katherine. He sets off on a summer road trip with his friend, Hassan, and they end up meeting a girl and staying with her and her mother in a small town, where Colin works on his mathematical theorem that will determine who will dump who in a relationship. It's a cute story, but just not right for me. That said, I also didn't totally love Green's The Fault in Our Stars (I know... you can yell at me now), so take this for what it's worth.

The Handmaid's Tale by Margaret Atwood: Finally read it and loved it! I had a vague idea on what it was about since it's been such a popular book for so long and then the Hulu show recently came out. But I absolutely loved how everything unfolded in the book and I think it all felt so especially relevant (and scary) in the current times. Immediately after finishing, I made Chris read the book and then we watched the show together, which was also amazing. It's one of those stories that sticks with you in a totally disturbing way.

The Horse Dancer by Jojo Moyes: This definitely isn't my favorite Jojo Moyes book, but it was a very sweet read about a young girl who loves horses. It starts off pretty slow, but is engrossing enough that you'll likely find yourself cheering for Sarah... But also being totally frustrated by her for not telling her guardians about her horse and her need to keep him. This one was less love story (though there were still some elements) than the books I've read from Moyes, which may be either a positive or negative for you. Also, if you're a horse lover, I feel like you'd definitely be more likely to be a fan of this book.

Little Fires Everywhere by Celeste Ng: Favorite book of the year so far! Seriously. Ng did such a beautiful job of developing her characters and when the book ended, I didn't want to leave Mia, Pearl, or any of the Richardsons. It's hard to even tell you what this book is about because it feels like it's about so much, but in a nutshell, it covers the issue of what makes a "parent." If you read and enjoyed Celeste Ng's Everything I Never Told You, I honestly think you'll like this one even more!

The Outer Cape by Patrick Dacey: I picked this one up from Amazon Vine as a beach read since it felt so New England vacation-y. Well, it definitely isn't and the title and cover of the book are a little deceptive. It does mostly take place on the Cape, but isn't about anything fun or vacation-y.It's a book filled with drama and infidelity. Also, most of the characters are pretty unlikeable, but that's actually OK because I still enjoyed most of the storyline. However, the last 50 or so pages of the book majorly dragged for me and this one definitely wasn't a fave.

Have you read anything good lately? I am always down for recommendations and have a nice long vacation coming up next week, so could use a beach read or two!

Check out my previous lists of reads from earlier this year for tons more recommendations! 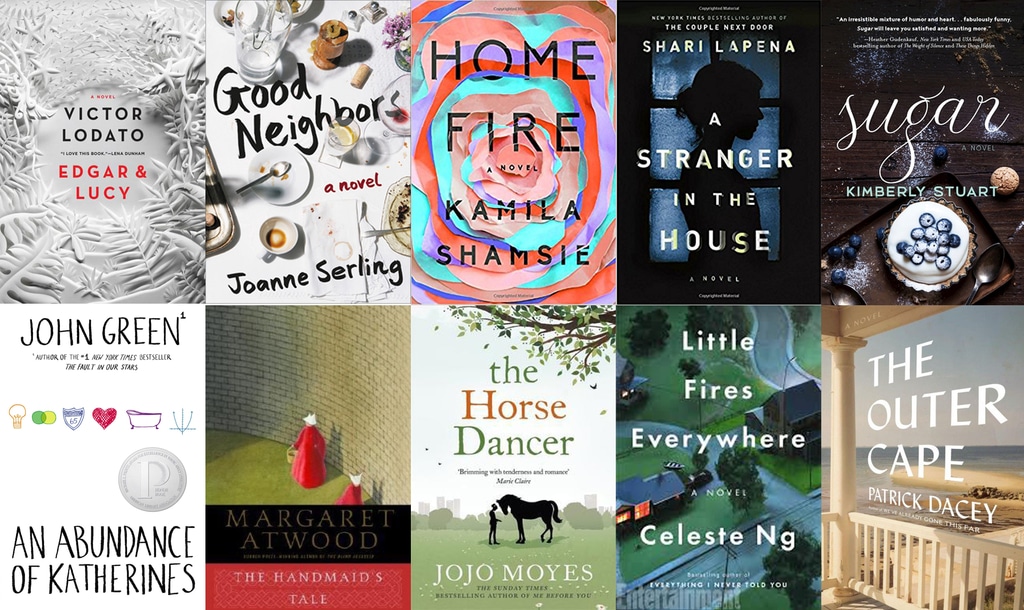