This Chipotle Chicken with Cashews is a traditional cashew chicken given a fun twist with chipotle peppers and more for a quick and easy weeknight dinner.

(This recipe for Chipotle Chicken with Cashews was originally published in July 2012, but was updated in 2019).

This dish is deceptively easy. You might look at the ingredient list and photo and think "oh heck, no. It's Thursday evening, I've had a long week, and I do not have time for these shenanigans." But you'd be missing out big time. Because these so-called shenanigans are some of the easiest shenanigans I've been up to in a long time.

I mean, if you really look at the ingredient list, most of the ingredients are spices or sauces or oil or butter. I almost always have every single ingredient on this list in either my pantry, fridge, or freezer. You only need 2 pots to make this Chipotle Cashew Chicken and that means you only have 2 pots to wash when you're done eating it.

Really, you have absolutely nothing to complain about. But you probably could complain. Because whomever you serve this to will be incredibly impressed. And you can pull the old, "I've been on my feet all day and in the kitchen slaving over a hot stove to cook this for you... It's SO your turn to do the dishes." Unfortunately, like I said, there are only 2 pots to dirty when making this. So,  you might actually want to save that complaining for another night.

I've been wanting to make a cashew chicken for a while and I stumbled across Rachael Ray's version with chipotle chicken on the Food Network's website. Any opportunity I have to add chipotle to a meal, I take; so this was a no-brainer for me. Oddly enough, the Food Network's photo of this dish looks less than appetizing. Almost so much that I didn't want to make it.

I made a bunch of adjustments and while my photos may not be winning any awards either, I'm totally in love with this dish. But this just goes to show, don't judge a recipe by its photos. You really need to just imagine all of the ingredients on the list together. In harmony. It's tough with this recipe's eclectic ingredient list, so you should probably just take my word for it.

See? That's a lot of ingredients in one bowl, but a pretty super simple process. And you end up with a dinner that's both delicious and packed with lots of healthy ingredients.

Of course, if you prefer to skip out on the brown rice, you can certainly replace it with quinoa, faro, cauliflower rice, or nothing at all. Who says you need a carb with every meal (uh, besides me?)?? Chipotle chicken with cashews and peppers makes for a delicious dinner, rice or no rice.

There is so much I love about this meal, including the fact that it's a kind of delicious fusion between Mexican and Asian. It definitely has a spicy kick, but not so spicy that it's not enjoyable (however, if you're really anti-spice, only use 1-2 chipotle peppers).

Also contributing to that love is the fact that you can eat it with chopsticks... But that you certainly don't have to. Hey, if you're trying to practice your chopsticks skills, I highly recommend getting your own pair and trying them out when you're home. If you're really in it to win it, can I recommend these ones (affiliate link)??

This is one of those dishes that will likely go on your regular dinner re-make list. Especially when you realize you have most of the ingredients in your pantry already (I literally only had to buy the chicken, peppers, and parsley when I made it this time!)

I love when complicated-looking is easy.

Oh, I should definitely note that another awesome thing about this recipe is that it will likely give you plenty of leftovers and they're perfect for packing up and taking on-the-go.

And dreaming about the chipotle chicken waiting for you in the fridge is likely to help you get through a crazy morning of work!

What's your favorite easy-to-make dinner that looks a whole lot more complicated than it is?

If you like this idea for a quick and easy weeknight dinner with chicken, be sure to check out my Basil Chicken in Coconut Curry Sauce and my Baked Chicken Chimichangas. I also can't wait to try these Chicken Bacon Ranch Stuffed Zucchini Boats from Hungry Hobby! 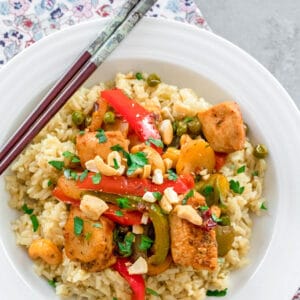