I'm a Northern girl through and through. Born and raised close to Boston, I never had a sip of sweet tea growing up. Sweetened ice tea, sure, but I don't think I had even heard of actual sweet tea until college.

And there's no way you'll ever find me complaining of my New England fare consisting of lobster, baked beans, and maple syrup. And fluff. How could I complain about anything when marshmallow fluff is involved?

But then I grew up, fell in love with vodka (t'was a lifelong romance), and discovered sweet tea vodka. Mixed with a little bit of water, lemon, and ice; sweet tea vodka totally hits the spot when it's sweltering out and you want to sit outside in a big hat with a plate of hush puppies. Just kidding; I never had a hush puppy as a child either.

I first created these cupcakes back in 2011 when sweet tea vodka was just gaining in popularity. Luckily, it's stuck around and there are now several varieties on the market. Whether sitting on your farmer's porch down south or on your tiny and noisy Boston deck, sipping on sweet tea vodka just feels like summer to me.

Fun fact: My husband is from Virginia and for our wedding favors, we gave our guests sweet tea in a jar to tie together and pay homage both of our roots (you know, the Boston tea party and all). It was all well and good until I went to the grocery store and bought 130 lemons two days before the wedding, only to realize that every single one of them was too big to fit into a mason jar (when our families gathered together to assemble the jars).

Ah well, they say every wedding has to have some kind of disaster and if that was ours, I think we're doing pretty well (we ended up slicing the lemons and wrapping them in plastic wrap, which didn't have the same visual effect, but got the job done).

Back to the sweet tea vodka cupcakes! The cake portion of the dessert is super lemony (just how I like my sweet tea) from the addition of lots of lemon zest and juice. Other than that, they're pretty standard cupcakes with a batter that's easy to whip up.

Once the cupcakes are out of the oven and cooled, you'll lightly brush the tops with sweet tea vodka. If you're planning to serve some of these cupcakes to kids, you may want to set those ones aside without the vodka brush.

Then again, the frosting has sweet tea vodka in it, too....But I promise it's a super small amount.

I just think cupcakes with straws are the cutest little things, y'all. Just kidding, I promise I'm not going to start pretending I'm from the south just because I made a batch of sweet tea vodka cupcakes. Though I do really like saying y'all and just can't help myself sometimes.

No matter what time of year it is or where in the world I am. I know a lot of people don't love the heat, but 80 degrees is my dream temperature.

Seriously though, this is simply a summer cocktail in cupcake form. But in case you're worried, I should tell you that the vodka is definitely not over-powering at all; but there's a touch of tea and a whole lotta lemon involved. Just the refreshment you need in the summer heat.

It doesn't get much better than this on a summer evening. Maybe a side of fried chicken would have been appreciated, but I'm not complaining.

If you're interested in more boozy desserts (my specialty!), check out these Blueberry Mojito Doughnuts or these Rosé Sour Patch Kids. I also love these Paloma Cupcakes from Nourish and Fete. 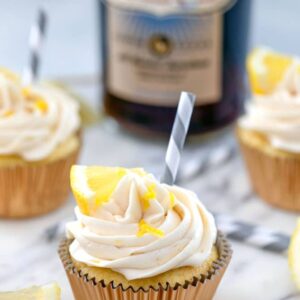