(This recipe for Blueberry Cheesecake Ice Cream was originally published in June 2011, but was updated with new photos in 2019).

Have you ever thought that maybe America's colors are red, white, and blue because we celebrate our country's birthday during strawberry and blueberry season? I have. And now you probably have, too.

Blueberries are ridiculously fresh right now and a ridiculously good price and I cannot resist buying at least two packages of them every time I'm at the grocery store. Sometimes I fear I'll turn into Violet Beauregarde from Charlie and the Chocolate Factory. But I really wouldn't be mad about it.

I knew I wanted to make a blueberry ice cream, but when I spotted a Cooking Light recipe for Blueberry Cheesecake Ice Cream, I was sold. I was more than sold. I was, "I'll empty out my purse and my pockets right here in the street and give you every last piece of gum and lint I've got." Oh, my gum and pocket lint aren't worth anything? What about a lipgloss or chapstick? I've got about 13 of those in my purse. Plus, a ton of receipts, expired coupons, and gift cards from 1999.

But seriously. Not only is this one of the best homemade ice creams I've ever had, but it is, get this, better for you than a typical ice cream. Seriously. Making it with 2% milk and half-and-half instead of whole milk and cream cuts down on the fat in a major way (which means, ahem, you can have two servings).

Also, blueberries have tons and tons of antioxidants, so I'd argue this blueberry cheesecake ice cream is actually healthy. And suitable for breakfast. Amen. I obviously had to include some graham cracker crumbles in the mix because, honestly, what's a cheesecake without a graham cracker crust?

You might want to consider starting this recipe the day before you want to indulge. Only because there's lots of waiting time. And it's not fun to wait when all you want to do is stick your spoon into a big scoop of homemade ice cream.

This ice cream isn't difficult to make, but it does take some time... And an ice cream maker! I highly recommend the KitchenAid Ice Cream Bowl Attachment [affiliate link] if you have a KitchenAid mixer. I've had it for years and have made countless batches of ice cream with it!

For the blueberry cheesecake ice cream, start by combining the sugar, cream cheese, and egg yolks into a large bowl. Beat them with a hand mixer at a high speed until they're nice and smooth.

Now, in a medium heavy saucepan, combine the milk and half-and-half. Bring the mixture just to a boil. Remove the pan from the heat. Add half of the hot milk mixture to the sugar/cream cheese/egg mixture, while stirring constantly with a whisk to combine. This is to temper the eggs and not cook them from the heat of the milk.

Return this milk/sugar/cream cheese/egg mixture back to the saucepan with the remaining milk in it. Cook over medium-low heat for about 5 minutes, until the mixture reaches 160 degree when tested with a thermometer. Make sure you're stirring the whole time.

Now you'll want to cool the mixture by putting the pan in an ice-filled bowl. Stir occasionally. If you don't feel like making an ice bath, you can also just stick the mixture in the fridge... Just make sure you stir every now and then!

While the mixture is cooling, make sure your beautiful blueberries are all chopped. And in a small saucepan, combine the blueberries, confectioners' sugar, and water.

Bring to a boil and then reduce the heat and simmer for about 10 minutes. Let the mixture thicken a bit and stir frequently. Now set this mixture aside to cool as well.

Once both of your mixtures are completely cooled, you can stir the blueberry mixture into the milk mixture. I love that blueberry swirl!

Mix it all up and then chill in your fridge for about 3 hours.

When it's nice and cold, process it in your ice cream maker according to the manufacturer's instructions. When the ice cream is almost done churning, add the graham cracker pieces in.

Then put it in a separate container and pop it in the freezer, for about 2 more hours. I usually like to leave mine in overnight.

And you're ready to indulge. In semi-healthyish ice cream. Blueberry cheesecake ice cream that is basically the prettiest color ever ever. And doesn't taste lower-fat in any way, shape, or form.

Though the graham cracker pieces weren't in the original recipe, I kinda feel like they're crucial. They add an extra bit of sweetness and a little bit more substance to the dessert.

The moral of this story is, make this blueberry cheesecake ice cream. Make it for the 4th of July if you can because it's filled with summer and blue. Though the blue is obviously more of a purple. But who's keeping score?

Celebrate blueberry season while you can because it's going by much too quickly. And if for some (outrageously crazy) reason you don't like blueberries, try it with strawberries instead.

Or make both and be the most popular person at your 4th of July cookout. Red, white, and blue, represent.

Or don't bring this blueberry cheesecake ice cream with you to any parties because you're going to want the whole batch to yourself. But really, I only had to share with Chris and barely ended up getting any because he loved it so much. He claims it's the best ice cream he's ever had (can you even believe he's saying that about a lighter ice cream??).

What's the best kind of ice cream you've ever had? 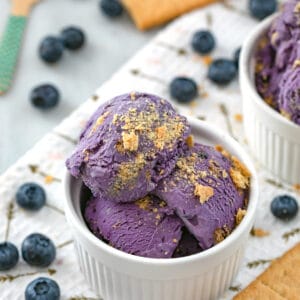