Instead of starting with a traditional roux, this Four-Cheese Mac and Cheese begins with a sauce made from Hood Cream, Hood Sour Cream, and cream cheese. Add in three more cheeses and the result is the creamiest most flavorful mac and cheese you've ever had!

Thank you to Hood Cream for sponsoring this post. As always, all opinions are 100% my own and I really appreciate you supporting We are not Martha!

When was the last time you learned something so cool that you knew your life would never be the same? OK, I may be being a tad bit dramatic, but last week I attended a cooking class put on by Hood Cream and Boston chef and brand spokesperson Chris Coombs and learned two things that are blowing my mind. Those two things are:

First of all, you've probably noticed that I've been working with Hood and several of their brands for a long time. If you're from New England, you definitely know the brand well and I hope they're your go-to when at the grocery store. I've always known that Hood makes the highest quality cream, but one reason this event was so cool was to hear well-known Boston chef, Chris Coombs (of restaurants Deuxave, dbar, and Boston Chops), talk about how it's the only cream he uses in his restaurants.

The other reason is because I learned so many useable skills. And I'm going to show you the secret to the best ever four-cheese mac and cheese in this post!

But first, the croquembouche! Do know what croquembouche is? As you can see in the below, it's a gorgeous holiday dessert. It looks like lots of little munchkin donuts piled on top of each other, but they're actually choux pastry balls piled into a cone with threads of caramel. They're often served at fancy events like weddings and baptisms in France. Like I mentioned, I've seen croquembouche before, but it never even crossed my mind to try and make one because it just looked way too complicated.

And, I mean, it's not exactly a quick and simple recipe. But it is definitely doable... And so worth it for the gorgeous results! Chef Coombs and his executive, chef Adrienne Wright (FYI she's going to be on the upcoming season of Top Chef!), did a little demo and then had us join in and get to work. They made all the cream puffs and showed us how to make the pastry cream and then had us whip the Hood Cream (by hand, no less!) and fold it into the pastry cream. Then we filled the cream puffs with chocolate, pumpkin, and vanilla pastry cream.

Then we used hot sugar/caramel to build either a wreath or a tree. I went with a wreath and it was so fun to decorate... But even more fun to eat the cream puffs in between building. So yes, there are a few steps to making croquembouche, but you don't have to do it all at once and the results are stunning. I'll definitely be making my own croquembouche at some point and will potentially blog about it, too! In the meantime, here's the one I created in the cooking class... how perfect is this for the holidays?? I'm pretty sure all your guests would be impressed with this on the table!

But today I'm blogging about the best mac and cheese ever.  OK, so typically when I make mac and cheese, I start with a roux made of milk/cream and flour... Just because this is how I was always taught and never thought to question it. But Chef Coombs showed us an even more delicious way. Instead of a roux, simply start with a sauce made of Hood Cream, Hood Sour Cream, and a little bit of cream cheese. He made it look so easy and the end result was so incredibl that I decided to make it at home.

But wait! There's an important first step... confit garlic. The recipe below shows you how to make a big batch of garlic (you only need 3 cloves for the mac and cheese), but you can keep it in your fridge for a couple months, so I recommend making it all. Literally all you do is sauté the garlic cloves in extra virgin olive oil over very low heat for about an hour. Try not to let it brown (my burners are all super hot for some reason, so mine did get a tiny bit brown).

Like I mentioned, the sauce starts with cream, sour cream, and cream cheese. Then you mix in THREE more cheeses (the fourth in the four-cheese mac and cheese is the cream cheese), some spices, and your cooked macaroni. The recipe calls for comté, gruyere, and gouda, which made for an excellent combination, but you can use whatever cheeses best suit your tastes.

Mix in a little hot sauce and some cayenne (more or less depending on how spicy you like it), fresh thyme, salt and pepper, and 3 cloves of the garlic.

Use an immersion blender to make the sauce nice and smooth. Then mix in the cooked macaroni. Whip up a quick panko topping, which is just panko breadcrumbs, butter, and parsley.

Put the mac and cheese in a casserole dish or in individual ramekins and top with a healthy portion of panko. Nope, you don't have to bake it or anything. It's just ready!

I love making my mac and cheese in ramekins because you can just grab out of the fridge and heat it up before digging into your individual portion. Serving it like this is also absolutely perfect for the holidays... Imagine how excited guests would be to get their own serving of mac and cheese? I've never actually made mac and cheese for a holiday dinner before, but now that I have this recipe, that might need to change!

Having these little ramekins of four-cheese mac and cheese in my fridge is heavenly and also a bit dangerous. I'm tempted to grab one at all hours of the day. Seriously, I was in bed the other night and almost got up to heat up one of these bad boys. Luckily, I stayed in bed and told myself I could have mac and cheese for breakfast in the morning. Whatever works, right?

And with that, here are some super useful tips from Chris Coombs about cooking with Hood Cream:

Don't forget to visit the Hood Cream website for more awesome recipes that are perfect for the holidays!

How do you use cream in your holiday cooking and baking? 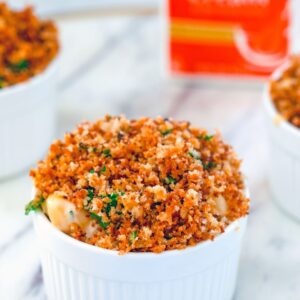 Instead of starting with a traditional roux, this Four-Cheese Mac and Cheese begins with a sauce made from Hood Cream, Hood Sour Cream, and cream cheese. Add in three more cheeses and the result is the creamiest most flavorful mac and cheese you've ever had!
No ratings yet
Print Pin Rate
Course: Entree
Cuisine: American
Keyword: Cheese, pasta
Prep Time: 30 minutes
Confit Garlic: 1 hour
Makes: 4 servings

Mac and Cheese and Assembly