If you've seen everyone talking about Gigi Hadid Pasta and are wondering exactly what it is, I'm thrilled to share the recipe with you! The celebrity model made her spicy vodka pasta recipe go viral on Instagram and it's an absolutely delicious and easy dinner recipe you'll want to make over and over again.

Am I really sharing a pasta recipe from a supermodel? Really? Yes. I am. But I promise this is a good one.

She may be a world renowned model, clothing designer, and mom, but Gigi Hadid also loves cooking. She's even been on the FoodNetwork show Beat Bobby Flay. She also occasionally shares her favorite recipes via her Instagram Stories, as well as her adventures in cooking. You know, alongside her incredible business ventures and fabulous fashions.

Her pasta recipe, which she made during quarantine, quickly became a fan favorite as it went viral on TikTok and beyond after she shared it on Instagram Stories. And Gigi Hadid Pasta has become one of my favorites, too! I love making it for a quick and easy weeknight dinner.

❓ What is Gigi Hadid Pasta?

Though many now refer to it as "Gigi Hadid Pasta," her recipe is actually for a spicy vodka pasta.

It consists of a super easy-to-make tomato vodka sauce with lots of red pepper flakes (though you can leave them out if you wish) and parmesan cheese, tossed over pasta.

Gigi refers to it as a spicy vodka sauce, but she actually didn't use vodka when she made this for her Instagram Stories. She didn't say so, but she was actually pregnant at the time and didn't want to use it.

Not only is this pasta recipe easy, but it's also incredibly versatile. It's absolutely delicious as is as a vegetarian pasta dish.

But there are also lots of ways to jazz it up, including adding meat and/or vegetables. And even though "spicy" is in the name, you can easily turn it into a simple tomato vodka pasta by omitting the red pepper flakes.

It's the kind of dinner you can make in a snap on a weeknight. Your family will love it and you may even have some fabulous leftovers for lunch or dinner the next day!

I decided to double Gigi's recipe since hers serves 2 and I wanted at least 4 servings... But when doubled, this recipe really makes about 6 servings (at least in my opinion). And trust me when I say it makes for great leftovers!

Here's everything you need for the pasta (please see recipe card below for ingredient amounts and recipe instructions):

🍝 What shape pasta to use?

You can really use any pasta shape you want! Gigi uses small shells, but I swapped those out for orecchiette because it's my favorite pasta (and pretty similar to a shell).

I like using shapes that have little nooks and crannies because the sauce gets trapped in them and is absolutely delicious!

But you can also easily use spaghetti or linguine. Oh, and the sauce would also be absolutely awesome on ravioli.

I recommend starting to cook the past first so you can get going on the sauce while the water comes to a boil and the pasta cooks.

Bring a large pot of lightly salted water to a boil. Cook pasta according to package instructions. When draining, be sure to reserve about ½ cup of pasta water as you'll want this for the sauce.

While you're waiting for the water to boil and pasta to cook, add olive oil to a large skillet over medium heat.

You'll need ½ cup olive oil for this recipe and while it may seem like a lot, it ends up being perfect. However, if you want to use a little less, the final dish will still be great.

When oil is hot, add shallot or red onion and cook until it begins to soften, about 5 minutes.

Gigi says you can either use shallot or red onion. She calls for ¼ of a shallot (which is a super tiny amount!), but also said she used a little less than ¼ of a red onion.

I opted to use about ½ cup of diced red onion, which is a little less than ½ of a medium onion.

Add garlic and cook until fragrant, about one minute. I used 1 ½ tsp of minced garlic.

Now you're ready to add the tomato paste.

Stir it in and let it cook for 3-4 minutes until it's starting to brown/caramelize a bit.

And now it's time to add the vodka! Don't worry; you only need 2 Tbsp.

And if you don't have any or opt not to use it, the sauce will still be delicious. I just think it adds a really nice depth of flavor. Much of the alcohol burns off when cooking (though not all of it).

Gigi added 1 tsp of red hot pepper flakes, but using 2 tsp in my sauce, seemed like A LOT. And that's coming from someone who loves spice!

So, I recommend using 1 tsp for this double recipe. However, you can add more or less as you choose. If you have family members who don't like spice at all, leave the pepper flakes out and add them on to the finished plates of those who want it.

Stir to combine and then remove skillet from heat.

Now you're ready to toss the pasta in the sauce!

Add cooked pasta, ½ cup reserved pasta water, and butter to the skillet and toss to coat pasta in sauce.

You want the pasta to be really well coated in the sauce.

Stir in parmesan cheese, too.

And serve the Gigi Hadid pasta topped with additional parmesan and chopped basil.

Doesn't this just look perfect? The sauce is such a gorgeous color and has the most ideal amount of creaminess to it. The red pepper flakes help add some spice and the basil a little freshness.

And it's packed with flavor! I love how deep and robust tomato paste is in the tomato vodka sauce and the flavors of it really shine here, but are also nicely balanced by the slightly salty parmesan.

The vodka adds even more depth to the sauce, but like I said, you don't have to use it if you don't want. Remember you can also modify the amount of spiciness in the dish based on your family's preferences.

It's called spicy vodka pasta, but it doesn't have to be spicy if you leave the red pepper flakes out!

Obviously Gigi Hadid shared this pasta recipe as she did because it's perfection! But that doesn't mean you can't make some adjustments to suit it to your tastes and dietary needs.

There are a lot of things you can add to the pasta to make it a more complete meal... I've made it before with ground Italian sausage and it's awesome. Here are some ideas for what you can add:

If you make Gigi Hadid Pasta, let me know what you add to it or how you make the recipe your own!

If you have leftovers of the spicy vodka pasta, you can easily store them in an airtight container in the fridge for 2-3 days.

⏰ How to make in advance

You can also make the tomato vodka sauce in advance if you want. Just cook through step 5 (in the recipe card below) and then store the sauce in an airtight container in the fridge for about 5 days.

When ready to use, add to skillet and re-heat before cooking pasta and tossing pasta, reserved water, butter, and parmesan cheese in sauce.

Alternatively, you can make the sauce through step 5 and then freeze it for a later date. I recommend putting the sauce in a large Ziplock bag with the air removed, but you can also keep it in an airtight Tupperware container.

When frozen, the sauce should keep for about 6 months. Thaw completely before re-heating for use.

🥗 What to serve with

I love serving simple pasta dishes with salads. This Chopped Kale Salad would be perfect, as would this Greek Kale Salad (can you tell I like kale??). But I also wouldn't turn down a Brussels Sprouts Bacon Salad either.

Of course, it goes really well with a delicious garlic bread as a side. But a simple vegetable side also works, like this Lemon Pepper Asparagus or these Bacon Parmesan Brussels Sprouts.

Whether or not you're a Gigi Hadid fan, I highly recommend trying her spicy vodka pasta. Something tells me it will quickly be added to your regular dinner rotation! 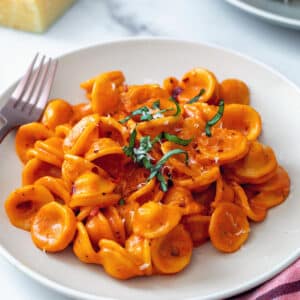 View web story for this recipe. 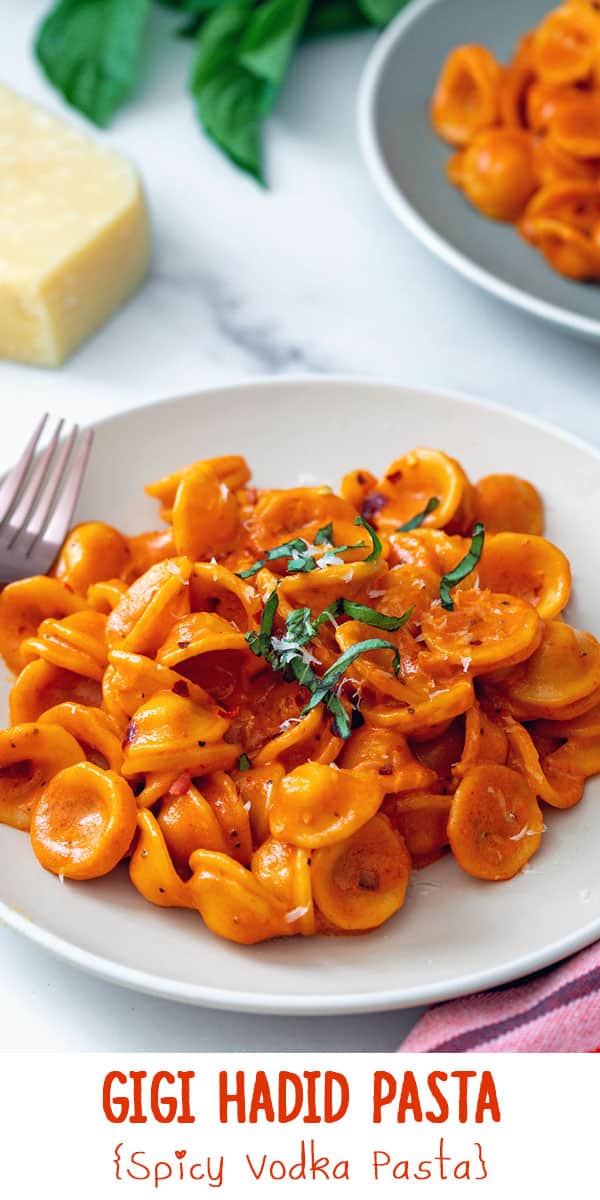