Craving a pizza night at home? This Cast Iron Skillet Pizza is incredibly easy to make and results in a super light and crispy crust. Whether you use a store-bought dough or my simple dough recipe, this pizza will quickly become a favorite in your house!

Even though I just made this pizza for the first time a few months ago, it's quickly becoming the blog recipe I've made more times than any other in my kitchen.

First I went through the recipe testing process and it took a lot of tries to get this cast iron skillet pizza exactly how I wanted it. And then once I had it exactly right, it was so good, I wanted to make it all the time. And, so, I have been.

We now eat this pizza at least once a week in my house. And honestly, I crave it even more than that.

I love almost all pizza and am generally especially partial to flatbread or thin crust pizza, but I am all about this thicker crust cast iron skillet pizza at the moment!

I am and have always been a thin crust pizza person. But for some reason, this cast iron skillet pizza has been my jam. It's definitely not a "deep dish" pizza by any means, but the crust is thicker... While also being light and fluffy.

You can use any cast iron skillet for this recipe, but I highly recommend this

. I've had it for years and always have great results with it. And it's pretty non-fussy, too. I season it on occasion and take care of it, but for the amount I use it, I don't have to put too much thought or energy into it.

The ingredients for this pizza are pretty standard. The recipe is for a pepperoni cast iron skillet pizza, but you can certainly add on any toppings you want! Here's what you need:

Trust me when I say making your own pizza dough is incredibly easy. Baking with yeast can seem a bit scary, but in my opinion, the hardest part is when you have to roll dough out and there's no rolling involved with this recipe. Here's what you need for the dough:

How to Make Homemade Dough

Make this homemade pizza dough once and you'll never want to use store-bought again... It's so easy!

Simply, mix yeast and lukewarm water in a large bowl and let rest for 2 minutes.

Then stir salt, sugar, and extra-virgin olive oil into the mixture.

With a wooden spoon, mix the 1 ½ cups + 2 Tbsp flour and garlic powder into the mixture. You don't have to add the garlic powder if you don't want to, but I love the extra flavor it gives the dough!

If dough feels too wet, you can add in another Tbsp flour

Form dough into a ball and place on the bottom of a bowl with a kitchen towel over it.

Let rest in a warm spot for about 2 hours. Dough should rise during this time.

I love uncovering my bowl and seeing the magic of risen dough!

Now your dough is ready to be turned into a pizza!

How to Make Dough in Advance

You can use the dough right away if you want, but you can also make it in advance for later use.

If you're not planning to use the dough the day you make it, tightly wrap it in plastic wrap and store it in the fridge. It should keep for 7-10 days when stored correctly.

In my opinion, cast iron skillet pizza is one of the easiest kinds of pizzas you can make at home. The main reason? You don't have to roll the dough out! You just put it in the skillet, coat it in olive oil, and press it to the edges.

Preheat oven to 500 degrees and put olive oil in the skillet. Tilt the pan and use a pastry brush or paper towel (or your fingers) to spread the oil around the entire pan and up the edges.

About 20 minutes before you're ready to bake the pizza, put dough in skillet and flip it once to coat both sides in olive oil.

It should look similar to this:

Now you're ready to sprinkle on a layer of cheese.

I like adding cheese on before the sauce because it prevents the pizza from being soggy and results in a crispier pizza, which is especially important to me when the crust is a bit thicker.

Don't worry, I add a little bit more cheese on after the sauce, too. But if this order isn't your preference, you can add your ingredients on any way you want.

Now add spoonfuls of the sauce over the cheese. I recommend starting with ½ cup and if you're a real sauce lover, increase to ¾ cup.

You can keep the sauce in dollops, but I like using a little spatula to spread it around.

Now add on the pepperoni in an overlapping fashion. If you were to order this pizza at a restaurant, it would be an "extra pepperoni" pizza.

You can obviously add less... Or more if you can somehow fit more on!

Then sprinkle the last ¼ cup of shredded cheese over the pepperoni.

Cheese under the sauce and above it? It doesn't get any better than that!

Put the skillet in the oven at 500 degrees and let it cook for 16-20 minutes until the cheesy is bubbly and crust is turning golden. The range is so big because all ovens are a little different and everyone likes their pizza a little different.

I recommend checking it after 16 minutes by carefully lifting the pizza with a metal spatula and peeking the bottom of it. If it's nice and golden to your liking, remove it. Otherwise, cook it longer.

I've been experimenting a lot and have had learned I like my pizza extra crispy, so I almost always cook it the full time. However, Chris likes it less crispy, so if I want him to be happy, I give it a little less time.

Use a pizza cutter or a big knife to cut the pizza.

This recipe technically serves 4... But I'm going to be honest and tell you that Chris and I often eat an entire one by ourselves for dinner. And if we had a family of 4, we might just have to make another because I don't think I'm willing to give any up!

One of the reasons I love this cast iron skillet pizza so much is because the crust is thicker than the typical pizza, but still super light and crispy.

If you're looking for a "floppy" pizza, this isn't it. There' s a lot of structure to each slice and it has the best "chew" to it.

This is pretty much my dream pizza from top to bottom, but that doesn't mean I don't change it up from time to time... And you can, too! Here are some ideas:

Once you have the base of the cast iron skillet pizza down, the options are endless and you really can do so much with it. Making it totally acceptable to have homemade pizza at least once a week.

Though this cast iron skillet pizza has been my pie of choice for the past several months, I still have lots of room for pizza love in my heart and have many other go-to at-home favorites. Here are some of the best:

I'm almost kind of tempted to have a pizza month where I just make a different pizza every day for dinner.

But I'd probably make my cast iron skillet version every other night.

I hope this recipe makes you fall in love with a whole new kind of homemade pizza! 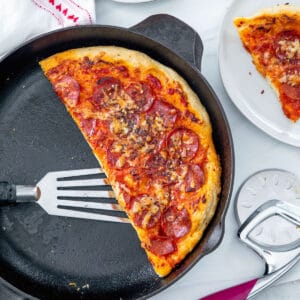 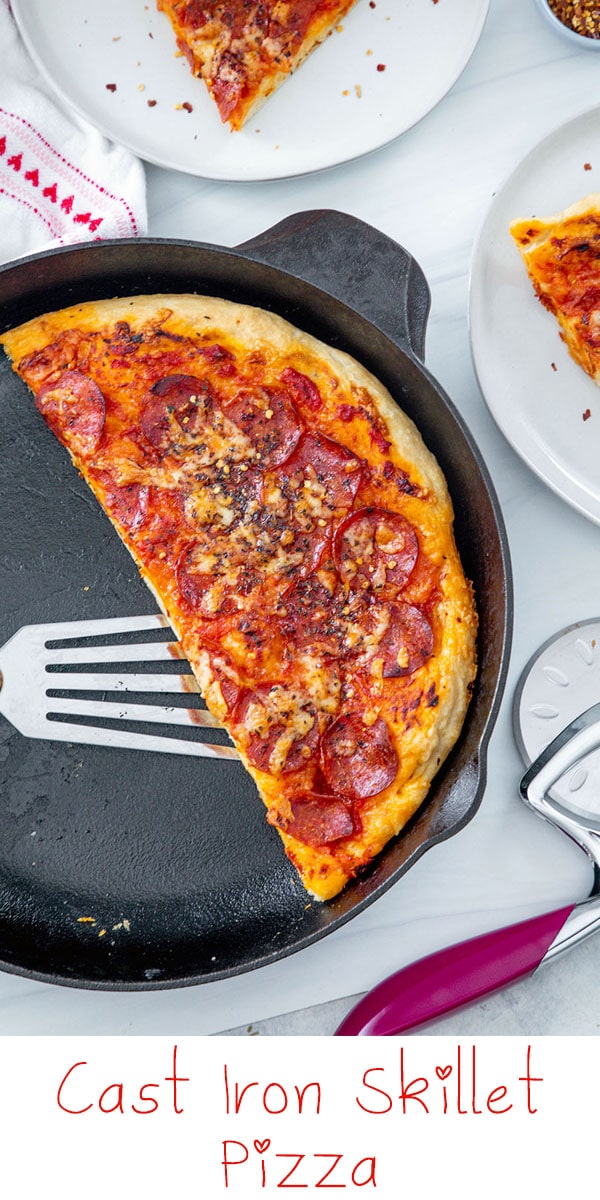