You can't beat desserts that combine pumpkin and chocolate and these Pumpkin Swirl Brownies mix them in the prettiest way!

(This recipe for Pumpkin Swirl Brownies was originally published in October 2008, but was updated with new photos in 2018).

In keeping with the popularity of all things pumpkin on We are not Martha, I decided to immediately make these Pumpkin-Swirl Brownies when I found them on Martha's website.

Not only did they look fantastic but I loved the idea of creating the swirls between the layers! So gorgeous!

I switched the recipe up a bit and was super happy with the results. I can't get enough pumpkin in the fall and adding chocolate in makes that pumpkin even more delicious!

These brownies are way fancier than your typical pumpkin brownies. But that doesn't mean they're difficult to make!

The batter base has a touch of cayenne in it, but don't be scared by this! You won't really taste it, but it adds a snazzy little kick.

For the chocolate batter, you'll start by melting chocolate and butter. And then mixing that into the second bowl of batter.

Bake away and enjoy how amazing your house or apartment will smell. I made these late night and was so happy to wake up the next morning with my kitchen still smelling like pumpkin...

And these pumpkin swirl brownies waiting for me for breakfast. Not even kidding.

I used an 8-inch square pan and you can see how deliciously tall they are. If double decker brownies are too much for you, feel free to use a 9-inch pan. But I love this height!

I also love the way pumpkin and chocolate are a match made in heaven. And how the pumpkin portion of these brownies is a little bit gooey and the chocolate portion is nice and fudge-y.

With the perfect swirl on top!

Pumpkin Swirl Brownies are also the kind of treat your neighbors and co-workers will seriously appreciate, so don't be afraid to package them up and share the love. They also make the perfect bake sale treats!

But really, if you bring these to the office, I have a feeling they'll disappear in just minutes. Even at 8 a.m. Pumpkin is healthy, so totally justifiable for breakfast, right?

Here's to another wonderful pumpkin dessert recipe... I have a feeling this one will become the kind of seasonal recipe you'll want to make again and again.

If you're looking for more pumpkin dessert recipes, be sure to check out these No-Bake Pumpkin Cookie Dough Bars and this Sour Cream Pumpkin Pie Bundt Cake. Next, I really want to make these Pumpkin Muffins from Dinner at the Zoo! 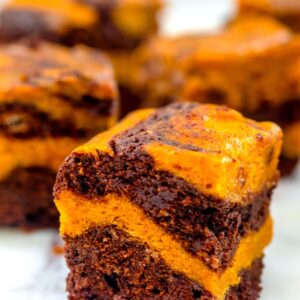