These Red Velvet Marshmallow Peeps Cupcakes are the perfect Valentine's Day dessert. Who says Peeps are just for Easter?

Have you ever met a more polarizing candy than Peeps? People get passionate. Really passionate. Personally, I don’t understand how you can’t love Peeps… They are marshmallows covered in sugar. I repeat, marshmallows covered in sugar. There is absolutely nothing not to love about that. Right?? The good news for Peeps lovers is that there are now basically  Peeps for every holiday. From the original Easter to Halloween to Christmas and now to Valentine’s Day.

In case you haven't seen any of my other Valentine’s Day posts, this day of love is pretty much my favorite holiday because of how freaking pretty it is. Love pink and red, love hearts, and love love. Swoon. Yes, I know it's a crazy commercialized weirdo holiday, but that doesn't mean I can't obsess over baked goods and decorations.

And I'm not going to lie that the addition of Peeps to the holiday is making me pretty thrilled. I was also thrilled when they offered to send me a little care package filled with plenty o' Peeps.

And more. They went all out. Which is the only way to go.

Did you know I’ve never made a red velvet cake before? I’ve just never been one of those crazy omg red velvet is the best thing in the world type people. But in honor of Valentine’s Day and pretty red Peeps, I decided it was time to go for it. Though I was planning to top each cupcake with a Peep, I didn’t want to stop there. So I filled each cupcake with homemade marshmallow fluff and and drizzled a little chocolate ganache on top. Best Peeps cupcakes ever.

LOVE the bright red color. Even if it is from food coloring. My red gel food coloring said on the lid “no taste red,” which I guess is a good thing?

You can make the fluff while the Peeps cupcakes are baking. You could also buy the fluff while the cupcakes are baking. But I promise that making it is easy. I cut my usual recipe in half so you wouldn't be left with a huge bowl of leftover fluff (actually, I didn't in real life and I WAS left with a huge bowl of leftover fluff, but I figured I'd spare you. Not that it's exactly a bad thing). You only need so much to fill a cupcake up!

If you're in the market for a good cupcake corer (so much easier than using a knife!), I recommend this one from Cuisipro (affiliate link!).

You can pop it in the fridge to chill a bit while you're finishing things up. Like the chocolate ganache. Which is another really easy recipe. You simple pour hot cream over a bowl of chopped chocolate. Done and done.

Once your cupcakes are cored and filled with marshmallow fluff, just drizzle some chocolate ganache over the top... And then pop a Peep on it!

Is that kind of like putting an egg on it? Maybe except the chicken came first. Or the Peep came first. Hmmm.

I was slightly disappointed this cupcake wasn't a bit more vibrantly red... I guess next time I'll need to use a touch more food coloring. That batter was so ridiculously red though!

At least the Peeps on top for the perfect shade of red.

And yes, they really are strawberry flavored. Which was a pretty awesome depart from the typical original marshmallow flavor.

If you're a Peep hater, please just promise me you'll give them another try. Maybe having them on a cupcake will make a difference? I think it will. Especially with that little bit of chocolate on both the Peep and the top of the cupcake. Of course you could make these cupcakes with a different kind of Peep, another kind of candy, or no topper at all, aside from the delicious chocolate ganache.

But really, cupcakes and Peeps? Who needs love this Valentine's Day when you have these? Just kidding, love is nice, too. Except when you only have one Peeps cupcake left and you're just not in the mood to share it.

Are you a Peeps person? Which new Valentine's Day Peeps will you be trying this holiday? 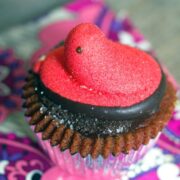