Eggnog season is so short, you need to take advantage of it while you can! These Eggnog Cupcakes have a little surprise inside… a peanut butter cup! They’ll make you realize that eggnog and peanut butter (with a touch of chocolate) make an amazing combination! 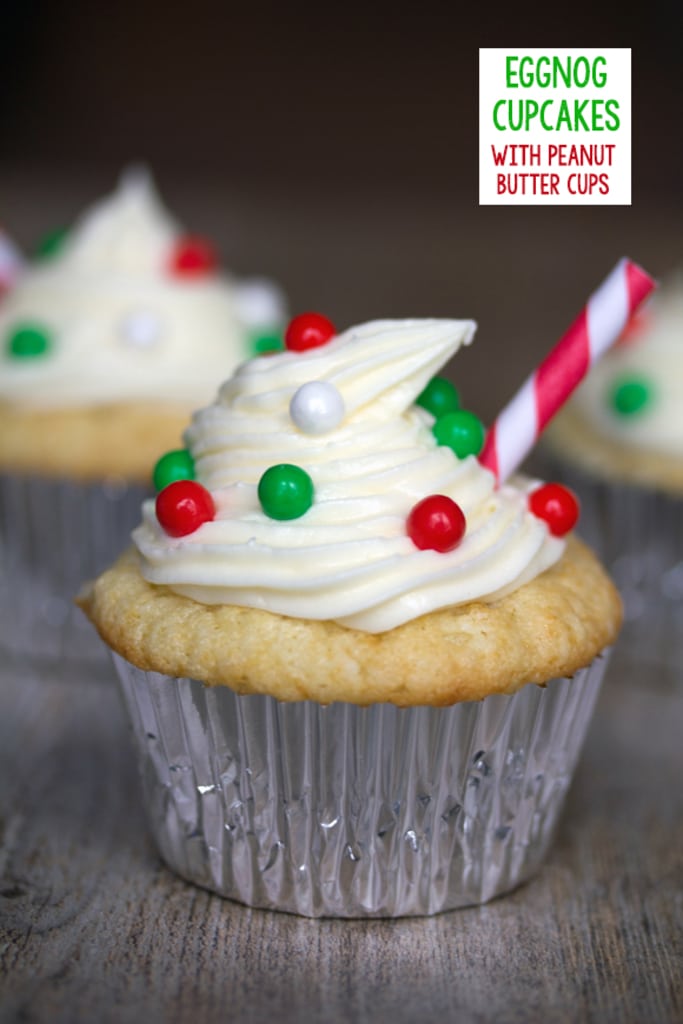 You guys, I am JUST getting into holiday cooking and baking annnnd the season is practically over. I mean, can anyone make it slow down just a little bit? Please? My fridge is stocked with cranberries and eggnog and my pantry is filled with candy canes and other holiday delights. I legit have a billion things to bake before December 25, which is, by the way, next week. WHAT? And help.

I did have time to make these glorious eggnog cupcakes, which just happen to have chocolate peanut butter bells hidden inside them. Because I’ve been really into the idea of eggnog and peanut butter together this holiday season. I almost made a peanut butter frosting for these, too, but decided the beautiful Christmas decorations just wouldn’t look that pretty on a brown frosting. So, I made an eggnog packed frosting that was, I think, a pretty great decision.

These cupcakes are packed with holiday cheer and will have you wishing we could celebrate this season just a liiittle bit longer. Can we make eggnog a year-round thing already?

So, maybe you think that eggnog and peanut butter is an odd combination. But I promise you, it’s not! The little peanut butter cup is such a fun surprise to find in an already delicious eggnog cupcake and the peanut butter and chocolate flavors add a little bit of richness to the light and sweet eggnog flavor.

The eggnog cupcakes are easy to prepare and just involve one little twist to the batter when it comes to blending in the eggs (spoiler alert- I only use egg whites and beat them into stiff peaks before folding them into the batter).

To start, in the bowl of a stand mixer or in a large bowl with a hand mixer, beat together butter and sugar  until light and fluffy, 2-3 minutes. In a separate bowl, whisk together flour, baking powder, and salt.

Mix the dry ingredients into the mixer with the wet ingredients, alternating with the eggnog, until just combined. The batter will be quite thick, but take care not to over-mix.

Here’s where the egg whites come in! I found that this method (originally learned here) makes for the lightest, fluffiest cupcakes ever. It’s super easy to do, but does require dirtying another bowl (though you could easily just wipe out the bowl you whisked the flour in and beat the eggs in there). Anyway, you simply want to beat the egg whites until stiff peaks form.

And then fold those stiff egg whites into the batter. Make sure to fold well so all egg whites are incorporated. 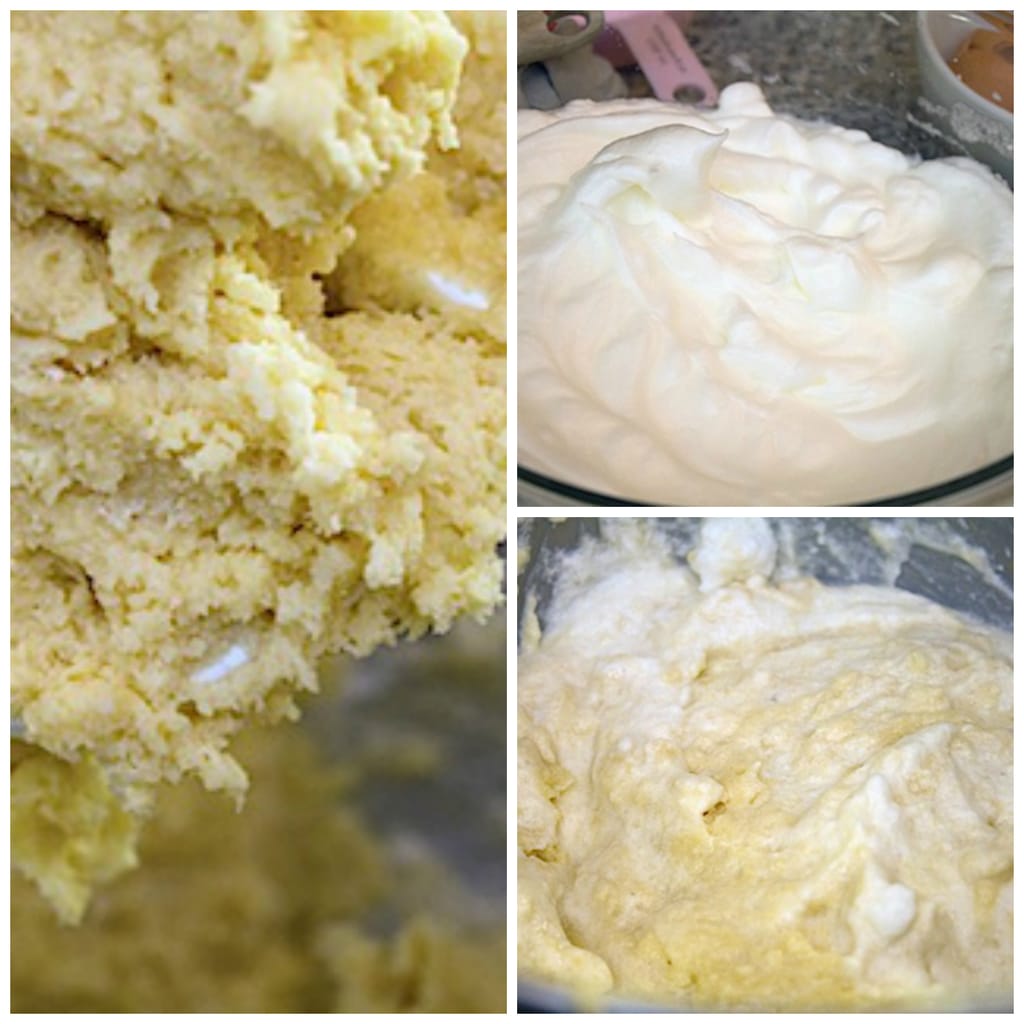 Now, fill the cupcake tins (fitted with cupcake papers) with batter almost all the way to the top and then press a little chocolate peanut butter candy into the batter.

Smooth batter over the top of the candy.

And bake at 350 degrees for 18-20 minutes, until the cupcakes are just beginning to turn golden around the edges. Let them cool in the pan for a few minutes before moving to racks to cool completely.

The frosting is easy to whip up!

In a large bowl with a hand mixer (or in a stand mixer), mix the butter and confectioners’ sugar until fully incorporated. Mix in eggnog until desired consistency is reached. Try not to eat it all with a spoon. Or your finger. 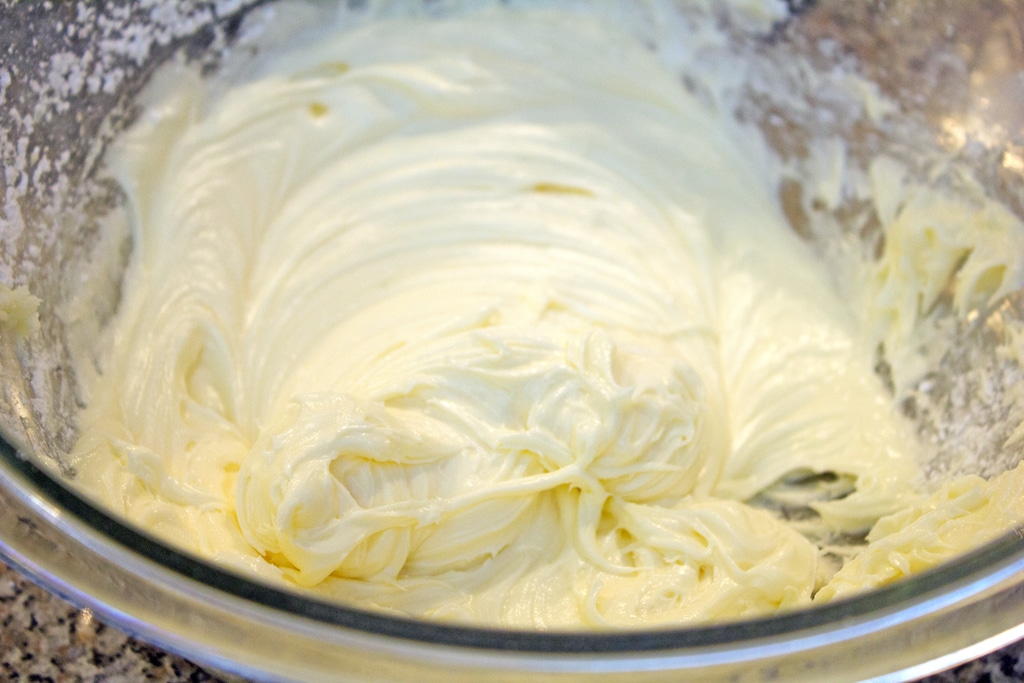 I did a simple swirl and then topped with festive Celebration Pearls. And a little straw for sipping up all that eggnog, of course!

I was kind of proud of myself for making an eggnog baked good and not putting rum into it. I came *this* close, but restrained myself.

Good decision or bad decision? I’m not positive. But I do know that the taste of eggnog in these cupcakes was perfectly pronounced. And I figured with the peanut butter cup hidden inside, there were already enough flavors going on.

You forgot about the peanut butter cup, didn’t you? Well, you would have quickly remembered when you broke into these. 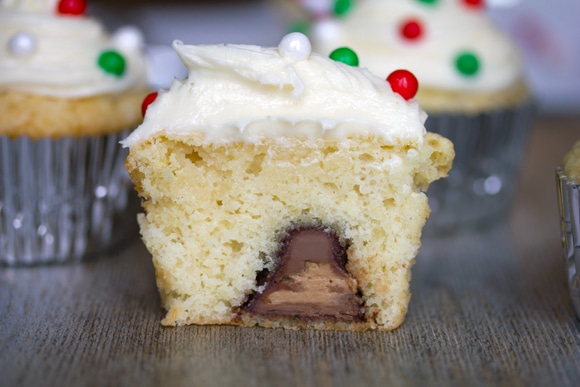 I thought it was just the right amount of chocolate and peanut butter. And now I’m seriously dreaming of a chocolate peanut butter eggnog milkshake. Is that wrong? And will Chris kill me if he comes home to find I have drunk all of his precious eggnog? 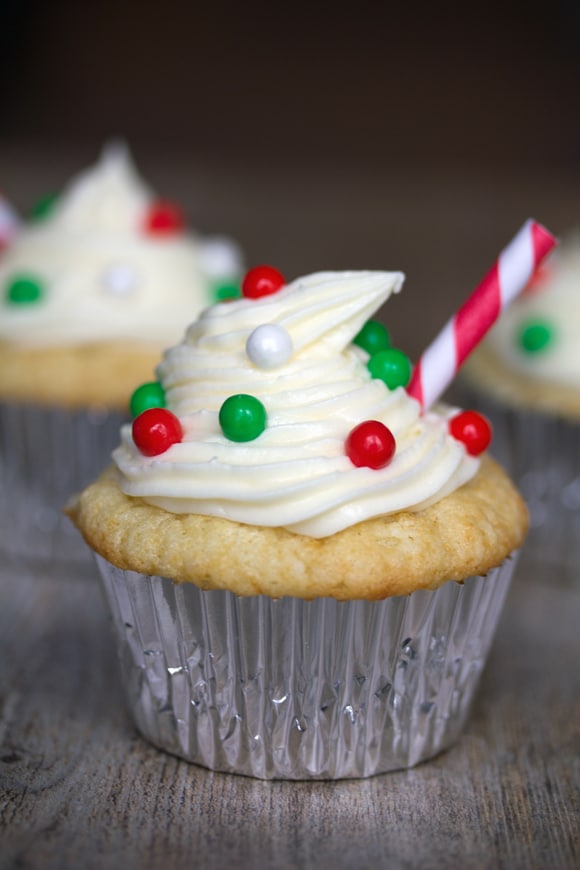 It might be worth it. After all, I’m going to need a little something to wash these eggnog cupcakes down! Plus, I think he’ll forgive me when I hand him one of these!

What holiday treat do you love best?

To keep eggnog season going, try my Eggnog Overnight Oats or my Spiked Eggnog Doughnuts. And if you’re loving the idea of eggnog and peanut butter together, try this Peanut Butter Eggnog Milk Tea from The Omnivore’s Cookbook! 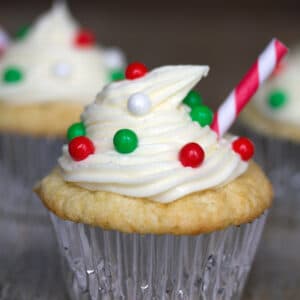 Eggnog season is so short, you need to take advantage of it while you can! These Eggnog Cupcakes have a little surprise inside... a peanut butter cup! These will make you realize that eggnog and peanut butter (with a touch of chocolate) is an amazing combination!
Prep Time15 mins
Cook Time20 mins
Total Time35 mins
Course: Dessert
Cuisine: American
Keyword: Christmas Desserts, Eggnog Desserts, Eggnog Recipes, Holiday Cupcakes, Holiday Desserts
Servings: 20 cupcakes
Author: Sues