This Tipsy Rhubarb Ice Cream Soda takes a brilliantly pink rhubarb simple syrup and combines it with vodka, vanilla ice cream, and soda water for a delightful summer treat. Feel free to leave the vodka out to skip the "tipsy" part. 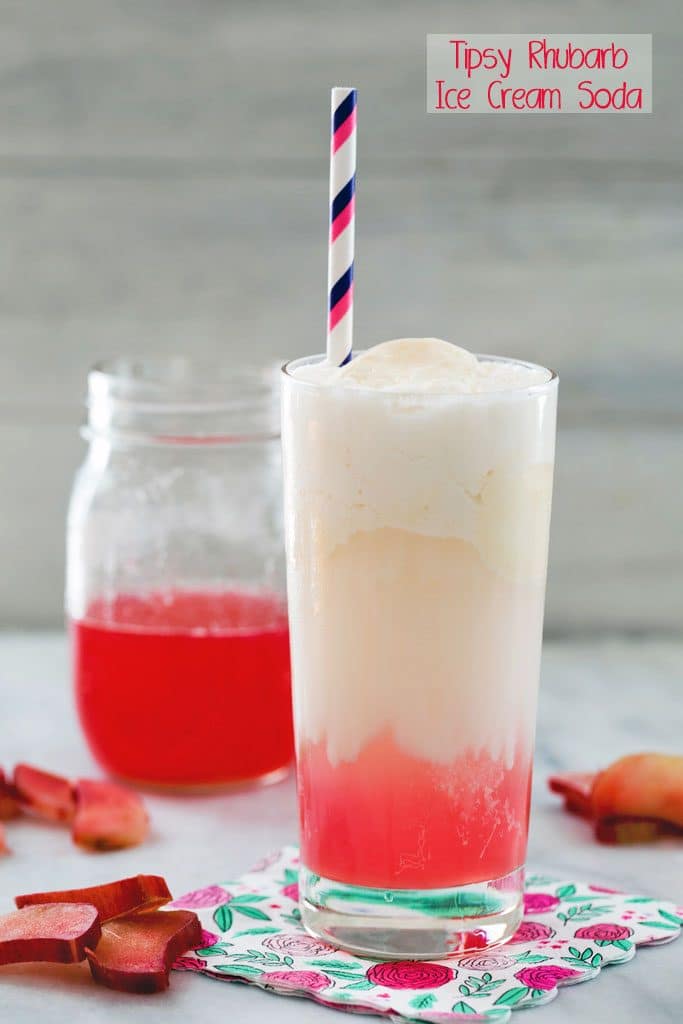 (This recipe for Tipsy Rhubarb Ice Cream Soda was originally published in September 2014, but the post has been updated with new photos and content.)

Rhubarb and I have quite a sad history together. Actually, I should say rhubarb and I essentially have no history together. This drink slash dessert is literally the only thing I've ever made with rhubarb. BUT that doesn't stop me from saying at least 35 times per spring/summer, "omg I'm totally going to cook and bake with rhubarb all the time this year!" And then I never do. And look at me now... I finally have a bundle of rhubarb and I'm re-making a recipe that I first made in 2014. But the thing is, rhubarb and I need to spend a little quiet 1:1 time together getting to know each other. I'm slightly uneasy around rhubarb, I'm definitely a bit confused by rhubarb, and I'm still kind of getting a handle on how I really feel about it. This Tipsy Rhubarb Ice Cream Soda is like training wheels for rhubarb and I'm OK with that.

Can we all please start by admitting that rhubarb is totally weird?? Does anyone really know what it is? Let's talk about it.

While I often refer to rhubarb as "celery's fun cousin," it's not actually in the celery family and is instead part of the Polygonaceae plant family (along with sorrel, buckwheat, sea grapes, and some pretty nasty weeds). Though rhubarb has been used in Chinese medicine for thousands of years, utilizing rhubarb as food is a relatively new innovation, starting in 17th-century England. The stalks are the edible part of rhubarb and the leaves should be avoided due to their high levels of oxalic acid. If you've ever tried rhubarb plain, you know that it's extremely tart and generally needs a bit of sugar. In fact, in some countries, kids are given rhubarb stalks dipped in sugar as a fun little treat.

Knowing that sugar is generally needed in the preparation of rhubarb, I thought, what could be better than a rhubarb simple syrup? This allows you to get the full flavor of rhubarb, without covering it up with other flavors. If you're a rhubarb newbie, this is a great way to get a feel for how it tastes.

You make the rhubarb simple syrup the same as you would any other simple syrup; it's just sugar, water, and chopped rhubarb. Let it simmer for about 10 minutes and then strain the liquid from the mushy rhubarb. I was about to throw that mush away, but then I tasted it and omg it was so good! It tasted just like applesauce would... Rhubarb applesauce for the win! 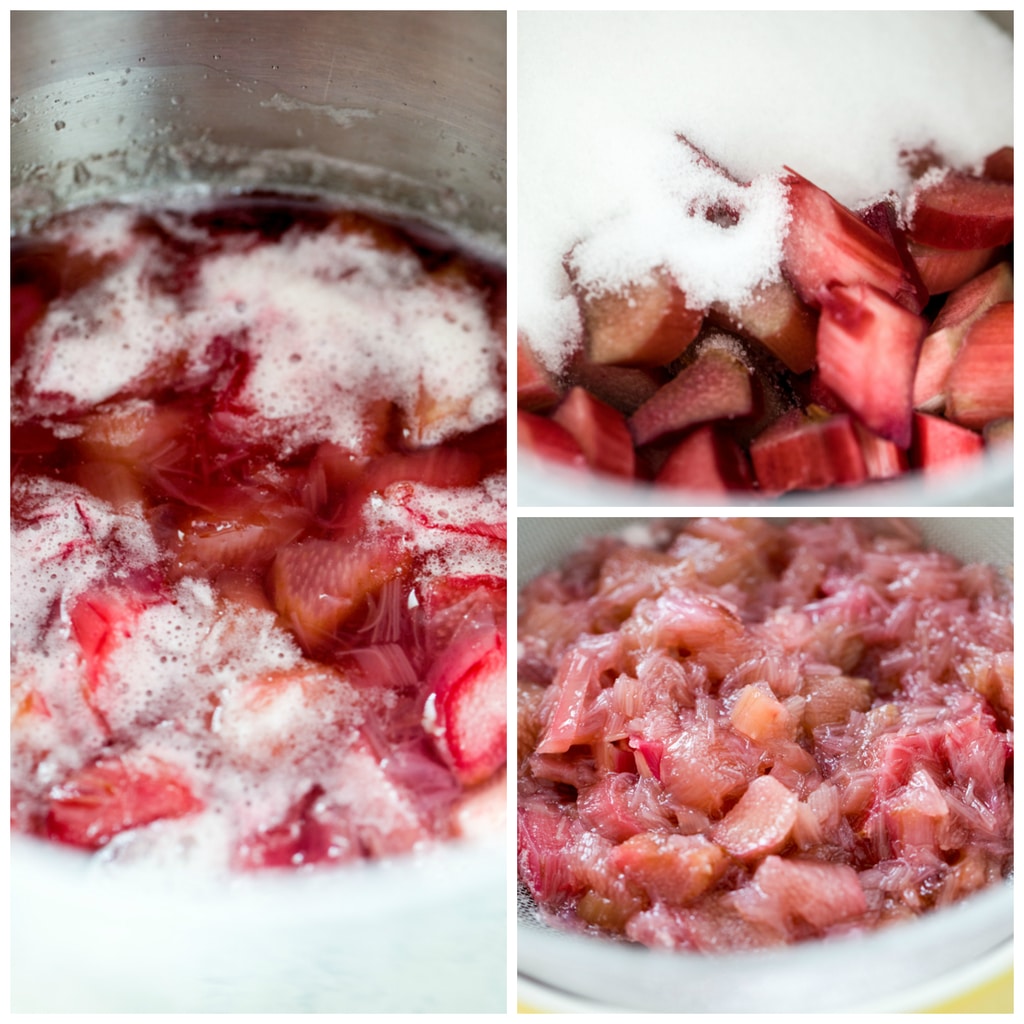 As you probably guessed, I’m pretty much in love with the hot pink color of this rhubarb simple syrup. I want to keep a jar of it in my fridge for all time. Did I mention I want summer to last forever? 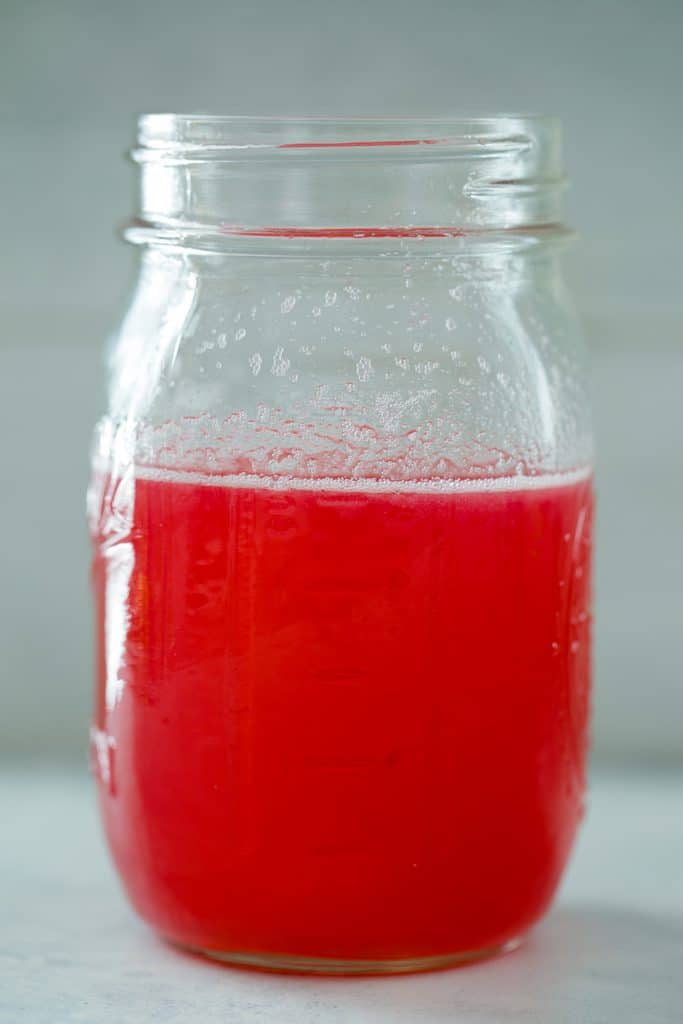 The rest of the cocktail prep is super easy as most of my drink recipes are. Pour the simple syrup and vodka into two glasses and then add a couple small scoops of ice cream. 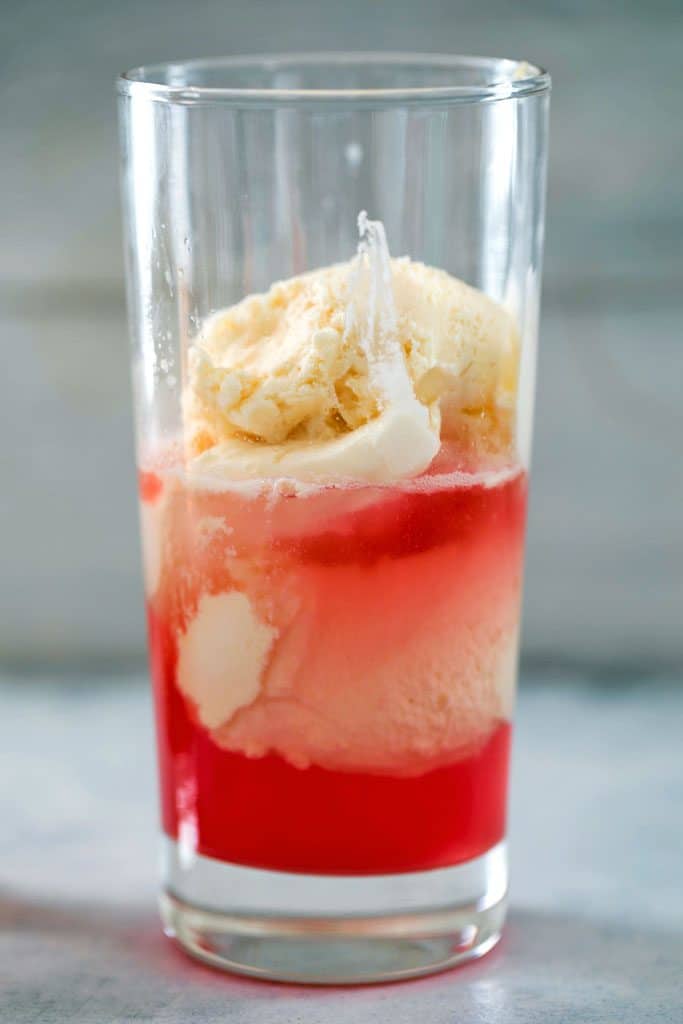 And fill the rest of the glasses up with soda water. Until they're practically overflowing. Because it’s pretty much a necessity that an ice cream soda overflows. 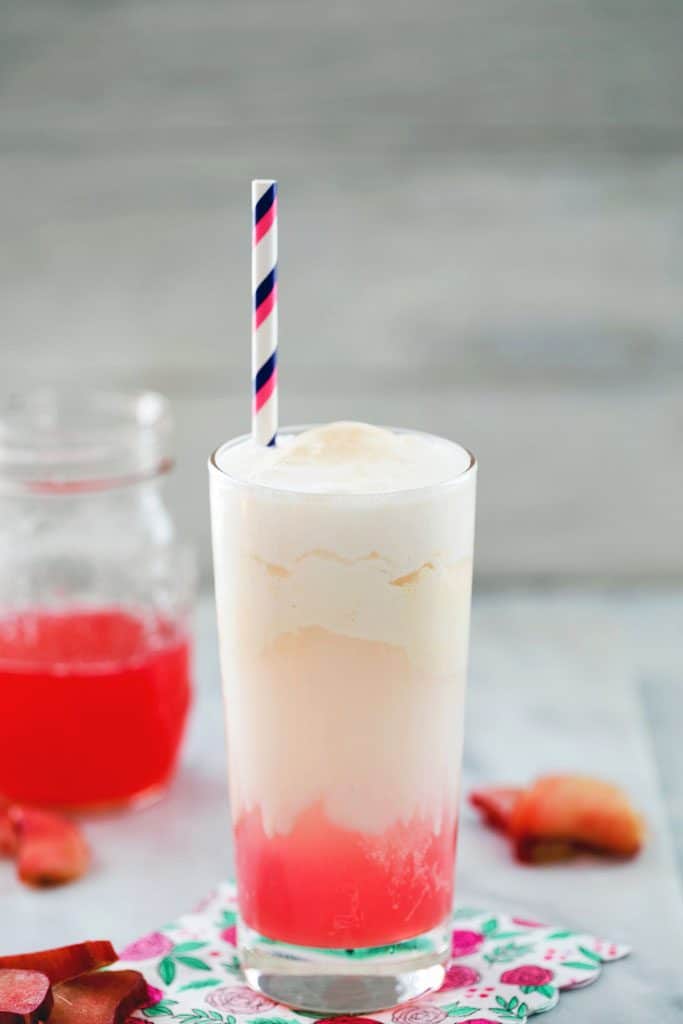 And I would call my first foray into rhubarb a success. OK, so technically this is my second foray considering I'm re-making this recipe. Just four years in between my two rhubarb experiences? I really can't let that much time go by again. The thing is... rhubarb isn't my absolute favorite fruit/vegetable of all time and there are a million other pie flavors I'd choose before a rhubarb pie. But this rhubarb simple syrup? It is pure delight! And I know there are more ways I can experience rhubarb that will likely help me fall in love with it. 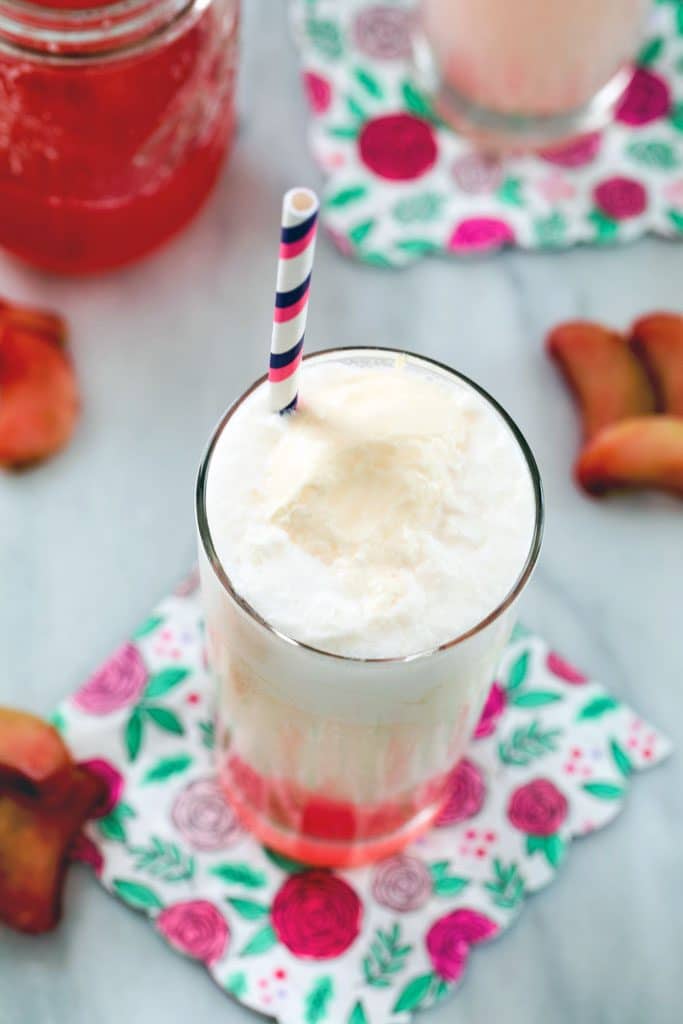 This ice cream soda is kind of like a rhubarb creamiscle. Since the simple syrup is basically just combined with vanilla ice cream, it's perfect for getting the flavor of sweet rhubarb with nothing to mask it. But oops, I almost forgot that there is vodka in this little ice cream soda. Hence the "tipsy" part of the title. Obviously you can leave the vodka out if you want a virgin ice cream soda or will be serving it to kids... But the vodka makes this ice cream soda a little bit more fun, especially as we enter the glorious days of summer. Plus, I kind of think there's something about rhubarb that screams, "I need vodka! Give me vodka!" 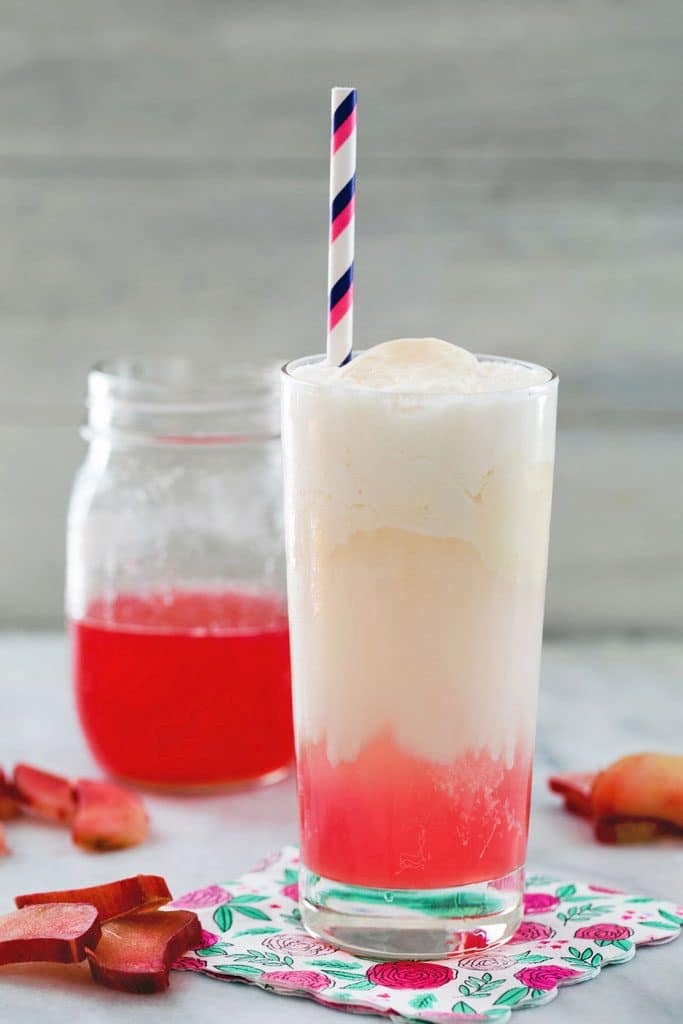 Luckily, rhubarb is in season until September, so I should be able to get a few more rhubarb recipes in over the next few months. But something tells me this rhubarb simple syrup will also be made again... Because yes, I absolutely need a jar of hot pink simple syrup in my fridge at all times.

Please share your favorite rhubarb recipes with me, so I can broaden my rhubarb horizons!

If you're looking for another "tipsy" ice cream drink, check out my Bourbon S'mores Milkshake! If you're in the mood for rhubarb, these Strawberry Rhubarb Crumble Bars from Nourished by Nutrition look delicious! 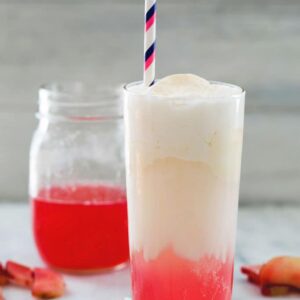 Feel free to leave the vodka out of this ice cream soda if you prefer.
Pin this Recipe for Later!Mention @wearenotmartha and share a photo if you've made the recipe!
Tweet1
Share6
Pin138
Yum22
Share
167 Shares