These Milky Way Doughnuts are baked chocolate doughnuts topped with homemade caramel sauce and Milky Way pieces. They're easy to make and heavenly to eat!

(This recipe for Milky Way Doughnuts was originally posted in January 2014, but has been updated with new photos and content in 2019).

Back when I first made these treats in 2014, doughnuts were just taking over the food world and becoming the hot new trend, stealing the title away from cupcakes. Five years later and I still kind of feel like doughnuts are where it's at. Other treats have tried to take over (macarons made a solid effort, but I think they ended up being a bit too fancy for the average person), but none have really succeeded. I feel like tons of cupcake bakeries have closed over the years... And don't even get me started on frozen yogurt places! But doughnut shops? They're still popping up all over the place and getting tons of business.

No matter where you live, you probably have a doughnut shop close to you (I'm not talking Dunkin' Donuts because if you live in New England, I'd be surprised if you couldn't walk to one from your house... We have EIGHT in my not very large town... I'm talking "gourmet" doughnut shops) and that is a very good thing. But it's also a good thing that you can easily make doughnuts right in your own home. It's an even better thing that you can do it without making your house smell like oil. That's the beauty of baked doughnuts. Some baked doughnuts can be dry and bland... But these Milky Way doughnuts?? They're moist and chocolatey and pretty much everything you want in a doughnut.

This Milky Way Doughnut recipe is perfect for when you have some extra candy sitting around... But I won't lie and pretend I didn't go out and buy a bag of Milky Way Bites JUST for the purposes of making these doughnuts.  I decided I really needed a baked chocolate doughnut topped with a delicious caramel sauce and chopped Milky Way pieces. They ended up being so quick and easy to make... Even the caramel sauce. But if you really don't feel like making your own, you can definitely use store-bought here.

The only "special equipment" you need for making baked doughnuts is a doughnut pan. I've owned this Wilton donut pan (affiliate link) for years and have zero complaints about it!

Then, gently stir the wet ingredients into the dry ingredients until just combined, taking care not to over-mix (over mixing will result in too chewier cake-ier doughnuts).

Spray your doughnut pan with some cooking spray and fill about ¾ of the way with batter.

Bake at 325 degrees for about 8-10 minutes. You’ll know they're done when they’re light and springy to the touch. Let the donuts cool in pan for a couple minutes and then remove to baking rack to cool entirely.

Repeat with remaining batter. And while you’re waiting for them to bake, whip up that caramel sauce for the doughnut topping!

I think there's a misconception that caramel sauce is really tough it make. It's not at all! Occasionally it can go wrong (generally from having the heat too high or not stirring enough), but for the most part, it works wonderfully and is absolutely delicious.

Put brown sugar and butter in a medium saucepan over medium heat. Let mixture come to a boil, stirring all the while. Remove from heat and stir in heavy cream. Keep stirring.

Put pan back on heat, bring back to a boil and let boil for about two minutes.

Remove to heat-safe container. Stir in salt and let cool to room temperature, about an hour.

Once doughnuts and caramel are both cooled, spoon caramel over each of the doughnuts. And top with chopped Milky Way bars.

Let caramel harden before you dig in.

Then again, you don’t haveeee to let it harden before you start eating these bad boys. I won’t tell anyone.

If you’re a Milky Way fan, I’m pretty sure you’ll be a fan of these, too. In fact, I have to admit these were the BEST baked doughnuts I’ve made. I think it has something to do with the fact that they’re chocolate. Of course, they’re still not fried (duh), but they are totally satisfying as a doughnut and one I’d be more than happy to eat for breakfast, lunch, dinner, or dessert.

Have I mentioned that I hope doughnuts remain a trend for the rest of my life? Even if they don’t, I’ll still be making them (forever and ever and ever), but I’d also love for new fun doughnut shops to continue popping up. There's almost nothing I love more than finding new donut spots when I'm traveling.

Speaking of, do you spell them "doughnuts" or "donuts"?? I used to be adamant that the correct spelling was "doughnuts," but now I think it's become more commonly acceptable to use "donuts." However, when I'm updating old "doughnut" posts that use that spelling, I'm keeping it as is. I blame Dunkin' Donuts for this issue. But whether you're calling these Milky Way Doughnuts OR Milky Way Donuts, I promise you'll love them!

If you love Milky Ways as much as I do, try my Milky Way S'MoresGranola Bars or my Milky Way Midnight Cheesecake. I also love these Milky Way Cookies from Sally's Baking Addiction! 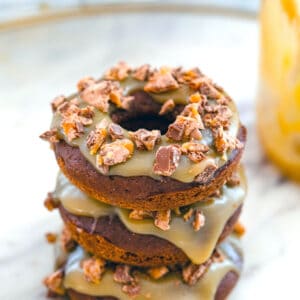