This Milky Way Cheesecake is made with Milky Way Midnight Dark Chocolate bars for an extra decadent cheesecake that tastes like it came straight from a bakery!

(This recipe for Milky Way Midnight Cheesecake was originally published in January 2010, but was updated with new photos in 2018).

When I went back home to be with my parents for several days during Christmas, I realized that my apartment kitchen isn't nearly big enough. OK, so it could be much worse and I know I shouldn't complain, but I'm lacking counter space and it's not fun sharing the space I do have with someone else.

If I had a kitchen like my parents', I'd likely be cooking and baking non-stop. So, I decided to do a bunch of baking while I was visiting them. But then I made the cinnamon rolls and we were all on a sugar-high for a couple days and probably couldn't handle the Milky Way cheesecake I wanted to make.

Plus, sometimes when I'm at my parents', all I want to do is sit on the couch with a cup of tea and a book. And that's mostly what I did.

But, I did get a brand new 11-cup (yes! 11-cup!!!) Cuisinart food processor (affiliate link) for Christmas. So, while I opted out of making the cheesecake for the days I was home, my mom gave me a food processor tutorial showing me how to make the graham cracker crust. And then I made the rest of the cheesecake back at my apartment when the cinnamon rolls finally left my system.

It was my first time making cheesecake. But after eating it? Oh, it certainly won't be the last! (note that these photos were re-shot in 2018, so they aren't representative of my very first cheesecake anymore!)

Like most good cheesecakes, this Milky Way cheesecake starts with a chocolate cookie crust. But instead of just chocolate graham cracker crumbs and melted butter, you also add sugar and coffee. Insert evil laugh here.

These ingredients make for the perfect cheesecake crust!

Then comes the Milky Way cheesecake filling making. This is a pretty basic cheesecake recipe made in a 9-inch springform pan with cream cheese, eggs, heavy cream, sugar, vanilla and sweetened condensed milk.

But the fun part? Those chopped up Milky Way Midnight bars!

I think Milky Way Midnight Dark bars are one of the most underrated candy bars around. Everyone loves Milky Ways, right? But so many people just straight up ignore how much more delicious they are when made with dark chocolate!

I bought exactly how many bars I needed (5 total; 4 for the cheesecake filling and 1 for topping) and it was SO hard for me not to dig into this bowl before I added them to the cheesecake. Why the heck did I not buy an extra??

After I let my cheesecake bake for 45 minutes and then sit in the oven with the door slightly cracked for another hour, had a small crack in it. Normally this would make me sad, but I knew I'd be drizzling melted chocolate over the cheesecake and that the crack would be barely noticeable. In my opinion, that's one of the best parts about fully loaded cheesecakes! However, here's a guide for preventing cheesecake cracks... I'm pretty sure I beat my cream cheese for a bit too long.

OK, I need to be honest here. I used to HATE cheesecake. Then my sister made one with chocolate in it and I realized it was actually kind of good. Then I realized the peanut butter chocolate cheesecake at the Cheesecake Factory is good too. And then I decided I actually quite enjoy cheesecake. In any way, shape, or form. And yup, I especially enjoy Milky Way cheesecake.

What I'm trying to say is that if you know someone who doesn't like cheesecake, give them this cheesecake. It will be a nice little introductory course in learning to fall in love with cheesecake. And they will fall in love. They're absolutely crazy if they don't. I got many comments that this was even better than a Cheesecake Factory cheesecake and tasted absolutely professional.

I mean, you can SEE the sugar crystals in that chocolate crust!

But really, this Milk Way cheesecake is the perfect combination of cheesecake and chocolate, with a little caramel tucked in for good measure.

In my house, the cheesecake didn't last long and I only regret I didn't get to share it with more people. But to everyone in my life, don't worry because there will be more cheesecake. Because now, I love cheesecake! And I know how to make cheesecake!

And having a whole one in my refrigerator could prove to be quite dangerous. So, I'm gonna need some help around here.

Are you a cheesecake lover?

If you're looking for other delicious cheesecake treats, check out these Lemon Blueberry Cheesecake Cups and these Frosted Animal Cracker Cheesecake Bars! I also really want to try this Cherry Chocolate Cheesecake from Nourishing Amy. 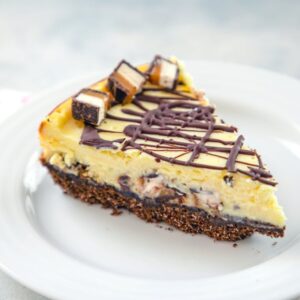