'Tis the season for candy cane desserts and festive ice cream flavors. This Peppermint Ice Cream with homemade marshmallow fluff will get you in the holiday spirit!

(This recipe for Peppermint Ice Cream with Marshmallow was originally posted in December 2011, but was updated with new photos and content in 2019).

Peppermint again? Yes. Ice cream right when it starts snowing in Boston? Yup. If ice cream wasn't meant to be enjoyed year round, it wouldn't pair so well with holiday flavors.

And if I wasn't meant to cook and bake with peppermint every day leading up to Christmas, it wouldn't be so delicious. But it is.

And peppermint ice cream is one of the very best ice cream flavors. Add a little homemade marshmallow fluff in for extra silkiness and you'll want December to last year round, too.

In case you don't know, my absolute favorite holiday song from childhood is Marshmallow World. The Johnny Mathis version. I played the song so much when I was a kid, my sister hid the cassette tape on me.

But that obviously didn't stop me from singing it out loud all season long. Which was probably worse for her.

But it's a seriously catchy song that will make you happy… Annd stay in your head forever. Shhh I'm allowed to be a Johnny Mathis fan for Christmas. Leave me alone.

And since it really is a marshmallow world in the winter, I'm tempted to add it to all my holiday treats. So, that's the plan. Starting with this peppermint ice cream.

How to Make Peppermint Ice Cream with Marshmallow

As you may know, making ice cream is a bit of a process and, while it's not difficult (I promise!), it requires a bit of patience since it needs time to chill at two different stages. I'm pretty sure that making lots of ice cream is what has taught me the art of patience.

And the reward is so sweet with this peppermint ice cream.

To start, heat the cream, milk, and sugar in a medium saucepan over medium heat and stir until the sugar dissolves and the mixture is hot, but not boiling.

In a small, heat-resistant bowl, whisk the egg yolks (make sure you save one of the whites of the eggs… you'll need it for the fluff!). Slowly pour half the heated milk mixture into the bowl with the egg yolks, whisking the entire time.

Then pour the egg yolk mixture back into the saucepan with the rest of the milk, continuing to whisk. This is done to "temper" the eggs, so you're not just adding them into a bunch of hot liquid and cooking them.

Now, cook the mixture over medium-heat until the mixture begins to thicken and coats the back of a wooden spoon, about 5-7 minutes. Then strain the mixture into a heat-resistant bowl.

Cover the bowl with plastic wrap and refrigerate until very cold. I recommend refrigerating for at least 4 hours, though I often do it overnight.

While the peppermint ice cream mixture is cooling, you can get started on the homemade marshmallow fluff. If you've never made your own fluff before, get excited because it's SO easy!

In the bowl of an electric mixer, beat together the egg white, corn syrup, and salt on high-speed for about 4-5 minutes, until it's nice and thickened and turns white.

Now, mix in the confectioners' sugar, vanilla, and cream of tartar on low-speed until combined.

The marshmallow fluff should stay good in your fridge for about 10 days, so just pop it in there until you're ready to use it in your ice cream.

Once your milk/cream mixture is sufficiently cold, you're ready to make ice cream the old fashioned way. Er, with an electric ice cream maker. If you're looking for a good one, I highly recommend the KitchenAid Ice Cream Maker Attachment (affiliate link).

I've made hundreds of batches of ice cream in mine and it works like a charm every time.

When the ice cream is almost done processing, add in marshmallow fluff and crushed candy canes. Crushing candy canes is one of my most-hated kitchen tasks, but it's so worth it for this peppermint ice cream!

Now, pop your ice cream into airtight containers and put them in the freezer, for another 4 hours hours. Told ya it was all about patience.

I served up a huge bowl of peppermint ice cream with some extra candy cane crumbles on top.

The marshmallow makes this ice cream a bit softer than the typical homemade ice cream, but there's something so wonderful about this. It's smooth and creamy, almost like silk.

Is that a weird way to describe ice cream? I don't even care.

The peppermint taste is like whoa. Which is exactly how I like it. Christmas in a bowl! But seriously, the ice cream doesn't have an overpowering peppermint flavor, but it's definitely there. Along with a little bit of crunch from the crushed candy canes.

If you generally leave cookies out for Santa, I highly recommend leaving a bowl of this candy cane peppermint ice cream out for him instead. It could mean extra gifts!

Of course, you may want to simply write Santa a note letting him know this is waiting for him in the freezer… Otherwise it could just be a big bowl of soup by the time he arrives. A delicious bowl of soup, but still.

You know, I'm actually really sad that Thanksgiving was so late this year. It doesn't feel like there's enough time to truly feel the holiday spirit or to try all the holiday ice cream flavors I want to experiment with.

If you're looking for more fun holiday ice creams, try my Triple Gingerbread Ice Cream or my Sweet Potato Ice Cream. I also really want to try this Cranberry Ice Cream from The View From Great Island! 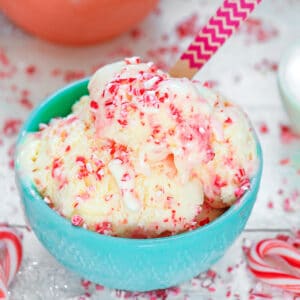