Sweet potatoes and ice cream may seem like an unlikely combination, but this Sweet Potato Ice Cream, packed with white chocolate and toasted pecans, will convince you that sweet potatoes make the best fall ice cream flavor!

(This recipe for Sweet Potato Ice Cream was originally published in August 2010, but was updated with new photos and content in 2019).

So, what the heck is in them?? It's actually a combination of squashes. Whaaat. In some ways, this is shocking and distressing to me. But then when I really think about it, it's not a big deal.

Pumpkins are actually in the squash family and are super similar to many other types of squash. And to sweet potatoes, too. All of those delicious orange veggies are so similar to each other.

Which brings me to the point of this post... Sweet potato ice cream.

When I tell people I make sweet potato ice cream, a lot of times I don't get a very enthusiastic reaction. In fact, many people wonder why the heck I'd want to ruin perfectly good ice cream with sweet potatoes.

In fact, I think sweet potatoes are a bit sweeter and more candy-like than pumpkin, so chances are, you'll like it even more!

This recipe is a pretty standard custard-based ice cream recipe, with the addition of sweet potato puree and lots of fall spices.

Plus, I added in some pecans and white chocolate chips for extra fun.

Here's everything you need:

You do need an ice cream machine to make this ice cream. I've owned the KitchenAid ice cream attachment for about 8 years, have used it hundreds of times, and can't recommend it enough if you're in the market for one and already own a KitchenAid mixer.

You'll also need some airtight containers in which to store your ice cream. You can use any kind of container, but I absolutely love these ones.

You are certainly welcome to buy canned sweet potato (though who the heck knows if it's actually sweet potato in there!) for this ice cream, but I decided to make my own.

I just baked a sweet potato at 400 degrees until it was tender (45-60 minutes) and then let it cool. Once cooled, I removed the skin and popped it into my food processor to puree until smooth.

I ended up adding about 1 Tbsp water to thin it out a bit.

Now you're read to make the ice cream! Heat the cream, milk, and brown sugar in a medium saucepan, stirring until the sugar is dissolved and mixture is hot.

Cook over low heat, stirring constantly, until mixture thickens slightly (should cover the back of your spoon), about 4-6 minutes. Don't let the mixture come to a boil.

Pour the mixture through a strainer and into a heat-resistant bowl. And while the mixture is still hot, whisk in the sweet potato puree, cinnamon, ginger, nutmeg, and salt.

Cover and refrigerate the mixture until it's thoroughly chilled, about 4 hours.

Then, use your ice cream machine to turn the creamy mixture into ice cream!

I let my ice cream maker run for about 20 minutes before I added in the white chocolate chips and toasted pecans and let it finish processing.

Scoop the ice cream into a separate container (if you make a lot of ice cream, definitely consider getting some quart-sized containers, like theseand pop it into the freezer to fully harden, another 4 hours or so.

After scooping the sweet potato ice cream into bowls, I obviously topped it with more white chocolate chips and toasted pecans. Because these are the things that make my fall heart happy.

Along with things like cinnamon, ginger, and nutmeg (oh my!).

I served this sweet potato ice cream along with homemade triple chocolate cake for my mom's birthday and I think everyone was a bit skeptical at first. Especially my husband who isn't really into the whole "let's put vegetables into desserts" thing.

In fact, he doesn't even like nuts in his desserts. But he actually said this is one of his favorite ice creams! And he ended up eating the rest of the batch the next evening.

Just make sure you store your ice cream in an airtight container in your freezer and it should last for about 2 months.

But I'd be surprised if it lasts that long!

This sweet potato ice cream really does taste like fall in a bowl. It's certainly similar to pumpkin ice cream, but I actually like this flavor a bit better thanks to the added roast-y sweetness.

Then again, it's quite possible all my pumpkin ice creams have actually been butternut squash ice creams. Of course, the spices round out the ice cream flavor wonderfully.

If you love sweet potatoes as much as I do you may be looking for some more unique recipes, both sweet and savory, that include them. Here are some of my favorites:

Of course, pureeing your own sweet potatoes is also a whole lot easier than pureeing fresh pumpkin. But you really can replace the sweet potato puree in this ice cream with another puree of your choice.

Whether you're serving this sweet potato ice cream as a simple fall treat or alongside pumpkin pie at Thanksgiving time, it will certainly be the talk of the table... But I promise it will also end up being the hit!

Next time someone tells you sweet potato ice cream is weird, tell them the pumpkin they're eating probably isn't even pumpkin. And at the end of the day, who cares, because all orange vegetables are delicious!

What's the most interesting ice cream flavor you've ever had? 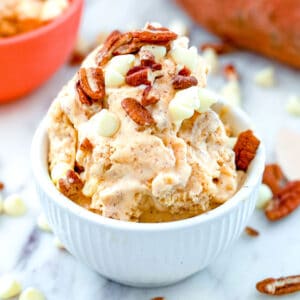 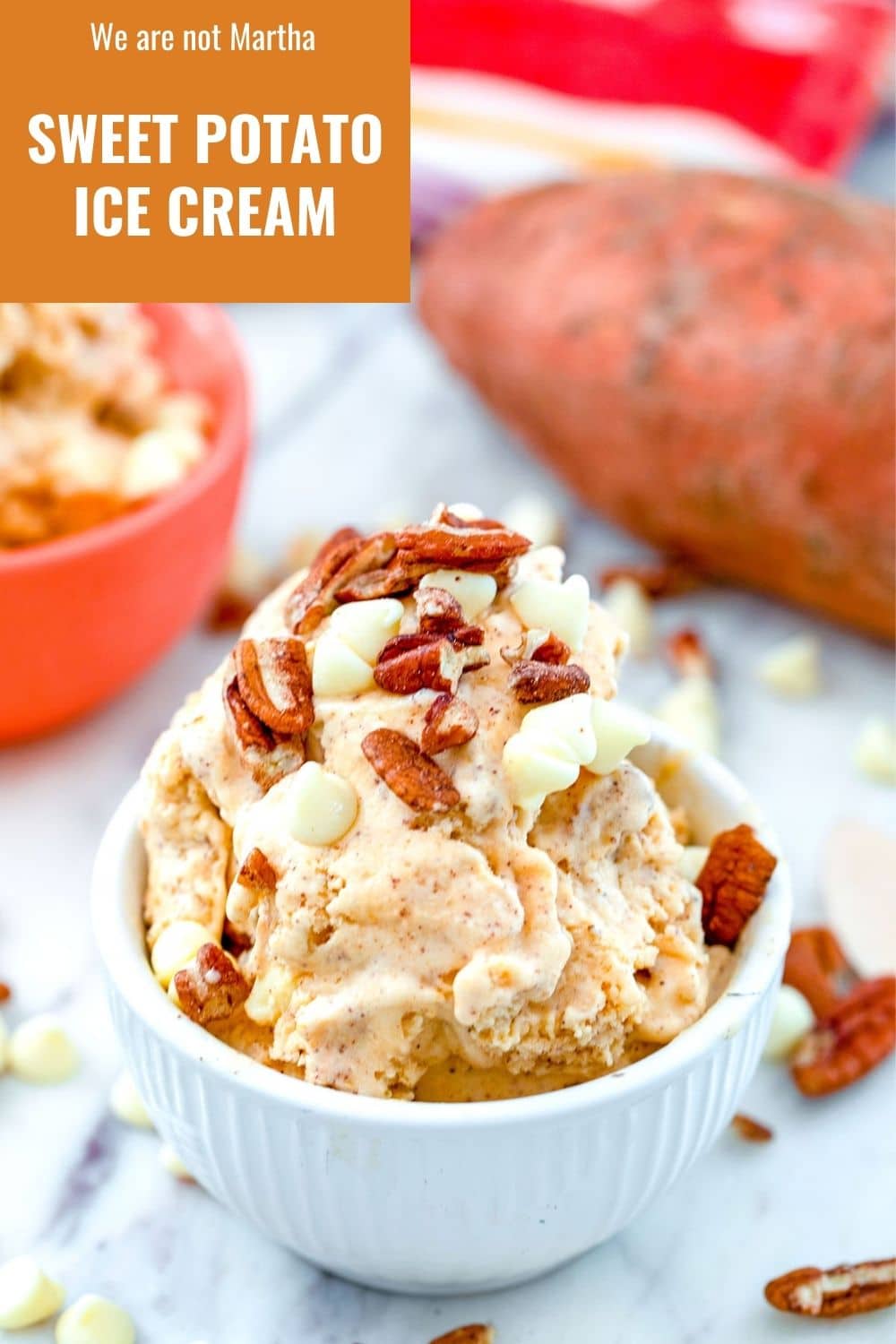