When there’s a chill in the air, all I want to do is cuddle up on the couch with a cinnamon roll and a cup of coffee. These Pumpkin Cinnamon Rolls are packed with pumpkin spice flavor and drizzled with a deliciously sweet icing, making for the perfect fall breakfast or afternoon treat. 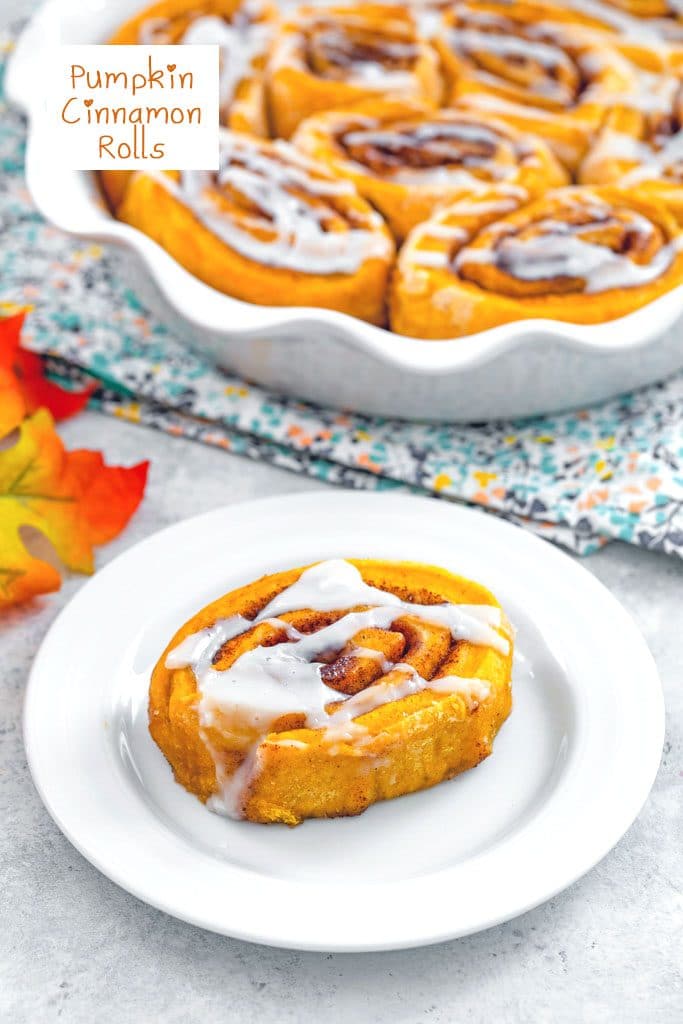 (This recipe for Pumpkin Cinnamon Rolls was originally published in November 2010, but has been updated with new photos and content in 2019).

Let’s be clear: There is no wrong time for cinnamon rolls. I’m talking no wrong time of year and no wrong time of day. You can ask, are they best for leisurely summer brunches or better for snowed in days? Are the perfect for breakfast or do they make more sense as a decadent dessert? But then you can stop asking those questions because the answer is ALL OF THE ABOVE. Cinnamon rolls are perfect all day any day.

Now that we have that out of the way, let’s talk about these pumpkin cinnamon rolls. While I’m not going to tell you to stop eating pumpkin in the summer (eat it whenever you want! Just please don’t bring pumpkin beer into my house in July because that annoys me), I am going to tell you these pumpkin cinnamon buns are a serious fall obsession of mine. Right when the chilly weather hits (even if it’s only in the morning), I want these in my house.

These cinnamon rolls aren’t difficult to make, but they are a little bit of a process and require some dough rising time. If you want these for breakfast and don’t want to get up at the crack of dawn, you can assemble the cinnamon rolls up until you place them in their baking dishes, keep them in the fridge overnight, and pop them in the oven in the morning. It doesn’t get any easier than that!

You’ll want to start by making the dough. I find it easiest to do in my stand mixer, but if you don’t have one, you can do it in a large bowl with a hand mixer or even a whisk. You’ll just have to knead the dough for a little bit longer on your countertop.

Start by stirring the yeast and warm water together in the bowl of a stand mixer or in a large bowl. Let sit for 2 minutes. 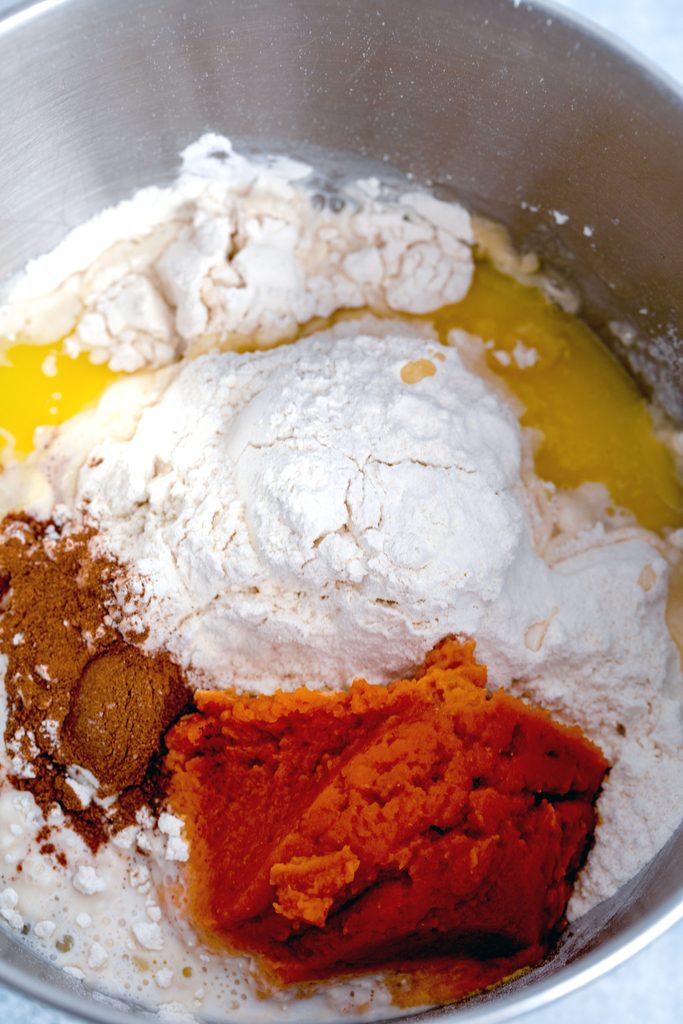 Beat at medium speed until smooth.

Then it’s time to get kneading the dough. If you have a dough hook on your mixer, knead with this for about 6 minutes, adding the remaining cup of dough little by little throughout the process.

If you want to do it by hand, it will probably take you about 10 minutes on a well floured surface. Again, add the remaining cup of flour a little at a time if you’re doing it this way.

Place the dough in a large bowl that has been lightly coated in oil (I used vegetable). Coat the dough in the oil, cover it with a kitchen towel, and let it rest for about an hour in a warm spot. If your kitchen is cool,  you can always keep your oven on low and place the bowl on top.

Once dough has risen, punch it down and let it rest for about 5 more minutes. 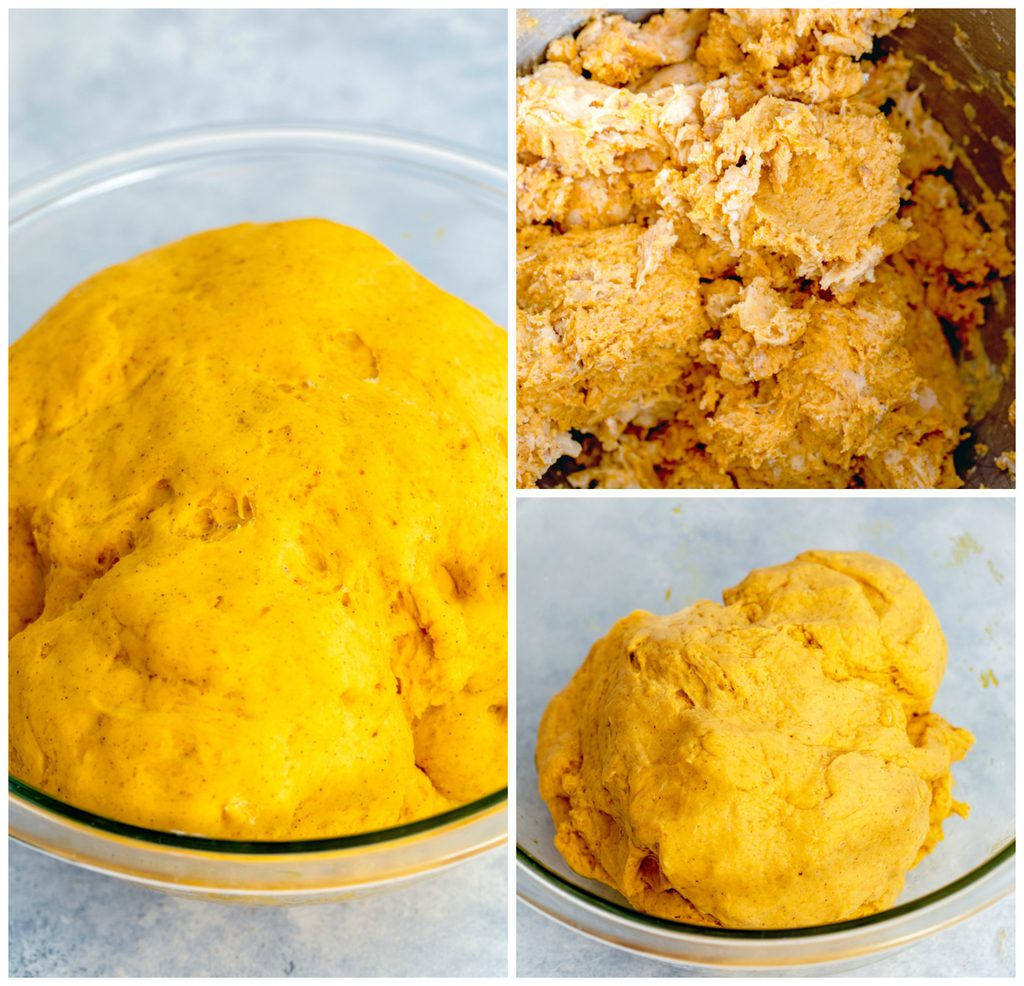 In the meantime, you can make your filling. Combine the granulated sugar, brown sugar, pumpkin pie spice, and cinnamon in a bowl.

Once done rising, place dough on a well-floured surface and, using a rolling pen, roll dough into a large rectangle, about 30×10 inches (if you don’t have a big enough surface, you can split the dough into two portions and make two separate rolls).

Once the dough is rolled, pour about 10 Tbsp of the melted butter on top. And sprinkle the sugar and spice mix all over the top.

Ready to roll? Starting from the long edge furthest from you, roll the dough tightly, pressing firmly to eliminate air pockets.

Pinch seams and ends to seal. 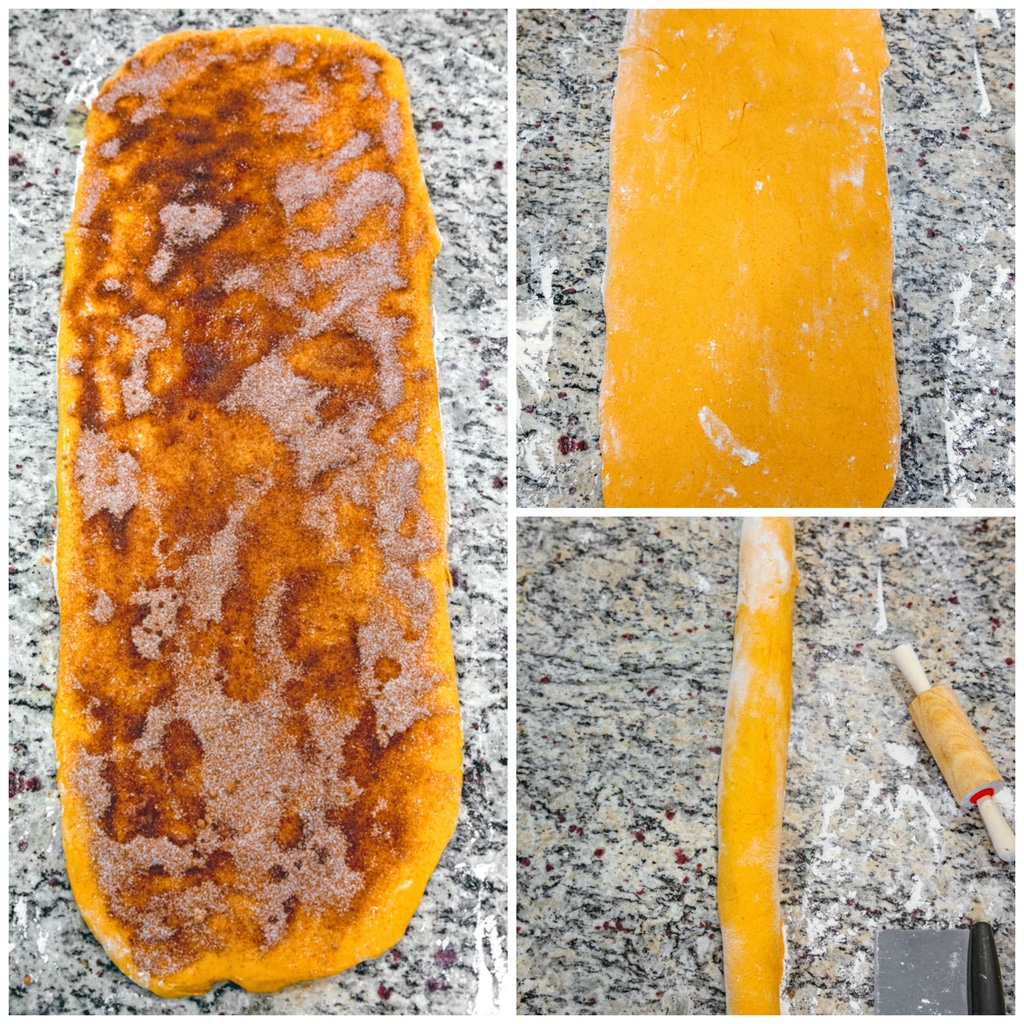 Cover the dish with a kitchen towel and let rise for another 20 minutes. Like I mentioned above, if you want to save these to bake in the morning, once you have the pumpkin cinnamon rolls in the baking dish, cover them in plastic wrap, and pop them in the fridge. You can also put them in the freezer if you want to enjoy them much later. I often bake one dish of cinnamon rolls right away and keep one in the freezer for emergencies.

Otherwise, while they’re rising pre-heat your oven to 375 degrees.

And bake the rolls for about 17-20 minutes or until they’re golden brown. 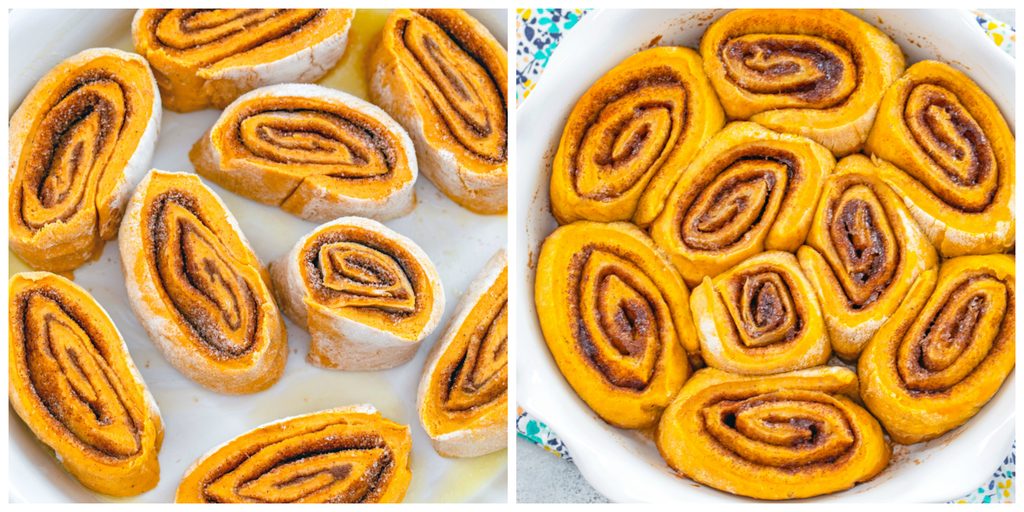 While they’re baking, whisk together confectioners’ sugar, milk, and vanilla in a bowl. And then when the cinnamon rolls come out of the oven, pour the icing over them. 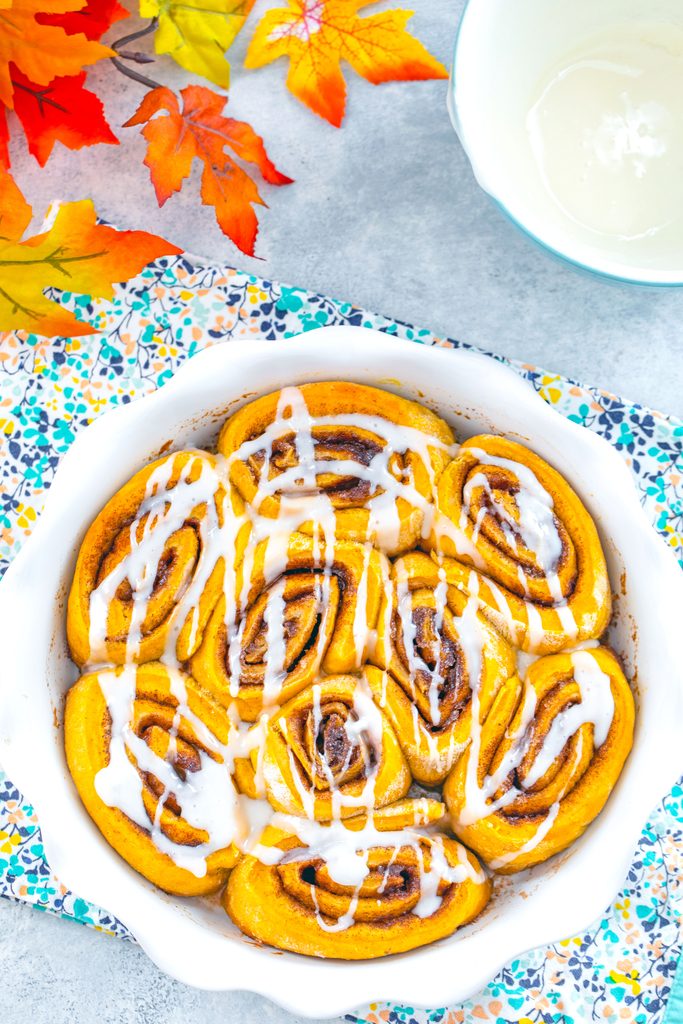 Being the cinnamon bun lover that I am, I absolutely loved these. The pumpkin taste isn’t overpowering by any means, but is most definitely there. You’ll first notice it while these are baking and your kitchen starts to smell absolutely delicious.

And then when you dig in, you’ll absolutely love the touch of pumpkin spice in every bite. 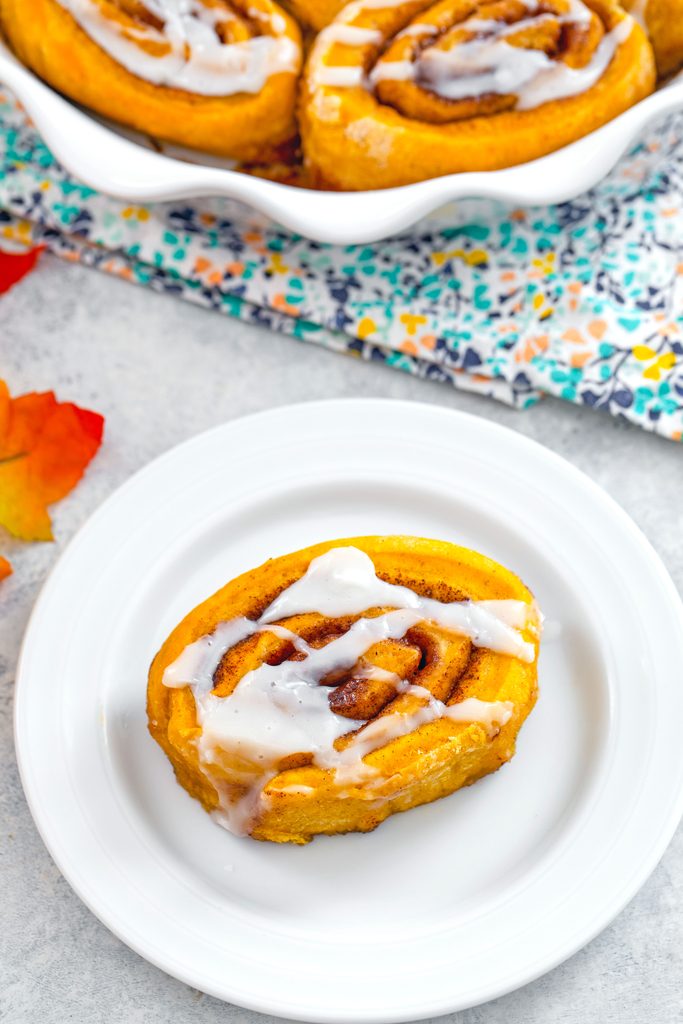 So, would you rather have one of these cinnamon rolls first thing upon waking up in the morning or in the middle a long day of work when you just want to relax for a bit with a cup of coffee or tea and a treat? See, not such an easy decision is it? It’s OK, there’s no right answer.

Trust me, I’ve experimented quite a bit and have indulged in cinnamon rolls at pretty much every hour of the day.

And they’re all equally amazing. 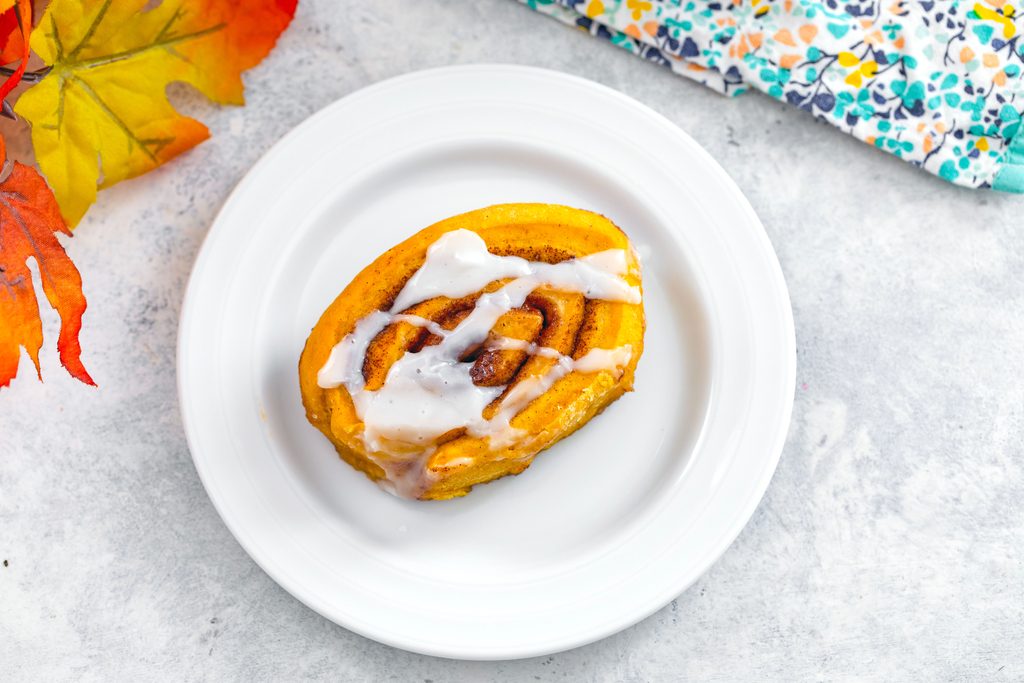 I think cinnamon rolls are quickly becoming one of my most often made recipes since I can’t seem to have a brunch gathering without a dish of them. I’ve made all different kinds, but these pumpkin cinnamon rolls might just be my favorite variation.

Serve them with cup of pumpkin spice coffee and I’m even more in heaven. 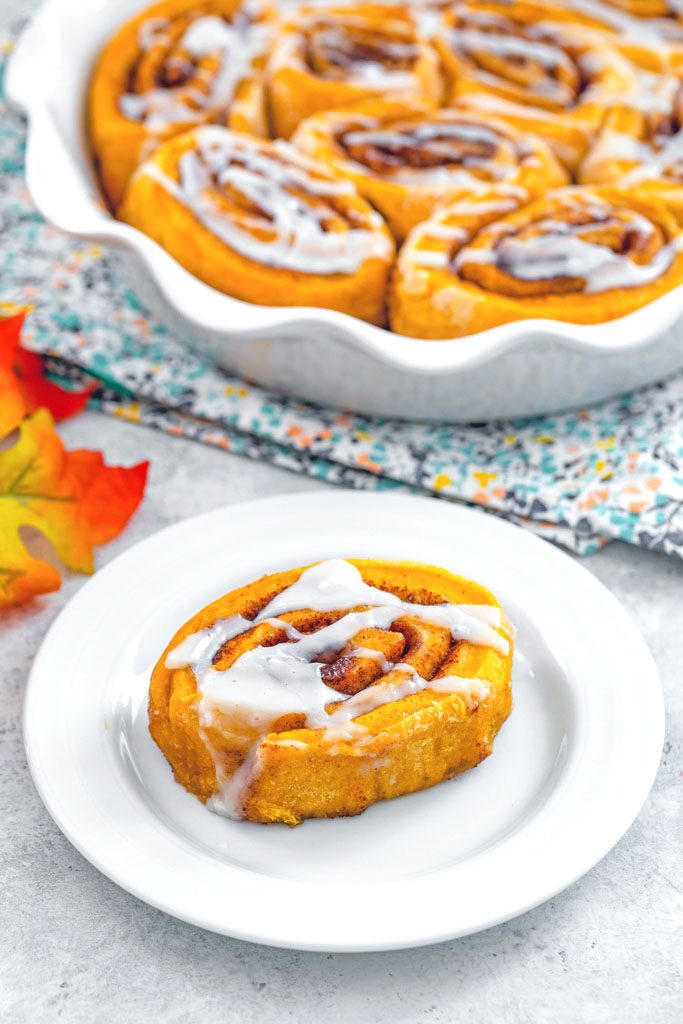 Have you made your own cinnamon rolls before?

If you like these pumpkin cinnamon rolls, be sure to check out my Blueberry Funfetti Cinnamon Rolls and my Gingerbread Rolls with Eggnog Glaze.  Next up, I want to try this Crock Pot Cinnamon Roll Casserole from Daily Appetite! 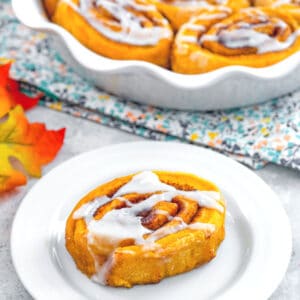 When there's a chill in the air, all I want to do is cuddle up on the couch with a cinnamon roll and a cup of coffee. These Pumpkin Cinnamon Rolls are packed with pumpkin spice flavor and drizzled with a deliciously sweet icing, making for the perfect fall breakfast or afternoon treat.
Prep Time1 hr
Cook Time20 mins
Rising Time1 hr 20 mins
Total Time1 hr 20 mins
Course: Breakfast, Dessert
Cuisine: American
Keyword: Cinnamon Roll Recipes, Pumpkin Breakfasts, Pumpkin Desserts
Servings: 18 Cinnamon Rolls
Author: Sues