Gingerbread Rolls with Eggnog Glaze take the classic cinnamon roll and give it a holiday spin. With the zing of ginger and sweet eggnog flavor, these buns make the perfect Christmas breakfast.

(This recipe for Gingerbread Rolls with Eggnog Glaze was originally published in December 2011, but has been updated with new photos.)

I feel like we need to talk about holiday movies. Not the classics (everyone knows Miracle on 34th Street is the best, right?? And that Elf is a modern classic that must be watched at least once per season), but the Hallmark and Lifetime Channel Christmas movies.

Chris and I cut cable a couple years and I actually haven't missed a thing EXCEPT for the fact that we no longer have a way to access the Hallmark channel. Which wasn't an issue that even crossed my mind until December 1.

But then I took a deep breath and turned to the Lifetime Channel and told myself it would be enough. And so far, it has been. But I can't help wondering what I'm missing on Hallmark. Sigh.

The movies are so bad. SO bad. But it wouldn't be Christmas without them and there's something so comforting and cozy about them. In trying to tell my mom what they're about (she's a fan of the crazy crime/drama/murder Lifetime movies, but can't really get behind the cheesy Christmas ones), I realized they're all about the exact same thing.

Single overworked girl in her late 20s/early 30s set to spend another Christmas alone. Enter parent/child/niece nephew/etc. who wishes to Santa/an angel/upon a star that said female will find a man. Girl travels to small town and meets man. Female and male fall in love. Drama occurs, female learns she was set up/has to return home to her busy life. Eventually gets over it/realizes what matters in life and they spend Christmas together/happy ending occurs.

I could most definitely talk about these movies all day, but I know that's not why you're here. You're here for the gingerbread rolls. I think.

Or maybe you want to come over and watch cheesy television Christmas movies with me and then have a Paideia Seminar about them (please tell me I'm not the only one who had Paideia Seminars in elementary school!).

In that case, I'll serve you these gingerbread rolls while we watch.

First of all, I have to tell you I spent a lot of time researching the difference between cinnamon rolls and cinnamon buns and came to the conclusion that they're pretty much the same thing (except the buns are often referred to as sticky buns).

How to Make Gingerbread Rolls

In any event, I think cinnamon rolls/buns have a reputation for being really difficult and complicated. A lot of baked goods made with yeast do. But they're actually quite easy.

You just need to account for some rising time and have a little bit of space to roll out the dough.

If you don't have enough counter space, you can separate the dough into two portions and roll it out in two separate batches.

Once the dough is rolled out and all that delicious melted butter, sugar, and ginger is spread on, roll the dough into a long tube and then slice it into little gingerbread buns.

Place them in a pie plate, taking care not to crowd them too much since they'll rise more. You should be able to get two standard pie plates out of them.

And then bake them and let the ridiculously delicious smell of holiday gingerbread spread throughout your home.

How to Make Eggnog Icing

While the gingerbread rolls are in the oven, you can whip up a simple eggnog glaze to drizzle on top. The glaze is super easy consisting of just confectioners' sugar, eggnog, and nutmeg.

Just whisk it all together in a bowl and when the rolls are out of the oven, drizzle the icing over them.

Like I said, these aren't actually cinnamon rolls... because there's no cinnamon involved! I stuck to ginger and sugar for a more festive flavor with these gingerbread rolls.

I guess they're not really true gingerbread without the molasses, but they're packed with sweetness and ginger flavor and perfect for a Christmas breakfast.

They'll certainly get your family and/or friends out of bed if you strategically put them in the oven first thing in the morning.

Probably if you have small children, you don't have any problems getting them out of bed first thing on Christmas morning, so maybe you can use these as a ploy to keep them tucked away longer, telling them, "don't get out of bed until you smell the gingerbread rolls!"

And then you can force them to sit at the table and eat these gingerbread rolls before they can open their gifts from Santa. Muhaha. Just kidding, that's mean.

We were always allowed to open presents before breakfast, until I was in high school. And then I actually liked eating breakfast first because I loved the anticipation of the day to come.

And also, eggs Benedict. But I was always a weird kid and actually stayed in bed until my sister came to get me. My favorite part of Christmas was the excitement of what was to come and I didn't want to rush it.

Can You Freeze Gingerbread Rolls?

Yes! This recipe makes two pans of gingerbread buns, so you don't have to worry about rushing through them. In fact, I recommend freezing a pan before baking and bringing them out in the new year when you really need them.

To freeze a batch, after arranging rolls in pan (and before baking), wrap tightly in saran wrap and place in refrigerator or freezer until ready to bake. Simply bring to room temperature and bake when ready.

This also works well if you want to make the gingerbread rolls the week before you're planning to serve them.

The ginger obviously gives them a holiday kick, but ginger is a year-round spice, too, and can certainly be enjoyed after the holidays. A vanilla glaze would be just perfect.

But if you're enjoying them during the holidays, they go most perfectly with a tall glass of cold eggnog. I swear I love eggnog more and more every year. I think the best part is that it has such a short season that I never get sick of it.

Of course, gingerbread rolls make for the perfect movie-watching snack, as well. And obviously they pair best with cheesy holiday movies.

Also, if you have extra eggnog glaze, try your best not to eat it right from the bowl. But I won't tell on you if you do (pro tip: you can drizzle it over pancakes or waffles for a semi-more acceptable way of indulging).

What are your favorite movies to watch during the holiday season? Are you a cheesy made-for-television holiday movie lover like me? Do you have the Hallmark Channel?

If so, can you please record all of the new movies for me and send me a DVD? Haha... I'm only semi kidding!

If you're looking for more gingerbread treats to enjoy during the holiday season, check out my Gingerbread Chocolate Caramel Fudge and my Gingerbread Cookie Cake. I also love this gorgeous Gingerbread Bundt Cake from Oh, Sweet Basil! 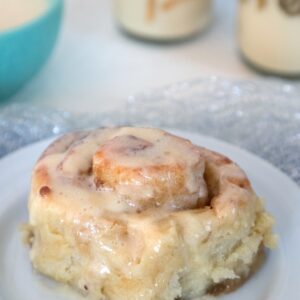