Is there anything better than a plate full of cinnamon rolls? How about a plate full of Blueberry Funfetti Cinnamon Rolls? These will make your kitchen smell amazing and are the perfect addition to weekend brunch!

Wait, is it really Monday again?? How does that keep happening?? I can't complain, though because I just returned from a fabulous long weekend in Salt Lake City for the Everything Food Conference, where I hung out with some awesome food bloggers, chatted with a couple brands, ate a TON of food, and learned all about blogging from the best.

There's not much I love more than walking around and exploring new cities and towns.... Unless it's staying at home on my couch with a plate full of cinnamon rolls.

The first time I made cinnamon rolls, I thought they were sooooo time-consuming and arduous, but now I'm all "pshh these ain't no thang" and I'll whip them up on a Friday afternoon after work to enjoy for the weekend. Yes, that is DANGEROUS.

Want to know something else that's dangerous? The fact that this recipe makes two batches of funfetti cinnamon rolls, which means you can throw one dish into the freezer to bake when you're having a sudden craving that needs to be fulfilled immediately with no time to wait for the dough to rise.

Also dangerous is that once you know how to make them, you can play around with flavors and other fun stuff like fruits and sprinkles. I have been planning funfetti cinnamon rolls for a while, but was also craving blueberries, so I combined the two for these Blueberry Funfetti Cinnamon Rolls.

I learned to make cinnamon rolls with a Pioneer Woman recipe and have adapted it throughout the years, depending on my add-ins and how many I want to make. These were my best-yet cinnamon rolls, which means I won't be stopping any time soon.

The blueberry cinnamon rolls do require a bit of time for dough rising, but other than that, it's all about rolling out the dough into a giant rectangle, filling it with your goodies, rolling it up, and slicing it.

As you can see, I used the typical cinnamon and sugar for these blueberry funfetti cinnamon rolls... But obviously added in a healthy amount of blueberries and sprinkles, too!

How to Make Blueberry Icing

I also made a simple blueberry icing to top the funfetti cinnamon rolls with. You really can't have a cinnamon roll without icing. Well, you can; but that's just silly.

All you have to do is place blueberries in a bowl and use a fork or masher to mash together. And then whisk together with confectioners' sugar and milk.

Hooray, hooray, hooray!! Is all I could think when I took this beautiful dish out of my oven.

Seriously, if you happen to be having people over on a Saturday morning or afternoon, pop these in the oven and your house is going to be swoon-worthy.

Then when they come to the door, you can be all, "oh really? It smells good in here? I hadn't noticed."

Dangerous, I tell you. I love my neighbors, but I actually wish I had some close friends that lived next door, so I could just have them stop by at times like these.

Or I could pop treats like this in their mailbox. Close friends who weren't on diets ever. Otherwise they would just be annoying. And they'd just make me feel bad. And I'd probably majorly annoy them, too.

I sat at my kitchen table and ate one of these Blueberry Funfetti Cinnamon Rolls with a fork. And basically just closed my eyes and was transformed to another place.

A place that involved no stress or worries and was pretty much just an endless weekend. The way life should be.

How to Make Ahead of Time

In my opinion, cinnamon rolls are best when they're fresh out of the oven. But obviously, they're also best for brunch and you may not have time to make this recipe from start to finish first thing in the morning.

After the dough has risen and you've added in the additional flour, baking powder, baking soda, and salt, you can cover the bowl tightly with plastic wrap and place in fridge for up to three days.

In the morning, you can finish rolling the dough and forming rolls, bake, and enjoy.

If you want to get even more of the recipe done the day before, you can arrange the rolls in the pan, cover them tightly in plastic wrap, and place them in the fridge overnight or for up to 2 days. Simply bring to room temperature and bake when ready.

Since this recipe makes two pans of cinnamon rolls, you may want to freeze one. After arranging the rolls in pan, wrap pan tightly in saran wrap and place in refrigerator or freezer until ready to bake. Bring to room temperature before baking.

I didn't go too crazy on adding blueberries when I made these because I didn't want them to end up an ooey gooey mess (yes, they are still ooey gooey, but in a controlled manner).

I feel like the blueberry to bun ratio is perfect here and the sprinkles just make them look like more of a party. Which is never a bad thing.

So, I made these blueberry cinnamon rolls last week, but I'm pretty sure the dish that I put in my freezer is going to come out and go in the oven tonight.

I'm expecting no guests and have no real reason to celebrate anything... But maybe we can just celebrate the fact that we made it through another Monday? I'm all about the small things in life.

Making it through Mondays, successfully getting your grocery shopping done, doing a work presentation, or even just checking a few things off your to-do list (yes, even if one of those things was "take a shower"), I think you deserve these.

And if you can't think of one thing you've accomplished today, I think you need these blueberry funfetti cinnamon rolls as a little pick-me-up.

Once you start making your own cinnamon rolls, you may not be able to stop! They're so much better than what you can buy in a can or pre-made and there are so many options for flavorings and fun add-ins.

Here are some of my favorite cinnamon roll recipes:

See? I'm really good at justifying stuff like this. Especially if it involves sprinkles.

But really, stop making me justify these funfetti cinnamon rolls to you... Just know that you deserve them!

What's the best cinnamon roll you've ever had? 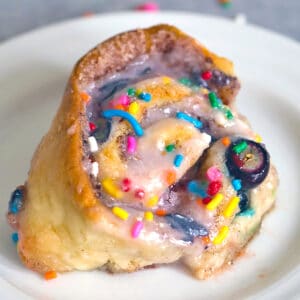 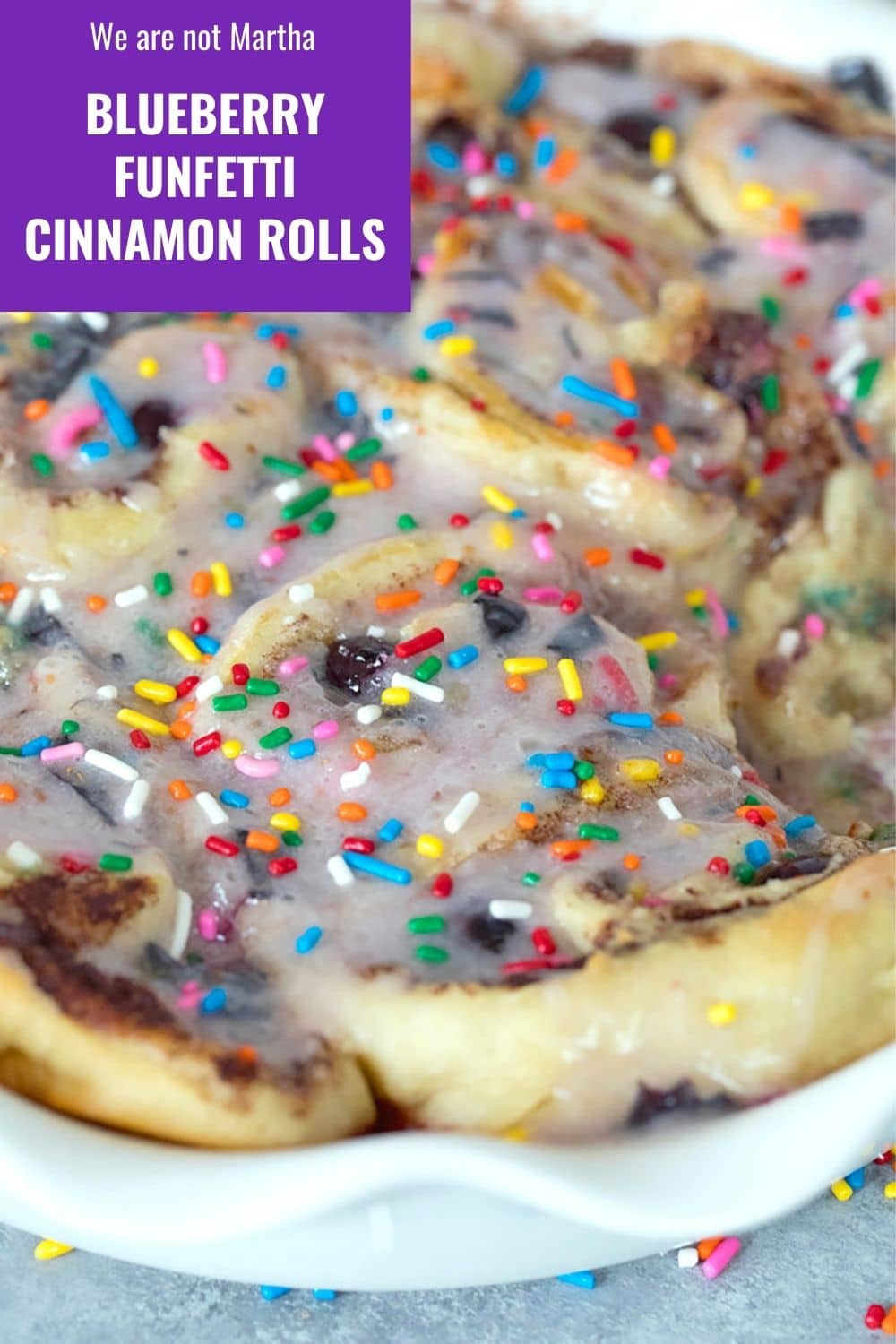