It doesn't get any more delicious than these S'mores Vodka Cupcakes, which involve s'mores vodka in both the cake and the frosting... Plus, they have a marshmallow fluff center!

There's a lot of debate over flavored vodkas and whether or not so many of them should exist. I won't get into that here. Because you already know I feel about them. I just plain love them. Both to drink and bake with. I'll never tell anyone to stop making alcohol that tastes like Fruit Loops or birthday cake or root beer or any other amazingness they can come up with in the future. Because sometimes it's good to lighten up and have a little fun with your cocktails. The first time I heard of Three Olives brand vodka was when I learned about Bubblegum vodka. The idea totally blew my mind and I ordered a bubblegum cocktail while out to dinner one night. It was insane (in a fabulous way) and while I'm not going to chug flavored vodkas every night of the week, I can tell you I never looked back.

While I love whipping up a cocktail with a flavored vodka or mixing one with soda water, I also love baking with them. Because baked goods and alcohol? Putting two of them best things in the world together makes the double best thing in the world. Or something like that. When Three Olives reached out to me to tell me about some of their new vodkas and offer some cocktail recipes, they also offered to send me some of their s'mores vodka. Y'all know how I feel about s'mores so this was RIGHT up my alley. I'll definitely be sharing a cocktail recipe soon, but first, I just couldn't wait to add the vodka to some cupcakes. And frosting.

Sure you can easily make a simple s'mores cupcake... But why wouldn't you want to make them with s'mores vodka instead? My motto in life is, "if you can make it boozy, do it!" OK, that sounds bad, but basically, desserts with a little bit of alcohol in them are always a good idea! And these s'mores vodka cupcakes are really no more difficult to make than the typical cupcake!

In the bowl of an electric mixer, cream butter and sugar together until light and fluffy. Add egg and mix to combine.

In a separate bowl, whisk together the flour, cocoa powder, baking soda, and salt. Mix dry ingredients into wet ingredients, alternating with milk, until just blended.

With a spatula, stir in warm water and vodka, until batter is just combined. Look at that yummy fudge-y batter!

Fill cupcake tins lined with cupcake papers ¾ way full of batter and bake at 350 degrees for 18-20 minutes, until toothpick inserted into the center comes out clean.

Cool in pan for a bit and then remove to wire racks to cool completely.

The marshmallow fluff is super easy to make and I love doing it homemade. All you have to do is beat an egg white, light corn syrup, and salt in a mixing bowl until it thickens and turns white. Then mix in confectioners' sugar, vanilla extract, and cream of tarter. Done and done! Orrrr you could open your container of the store-bought Fluff. Ain't nothing wrong with that, but I'm telling you that homemade fluff is so easy to make!

Once cupcakes are cool, core out the center. Another thing I've said a million times before is that I'm obsessed with my Cuisipro Cupcake Corer (affiliate link). Best invention on Earth. But you can also use a knife to get the core out.

Fill the inside of the cupcake with luscious marshmallow fluff. Now this is starting to looks like a Hostess Cupcake!

In the bowl of an electric mixer or in a large bowl with a hand mixer, cream the butter until light and fluffy. Slowly blend in the confectioners' sugar, cup by cup until well-combined. Pour the vodka in now, as well. And mix the graham cracker crumbs into the frosting with a spatula.

Now you can frost the cupcakes. I originally tried to pipe the frosting on. But the graham crackers kept getting stuck in the pastry tip, so I gave up and just spread it on instead.

Then I stuck half of a little chocolate bar onto the cupcakes. Did you know those little portions of the Hershey Bar are called "pips"?

I totally considered making a marshmallow based frosting and torching it for a s'mores campfire-y feel. But then I realized that probably wouldn't be the smartest idea, what with the vodka and all. Good thinking, Sues.

So, there's really nothing not to like about these s'mores vodka cupcakes. I mean, chocolate, marshmallow, frosting, and VODKA. Can you argue with that?

Plus, s'mores. My favorite flavor combination means that it's almost summer when s'mores EVERYTHING is acceptable! I'm not really sure how many more s'mores related treats I can even conjure up at this point, but you know I'm going to try. And this vodka will help immensely.

I rest my case that vodka goes with everything. This cupcake was super moist and I'm giving credit to the vodka. The frosting? Had the BEST most s'mores like flavor; the vodka really came through here and combined perfectly with the graham cracker crumbs.

Also, when you cut the cupcake open, it totally looks like a Hostess Cupcake. But I'm 100% certain s'mores vodka cupcakes are better. Because Hostess Cupcakes don't involve alcohol in their baked goods, do they? Nor do they taste like s'mores. Sheesh. It's no wonder Hostess is going out of business.

I could save that business. Or maybe Three Olives could. Because they legitimately have a vodka for every flavor you could dream of. And I hope they keep adding to their lineup… and that they offer me a job as a vodka flavor taste tester. I was made for that job.

And with this s'mores vodka cupcakes blog post, I give you permission to put vodka in all of your baked goods. And to kick your s'mores season off now. Today is Monday, so I'm pretty sure that's exactly the news you needed to hear, yes?

What's your favorite flavor of vodka?

If you love these cupcakes, be sure to check out my recipes for my Sweet Tea Vodka Cupcakes (more vodka in cupcakes!) and my Funfetti Chocolate Chip Cookie Dough Cupcakes. I also can't wait to try these White Russian Cupcakes from Charlotte's Lively Kitchen! 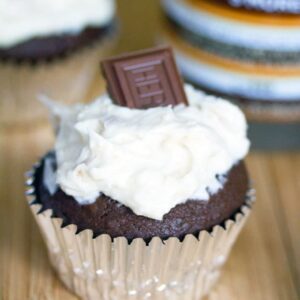 Disclaimer: Three Olives did send me this FABULOUS bottle of S'mores Vodka, but I decided to make cupcakes on my own and all opinions are my own! Thanks Three Olives 🙂