Ever crave nachos for dinner? These Greek Nachos with Ground Lamb are piled high with veggies and hummus, making them a totally acceptable dinner. Promise. 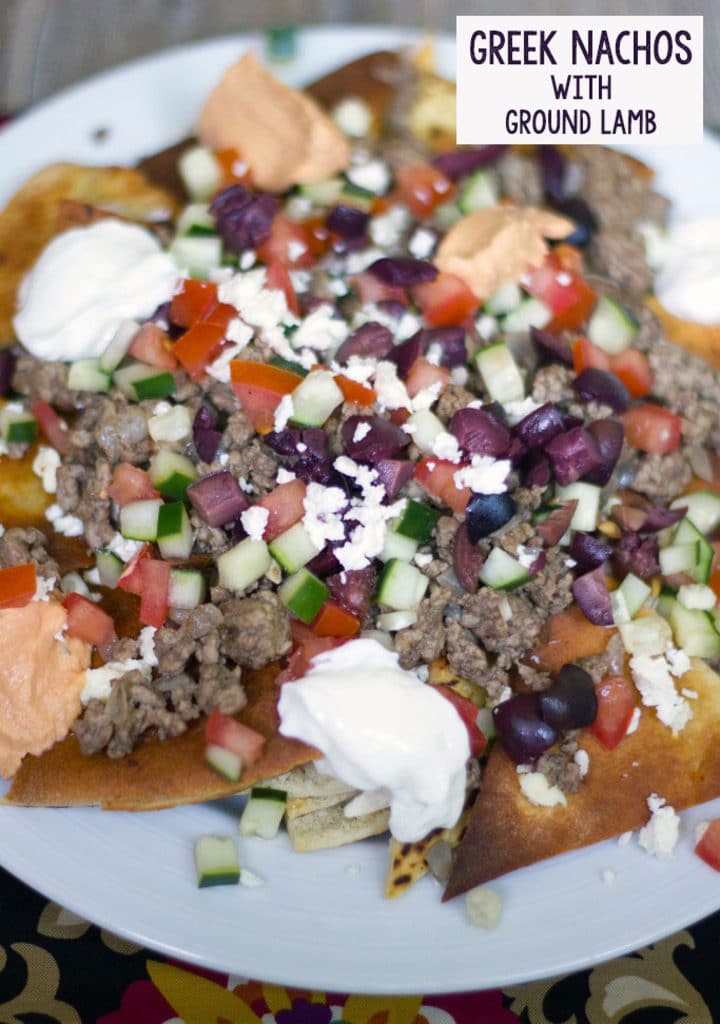 I try to never be ashamed of my life choices. Which is why I will openly admit to all of my fine readers here at We are not Martha that I do, in fact, eat nachos for dinner on occasion. I could give you a bundle of excuses (I’m SO tired. I've had a really long, hard day at work. I’m craving nachos. I heart cheese a lot. A LOT.), but instead I’ll simply embrace it. Gourmet dinners are grand, but sometimes nachos are better. And that’s a fact.

I should also clarify that when I say nachos, I typically means tortilla chips with melted cheese and lots of salsa. Super high class, obviously. But a couple weeks ago, I may have started to feel a bit guilty about my nacho habit and decided to do something to make them into an actual real honest meal. Time to call in the meat, if you will. I spotted ground lamb at my grocery store and immediately knew I wanted it on nachos. Greek nachos. With pita chips since you clearly can’t do tortilla chips with Greek nachos.

Let's be honest, part of the point of nachos is how simple they are to make and I certainly didn't want to over-complicate my lazy dinnertime routine with these Greek nachos with lamb. So, though there are more ingredients involved than in the typical nacho “recipe,” they’re still very quick and easy to make. But, to be honest, quite a bit more of a complete meal than your everyday nacho platter.

You'll want to start by making the nacho chips, which in this case are pita chips. Of course, you can always buy pita chips from the grocery store, but there's nothing quite like making your own... And they're super easy! All you do is split the slices of pita bread and cut each slice into 8 triangles. Brush both sides of pita bread triangles with olive oil and place on a baking sheet. Sprinkle with salt and pepper. 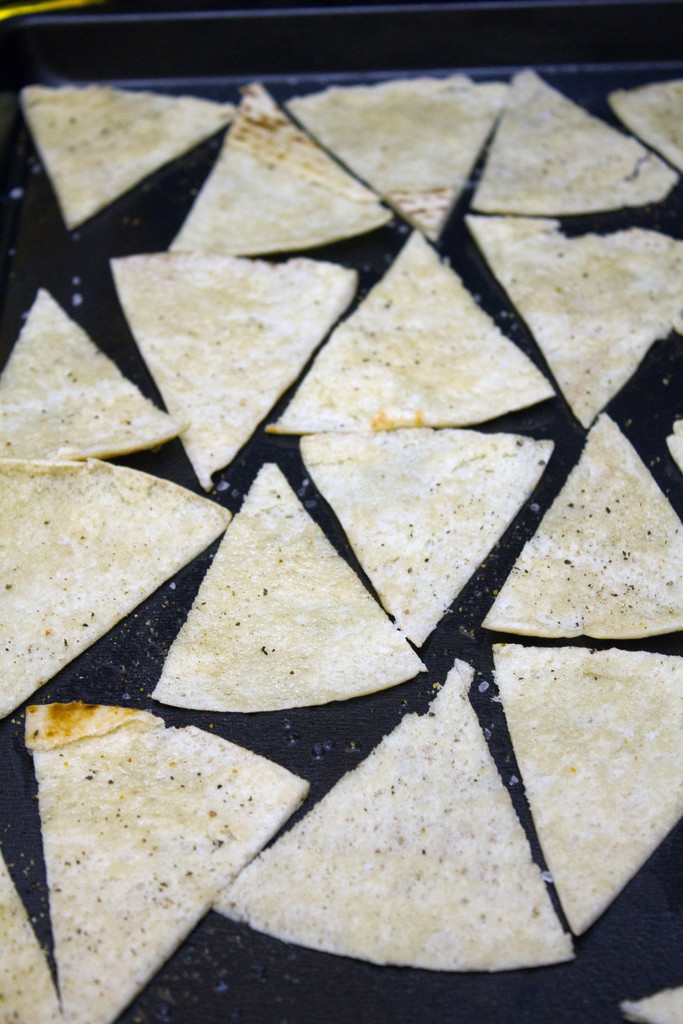 Bake pita chips at 370 degrees for 8-10 minutes, until lightly browned.

In the meantime, in a pan over medium heat, add a tablespoon of olive oil and cook onion and garlic until softened and fragrant, about 5 minutes. Add lamb to pan and sprinkle on coriander, cumin, and oregano. Cook, breaking up with spatula, until no longer pink. 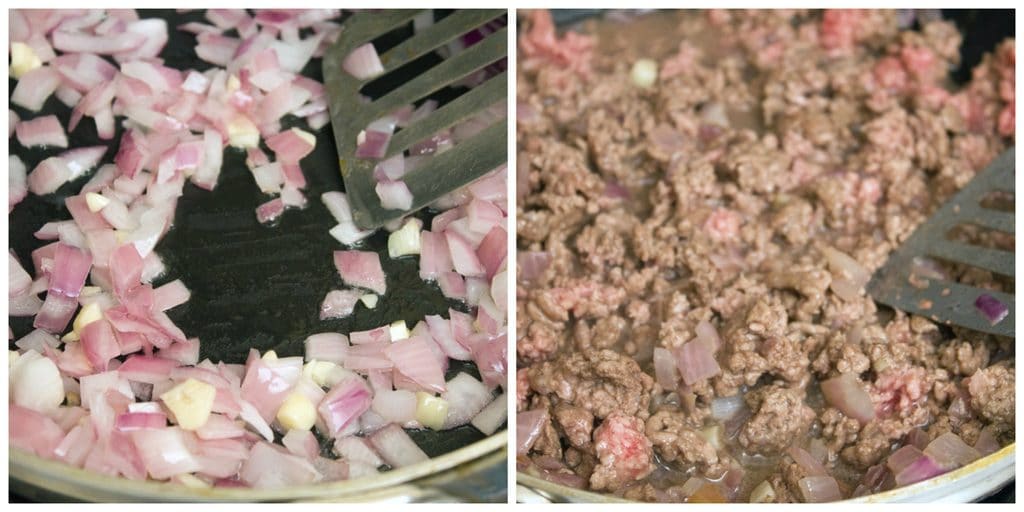 Now for the fun part! Arrange the pita chips into nacho formation and sprinkle feta cheese in between layers and on top. Feta cheese on nachos? YES, ma'am. 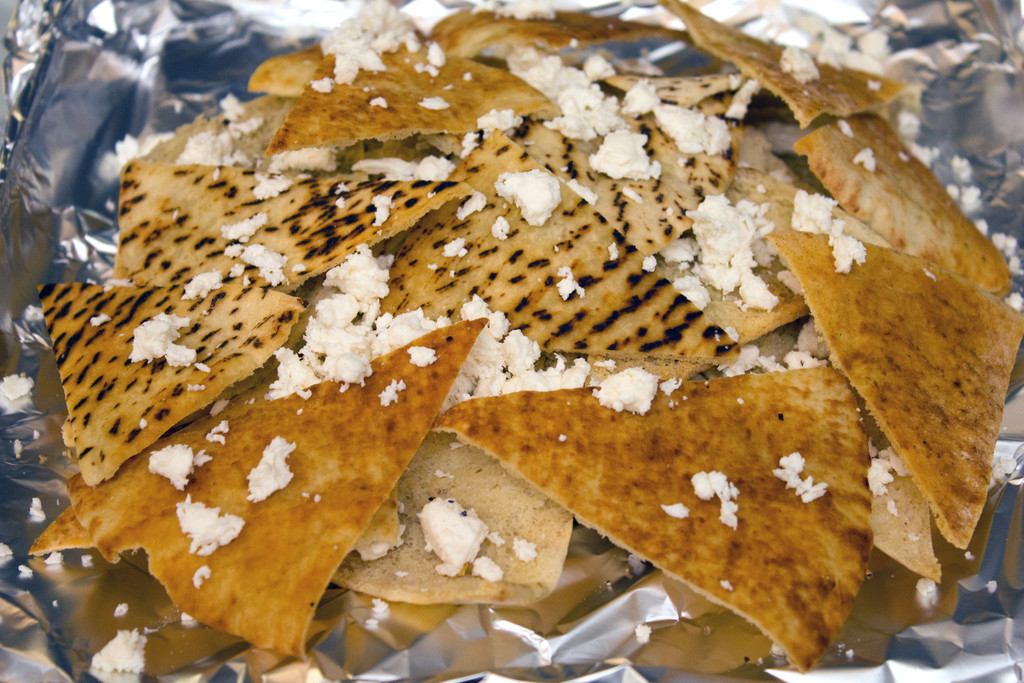 Broil for a couple minutes until feta gets melty. Top nachos with lamb and then sprinkle on chopped tomato, cucumber, and kalamata olives. Spoon hummus and Greek yogurt onto nachos for maximum scooping potential. You can sprinkle more feta over the top if you want, too. 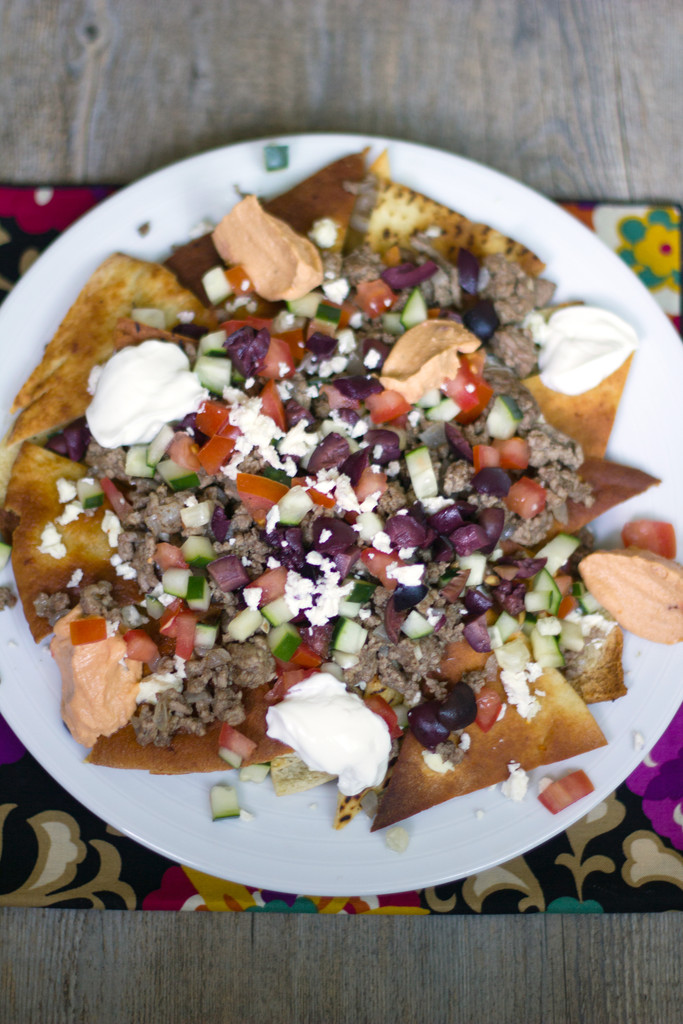 Now are you with me in the fact that nachos are an acceptable dinner? Please?

If you really want to argue it, I’ll just tell you that in a sense, these nachos are basically like open-faced tacos. With pita chips. And probably even less cheese and more vegetables than your standard tacos. 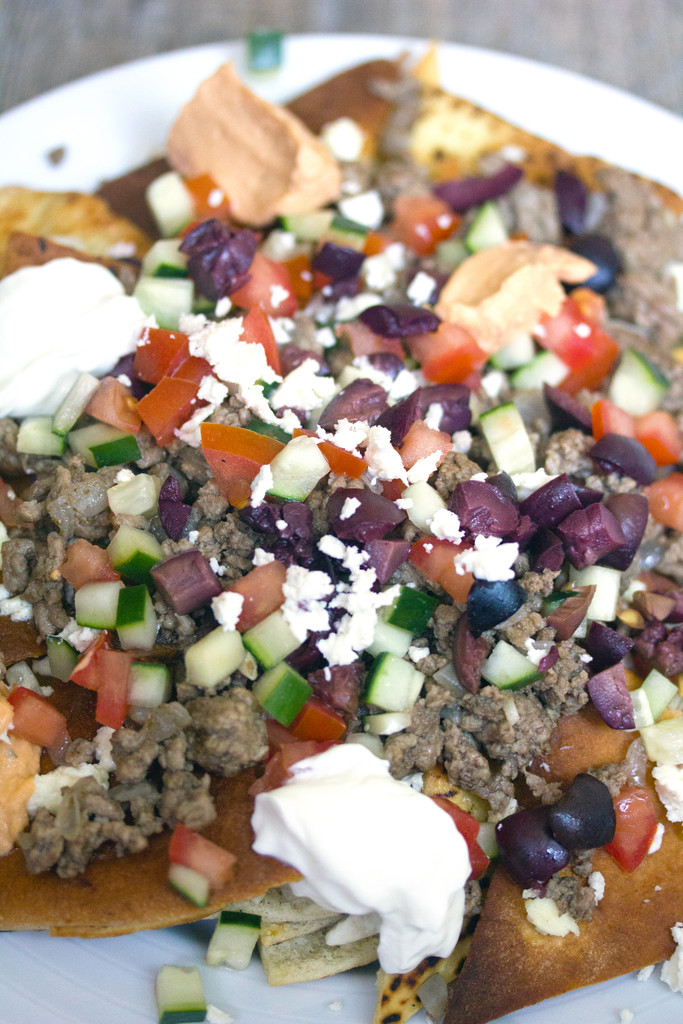 Whereas you may be scooping up loads of sour cream and queso with regular nachos, you’ve got healthy Greek yogurt and hummus on these nachos. So scoop away, friends. 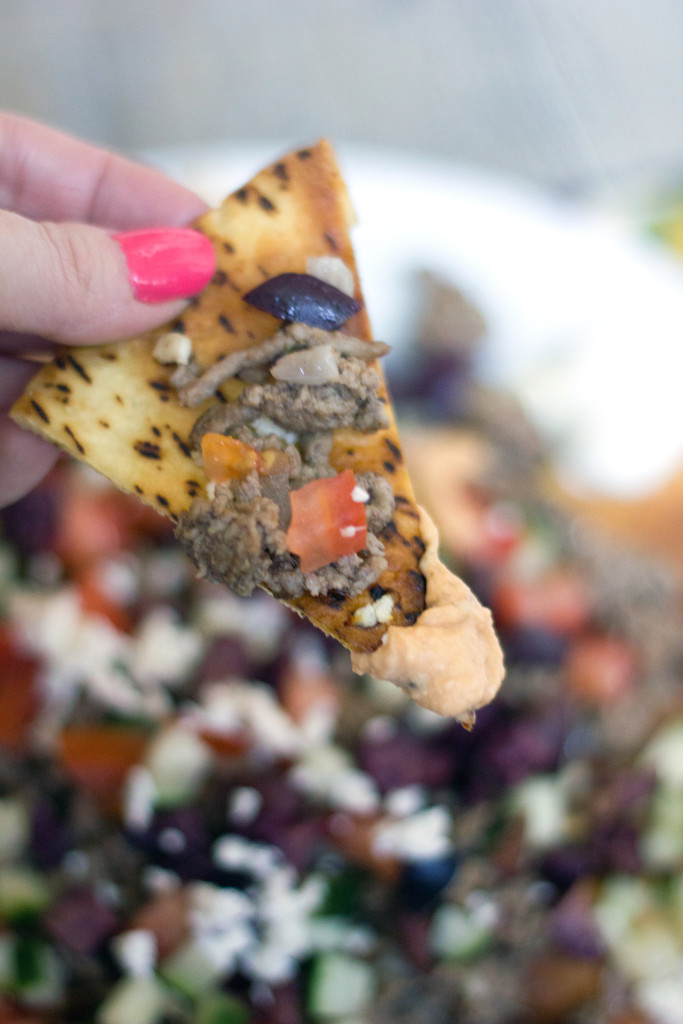 When it comes to how many servings this makes, that's a really tough question to answer. Because honestly, it depends on how hungry you are. And if you’re eating this for an appetizer or a meal. I’ll just say that two people could probably polish this off together. Not that I’m speaking from experience or anything. I'm not saying that you should... I'm just saying that you could. That you'd want to.

These Greek nachos also made me realize I need to incorporate more lamb into my life. And homemade pita chips. And probably kalamata olives, too. Basically, so many of my favorite things are piled up on this plate. 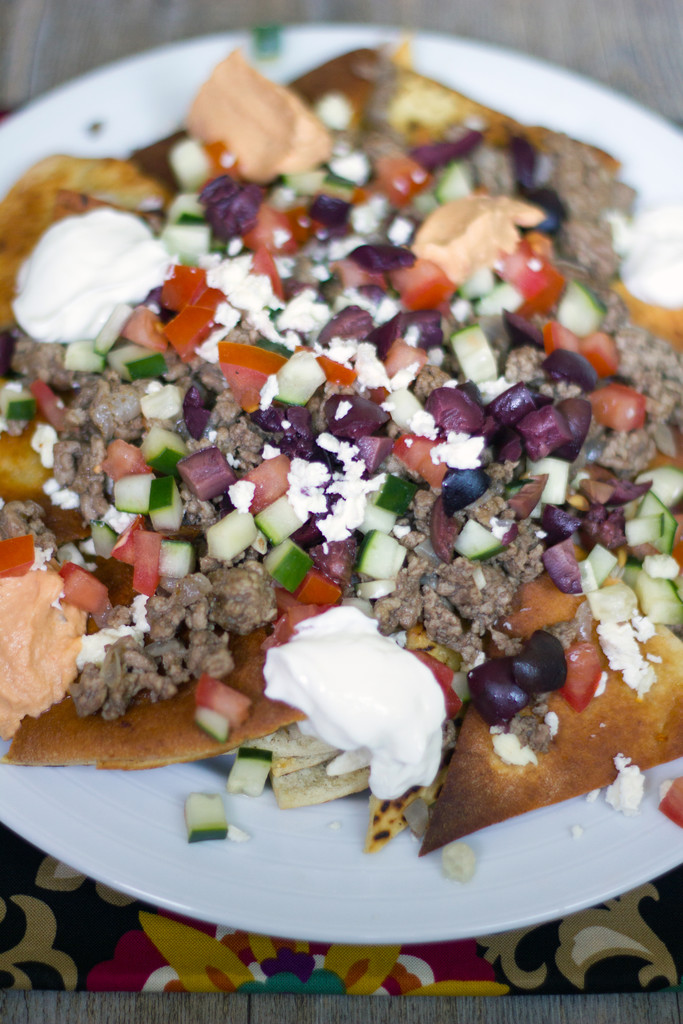 And that is how I justify nachos as a meal. Not that they need justifying. Ever. Tortilla chips with cheese and salsa will always be an acceptable dinner idea in my book. But it's now quite likely that Greek nachos with lamb will be landing in my weekly meal plan over and over again.

Do you have a favorite way of making nachos into a meal?

For more lamb recipes, check out my Coffee-Rubbed Lamb Chops and my Lamb Mint Flatbread with Feta. And for more delicious nachos, check out these Chorizo Skillet Nachos from A Dash of Ginger! 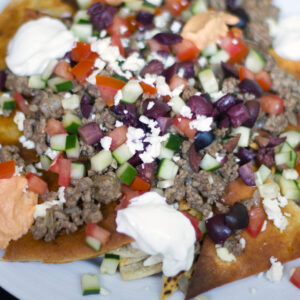