This Lamb Flatbread with Mint and Feta is easy to make with simple ingredients, but is filled with lots of delicious spring and summer flavors.

(This recipe for Lamb Flatbread with Mint and Feta was originally published in September 2011, but was updated with new photos in 2019).

If you're like me, you're currently wondering how long the plants on your windowsill have to live.

That basil plant that's been absolutely flourishing for the past 4 months? Is it going to suddenly catch a chill, shrivel up, and die?

The temperature is dropping and the sun is setting earlier and earlier. Better take that basil plant and make some pesto and freeze it STAT. You'll be thankful you did come December.

Is your mint plant already starting to get a bit wilty and brownish? Better make this lamb mint flatbread with feta ASAP. Wouldn't want all that mint going to waste.

This recipe, which I adapted from Martha Stewart Living, is a pretty perfect in-between season dish. It has all the freshness and summer flavor of mint, combined with the comfort of ground lamb and leeks.

You can eat it outside wearing a light sweater with the last of the summery beer. Or you can devour it snuggled under a blanket on your living room couch, watching the season finale of The Bachelor Pad.

Which is tonight. Which I'm not excited for at all. I swear. Ugh, trashy television. Who watches that stuff anyway?

How to Make Flatbread Dough

While I trust my girl Martha Stewart like no other, my go-to flatbread dough recipe is too perfect to mess with. Unless you have some really amazing reasoning, I'll likely never use another flatbread recipe again.

It's easy, quick (just a bit of waiting), and seriously no-fail. And I have the recipe memorized and for some reason, I'm NEVER able to memorize recipes.

All you have to do is mix together, yeast, water, salt, sugar, olive oil, and flour.

Let it rise and it's ready.

The recipe below is enough to make the two flatbreads this recipe makes. I recommend rolling out the dough thinly, so you may have a bit of leftover dough... It will stay good in your fridge wrapped tightly for about a week if you want to make a mini pizza or two!

How to Make Lamb Flatbread with Mint and Feta

Actually, this entire lamb flatbread is quite easy. All that you're required to do is chop some green goodness. Like leeks.

You know, I don't cook with leeks often at all. I'm not quite sure why, considering I love garlic and onions, close relatives to the leek. You might be seeing leeks around these parts more in the coming days.

Anyway, though the green part of the leeks are quite pretty, it's the white and light green parts you use. You'll want to clean the leeks well and chop them into ¼-inch slices.

Then put the mixture in a medium bowl and stir in the chopped mint and parsley.

This is springtime happiness in a bowl!

Now, using the same skillet, cook the ground lamb over medium-high heat. Break the lamb down with a spatula or wooden spoon while cooking.

Cook until browned, about 6 minutes.

While the lamb is cooking, pre-heat the oven to 500 degrees and sprinkle some flour on two 12-inch round baking sheets (obviously you can make these flatbreads one at a time if you only have one pan).

Divide your flatbread dough into two portions and roll each out into two thin 12-inch rounds. Cut off any excess dough if your rounds are too large. Place the dough on baking sheets

Brush the dough lightly with olive oil and leaving a ½-inch border on the dough, equally divide the leek mixture, lamb, and feta across the two dough rounds. Add red pepper flakes and remaining salt and pepper.

Bake at 500 degrees for about 12 minutes, or until edges are turning golden brown and getting crispy.

Garnish with more fresh mint for an extra punch of summer flavor.

I used to be one of those people who said, "when I want pizza, I want pizza…" which means red sauce, mozzarella, pepperoni you know the drill. These days? I generally prefer to experiment with my pizza and flatbread.

This lamb flatbread is one experiment gone right.

Like I said, I've been doing a lot of experimenting with flatbread lately... After you make this lamb pizza, try some of my other favorite thin-crust pies! I especially love these ones:

I mean, I kind of figured it was tough to go wrong with lamb, mint, leeks, and feta. The ingredients are all pretty simple, but they pack a flavorful and super spring-y punch.

I love eating this lamb flatbread as a meal, but it would also make the perfect summer party appetizer if sliced into little pieces.

You could also make it in a rectangular shape and slice it into small squares for a party.

Come to think of it, this really would make the perfect bad reality television watching meal.

It's got way more sophistication than typical greasy pizza, so at least you can feel kind of good about yourself while you watch cat fights, girlfriend stealing, and all that other drama.

Do you like to experiment with flatbread and pizza? Best idea you've had? 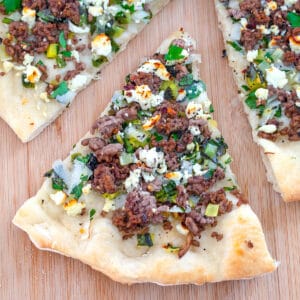 Lamb Flatbread with Mint and Feta 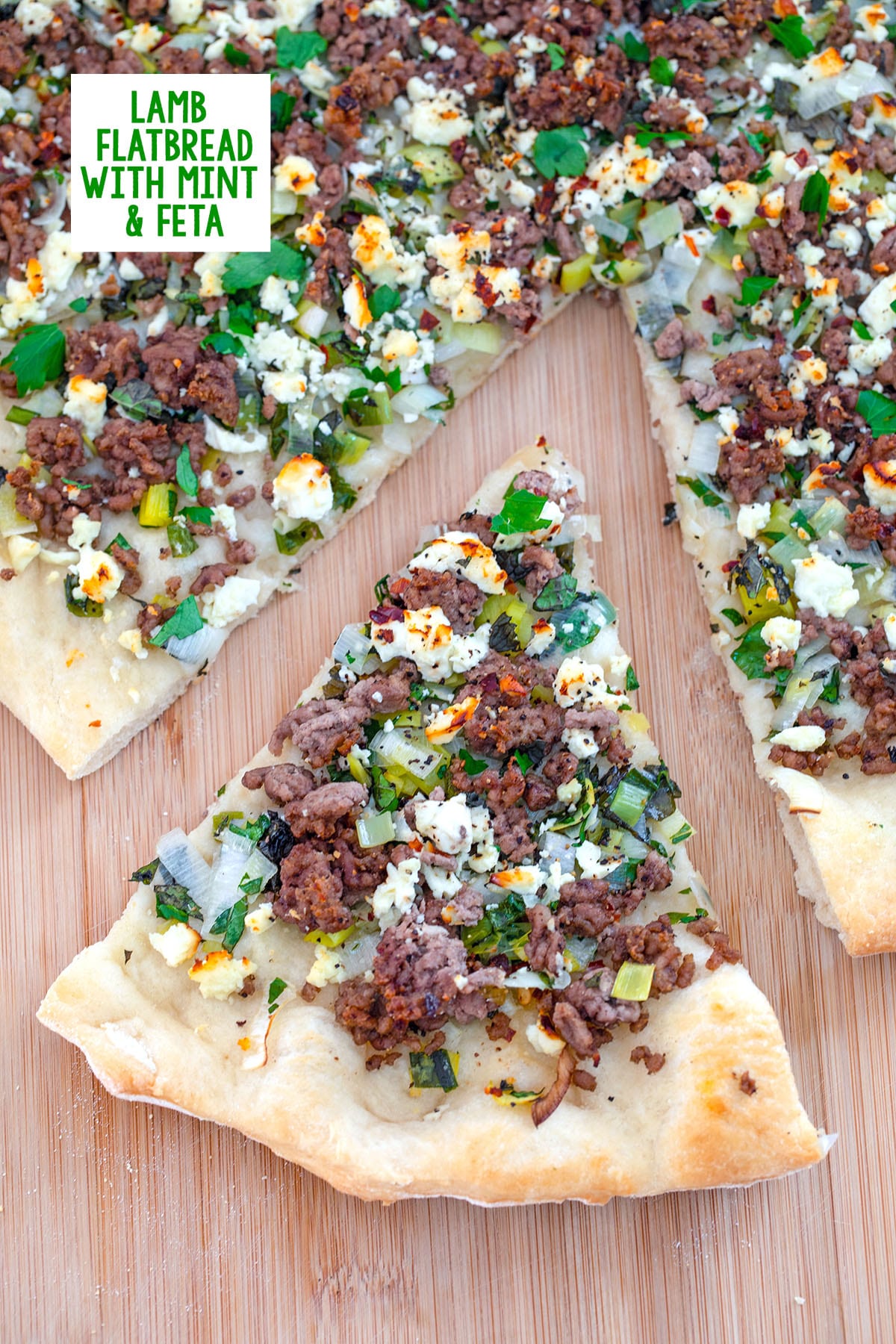