These Pumpkin Spice Linzer Cookies are filled with pumpkin cinnamon buttercream and are the perfect pumpkin-shaped fall cookie!

I never want to sit in a car ever again. Ever. OK, that's not totally true because I've obvi got places to go and people to see, but after driving alllll the way from Boston to Richmond, VA, and back again, my butt hurts. It could also have something to do with the fact that my dog basically slept on my lap for the entire 12+ hours each way, but she was so sweet and cute and NOT barking or crying, so I wasn't about to move her.

But legit, that drive is no joke and I say that as a person who merely sat in the passenger seat while my amazing husband drove the entire way. Other than not having to be behind the wheel (in the rain, omg the rain), the only things that can make a 12-hour car ride semi bearable are as follows:

I will admit that I go WAY overboard on packing food for road trips. I basically pack like we're going on a month venture trip into the wilderness with no hope for sustenance aside from what we carry with us. And then, without fail, the coolers and bags of food that I bring end up buried under our suitcases and bags of shoes in the way back trunk, never to be reached while the car is in motion.

That's why I always try to remember a simple rule: Always keep a Tupperware of cookies in the front seat. For drive-time emergencies and all that.

You can consider this recipe major follow-through from my post back in June when I made Lavender Lemon Cookies and said, "Come fall, I’m already planning to make little pumpkin linzer cookies with a cinnamon pumpkin butter filling. You can hold me to that." I literally said that. And I also literally have not stopped thinking of pumpkin linzer cookies since June. And now I'm here to deliver.

I personally think these cookies are super cute (#humblebrag), but even better? They're super easy to make! I don't make a lot of "cute" baked goods because they never seem to actually come out cute for me, so if I can make these cute cookies, you can, too!

The cookie dough comes together quickly and then after chilling, it's pretty easy to roll out and cut into shapes. Since these are pumpkin spice linzer cookies, I highly recommend making them in the shape of pumpkins, but if you wanted to make a more traditional linzer cookie shape or a ghost or a heart, anything goes.

I got a set of three pumpkin cookie cutters on Amazon, which aren't available anymore, but this set (affiliate link) should work, too.

While the cookies are baking, you can make the super easy filling. Which just happens to be a super pumpkin-y pumpkin buttercream with cinnamon that I would have eaten with a spoon if I didn't have cookies to make.

But instead, I diligently filled my pumpkin-shaped cookies and waited until all twelve were complete before licking the bowl clean.

And then I allowed myself one cookie and I allowed Chris one cookie, before packing up the rest of the pumpkin spice linzer cookies for our road trip. But omg they were good. They had the perfect amount of crunch and the best intensity of pumpkin spice flavor.

I almost has to ask Chris to hide the cookies from me before we left on our trip. But I knew that instead of hiding them, he'd probably just eat them all. Between the two of us, we probably require some sort of childproof cookie jar (that's gotta exist, right??).

And guess what? I then idiotically packed the Tupperware full of cookies in the very back of the car, under a giant bag of dog treats. But that's OK because it meant that when we got to Chris's family's house, we still had a full Tupperware to share with everyone.

And I was much happier sharing these pumpkin spice linzer cookies with family than sitting in a car stuffing my face with them while singing "Satisfied" from Hamilton with powdered sugar covering my face.

Not that that doesn't sound like a seriously lovely experience. After 12 hours in a car, I was willing to do pretty much anything for a little entertainment that doesn't include critiquing everyone else's driving skills (verdict: most people don't know how to drive. People from Massachusetts/New England actually do know how to drive... they're just jerk drivers... Not sure what's worse).

Seriously though, I'm all set with being in a car for now.

But I'm thrilled that fall has just begun (um, it was 80 degrees in Boston today... but will be in the 60s tomorrow!) and there's still plenty of time left for these Pumpkin Spice Linzer Cookies.

You better believe I'll be making them again before the season is over. But for now, I'm starting to plan my holiday linzer cookie recipe.. I'm thinking either candy cane or cranberry, but will obviously update you soon!

What are your favorite road trip snacks?

If you're looking for more fun pumpkin treats, be sure to check out my Pumpkin Cinnamon Rolls and Pumpkin Eggnog Danish. I also love these Chocolate Pumpkin Butter Cups from Build Your Bite! 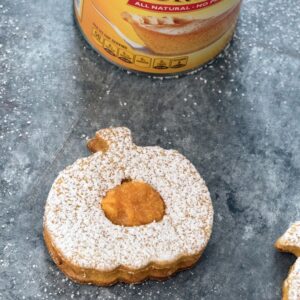