Thank you to Cyverasia for sponsoring this post in partnership with the NYC Dumpling Festival! As always, all opinions are my own!

Happy Monday! I hope that wherever you spent your weekend, the weather was as glorious as it was in the Boston-area. In many ways, it still felt like summer, but with a nice light fall breeze. I’m one of those people who never gets too hot and really prefers the weather to be 90+ degrees (I don’t even mind humidity… Except my hair definitely does. But that’s what braids are for). But even I have to admit that this is the best weather in the world. It makes me soo happy to be in New England. Which is probably the point… Mother Nature is basically saying, “here’s some glorious weather so you don’t all move to California. Please try to remember how awesome this is because the next 4-5 months are going to be doozies."

Clearly, I already have Thanksgiving on my mind (but when do I not??) and am currently thinking of a zillion ways to incorporate my favorite flavors into recipes. I was invited to the NYC Dumpling Festival this Saturday, but sadly can't make the trip from Boston. But since Saturday also happens to be the very first National Dumpling Day, I thought it would be fun to create my own dumpling recipe, including actually making my own dumpling wrappers!

But if you are in the NYC-area, you should definitely hit up the festival (it's happening from 12:00-5:00 p.m. at Sara D. Roosevelt Park). Not only will you have the chance to try dumplings from around the world, but you’ll also get to experience a record-breaking “dumpling eating contest,” a giant dumpling cutting ceremony, a live cultural performances, and more! Plus, 100% of proceeds from tickets sales will be donated to the Food Bank for New York City.

If you can’t make it, you can hang out with me and make your own dumplings instead!

I did a lot of research before making my dumplings. And I even bought wonton wrappers from the grocery store… Just in case. You can most definitely use wonton wrappers to make dumplings; lots of people do! But in honor of the dumpling festival and National Dumpling Day, I really wanted to try from scratch. And guess what? It’s not that tough! The dough is simple enough and contains just flour, water, and salt.

And rolling out the rounds was actually really fun. You have to roll from the edge to the center and constantly turn the round. Basically, you want the wrapper to be thin around the outside and a little thicker in the middle, so they’re sturdy enough to hold the delicious filling.

You can fill a dumpling with anything you want. Pork and cabbage seems to be the standard traditional version. But I decided to go a little bit outside of the traditional and gave my dumplings a Thanksgiving autumn-style flair with turkey and cranberries. I did add cabbage, too. Since cabbage holds a lot of water, you’ll need to get rid of some of it before adding it to your dumplings. I shredded mine in the food processor and then squeezed the water out of it. I was shocked by how much came out!

Then I mixed the cabbage with ground turkey, cranberries, soy sauce, sesame oil, rice vinegar, and a little Sriracha for some kick!

I didn’t get very fancy with my dumpling design. I simply folded around the filling and sealed with a little bit of water. One of the reasons I’d love to attend the Dumpling Festival is to see all of the different dumpling designs! Maybe next time I’ll try some pleats, but for now, I was just happy that I was able to fold a decent-looking dumpling.

I boiled some of my dumplings and pan fried others. Both were delicious, but my pan fried dumplings were definitely a whole lot prettier! Pan frying dumplings is definitely an art and took a little practice on my part. Adding water to oil is always scary, but I eventually got it down!

I also infused my soy sauce with a little bit of sage.

And then I had my own little dumpling festival right in my kitchen!

Hey, one variety of dumpling is better than none, right? But now that I have one variety down, I feel pretty confident that I could riff off it and make many more.

One of the main reasons I’m sad to be missing the NYC Dumpling Festival is because I’d love to see the dumpling eating contest. Molly Schuyler holds the current record of 90 pieces in two minutes. 90 dumplings!!

Here’s the scene from last year’s contest. Everyone has their game faces on!

OK, but really? I could totally eat 90 of these dumplings. It might just take me a liiiittle bit longer than two minutes. Holy mackerel.

My recipe only makes about 24 dumplings, so I’d definitely have to get my rolling pin out again. But it would be worth it. Honestly, I’m so happy I didn’t end up having to use the store-bought wonton wrappers and made these dumplings with my own dough.

So,  you’re probably wondering how the filling was...

I absolutely loved it!

Those cranberries gave the dumplings a delightfully sweet tartness, while the Sriracha gave them a touch of heat. The turkey was the perfect backdrop for the flavors to all come together.

And the soy sauce just had the lightest touch of sage. Perfect for dunking.

I’m SO happy my first real dumpling-making experience was a success. The next time I have a dinner party, it’s quite likely that I’ll be serving dumplings as an appetizer.  This Saturday, I’ll be following along with the #‎dumplingfest2015 hashtag and being sad I’m not at the festival.

Let me know if you’re going to the Dumpling Festival and please send dumpling updates. And dumplings. Preferably 90 of them. Actually, make it 91 and the world record will be mine!

Have you ever made your own dumplings? 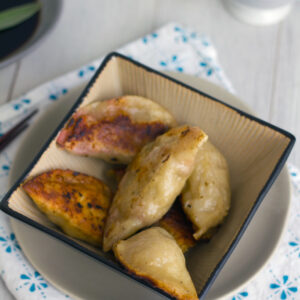 These homemade Chinese dumplings are given an autumn-twist with turkey, cranberries, and a sage-infused soy sauce.
5 from 2 votes
Print Pin Rate
Course: Appetizer
Author: We are not Martha

Full disclosure: Thank you to Cyverasia for sponsoring this post in partnership with the NYC Dumpling Festival! I’m sorry I can’t attend and hope the event is a huge success!