How could you resist delicious vanilla cupcakes topped with a full-flavored chocolate red wine buttercream?

In an ideal world, we would put wine in everything. Well, maybe not everything because that could get weird. Couldn't it? I mean... wait. Is there anything wine wouldn't be good in? I'm honestly struggling to come up with anything here. Coffee? Let's go with coffee. But no, coffee wine is actually a thing, so even that doesn't work. Maybe milkshakes. I probably wouldn't put wine in a milkshake. So, I think my point is that wine goes with almost everything. And we should take advantage of that.

If you've been reading here for a while, you know that my friends, Kyle and Jeff, throw the best parties and that those parties typically involve wine (exhibit a, b, and c). And the most ridiculously awesome food you've ever seen. This weekend was their 5th annual wine pairing party and was definitely the best one yet (and that's saying a lot!). Over the years, I've brought dessert to the party and I typically try to incorporate wine into the dessert in some way. I've done red and white wine cupcakes and red wine truffles. This year I went with Mini Vanilla Cupcakes with Chocolate Red Wine Buttercream.

On the surface, the vanilla cupcakes are really nothing overly special, though I did add a double dose of vanilla into them because I wanted them to be full flavored. I almost used Wilton's Champagne flavoring in the cupcake batter, but then I wasn't sure it would be appropriate to combine champagne and red wine into one treat. Though I'd totally argue that they go fabulously together! But the chocolate red wine buttercream is really where it's at with these cupcakes. You need to try these!!

I made mini cupcakes, but this recipe is the same for mini or regular sized. Just make sure to pay attention to the baking time differences below!

In the bowl of a stand mixer or in a large bowl with a hand mixer, cream butter and granulated sugar together, until it's light and fluffy. In a separate medium-sized bowl, whisk together the flour, baking powder, and salt.

Then, slowly mix the dry ingredients into the butter and sugar mixture, alternating with  whole milk. Add vanilla and mix until just blended.

I love making cupcakes with the egg white method. All you have to do is beat egg whites with a hand mixer or whisk (you gotta have a lot of arm strength to do it by hand!) until stiff peaks form. And then gently fold the egg whites into the batter, until just blended. This helps make the cupcakes extra light and fluffy.

In a lined cupcake pan or cupcake pan sprayed with cooking spray, fill about ¾ of the way full with batter. I have a seriously ridiculous amount of baking supplies (honestly, once I organize them, I need to take some pictures), but for some reason, I do not have mini cupcake papers. I just sprayed the pan with cooking spray and they came out perfectly fine.

Bake the cupcakes at 350 degrees for about 15-17 minutes, until a toothpick comes out clean. If you want to make mini cupcakes instead, they should only need about 9-11 minutes in the oven. Cool the cupcakes in tins for a few minutes before removing to wire racks to cool completely.

While the cupcakes are baking, I whipped up the icing. I've made SO much buttercream frosting over the past couple months and I feel like I finally have my ratios where I want them. This threw me off a little bit since I added more liquid than usual with the red wine, but it piped onto the cupcakes wonderfully.

In the bowl of a stand mixer or in a large bowl with a hand mixer, beat butter until creamy. Then slowly blend in powdered sugar, cup by cup until it's well-combined.

Mix in vanilla and ¼ cup of red wine. If your buttercream is too thick, add another teaspoon red wine at a time. The more red wine, the better! But still... you don't want your frosting to be too runny or it won't pipe well. Plus, the less you put in the buttercream, the more you can straight drink!

Now, remove half of the buttercream to a separate bowl. Add ¼ C cocoa powder to mixer with remaining red wine buttercream and beat until well combined.

To pipe the swirl design onto the mini cupcakes, I simply took one pastry bag fitted with a coupler and tip and filled with halfway with the red wine-only buttercream on one side and the chocolate red wine buttercream on the other. It helps if you place the pastry bag in a drinking glass to fill. Martha Stewart has a good tutorial, but she recommends piping the two frostings into a third bag... And I didn't really feel like using three pastry bags for this, so I just scooped the frostings into one bag instead.

I used Wilton tip #2A (affiliate link). If you're making full-sized cupcakes, you'll probably want to use #1A (affiliate link). Starting at the outside edge of the cupcake, pipe red wine buttercream in circular fashion all the way around until you get to the center. Continue to squeeze as you lift the tip.

I should mention that for the wine, I used La Maialina Gertrude Toscana, which is a dry red wine and one of my family's favorites. Partly because of the adorable bottle. And partly because it's a good every day wine that is reasonably priced and delicious-tasting.

I also forgot how much I love mini cupcakes. You can pretty much eat these in one bite if you're feeling bold. Otherwise, two bites. And then you can have another. And maybe even another after that.

And not using cupcake papers just means that you can gobble them up faster. Although, edible cupcake papers do exist. Which I simultaneously think is really weird and really awesome.

Cupcakes, cake, and frosting have consumed so much of my life lately. And I don't see that slowing down any time soon. Hopefully my metabolism won't either...

I was really happy to see that lots of the red wine buttercream cupcakes had disappeared by the end of the evening. This may not be a feat your average other party, but Kyle and Jeff serve some of the best food you've ever seen or tasted. I didn't photograph everything this year, but I do have to share the mini eggs Benedict that Jeff added to the menu this year.

Not only did he make homemade mini English muffins, but he actually smoked his own bacon!! And, of course, poached all those little quail eggs individually. I'm still mad at myself for thinking I could go back for more after trying everything else at the party- everyone seriously devoured these.

OK, now I'm starving and feel like I need more of those eggs Benedicts before I eat more cupcakes and red wine buttercream. Do you think Kyle and Jeff will let me move in?? Only half kidding...

Can you think of anything that wine doesn't go with??

If you like these vanilla cupcakes with chocolate red wine buttercream, be sure to check out my Red Wine Chocolate Mini Layer Cakes. I also can't wait to try these Cupcakes with Mulled Wine from Blueberry Vegan! 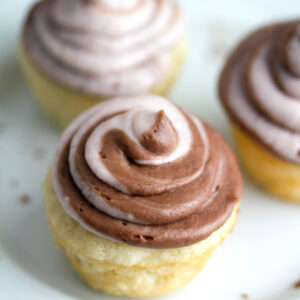