Have you ever had a classic soda shop egg cream? Believe it or not, they don't involve eggs! This Vanilla Egg Cream recipe is super simple and packed with vanilla flavor.

(This Vanilla Egg Cream recipe was originally published in November 2012, but was updated with new photos in 2019).

I owe much of who I am today to Harriet the Spy (affiliate link because even if you're not a kid anymore, you should still read that book!). Not even kidding. I could write volumes on good old Harriet and I truly believe she contributed greatly to making me, me. She was a truly independent and precocious girl; interested and observant. After reading Harriet the Spy, I started my own spy notebooks and I even tried to play her game "Town," which really is like your own made-up version of The Sims before The Sims existed.

I filled notebooks with my observations. I kept my own journals from the day I turned seven straight through college. Then I started blogging; another method for me to share my observations. Unfortunately, my spy days didn't last long when I was a kid, since I lived in small town Massachusetts and not New York City like young Harriet. But my love of writing and being a constant observer remained. I'm pretty much downright nosy. Which I believe makes me a better writer.

My point of telling you all this is egg creams. Harriet the Spy had a love of egg creams and when I was a kid, I was intrigued with them for a long time. I'll never forget taking a trip to New York City with my family and seeing egg creams on the menu of a restaurant we were at. I had wanted to try them forever and it was finally my chance. I imagined an egg cream would be like a nice thick, creamy milkshake. But I was wrong. And I was shocked to learn that egg creams don't even have eggs in them. But they do have club soda. It ended up being nothing like I imagined, but I still loved it, partly because it brought me closer to Harriet.

WHY ARE THEY CALLED EGG CREAMS?

Good question! But guess what? Nobody really knows for sure. There are a few theories. Some say it's because the drink was based on popular soda shop drinks that included eggs, but during the Great Depression, expensive eggs were replaced with milk. Others say that when Jewish actor Boris Thomashevsky traveled home from Paris to New York, he asked for a "chocolat et crème" and it was misunderstood as "chocolate egg cream."

Whatever the case, you should know that egg creams do not have any eggs in them. I have a feeling people probably often shy away from them due to the name, but those people are definitely missing out!

When Quirk Books sent me a copy of Pure Vanilla (affiliate link) by Shauna Sever and I saw the Vanilla Egg Cream recipe, I was immediately all over it. I haven't has an egg cream in years and wanted to go back to my Harriet the Spy roots. So, I jumped right in to this simple Simon, but very necessary to my life, recipe.

First things, first, let's chat about vanilla beans a little bit. Though I love using vanilla beans when baking, I definitely use way more vanilla extract (my mom makes it herself, so I always have a nice stock of it!) since it's less expensive.

However, when baking a dish (or making a simple syrup) where the vanilla flavor should really star, vanilla beans definitely have more of a flavor impact.

Here are a few tips for baking/cooking/cocktail-ing with vanilla beans:

Start by bringing sugar and water to a boil in a saucepan. Then lower heat to a simmer and let cook for about 10 minutes. Remove from heat and let cool in the saucepan for another 10 minutes.

Slice your vanilla beans in half.

Pour the simple syrup into a heat-proof jar or container and place sliced vanilla bean in container. No need to scrape out the seeds, though I did scrape a little bit when it was done steeping, mostly because I wanted some of the vanilla bean flecks in the syrup.

Let the vanilla simple syrup steep in your fridge for about 24 hours.

Now you're ready to make the actual egg creams. Pour the vanilla simple syrup and half and half in a glass and then top with club soda. Add in a straw because what's a soda shop drink without a straw?

Though she generally drank chocolate egg creams, I think it's safe to say Harriet would be impressed with this drink. Perhaps we could even get her to move beyond tomato sandwiches and start baking with vanilla beans.

OK, now that I've thoroughly embarrassed myself by gushing about my obsession with Harriet the Spy, I'm going to shut up now. But come on, I can't be the only one, can I?

I almost drank the vanilla simple syrup straight up out of the jar. Not even lying. I'm not a fan of fake-like syrups and hate when I order a flavored coffee and it's packed with lots of artificial overly sweet stuff. This? This tasted real. Because it was. Most definitely putting some in my coffee this week (and I don't even use sugar in my coffee!). And everything I make for the next year.

The vanilla egg cream was near perfection. Simple for sure, but refreshing and packed with perfect vanilla flavor and just a little bit of creaminess. And you know... you could totally add that vanilla simple syrup to some vodka and have your own homemade vanilla vodka. I'm loving that idea. Obviously. Also, egg creams are probably better without actual eggs in them, amiright?

Now I just need to get out my spy notebook and make myself a tomato sandwich and I'll be back in full-on Harriet the Spy mode. Just kidding, I'm way too busy making plans to open my own egg cream only soda shop. Next up? I need to make a chocolate egg cream!

If you're looking for more vanilla-forward recipes, check out my Vanilla Latte Doughnuts or my Vanilla Whiskey Sipper (the drink also uses the same vanilla simple syrup from this egg cream recipe!). I also really want to make this Vanilla Bean Caramel Sauce from Tara's Multicultural Table! 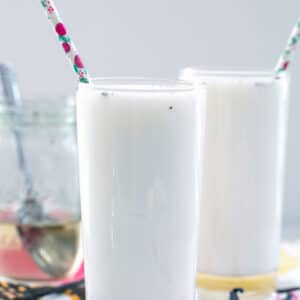