These Cherry Lime Pop Tarts are super similar to the pop tarts you buy at the store, but with a more adult, deliciously tart flavor! Made with an easy cherry lime jam and a simple dough recipe, they'll have you falling in love with pop tarts all over again.

Pop Tarts are one of those foods that I don't want to admit I like. But I really, really do.

I was never allowed to have them as a kid and I don't ever buy them now. But occasionally I'll be somewhere that has them and I can't resist indulging. And yup, I still love them and I don't even discriminate in terms of flavor...  From strawberry to s'mores to brown sugar cinnamon, I love them all.

Though I admit I refuse to try the Jolly Ranchers or the soda flavors (TOO far). Also, don't come at me with your unfrosted Pop Tarts.

However, these cherry lime pop tarts are probably about as close to Jolly Ranchers flavored as you can get... But with all natural flavors!

They're made with a bold slightly tart cherry lime jam and a sweet cherry icing on top. Plus a super easy to make dough.

I've made my own pop tarts several times over the years, but I made a few tweaks in this dough recipe to try to get them as close to the originals as possible (rather than Toaster Strudels, which are also delicious, but a bit flakier than what I was looking for).

Mission accomplished and my Pop Tart craving has been satisfied for at least a little while.

How to Make Cherry Lime Jam

These cherry pop tarts are super easy to make, but do require a little bit of time if you're making the filling from scratch. Which you definitely should since I don't think you can easily find cherry lime jam in stores.

But don't worry; it's a super simple jam that just requires 3 ingredients and no pectin. It's just:

Really, the only time-consuming part of it is pitting the cherries and waiting for the jam to cool once it's done.

Just add the pitted cherries, sugar, lime juice, and lime zest to a saucepan and bring to a boil. Once boiling, lower heat to a simmer and let cook for about 20-25 minutes.

I recommend roughly chopping your cherries before adding them to the pot. I didn't do that here, but did use a potato masher to mash them while they were cooking.

The jam will need to cool so it can finish thickening. If you follow my recipe, you'll definitely have more jam than you need. Enough for at least 2 batches of pop tarts.

Or one batch of pop tarts and a lot of delicious peanut butter and cherry lime jam sandwiches.

How to Make Pop Tarts

The cherry lime pop tart dough is also easy, but I think it's easiest if you have a food processor. If you don't, you can just use a large bowl with a pastry cutter (I like this one) or just your fingers.

Simply, combine the flour, sugar, and salt together. And then cut in the chilled cubed butter until mixture resembles coarse meal.

Add in the beaten egg and milk and take the dough out of the bowl and knead for a bit so it all comes together. Wrap it in plastic wrap and then chill it for about 30 minutes.

Then you're ready to roll the dough out on a lightly floured surface. I hate having to roll dough to exact length and widths, so I just rolled my dough in a big rectangle that was about ⅛" thick. Then I cut out little rectangles about 5 x 3 ¼". I rolled the dough out a couple times to get about 14 rectangles.

Place rectangles on a parchment paper-line baking sheet and place in fridge for another 30 mins.

Once chilled, top half the rectangles with about 1 Tbsp of the jam and then top with a second rectangle. Use a fork to crimp the edges and add a little vent on top. Brush lightly with a beaten egg.And baked at 350 degrees for about 20 minutes until they're just turning golden.

Let the pop tarts cool completely before frosting them.

But while they're cooling, make the icing! I simply blended cherries and milk until the mixture was pretty smooth and then whisked in confectioners' sugar.

Drizzle cherry icing over each of the pop tarts and top with sprinkles if you desire. And yes, I always desire sprinkles.

These cherry lime pop tarts are as close to the actual brand name pop tarts that I've ever made. But in my ever so humble opinion, just a little bit better.

Better because instead of being super sugar packed, the cherry filling has more of a bold grown-up flavor to it. I'm all about a little bit of sweet and a little bit of tart, so these are right up my alley.

Also, now that you have this pop tart dough recipe down, you can make any flavor pop tart you desire!

I still don't know if I'm a pop tarts for breakfast person... But these also make for an awesome dessert and an even better mid-afternoon with a cup of coffee snack.

I have lots of fun recipe ideas that I may not necessarily make for a regular breakfast... But for a brunch with friends? Definitely! These unique recipes will make your brunch party extra exciting:

I'm going to miss cherry season so much! The cherries in these cherry lime pop tarts were actually sent to me by Northwest Cherry Growers (this post isn't sponsored though).

They sent me about 20 pounds of cherries and I ate a ton of them, shared some with my family, and pitted and froze a whole bunch more. So, that means I can enjoy cherries all winter long!

Something tells me I'm going to be making more pop tarts very soon... Maybe a spicy version is up next!

Were Pop Tarts a childhood favorite of yours? Do you still love them? 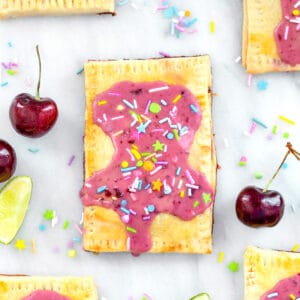 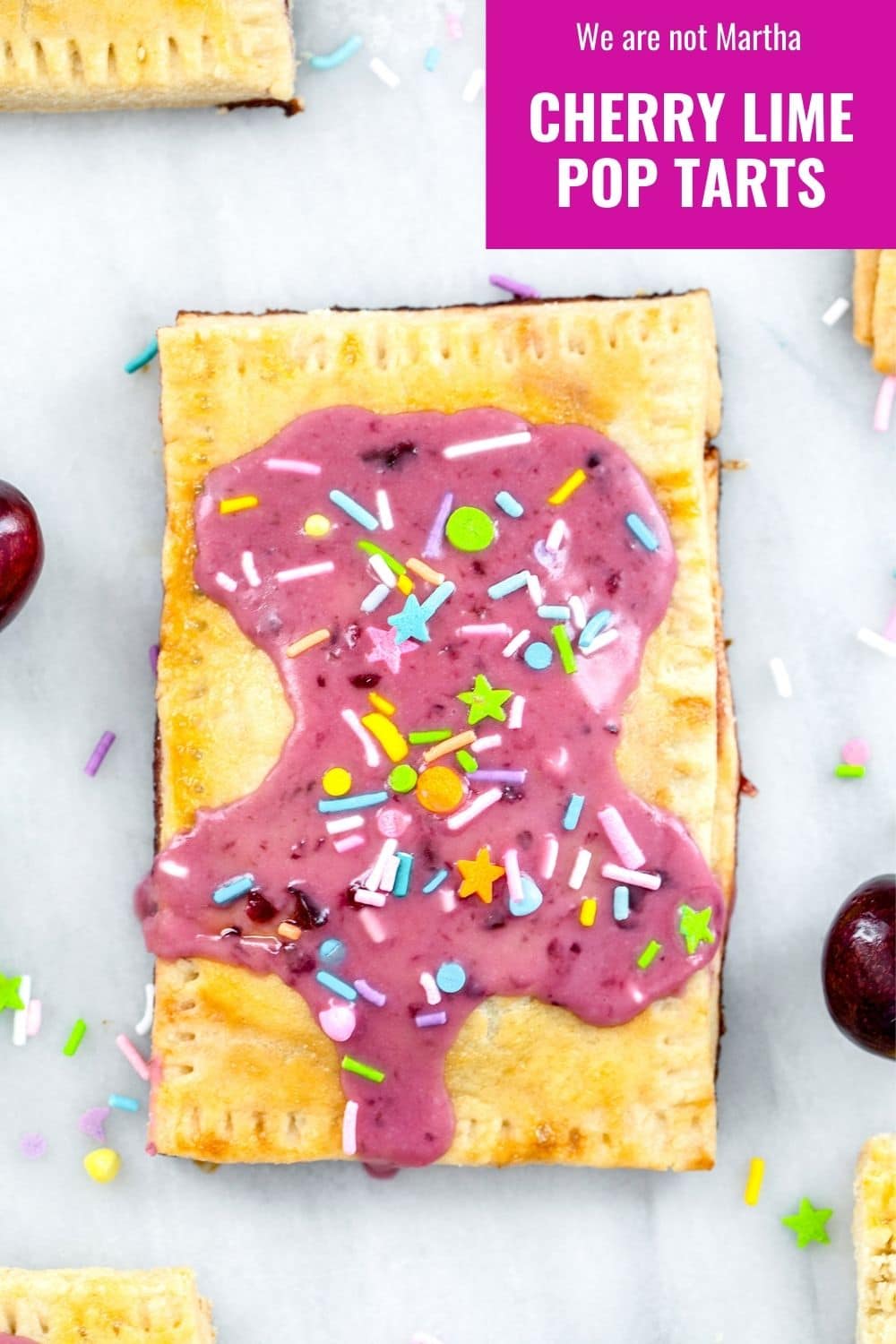