Not only is this eggplant parmesan incredibly easy to make and absolutely delicious, but the eggplant is baked instead of fried making it just a little bit healthier, too! 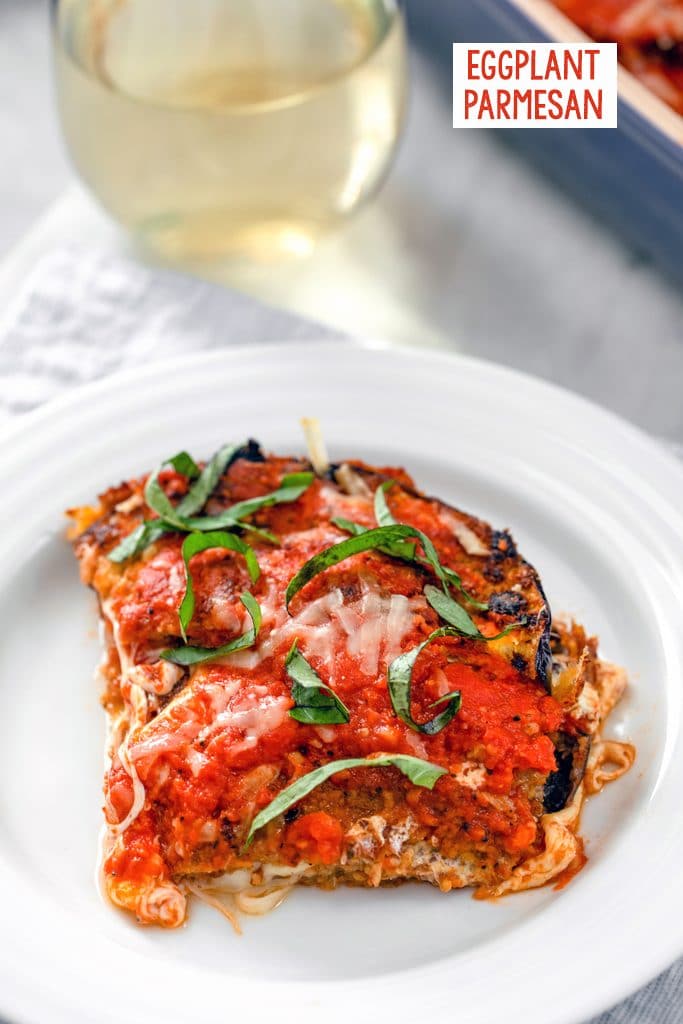 (This recipe for Eggplant Parmesan was originally published in January 2010, but was updated with new photos in 2019).

The other day I had a huge craving for Italian food. And eggplant parmesan sounded perfect. I mean, doesn't eggplant parmesan always sound perfect? I almost always order it when I see it on a restaurant menu and don't make it at home nearly enough. Probably because, sadly, Chris doesn't love it... But since I'm usually the one cooking, I decided to make what I like and I really, really like eggplant parmesan. Muhaha.

I'm considering this recipe a huge success in large part because Chris ate it and said he really enjoyed it. But also because I absolutely loved it and ate about a million servings and wanted to make it again ASAP. The recipe makes a big batch, but it also freezes really well, which means eggplant parmesan can be yours any time you want.

Contrary to popular belief, eggplant parm doesn't have to be super complicated and time-consuming to make. This one is actually pretty quick and simple! It also doesn't have to be terribly unhealthy. The special thing about this eggplant parmesan is that the eggplant is baked instead of fried. But you would never know! It honestly tastes just like it's been fried. I love when that happens.

One of the biggest issues people have with making eggplant parmesan is that it can be soggy. That's because eggplant has a lot of moisture in it and can soak up too much olive oil when cooking. Which is why it's important to drain the eggplant a bit before breading it. All you have to do is cut the eggplants into ¼" thick rounds and sprinkle a little salt on both side of them.

Place the rounds on a metal rack with paper towels underneath and let sit for about two hours. Pat eggplant rounds with a paper towel to get any excess moisture. 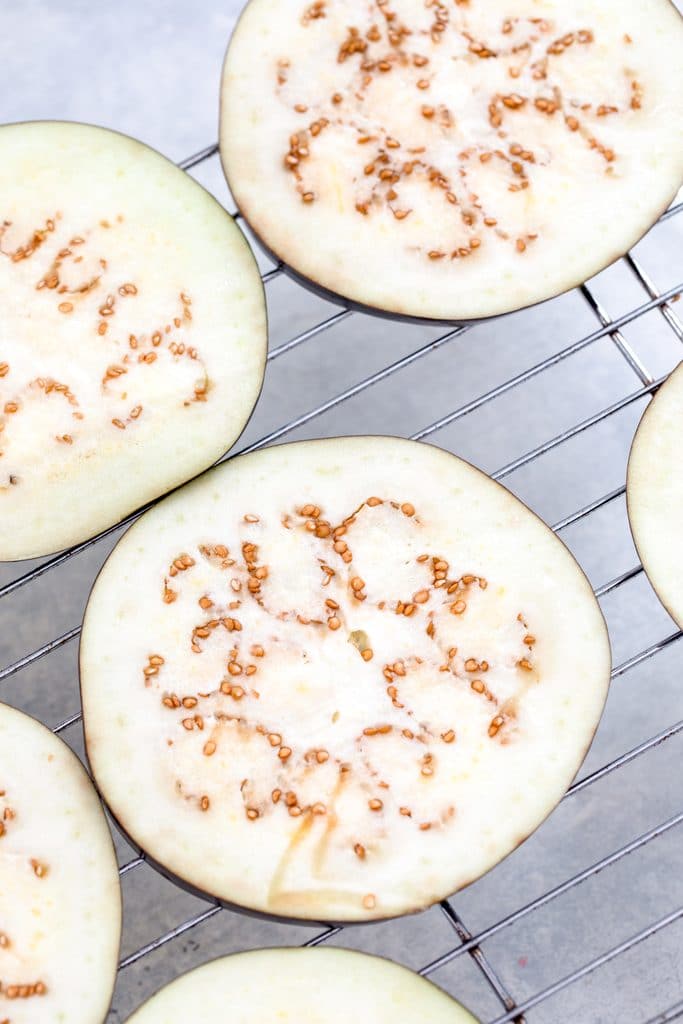 Pre-heat oven to 425 degrees and lightly brush a baking sheet with oil.

Next, put your flour, bread crumbs, and parmesan cheese in one large shallow bowl. In another, lightly beat the eggs.

Dredge a slice of eggplant in the flour mixture and then in the egg mixture. Lay on prepared baking sheet and drizzle each slice with a little bit of olive oil. 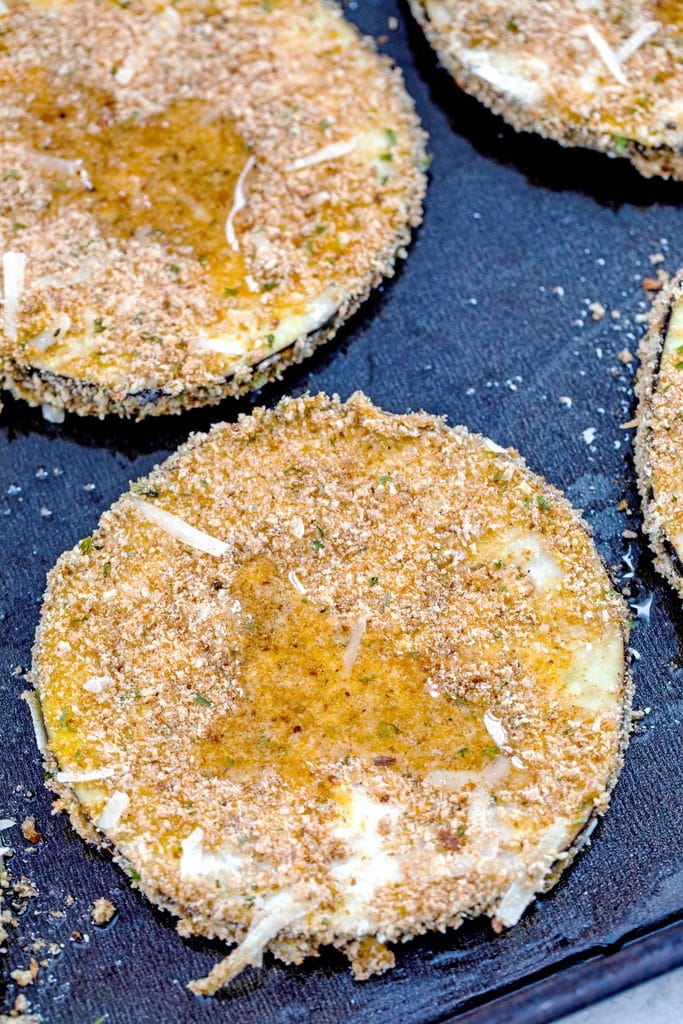 Bake eggplant for 18-20 minutes, until golden brown, flipping each eggplant slice after about 10 minutes. omg it was difficult not to just dig in and eat this eggplant as is. 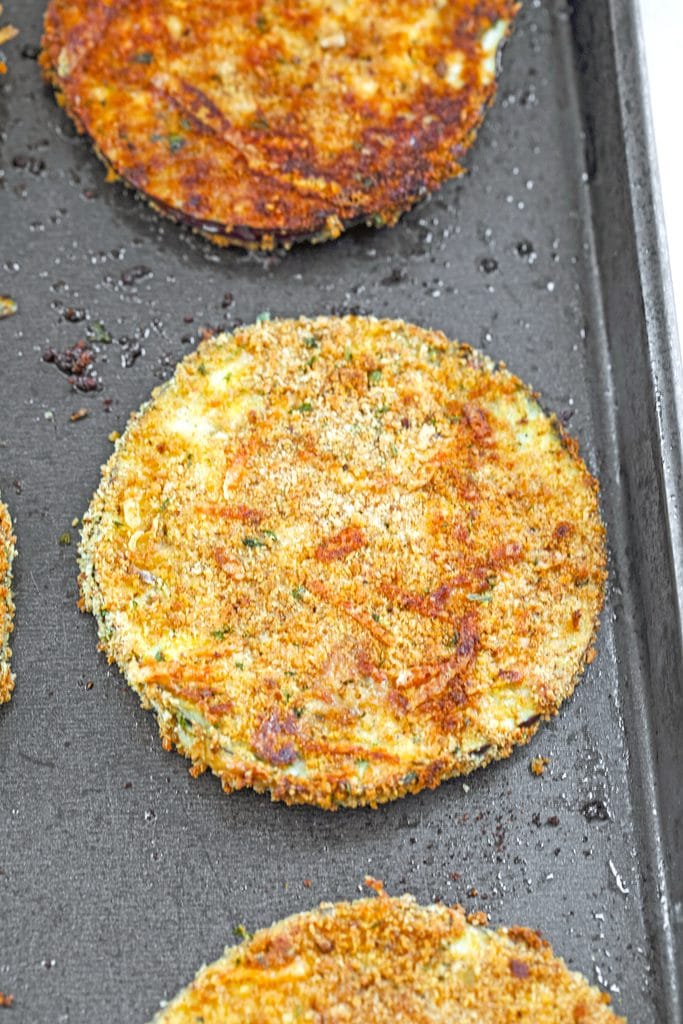 Once you remove the eggplant from the oven (and try really hard not to eat it), lower the heat to 350 degrees.

Spread 1 cup of the tomato sauce on the bottom of the dish. Then layer ⅓ of the eggplant slices and top with half the mozzarella. Sprinkle with ⅓ of the parmesan. Sprinkle with ½ the basil, too... You'll probably notice I sadly forgot to add my basil, but you most definitely should. 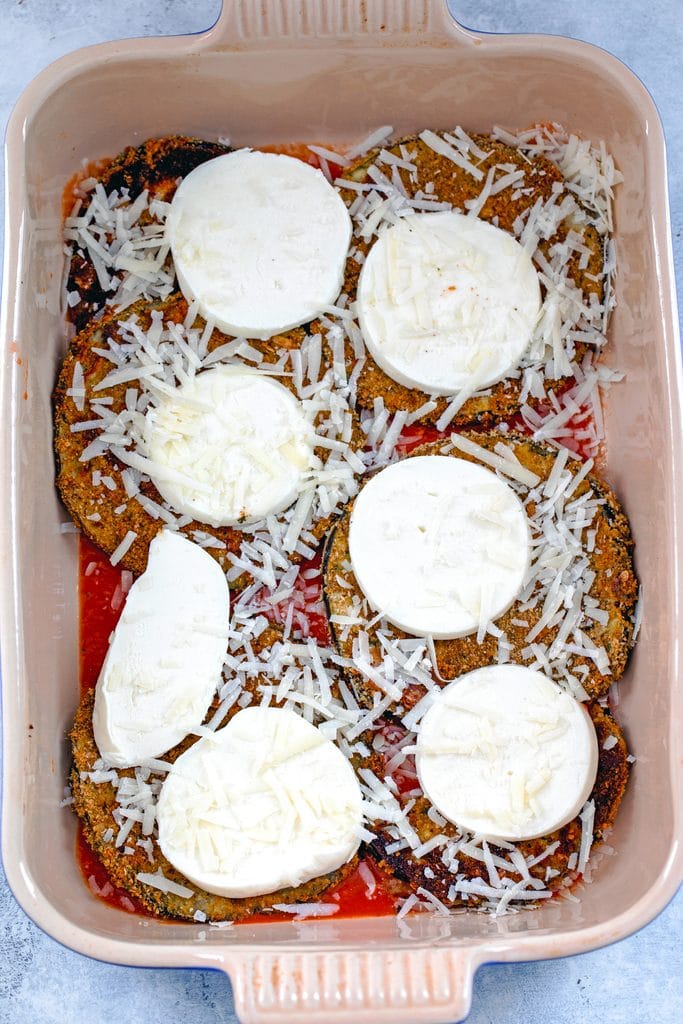 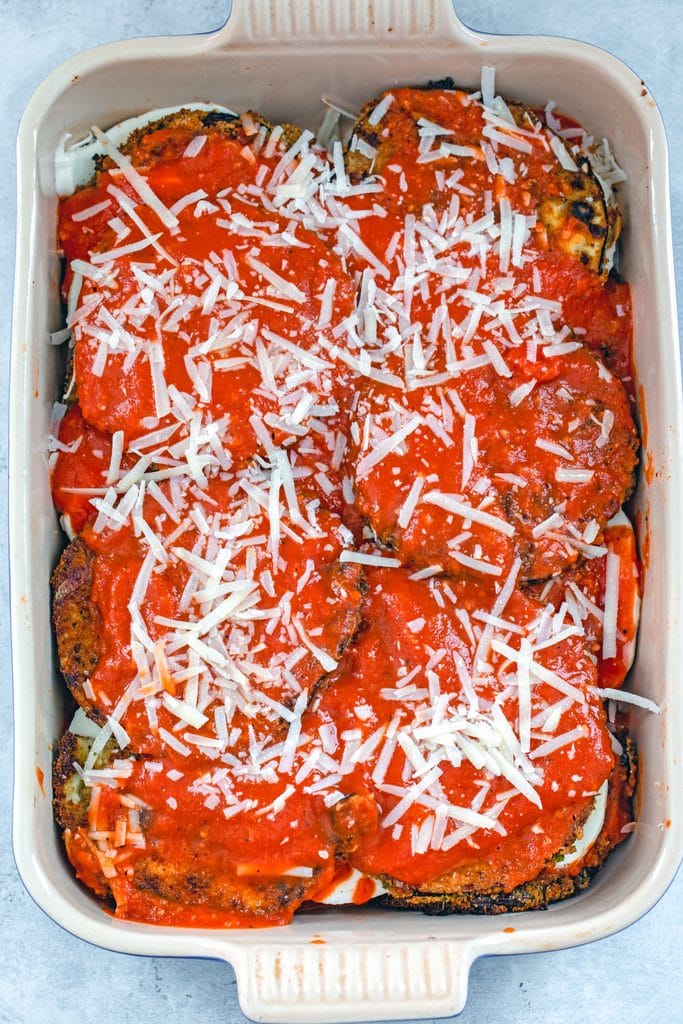 Pop it in the oven and bake (at 350 degrees) for about 30 minutes, until the cheese is melted and slightly browned. 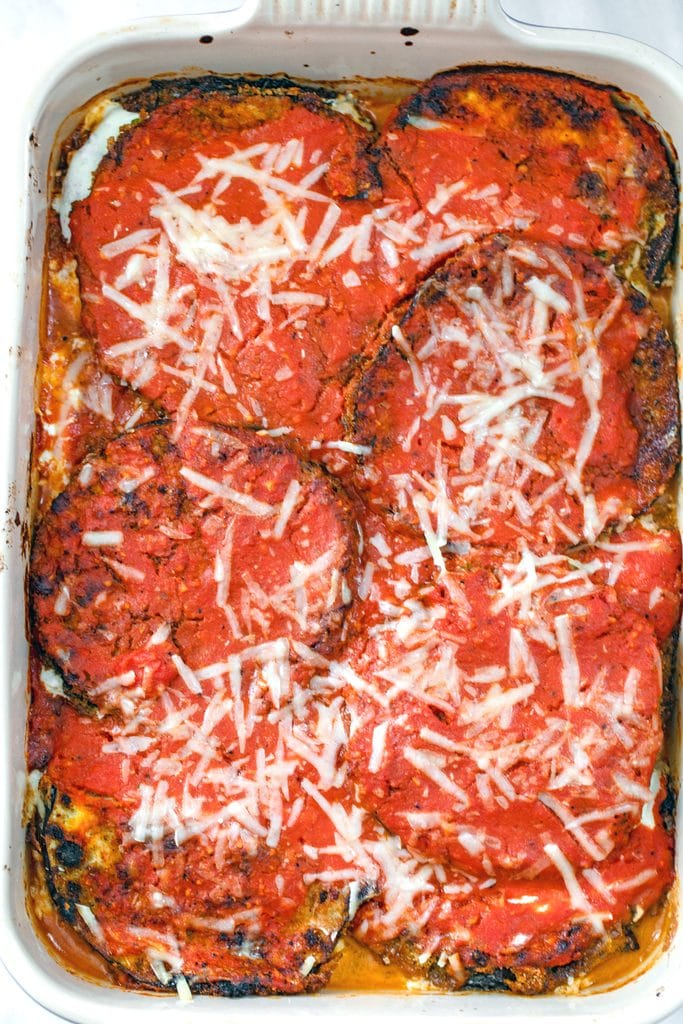 You're supposed to let it rest for about 10 minutes before digging into it. And you probably should because it's going to be really, really, really hot. Um yeah, I know from experience. It's sooo hard to wait though. And it smells soooo good.

And doesn't the melted cheese look so amazing? 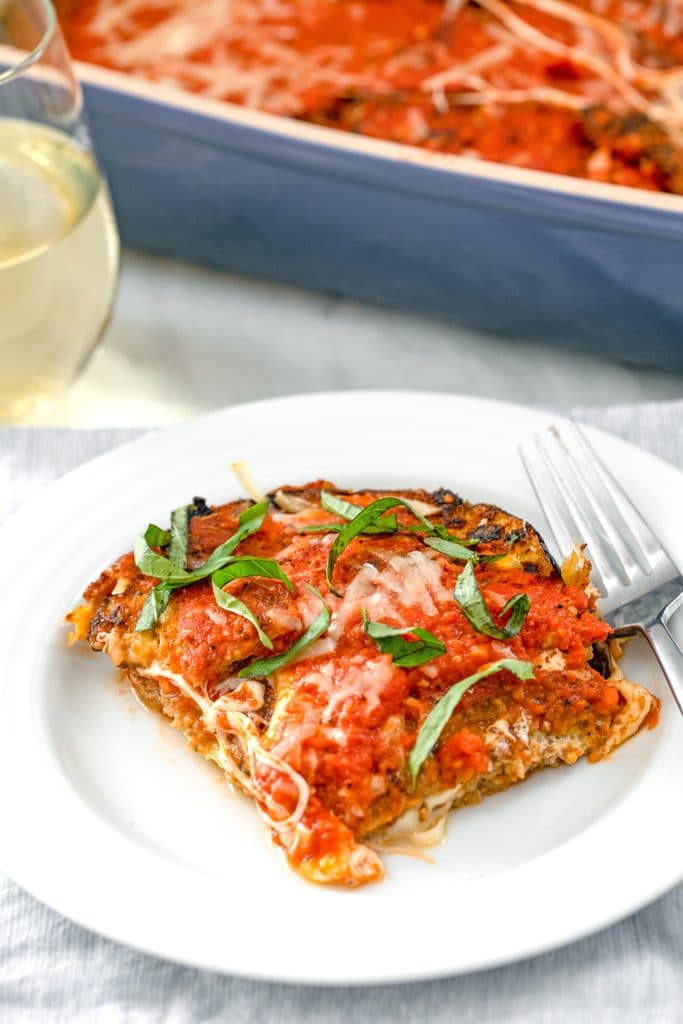 It tasted amazing too. This dish is seriously the perfect combination of eggplant, cheese, and tomato sauce. And it wasn't until I was done with my super-huge serving that I remembered I was also planning on making some whole wheat pasta to eat along with the eggplant parmesan but then totally forgot.

But it really wasn't missed at all as the eggplant was filling enough. Or maybe that was because I had 3 servings of it. Whatever. 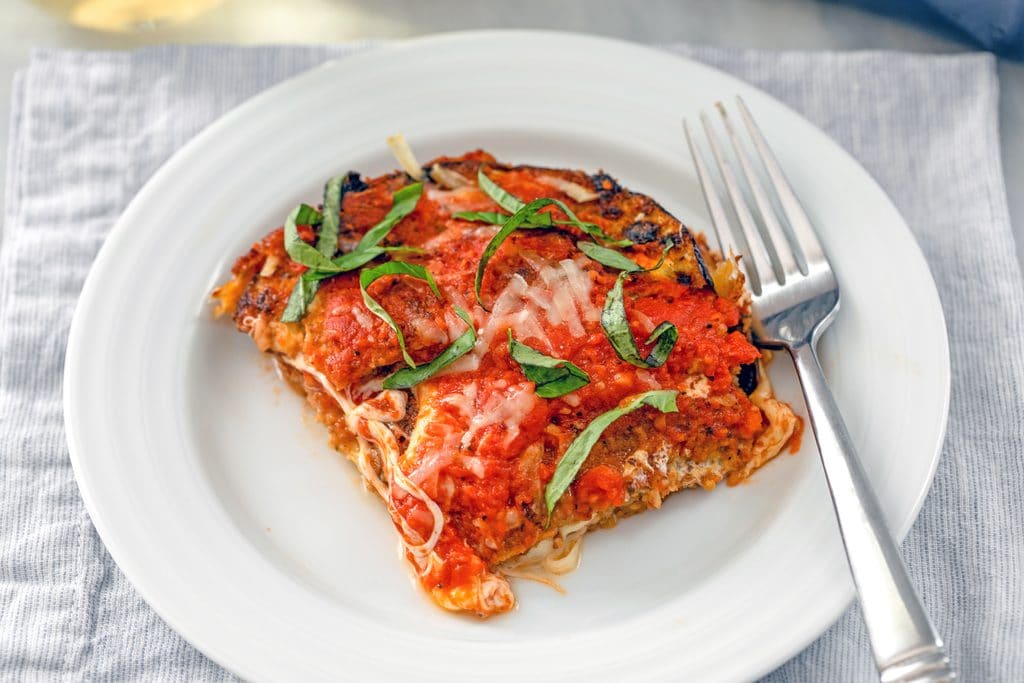 I should also note that this eggplant parmesan goes really, really well with a nice glass of cold white wine.

This is one of those easy dinners that doesn't look easy and would be so perfect for serving to company. In that case, I'd make the pasta and a salad and maybe even some garlic bread, too. And a couple bottles of white wine, obviously. 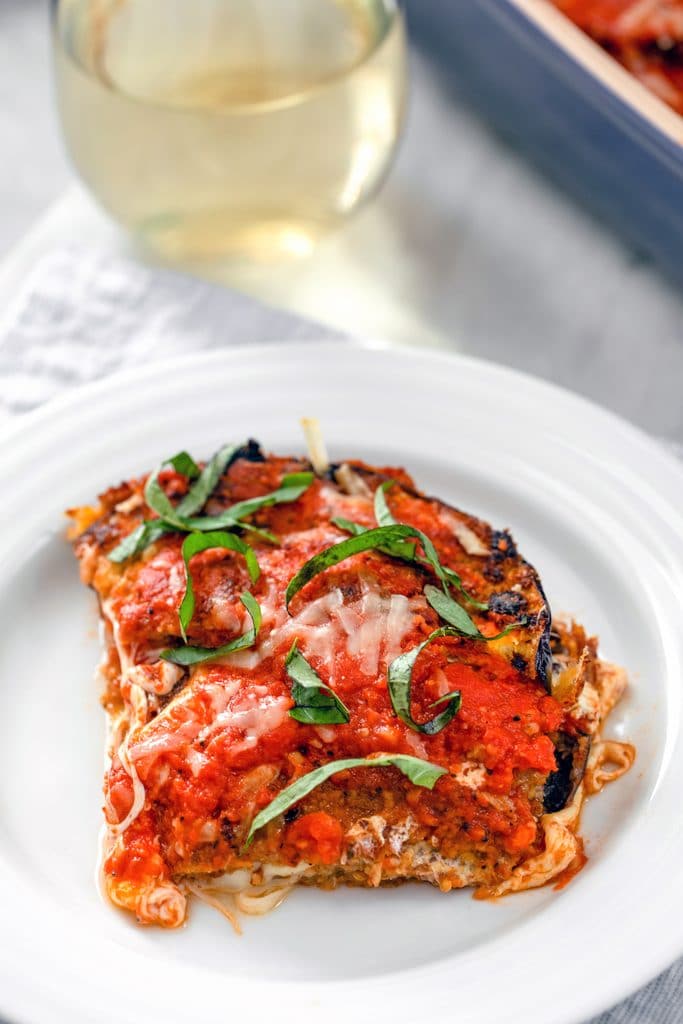 If you like this recipe, be sure to check out my Gorgonzola Meatballs with Creamy Tomato Gravy or my Steak and Cheese Fried Rice. I also really want to try this Eggplant Lasagna from Well Plated! 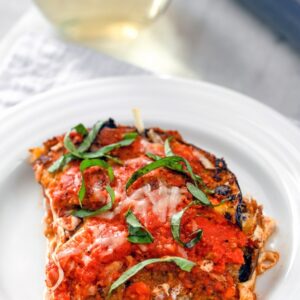