These Peanut Butter Blondies are packed with chocolate chips and covered in a rich chocolate ganache for a dessert bar that's better than a brownie!

(This recipe for Peanut Butter Blondies with Chocolate Ganache was originally published in May 2008, but was updated with new photos and content in 2020).

I just happen to love peanut butter and chocolate. I also love blondies and almost always choose them over brownies, especially if there's chocolate involved in some way. So, these Peanut Butter Blondies with Chocolate Ganache are pretty much a dream come true to me. A dangerous, dangerous dream.

If you've never made blondies before, you should know that they're just as easy as brownies... And peanut butter blondies are no different! Oh, and once you learn how to make chocolate ganache, you will be wanting to make it all the time and put it on everything!

Start by putting parchment paper in a 13x9 baking pan, buttering it, and pre-heating your oven to 350 degrees.

Beat together butter and sugar until it's nice and fluffy, 2-3 minutes. I like using my stand mixer for this, but you could also use a big bowl and a hand mixer.

Now it's time to beat in the peanut butte. I'm sure whatever kind you use will make your blondies taste a bit different. I usually use Skippy (Skippy for life!) and it works really well. If you use a more natural PB, these made not be as sweet, but that might be A-OK wih you!

Beat in the eggs, egg yolk, and vanilla. Then mix the flour on low until it's just combined, taking care not to over-mix. Fold in the chocolate chips. I used a little less than the original recipe called for since I like chocolate but don't like when I can't even taste the peanut butter. 1 ½ cups was the perfect amount for me, but add more if you want.

Spread the batter in the pan making sure it's super smooth on top and bake for 40-45 minutes, until blondies are golden.

Now comes the tough part... You want these to cool to room temperature before topping with ganache. And this could take about 1 ½ hours. But please don't get impatient because the chocolate ganache will not coat the blondies and firm up if you add it when the blondies are too warm.

When you are ready to make the chocolate ganache, all you have to do is put your chocolate chips in a heat-proof bowl. Put heavy cream in a small saucepan and bring just to a boil.

When your blondies are totally cool, pour and spread the chocolate ganache over them.

And give them another 15 minutes to rest so the chocolate can harden. You can put them in the fridge to speed this up even more.

Once the chocolate ganache is completely hard, you can remove the peanut butter blondies from the pan (by lifting parchment paper) and slicing them into squares.

I don't drink a lot of milk these days, but these are totally the kind of goodies that call for a cold glass of milk. Heavenly combination!

The blondies are super moist and crumbly and the chocolate rich in contrast to the sweet peanut butter. You could use a dark chocolate for the ganache if you want, but I actually loved the semisweet here (and it's rare that I love semisweet chocolate over dark!).

These peanut butter blondies with chocolate ganache are a great treat for bringing with you to parties and I also think they'd be one of the first baked goods to go at a bake sale.

Do people still have bake sales? On second thought, you probably won't want to sell a single one of these anyway.

I feel that the blondie is a forgotten dessert. In main part because people probably think, "why would I want a blondie when I can have a brownie?" Well, now I can tell you why. Because peanut butter, chocolate chips, and chocolate ganache.

I swear these peanut butter blondies will be more popular than any old brownie any day.

If you're still on team brownie, be sure to try my Chocolate Stout Brownies or my Reese's Pieces Peanut Buttery Brownies. Personally, I'm going all in on blondies and can't wait to try these Cranberry White Chocolate Blondies from The Baking Chocolatess. 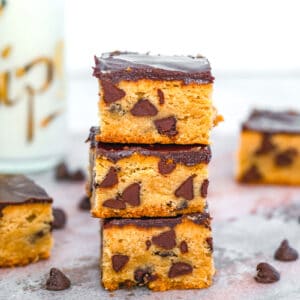