Packed with chocolate, marshmallow, and graham crackers, this S'mores Ice Cream is the perfect summertime treat!

(This recipe for S'mores Ice Cream was originally published in July 2012, but has been updated with new photos and content in 2019).

I can't believe we're already into July and I haven't made anything s'mores for you yet. I've actually made quite a few s'mores treats this summer, but haven't posted any of them just yet. So, hi!

Let's jump right into campfire season and chat about s'mores ice cream. I do feel that it's a bit ironic that s'mores are typically a summer treat and I really only make recipes involving them in the summer... But I always make them in my kitchen rather than over a campfire.

So technically, I could be eating these year round. But maybe that would ruin the magic of them? Nah, probably not. In fact, this s'mores ice cream is so delicious, I'm pretty sure I'm going to start making it year-round.

In the summer, I always like to have at least one kind of homemade ice cream in my freezer at all times and this has been one of the best. Chock full of s'mores goodies, like marshmallow fluff, milk chocolate, and graham crackers; it's now up there with my favorite s'mores recipes of all time.

But these Bourbon S'mores Milkshakes also rank pretty high on the list. Basically, you can't go wrong with anything involving chocolate, marshmallow, and graham crackers and I will never get tired of the combination.

This is a pretty typical egg-based ice cream and not difficult to make. The only difficult thing about it is waiting for it to freeze so you can dig in! As with most of my ice creams, I recommend starting it the day before you want to eat it so it has ample time to chill.

To start, you'll heat your milk, sugar, and salt in a medium saucepan over medium-heat. Stirring constantly, let mixture reach just the point of simmer and remove from heat.

While milk is heating, lightly whisk your egg yolks in a bowl to the side. Slowly pour about half of the warm milk into the bowl with the yolks, whisking continuously. Then pour egg/milk mixture back into the saucepan with the rest of the milk. This process is called "tempering" and allows your eggs to cook without shocking them and scrambling them.

Continue to cook over low heat for about 5 minutes, whisking all the while. The mixture will thicken, but don't let it thicken too much. When it coats the back of the spoon, remove from heat.

While the mixture is cooking, pour the heavy cream into large bowl. Strain the egg/milk mixture into the heavy cream, stirring all the while. Add in the vanilla extract and refrigerate. Let it chill for at least 4 hours.

Lots of people will recommend ice baths for this step and I used to do them all the time, but then I realized they were kind of pointless and not necessary to the success of the ice cream. However, if you want to chill your mixture as fast as possible, you can always set the bowl of cream in a large bowl of ice.

While you're waiting for that ice cream mixture to chill, you can prepare your marshmallow fluff. Making your own fluff is super easy, but if you prefer to just buy it, that's not a problem at all!

If you're making it, simply place egg whites, corn syrup, and salt in the bowl of a stand mixer or in a large bowl with a hand mixer and beat on high speed for 4-5 minutes until the mixture thickens quite a bit. It will have started clear, but after beating, it will turn bright white.

Beat in confectioners' sugar, vanilla, and cream of tartar on low speed, until combined.

Chop up your chocolate and break up your graham crackers into little pieces. The recipe calls for 8.8 ounces of chopped chocolate, which sounds like a random amount, but I used two of these XL Hershey's Bars (affiliate link), which is exactly 8.8 ounces.

You can certainly use less chocolate if you want... I wouldn't use more as this ice cream is already pretty packed! See the end of this post for all the products I recommend for this recipe!

Process the chilled ice cream mixture in your ice cream maker, according to manufacturer's instructions. When it's just about done, mix in about a cup of the fluff and the chopped chocolate and graham crackers.

Put the ice cream it in airtight containers and freeze some more. I know; so much waiting. But it's all worth it! I have these containers (affiliate link) and absolutely love them. I have at least one filled with ice cream and in my freezer at all times.

You'll have to let the ice cream freeze a bit more once it's in the containers (I know... I'm sorry!). I usually like to have it in my freezer overnight, but it should be ready after about 6 hours (you can check after 4 if you're super impatient... I don't blame you!).

And then FINALLY you're ready to dig in. I promise the wait is totally worth it and this s'mores ice cream will not let you down.

It doesn't look like it based on the ingredients list, but once all the mix-ins are added and the ice cream expands while it's being mixed, this recipe makes about 2 quarts of ice cream. That's a half a gallon and should be enough to share with friends! If you're feeling generous.

There's no way you can't love this ice cream if you're a s'mores fan. It has all the elements of the classic campfire treat and plenty of them.

There's nothing worse than getting a pint of ice cream and having to dig around for all the good stuff. So many ice cream brands skimp on the good stuff! You won't have that problem with this recipe. Every scoop has chocolate, marshmallow, and graham cracker.

It's also my opinion that ice cream should be served with every dessert course in the summertime. And I have a feeling if you pull out a quart of this ice cream when making s'mores at a campfire, you'll be the most popular person there.

S'mores AND s'mores ice cream? It may sound like overkill to some, but summer is so fleeting, you may as well enjoy it to the fullest extent. I know I am.

And it's ALSO my opinion that s'mores are just about the only bright spot of a camping trip. And even that's questionable. Because I'm the one who always ends up with marshmallow in my hair and chocolate on my clothes.

I prefer the option to go home after and rinse off. Or you know, to just make s'mores in my kitchen. And eat this ice cream on my couch. Or MAYBE on my deck if the mosquitoes aren't too bad. I promise I'm not always high maintenance.

I hope you're not experiencing s'mores overload yet this summer because we still have lots of time left and plenty more s'mores treats to dig into.

How do you enjoy s'mores in the summer? 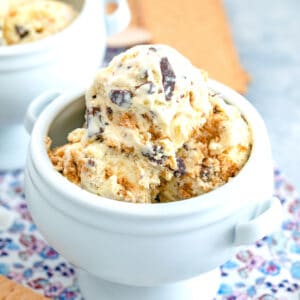