These Caramelized Brussels Sprouts with Pancetta, Pomegranate, and Feta make for the most festive holiday side dish... But they're also a simple-to-make vegetable side that can be enjoyed all winter long!

Happy Thanksgiving week!! How the heck is Thanksgiving here already? I mean, the holiday is super late this year and yet, I somehow can't believe how quickly it arrived. Not that I'm complaining... I just wish I had more time for Thanksgiving recipe experimentation!

But one of the good things about Thanksgiving foods is that they can all be enjoyed most any time of the year.

Do you serve brussels sprouts at your holiday meals? I know, I know... Brussels sprouts can be a bit of a polarizing vegetable; either absolutely loved or ridiculously despised by most people.

Personally, I'm a brussels sprouts lover, but I also totally understand why people may not like them. It's usually due to their bitterness or mushiness.

But guess what? Bitterness and mushiness simply mean the brussels sprouts weren't cooked well and that can be easily changed! And it all else fails? Add some fun accompaniments to brussels sprouts and I promise your Thanksgiving crowds will go wild.

You'll love this recipe because the brussels sprouts are cooked perfectly and are absolutely amazing! They're caramelized here, which means they're crispy and flavorful and so, so yummy.

Plus, there is plenty more to love besides caramelized brussels sprouts in this dish. Pancetta, pomegranate arils, feta, and toasted pistachios add a certain pizzazz that that will have even the biggest brussels sprouts hater taking a little "no thank you portion."

It's also quite easy to make and once your sprouts are caramelized, you just have to toss everything together on a platter and you're ready to serve.

What you see is basically what you get in this recipe and the ingredient list is pretty simple. Here's everything you need:

How to Caramelize Brussels Sprouts

Caramelizing brussels sprouts is easy! And since it brings out the sprouts natural sugars, it's a really delicious way to cook them. You can cook them in the oven, but I prefer to have more control over their doneness and cook them nice and quickly in a skillet.

I recommend blanching the brussels sprouts before sautéing them as blanching helps get rid of a little bit of the bitterness and also helps the sprouts keep their bright green color.

Here are the steps for getting the perfect caramelized brussels sprouts;

Blanch: Simply bring a large pot of salted water to a boil. Add the brussels sprouts and let them boil for about 4 minutes and then drain them and plunge them into a bowl of ice water (to stop cooking). Your sprouts won't be cooked all the way, but don't worry; we'll be taking care of that when we caramelize them.

Trim: the ends of blanched sprouts off (don't cut too far up for the leaves will fall off) and then cut in half lengthwise.

Caramelize: Turn heat under skillet to medium-high. There should be a thin layer of oil from the pancetta in the pan, but you can add more if necessary (or if you didn't cook your pancetta first).

Place half the brussels sprouts cut-side down into the skillet and sprinkle with half the salt and half the pepper.

Let sprouts cook for 4-5 minutes until they're turning nice and golden. Turn sprouts over and let cook for another 3 minutes.

And that's it! Your brussels sprouts have been deliciously caramelized.

How to Make Caramelized Brussels Sprouts with Pancetta, Pomegranate, and Feta

While the brussels sprouts are blanching, you can start cooking your pancetta in a large skillet (I like to use cast iron). Just cook it until it's crispy. Once crispy, remove pancetta to a paper towel-lined plate and leave the oil in the pan.

Now, layer all the ingredients on a platter. I started with the caramelized brussels sprouts and then sprinkled on the pancetta, pomegranate arils, crumbled feta cheese, and toasted pistachios.

I drizzled on a little olive oil and honey, too. There are so many fabulous flavors here that you don't have to add on a fancy dressing or do anything too crazy.

And omg the flavors. First of all, the caramelized brussels sprouts are obviously the star of the show. They're crispy (not mushy!) and full of sweetness from the caramelization. I almosttttt want to say they're like candy, but I won't go quite that far. But still, they're absolutely delicious.

Plus, the sweetness of the pomegranate and salty bite from the pancetta and feta round out the dish so well. I also added the toasted pistachios for just a little bit of crunch.

I personally love this combination together, but there are so many different ingredients you could utilize that also go fabulously with caramelized brussels sprouts. Here are a few substitutions and/or additions I think would work really well:

I especially love this side dish for the holiday table because of its gorgeous colors. It makes for a wonderful Thanksgiving vegetable, but is also such a fun Christmas side dish thanks to the vibrant red and green colors.

If you're looking for some new dishes to make for your holiday dinners this year, I have plenty of ideas for you! Here are some of my favorites:

Of course, brussels sprouts are in style all winter long, so there's really no bad time for caramelized brussels sprouts with pancetta. They're easy to make and you can always switch up the other toppings if you want.

Or simply serve the sprouts in a bowl and eat them like candy.

Too far? I'm not saying they'll replace your pumpkin pie or anything like that. But they are so sweet and delicious and feel like a little vegetable treat.

So, have I convinced you to add brussels sprouts to your holiday dinner table? If you're still a sprout skeptic, I urge you to get caramelizing and adding on some crowd pleasing accompaniments!

Do you serve brussels sprouts at holiday dinners? 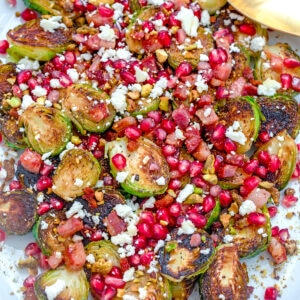 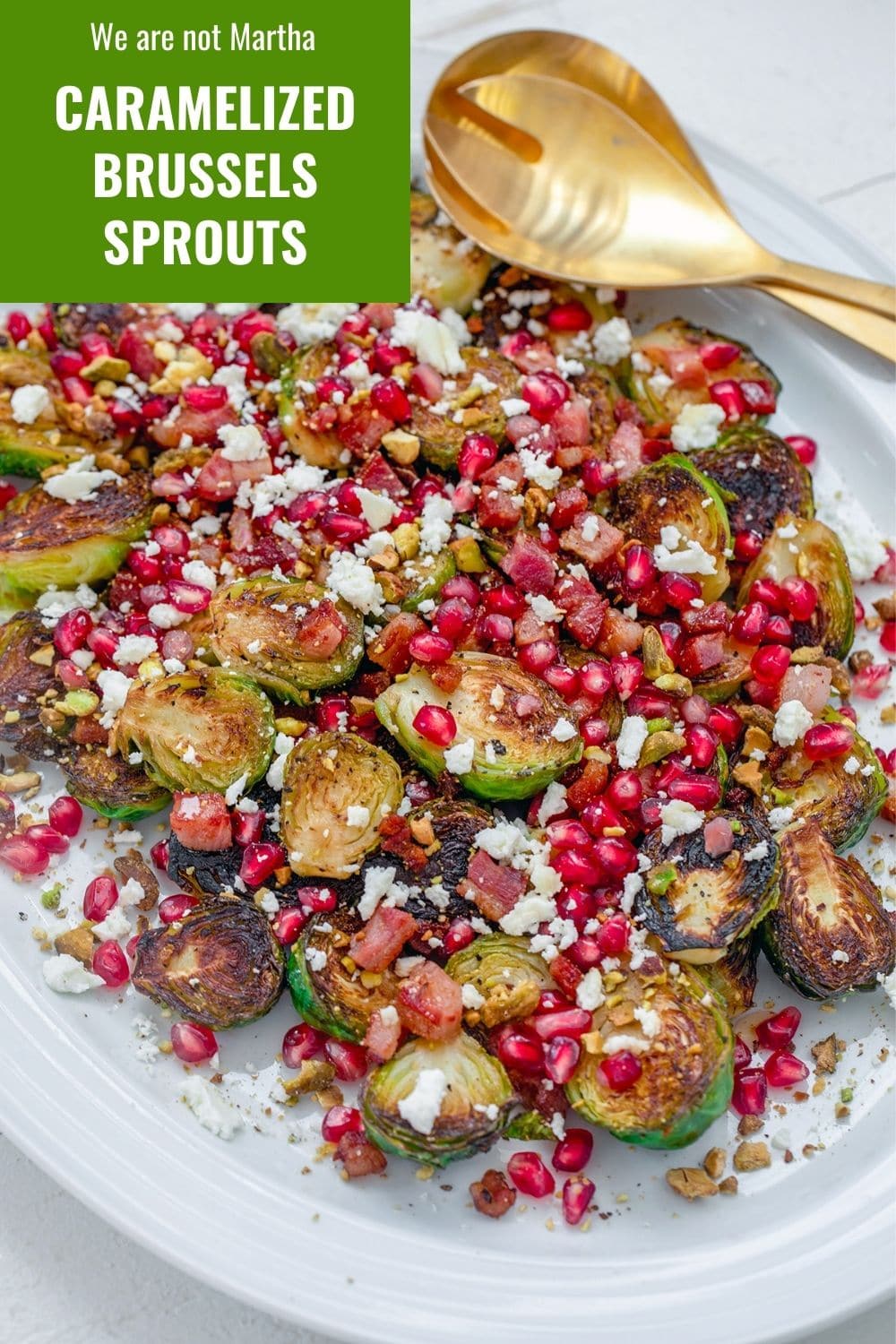