If you're a fan of the classic cinnamon sugar cereal, you're going to love this Cinnamon Toast Crunch Cocktail! It combines cereal milk with bourbon and a sweetener for the perfect after dinner or brunch drink. It's like drinking the milk at the bottom of the cereal bowl... But with a kick!

I've been dreaming of a Cinnamon Toast Crunch cocktail for a long time. But not like the other ones I've seen on the internet.

But. I wanted to make a Cinnamon Toast Crunch cocktail that actually utilizes the cereal in the drink.

The result is a bourbon and cereal milk-based drink that's packed with sweet cinnamon sugar flavor. I'm in love!

Since I was using cereal milk in my cocktail, I decided Bourbon would be the liquor that would match best (think milk punch!). The full ingredient list includes:

How to Make Cereal Milk

This is pretty self-explanatory, but making cereal milk is essential for this cocktail recipe!

All you have to do is pour yourself a bowl of cereal... And then not eat it!

Let the cereal sit in the milk for about an hour so the flavors can really infuse.

Then, strain the cereal out of the milk.

And just like that you have a batch of homemade cereal milk that can be used for all kinds of things... But is especially delicious in cocktail form.

How to Rim Cocktail Glass

While the cereal is infusing into the milk, you can use the time to prep your cocktail glasses.

You can use any type of glass you want, but I use 5.5 oz. coupe glasses for this drink. It fits perfectly!

I like to rim them with crushed Cinnamon Toast Crunch, which is so easy to do. I usually put the cereal in a Ziplock bag and crush it with a meat mallet.

But you can whack it with anything you want and could also pulse it in a food processor.

Put the cereal on a plate.

And brush the rims of your cocktail glasses with an adhesive. I always have simple syrup in my fridge, so generally use that (it's super sticky, clear, and nice and sweet!).

If you're making your own simple syrup, you can use this recipe. Or you can even purchase a bottle of it to keep on hand (it has SO many uses!).

But you can also use agave, honey, or maple syrup. You'll need one of those for the cocktail anyway, so just brush your glass with whichever you're using!

I like to use a pastry brush to get the liquid on the rim.

Now, just turn your glass upside-down and roll the rim on the plate of cereal.

How to Make a Cinnamon Toast Crunch Cocktail

Now that your cereal milk is ready and your cocktail glasses are rimmed with cereal, you're ready to shake up the cocktail!

Shake well and pour into prepared glass and sprinkle with a little ground cinnamon for garnish.

This recipe makes 2 cocktails, so you can repeat with the rest of the ingredients for the second cocktail.

I'm in love! This tastes just like drinking the cereal milk at the bottom of the bowl... But with the most perfect kick of bourbon, too.

I would never encourage drinking at breakfast, but at brunch? That's a whole different story!

And this Cinnamon Toast Crunch cocktail would be the perfect pair to these pancakes.

If you don't have it or you're not a fan of bourbon, this would also likely be tasty with any whiskey or even rum,

If you don't care about using actual cereal in your drink and just want a cocktail that tastes like Cinnamon Toast Crunch, you can make a drink with RumChata, Fireball, and vanilla vodka for a similar taste!

But I think nothing compares to the cereal-infused milk.

If you've been reading here for a while, you know I'm big on baking and cocktail-ing with cereal (seriously, I have A LOT of cereal recipes) and Cinnamon Toast Crunch is one of my favorites to experiment with in the kitchen.

Here are some of my favorite recipes using Cinnamon Toast Crunch:

When it comes to favorite cereals, it's a constant battle between CTC and Lucky Charms for me. And both are so fun to bake (and cocktail) with! Fruity Pebbles is a close third.

But they're also fun as an after-dinner drink when you're craving something a little sweet and want to wind down with a bit of bourbon.

No matter when you enjoy them, these cereal cocktails will calm a craving you may not have even realized you had!

What cereal would be in your dream cocktail? 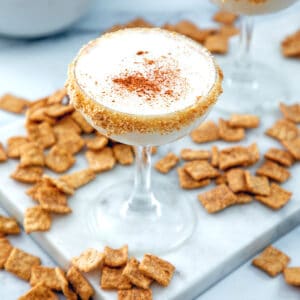 If you're a fan of the classic cinnamon sugar cereal, you're going to love this Cinnamon Toast Crunch Cocktail! It combines cereal milk with bourbon and a sweetener for the perfect after dinner or brunch drink. It's like drinking the milk at the bottom of the cereal bowl... But with a kick!
5 from 2 votes
Print Pin Rate
Course: Drinks
Cuisine: American
Keyword: Cereal Recipes, Cinnamon Toast Crunch Recipes
Prep Time: 10 minutes
Cereal Milk Infusing: 1 hour
Total Time: 10 minutes
Makes: 2 cocktails
Author: Sues 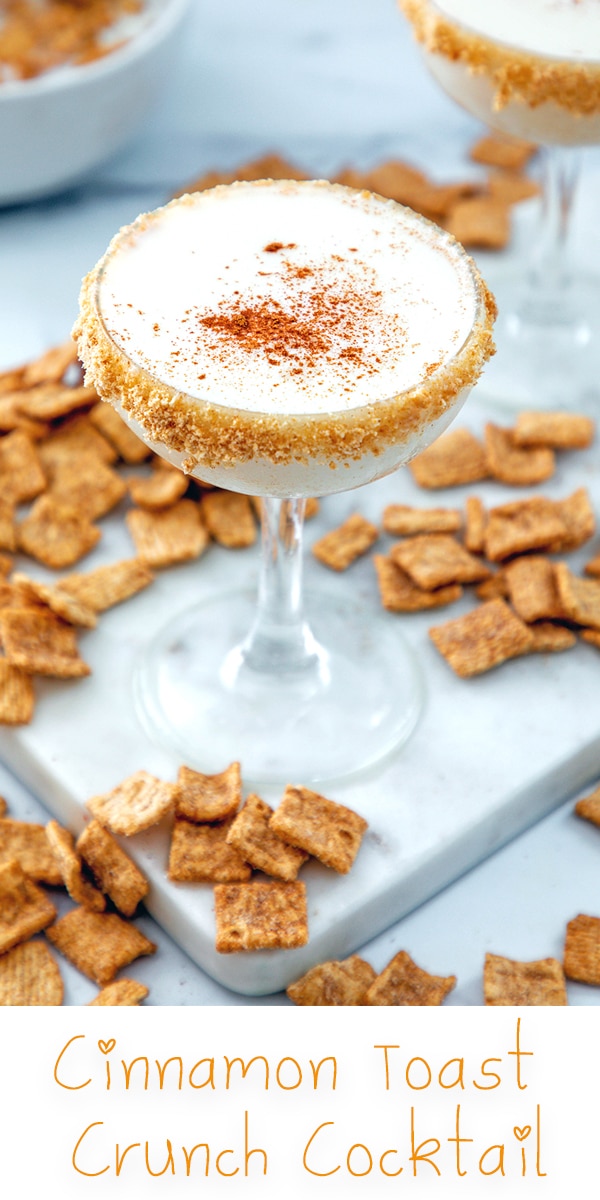