These Spiked Eggnog Doughnuts are packed with festive eggnog flavor and just a touch of rum (you can leave out the rum if you want). The incredibly moist baked doughnuts are perfect for the holiday season!

(This recipe for Spiked Eggnog Doughnuts was originally posted in November 2012, but has been updated with new photos and content in 2019).

I used to believe eggnog was one of those things you either love or hate. But now I'm not so sure that's true.

I think there are plenty of eggnog "in-betweeners" out there. People who love the flavor and festivity of eggnog, but can't stand the consistency. Because it's hard not to love the sweet nutmeg-y flavor. But I get not wanting to large chug a glass of thick, creamy eggnog.

Solution? Instead of drinking it, use eggnog as an ingredient in your baked goods!

When it comes to actually drinking eggnog, I'd say I'm somewhere in the middle of being an eggnog in-betweener and an eggnog lover. I absolutely LOVE the flavor, but only enjoy drinking it in small doses at the appropriate time of year.

Chris, however, is a hardcore eggnog lover. Like I've never known someone who can drink so much of the stuff. He's been asking for it since October, but I really can't bring myself to buy it until November (though I saw it in stores in freaking September!).

When it comes to baking with it, though, I always love eggnog. I even like the flavor in more questionable things, like tea (Bigelow's eggnog tea is a true holiday joy) and even seltzer water (seriously upset Polar Seltzer no longer makes their eggnog seltzer because it had all the flavor of eggnog with none of the thickness).

I also will never turn down a mug of spiked eggnog during the holiday season.

And now I won't turn down a spiked eggnog doughnut either. Nor should you.

These spiked eggnog doughnuts have all the flavor of eggnog without all the thickness and… well, they do have the calories. But that's OK because they're totally worth it. I promise.

They also have rum. In both the doughnuts and the icing. Because I would never let you down like that. It's not a super prominent flavor, but you can tell it's there.

However, if you want to make these for the kids or someone who doesn't like the taste of rum (the alcohol does burn off in the oven, but I get if you don't want to feed your kids "spiked" baked goods), just substitute the rum with a little more eggnog instead.

These doughnuts are baked and super easy to make. Fried doughnuts can definitely be a bit of a project, but baked doughnuts can be made in no time at all. All you have to do is make a batter.... and you don't even need a mixer for this one!

They're SO easy and festive and perfect for the holiday season.

Aside from the eggnog, these donuts contain pretty typical ingredients for baked donuts. Here's everything you need:

Of course, you can't make these donuts without the delicious eggnog icing! Here's what you need for that:

How to Make Spiked Eggnog Doughnuts

The process for making these eggnog donuts is easy... All you need is a couple of mixing bowls and a donut tin!

To start, whisk together the flour, sugar, baking powder, cinnamon, nutmeg, and salt in a large bowl.

In a separate small bowl, whisk the eggs. Then add in and whisk together eggnog, rum, and melted butter, until combined.

Stir the wet ingredients into the dry ingredients, being very careful not to over-mix (that's what causes the dense cake-y doughnuts).

Spray your doughnut pan with some cooking spray and then fill the doughnut pan about ¾ of the way with batter.

An easy tip for filling your doughnut pan? Put the batter in a Ziplock bag (or a pastry bag) and cut the edge. Squeeze batter into pan. It's so much easier than spooning it in!

If you're in the market for a good donut pan, I highly recommend this one from Wilton (affiliate link... this listing comes with 2 6-cavity pans!).

Bake donuts for about 10-12 minutes at 325 degrees. Doughnuts should be nice and springy to the touch when they're done.

Let the eggnog donuts cool in the pan for a few minutes and then remove to racks to cool completely. Re-spray the pan and pop the next batch in the oven (if your doughnut pan only holds 6 doughnuts like mine!).

While the doughnuts are baking and cooling, you can make the icing! It's easy.

How to Make Eggnog Icing

Simply whisk together the confectioners' sugar, butter, rum, salt, and 4 Tbsp eggnog. If your icing is too thick, you can add more eggnog… OR rum.

Whatever floats your boat.

Once the eggnog doughnuts are completely cooled, top with frosting. And some pretty sprinkles if you so desire.

I like to double dunk my doughnuts in the icing. I dunk them all and then go back and dunk them again.

I know it's not quiiiite Thanksgiving yet, but I think I can say welcome to the holiday season. The weather in Boston has certainly been preparing us the last couple weeks. Brrrr.

A glass of eggnog straight from the fridge might not warm you up, but I'm pretty sure a spiked eggnog doughnut would.

These are most definitely the BEST baked doughnuts I've ever made. Of course, they don't taste like traditional fried doughnuts, but I feel like fried AND eggnog would have been a bit too much. Even for me.

So, I liked that these are more like cake doughnuts. But eggnog helps make them super moist, so they aren't too cake-y and certainly aren't dense.

What Kind of Rum to Use

You can really use whatever you prefer or have on hand. Dark rum is more traditionally used in baking and with eggnog, but I actually used light rum for these doughnuts since it's what I had on my bartop.

Can I Make These Without Rum?

Yes! I can tell you that the rum flavor isn't super prominent and the alcohol burns off when baking, but if you want to make these for the kids or don't have a bottle of rum and don't want to purchase it, you can just substitute the rum with a little more eggnog.

Do the same with the icing.

They will still be absolutely delicious!

There's really nothing about these spiked eggnog doughnuts that won't make you happy. Or launch you into the holiday mood.

And let's face it; eggnog is pretty harmless in November when you consider I could be decking the halls with candy canes and Christmas trees. Don't worry; that's coming soon. You ain't seen nothing yet!

Oh, but we can't forget about the icing. Oh my God, the icing. It's sweet for sure, but also tastes distinctly like eggnog. With just an itty bitty teeny weeny touch of rum.

Because if that doesn't get you into the holiday spirit, I don't know what will.

If you're looking for more ways to incorporate eggnog into your recipes, me and my eggnog obsession have got you covered! Here are some of my favorites:

I'm also pretty excited for holiday drinks this year. And I'm sure I'll be spiking up some eggnog and whipping up some creamy cocktails to welcome holiday decorations, snow, and Christmas carols.

But first, we'll be celebrating Thanksgiving in just a week (!!!). It's my all-time favorite holiday and I plan on enjoying it to the fullest extent.

But still, all eggnog concoctions, including these eggnog donuts, are fully welcome at my Thanksgiving celebration.

Are you an eggnog lover, hater, or in-betweener? 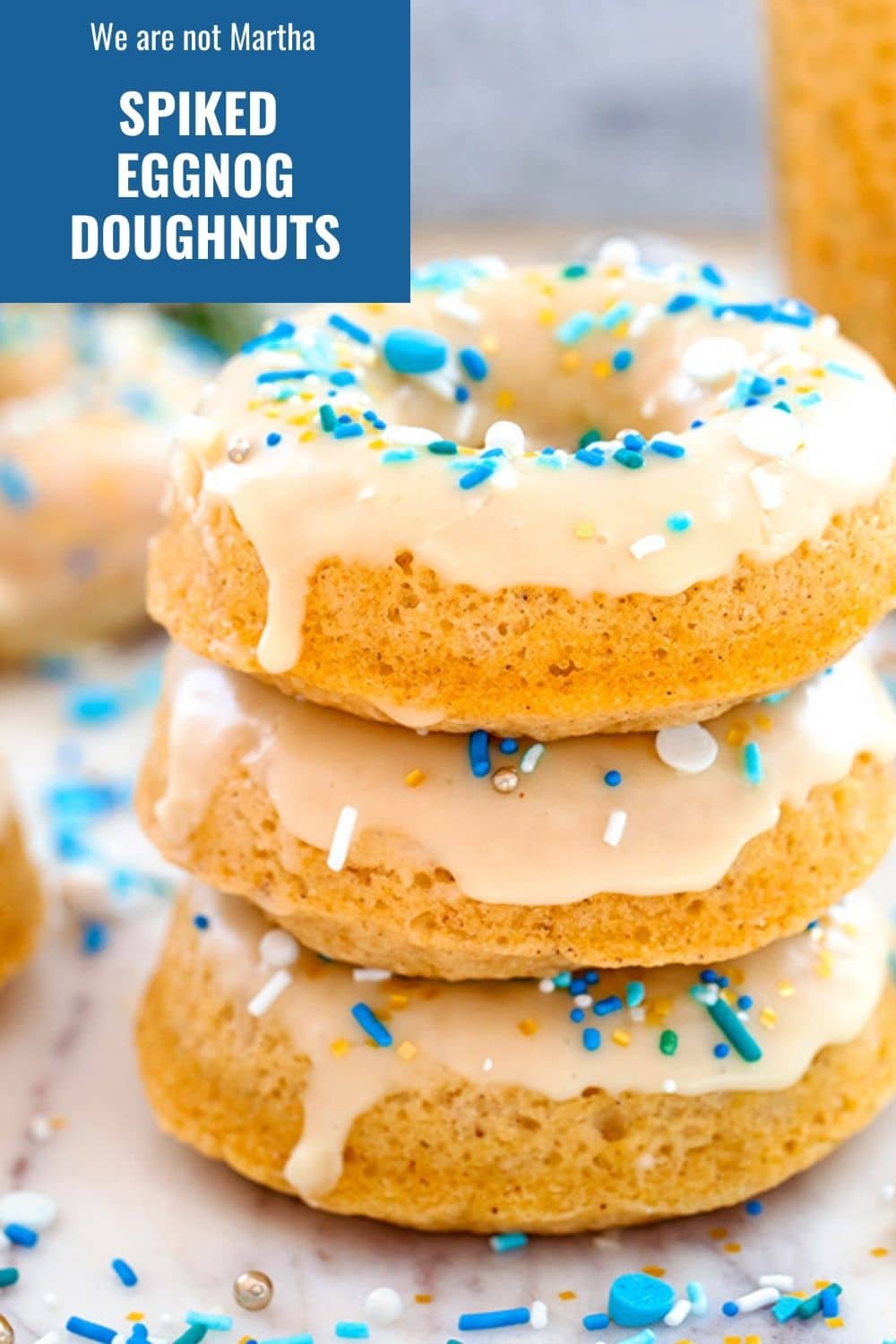