They may be all the rage right now, but with quinoa,  jalapeño and parmesan cheese, these quinoa tater tots are way more fun and flavorful than the average tot! 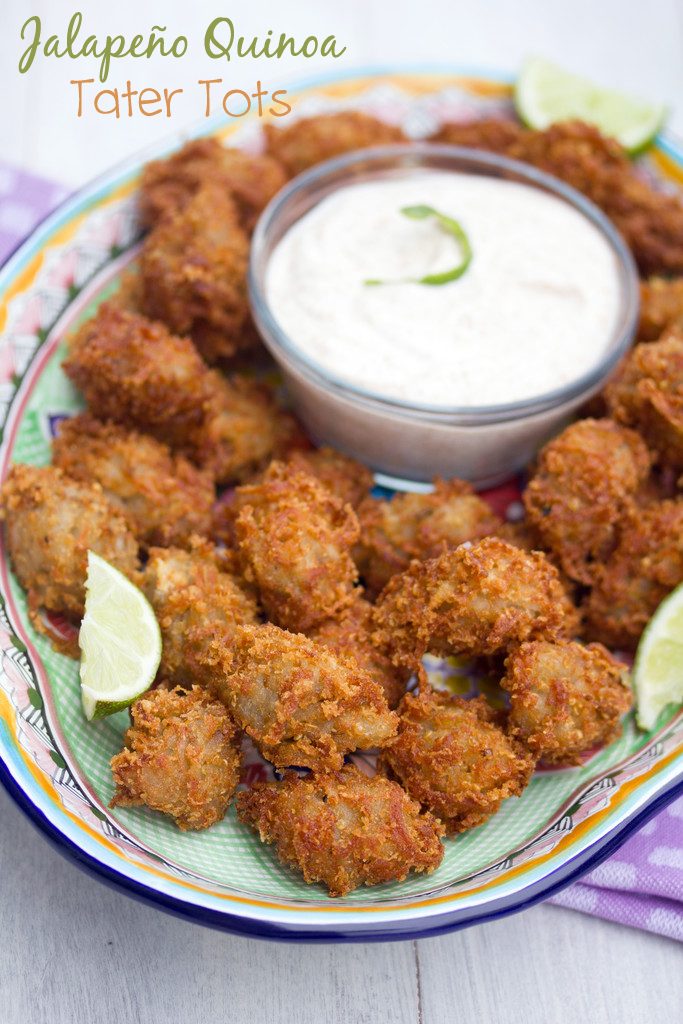 The other day I tried to figure out what cooking skill I perfected the most in 2014. And I’m not sure if I should be proud to say it or not, but it was totally frying. From doughnuts to fritters to chicken, I spent a decent amount of time waiting for pots full of oil to hit the right temperature. I also set off the smoke detectors a time or two (or 34). And learned that there’s literally no way to turn them off in our house. And they’re obnoxiously loud. And say things in a creepy voice, like “smoke in the kitchen. Evacuate now!” Except you can’t really hear the voice because the alarm noise is so freaking loud. I also set them off when blowing out candles sometimes. Which is always a nice way to fully wake up again when you’re getting ready to go to bed.

But back to the frying. I’ve historically had a tough time frying because I’ve been really bad at getting the oil to the proper temperature and then understanding how to keep it there. But I fried so much in 2014 that I actually got pretty good at it. So good that this new recipe, my first frying recipe of 2015, was a breeze. Which is going to make for a very dangerous year. You’ve been warned.

I know tater tots are like a major food trend right now. Which is probably why I started craving them. But every time I order them out, they’re a major flavorless disappointment. Which is why I decided to make my own. I added lots of flavor in the form of parmesan cheese and jalapeños. I also has the grand idea of making the tots quinoa tater tots because I thought the addition of quinoa would do a nice job of bulking them up and um, adding a little protein. Because that’s obviously what you’re thinking about when eating tater tots. Whatever. It worked for me. 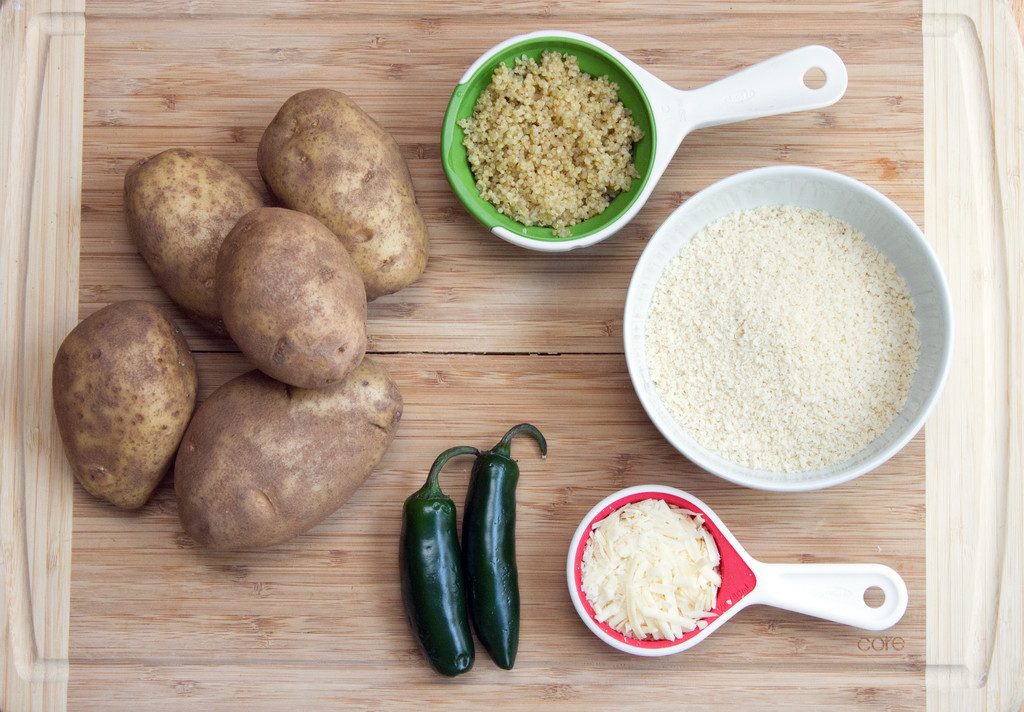 These are actually super easy to make so long as you’re not afraid of bringing a little oil up to 350 degrees. Which you’re not, right??

First, you’ll want to bake the potatoes a bit to soften them. I baked them for 25 minutes at 375 degrees so they were tender, but still a little hard in the middle.

Once out of the oven and cool enough to touch, you’ll peel them (the skin should slide right off!) and then use a box grader to shred them into a bowl.

This was the best arm workout I’ve had all year. Cooking is exercise! 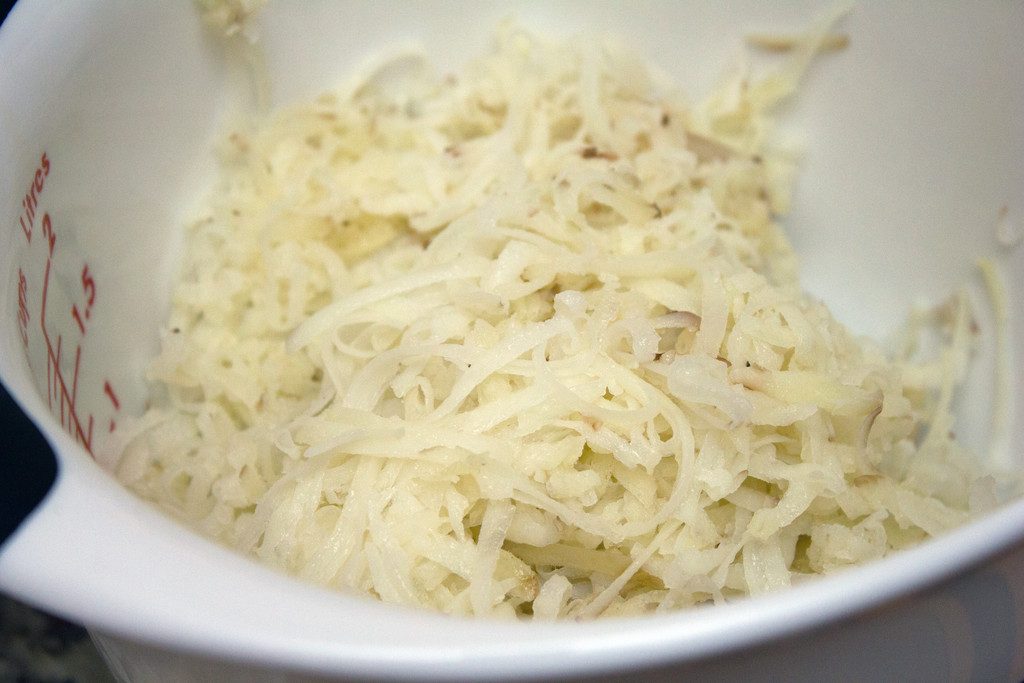 I mixed the jalapeño, quinoa, parmesan cheese, and salt and pepper in with the grated potatoes.

And then formed the potato mixture into little cylinders that I placed on a foil-lined baking sheet.

I got a late start on these, so I popped them in the fridge overnight… I recommend doing so for at least an hour. 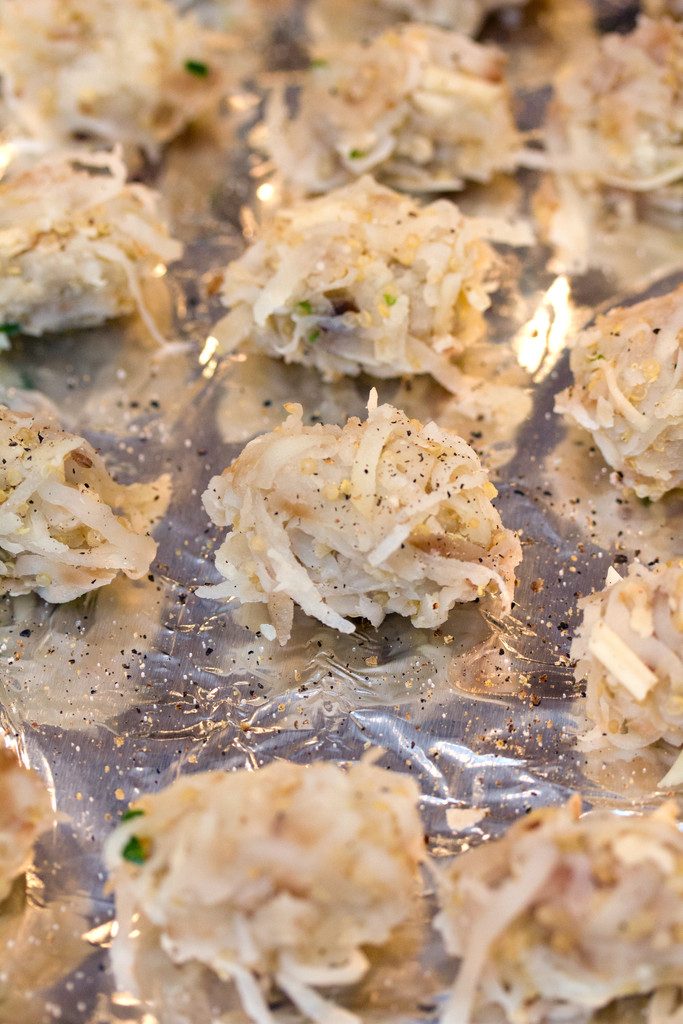 Before you’re ready to fry, put the panko in a bowl and roll the potato cylinders around in it to fully coat. 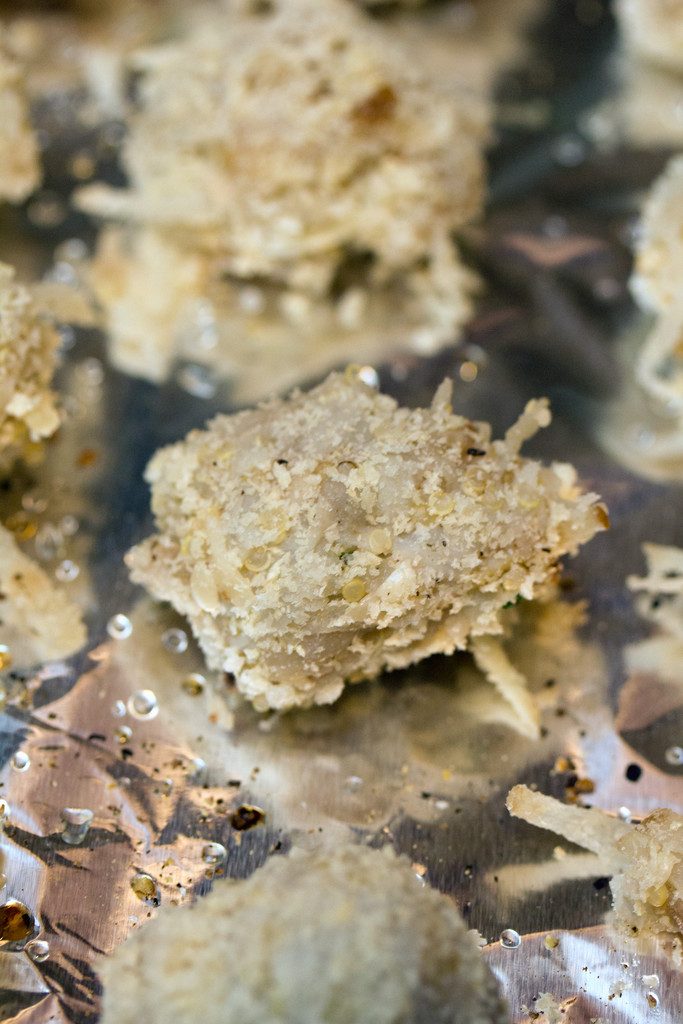 Here comes the frying! Bring about two inches of oil up to between 350-375 degrees. And then whatever you do, try to keep the oil within that range the whole time you’re frying. 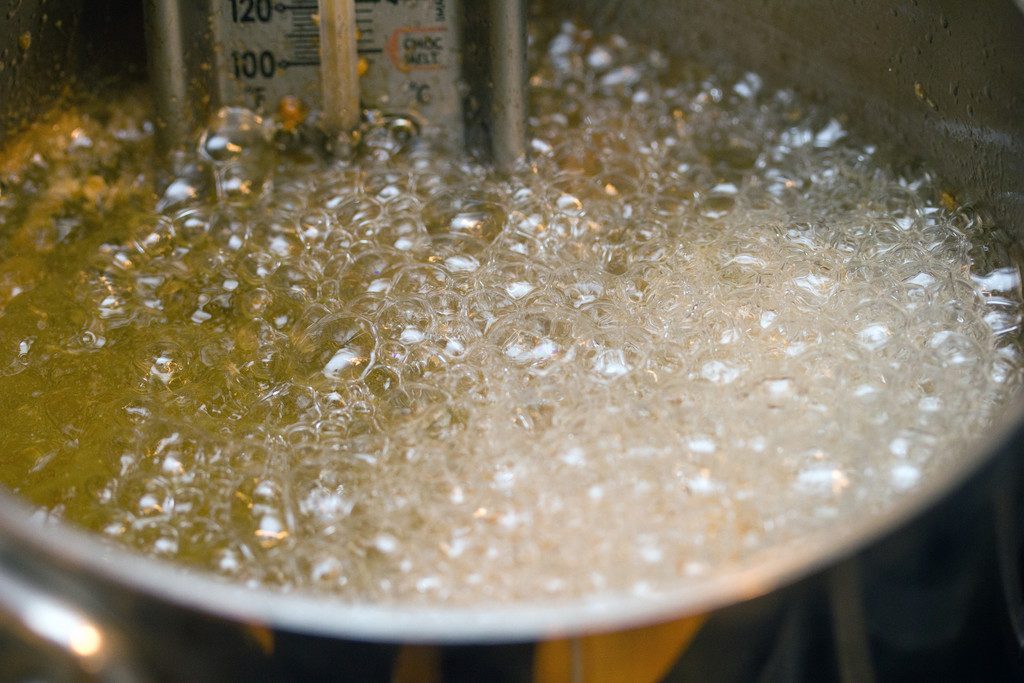 And fry the quinoa tater tots in batches, keeping them in the oil for about 3-4 minutes, until they’re golden brown. With a slotted spoon, move them to a paper towel-lined plate. 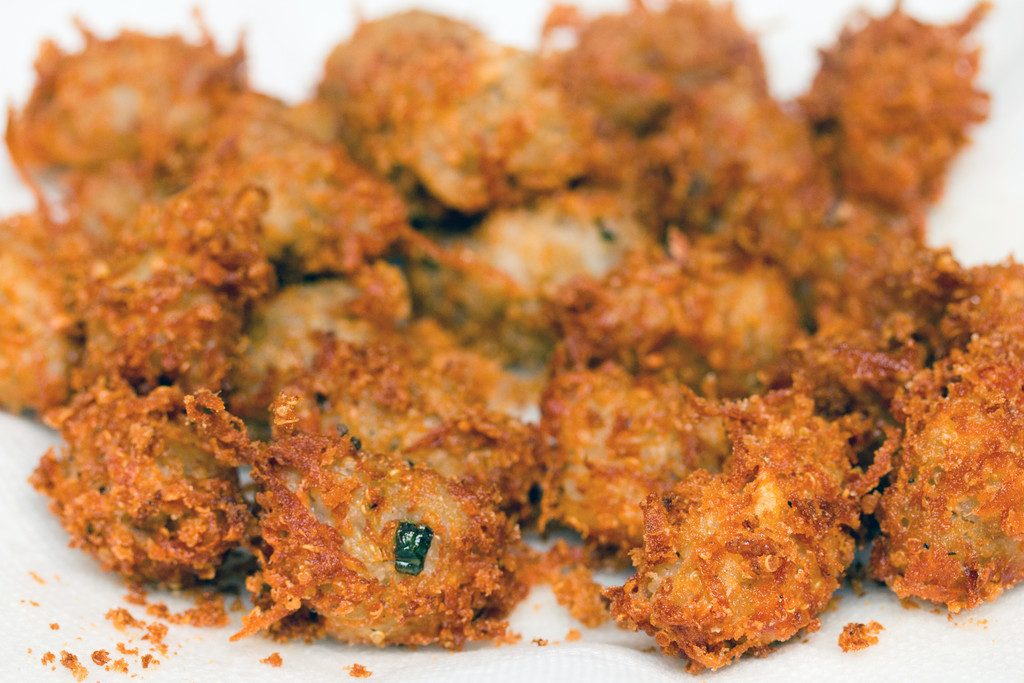 Keep going until they’re all fried up. 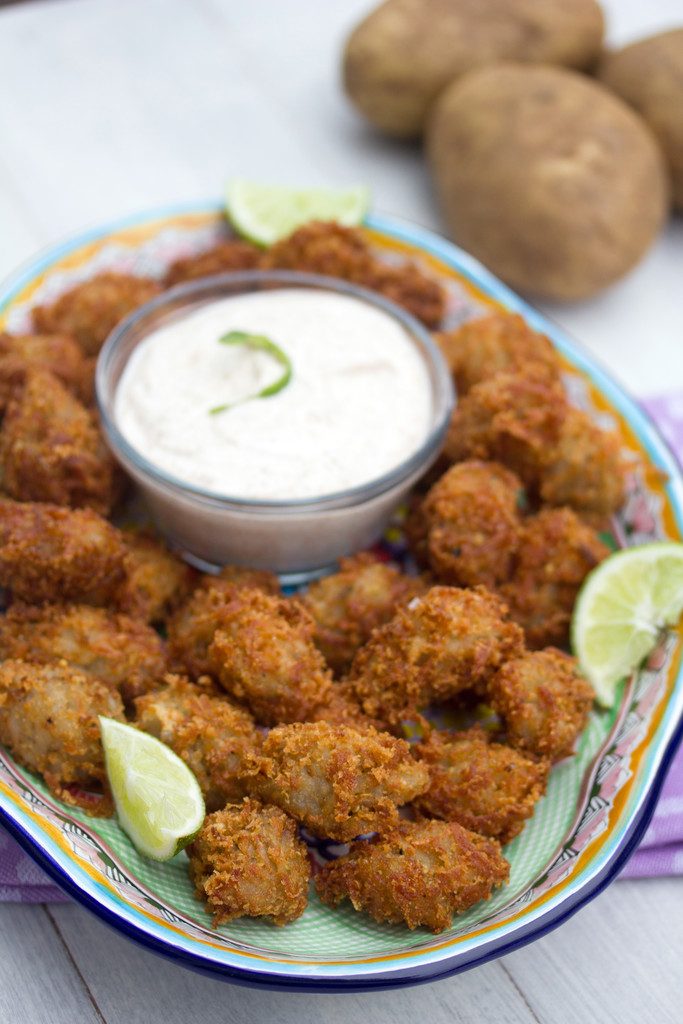 These quinoa tater tots are best served hot. With a deliciously simple dipping sauce if you can. Mine involved Greek yogurt, lime juice, and cumin.

It complemented the tater tots perfectly and was light enough that the flavor of the tots could shine through. “Flavor of the tots…” Wow, I’m really analyzing this, huh? It's worth it. 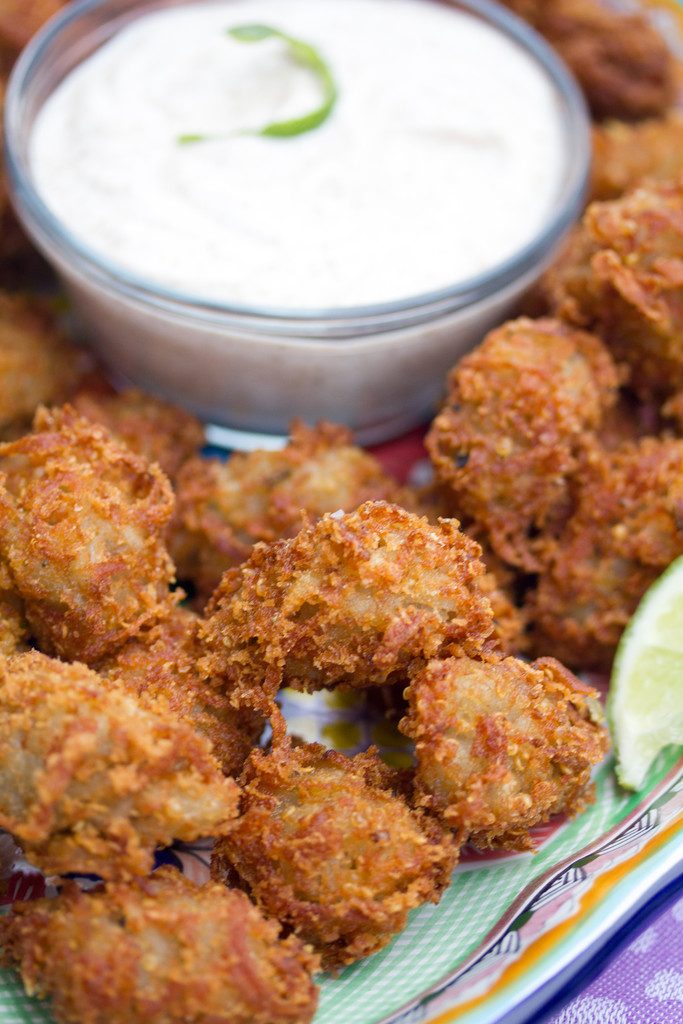 It’s being said that tater tots are going to be one of the next big food trends. And I’m excited about this only because I expect to see lots of fun flavor variations. Do you think quinoa tater tots could eventually become trendier than the regular old tot? 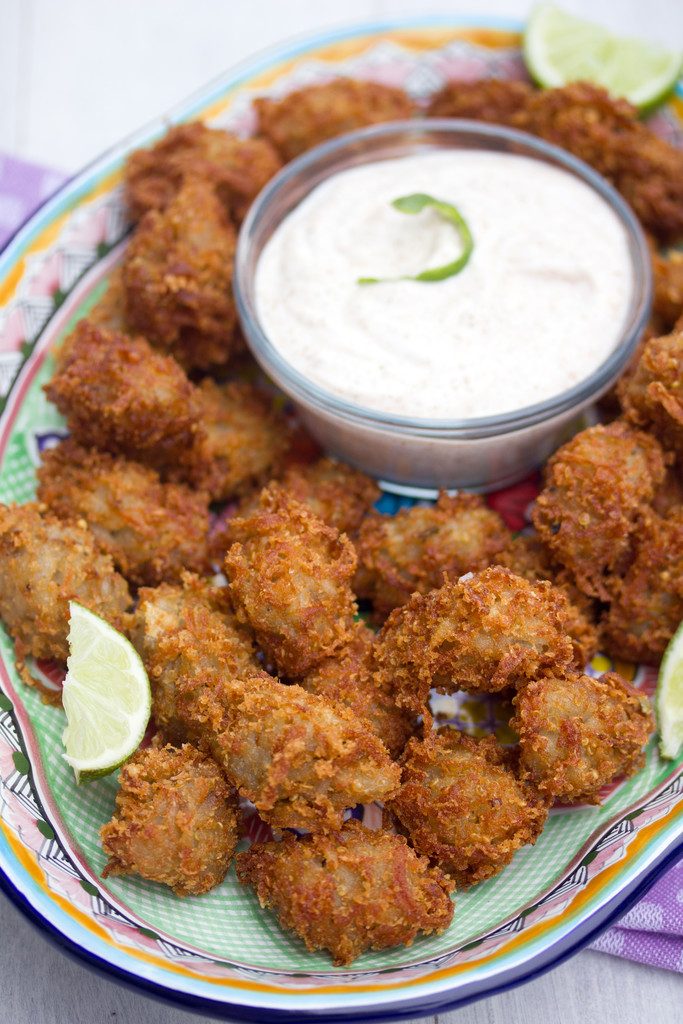 After enjoying these ones, I kinda sorta think regular tater tots are super boring… Unless they’re drowning in ketchup. Which will also be the name of my someday band… Drowning in Ketchup. Except I have no musical talent whatsoever.

And I mean, can we talk about what a good snack quinoa tater tots would be for the Super Bowl? 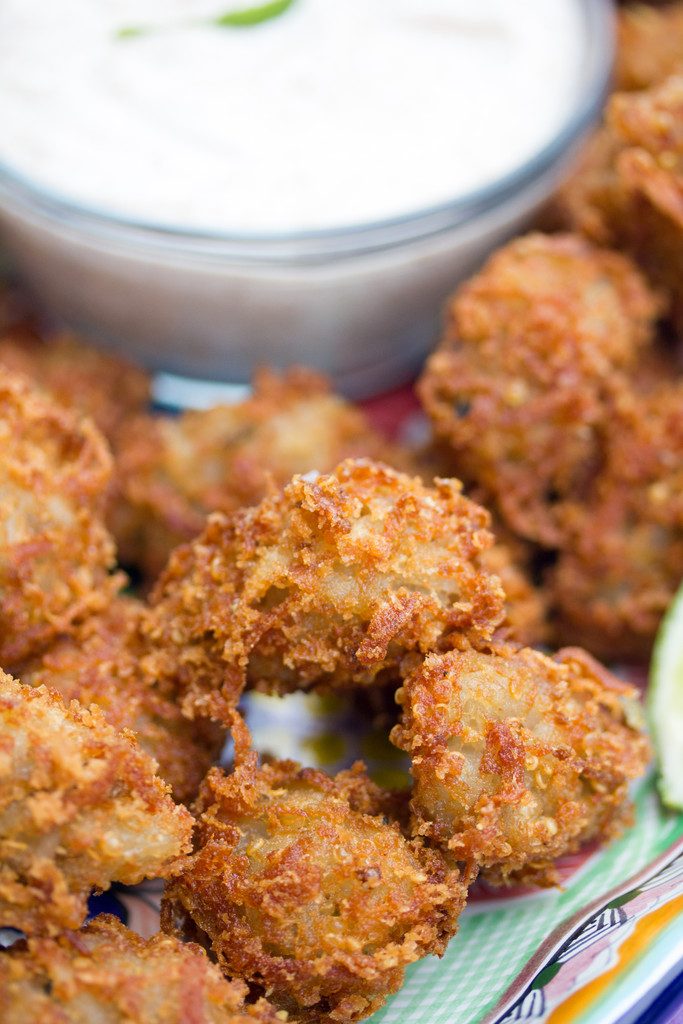 I ate way too many of these. Though they’re obviously fried, they’re not at all heavy. Just crispy. I’m not trying to tell you they’re healthy, but you do know that when you fry food at the proper temperature, not a lot of the oil actually gets trapped in the food, right? That’s just one reason why it pays to become a frying pro. Totally appropriate for a 2015 resolution. 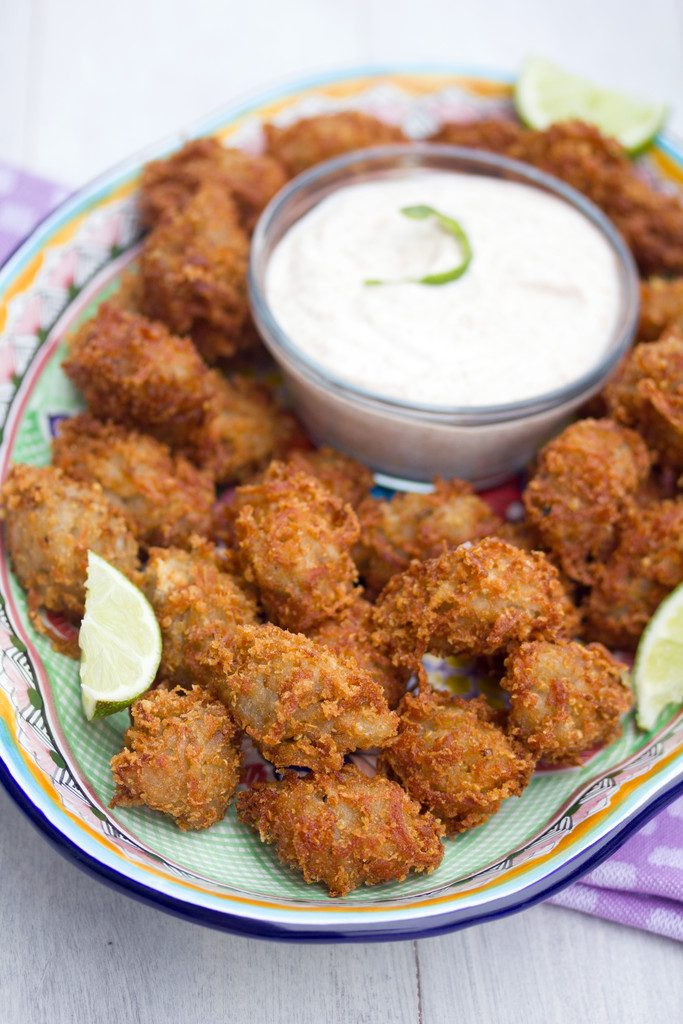 Also, it's not too late to make resolutions like these. You'll thank yourself in January, 2016. I think? Or maybe you'll just be really angry at me. 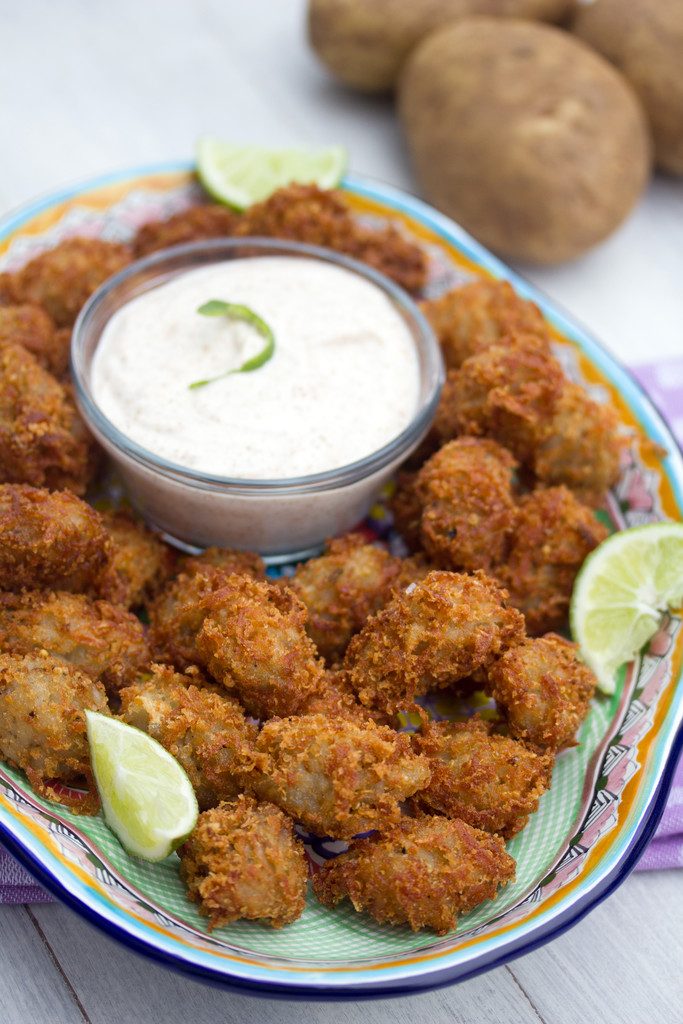 Something tells me I’ll be getting a lot more practice in 2015. I can think of about 50 billion more tater tot recipes I want to make. Which means I need to start putting my Fitbit into more action.... those 10,00 steps/day aren't quite going to do it anymore.

But for quinoa tater tots? I'd walk 10 miles. So worth it.

Will you be jumping on the tater tot trend of do you think it will disappear very quickly? 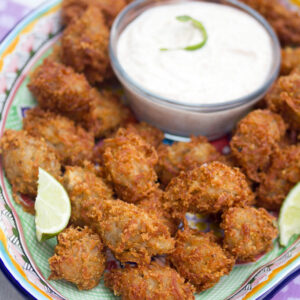 They may be all the rage right now, but with jalapeño, quinoa, and parmesan cheese, these tater tots are way more fun and flavorful than the average tot!
No ratings yet
Print Pin Rate
Course: Appetizer
Author: We are not Martha