Lobster is delicious right out of the shell, but this Lobster Artichoke Flatbread will make you realize that lobster is amazing on pizza, too! 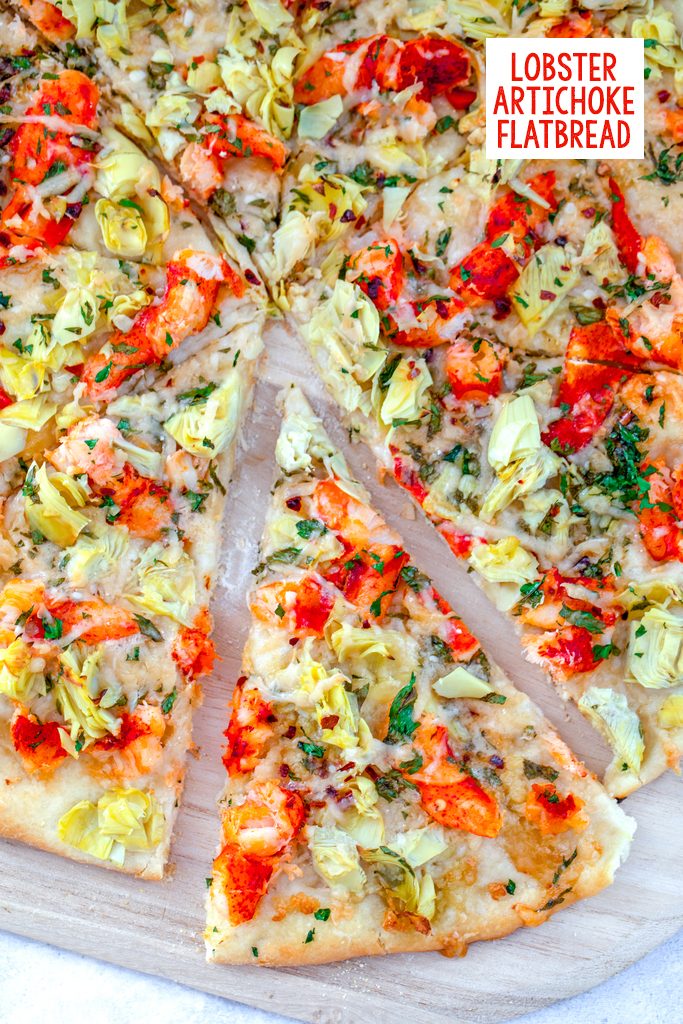 (This recipe for Lobster Flatbread Pizza was originally published in September 2012, but has been updated with new photos and content in 2019).

Seeing that I'm from New England and love lobster, it's a shame I don't have more lobster recipes on my website. But the thing is, when I eat lobster (and I eat it A LOT in the summer), it's usually nothing fancy and is consumed in one of two ways: 1) right out of the shell with a little butter, a side salad, and some garlic bread or 2) in a lobster roll with some potato chips and pickle slices. And you probably don't need my recipes for either of those methods of preparation (though I am working on a fun lobster roll twist recipe that I'll hopefully have ready soon!).

The thing is, lobster really is best in its purest form. And while I'll never turn down any dish involving lobster, lobster mac and cheeses and risottos and other dishes like that tend to mask the deliciousness of the lobster and just leave me wanting more in the end. However, sometimes it's fun to experiment fun new ways to eat your favorite foods. And considering there's not much that's bad on pizza, I figured a lobster flatbread would probably be pretty good. The key to making a great lobster pizza? Keep the ingredients simple, don't smother it in cheese, and let the lobster shine!

True to my philosophy, this flatbread doesn't involve too many ingredients and the lobster meat is the shining star. Plus, because I kept things simple, this lobster pizza can be on your table in no time at all! This is especially true if you purchase your lobster meat already out of the shell. Lobster meat can be super expensive, but every now and then my grocery store will have it on sale and I always buy it when it is. Even if I'm not planning on cooking with it right away, it freezes beautifully. And there's something that feels so wonderful about having a freezer stocked with lobster meat! Of course, you can also boil lobster and shell it yourself to get the meat (most grocery stores and fish markets will also steam the lobster for you if you ask).

Hello, pretty lobster. Get out of my dreams and onto my pizza and into my oven. 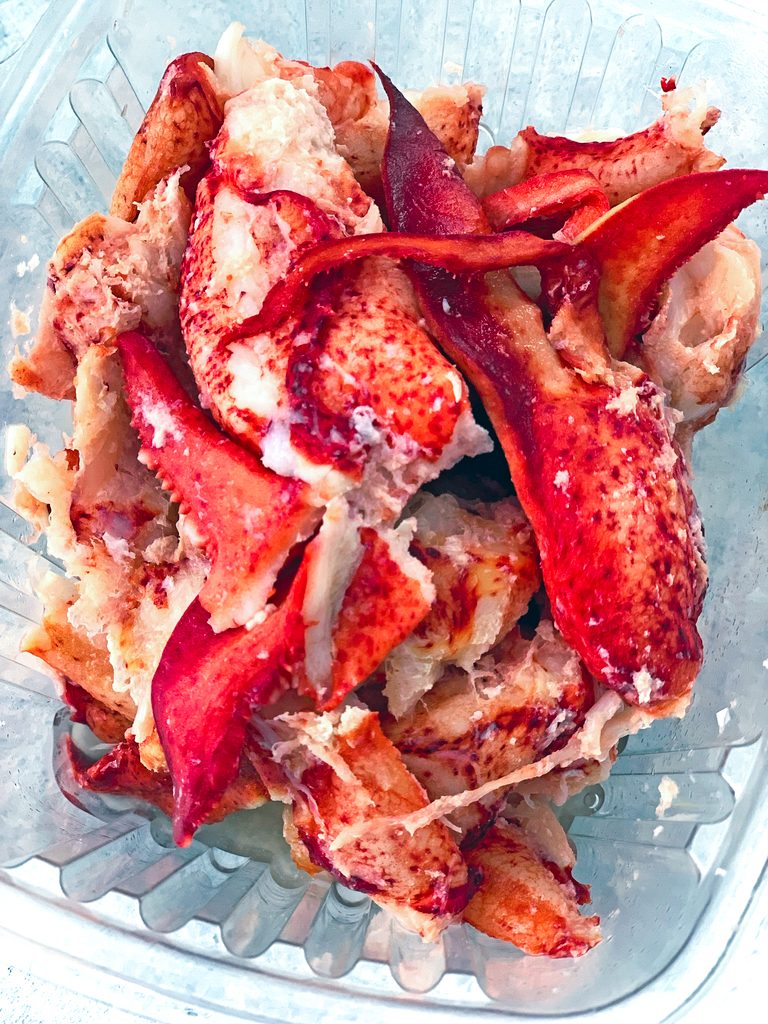 Start by pre-heating the oven to 450 degrees and covering a pizza pan with foil. I like to sprinkle a little cornmeal or flour onto my pan to prevent the pizza from sticking. Then roll half the flatbread dough out (if you're using my dough recipe. If you're using store-bought dough, roll the whole thing out) into a large circle and placing it on a foil-covered pizza pan.

In a small bowl, combine olive oil and minced garlic and using a pastry brush, brush lightly over the dough. 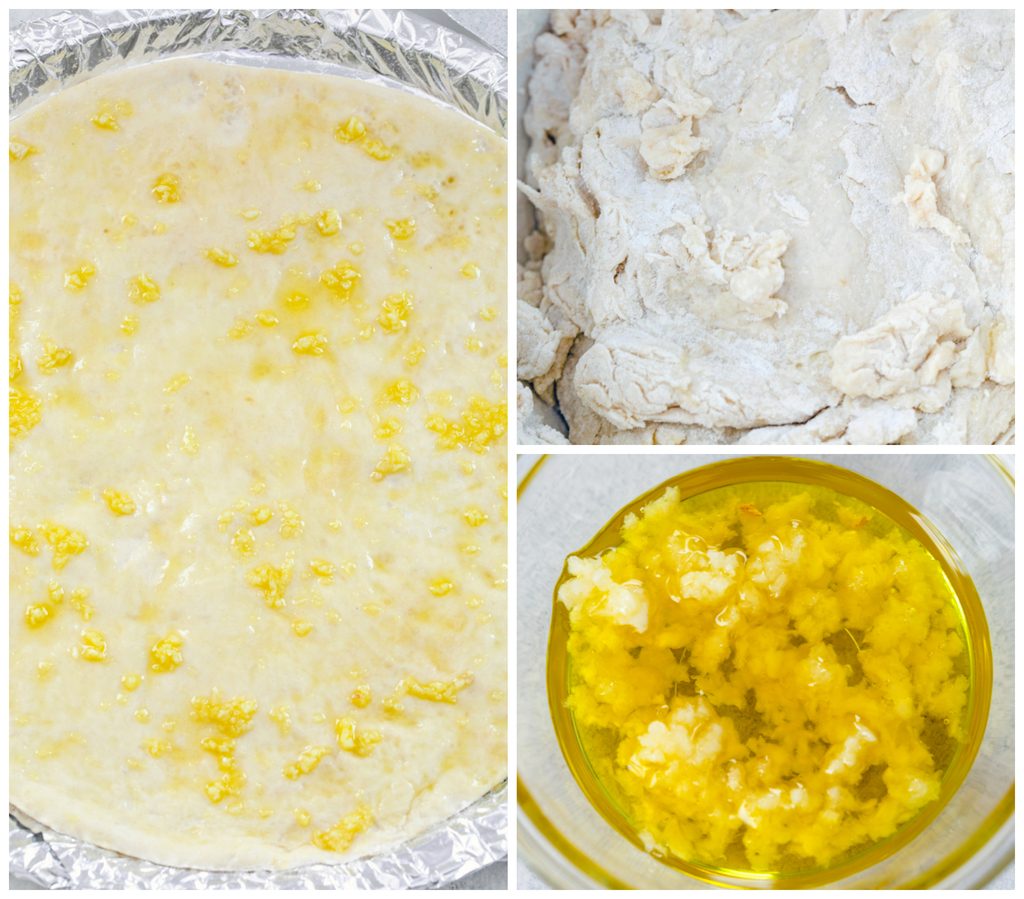 Then spread almost all the parmesan cheese on top and generously layer on the lobster and artichokes. Sprinkle on the parsley, the red pepper flakes, and the rest of the parmesan cheese. Drizzle lemon juice over the top. You can use artichokes in either a can or a jar and just roughly chop them. 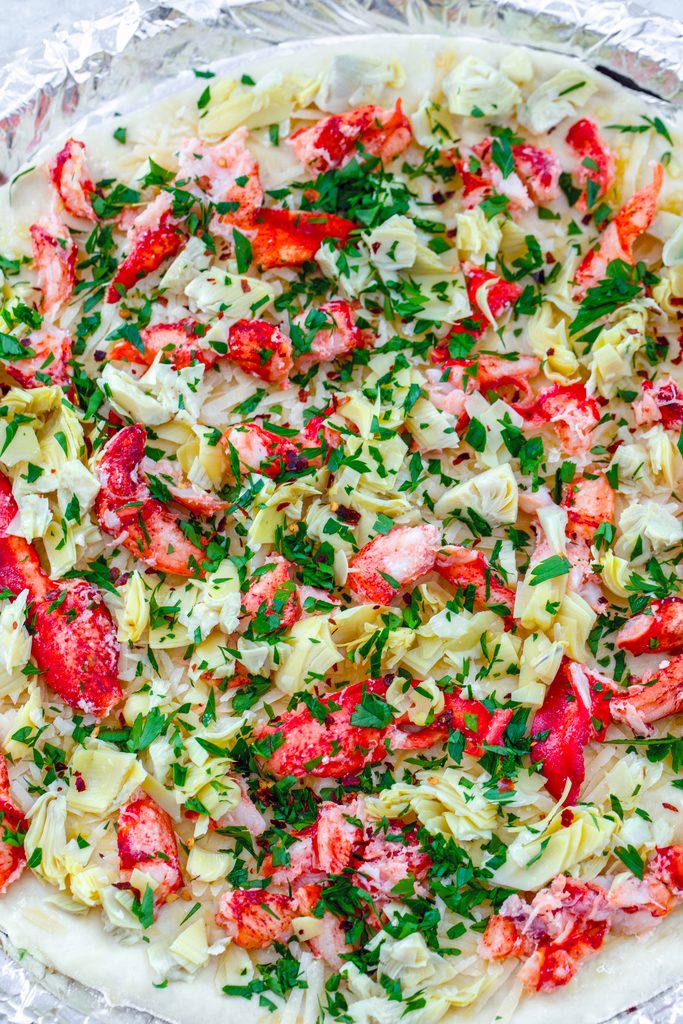 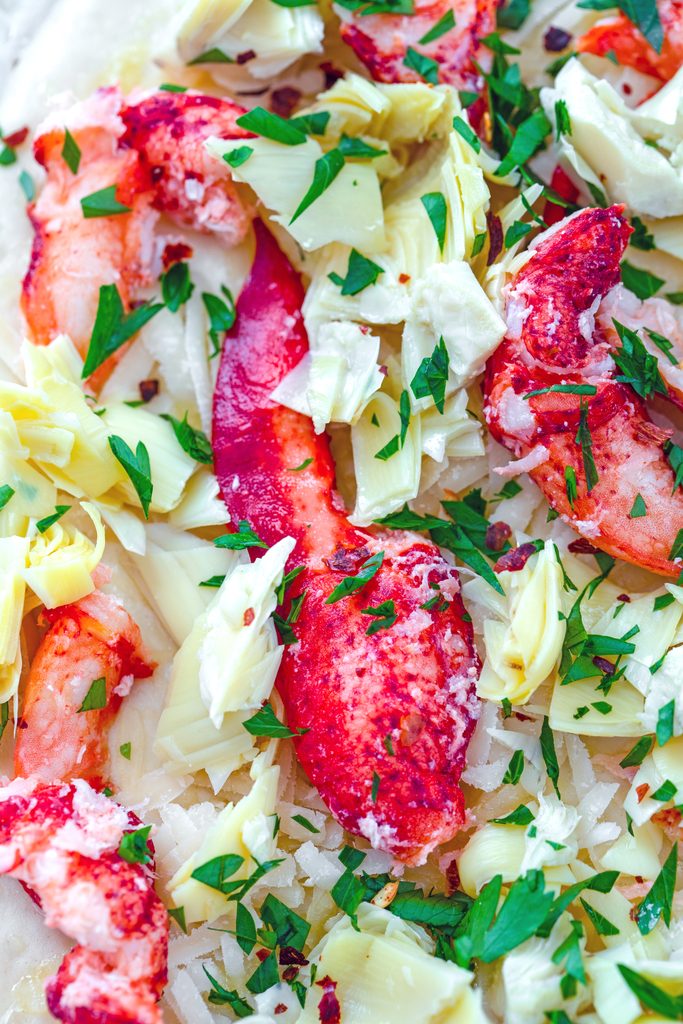 You have no idea how excited I was for this to be ready. I popped it in the oven for 18-22 minutes (until edges were nice and golden).

And I didn't wait a minute before digging in. I burned myself on the pan. It was worth it. 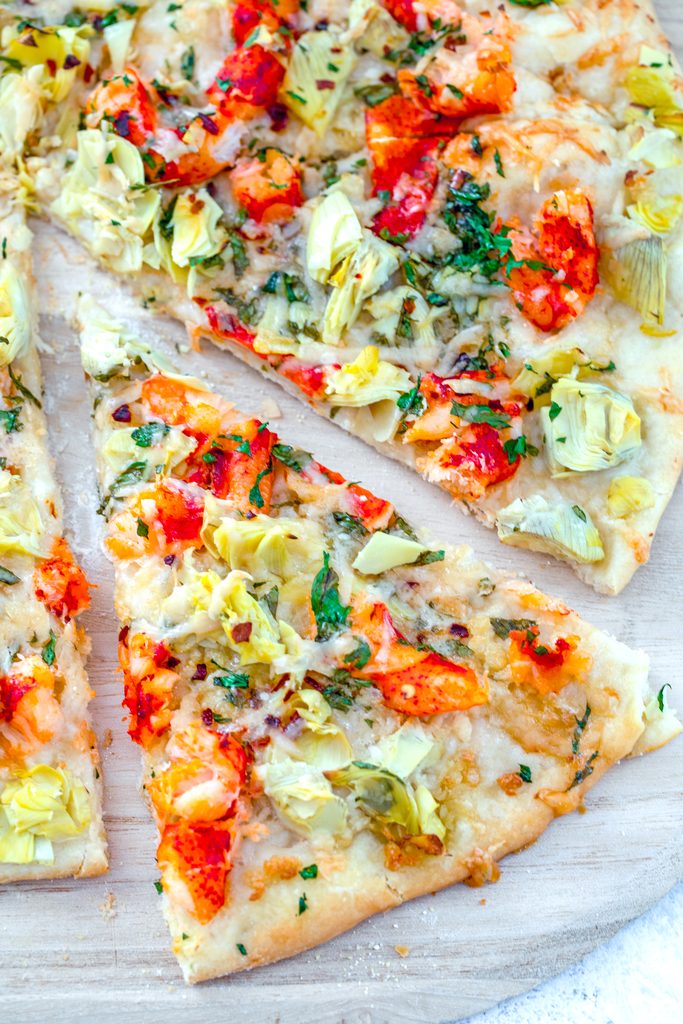 I'm pleased to say my dreams really did come true with this lobster flatbread. It has everything I was craving, from nice big chunks of lobster to the refreshing zest of the lemon juice.

I love that it's packed with plenty of fresh garlic and that there's absolutely no scrimping in terms of lobster meat. You have to admit, whenever you order a dish involving lobster at a restaurant, you partly judge it based on how much lobster is actually involved. You find yourself saying things like, "It was SO good; every bite had a piece of lobster!" or "Yum! They definitely didn't scrimp on the lobster!" This is one of those, get a piece of lobster (or two!) in every single bite. The way it should be (you know, like life in Maine. Which also involves lots of lobster). 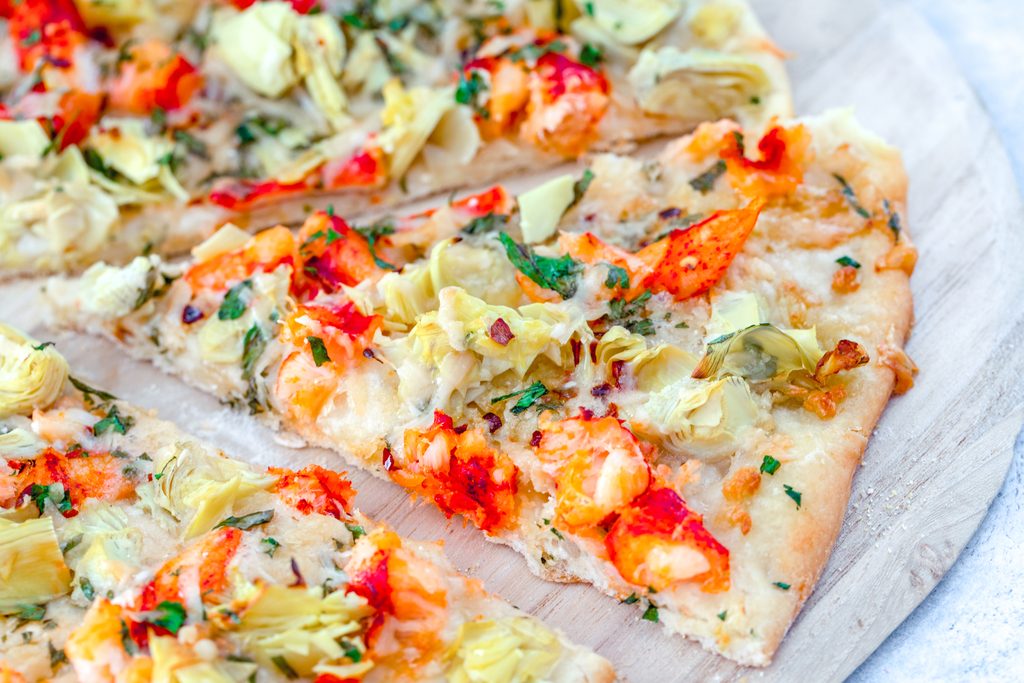 I don't know if I've ever had lobster and artichokes together, but it's a fabulous combination. Artichokes are pretty mild with a bit of an Earthy flavor that doesn't take away from the lobster but complements it nicely. Parmesan, garlic, parsley, and lemon similarly perform accompanying roles to the lobster meat.

Summer heaven. If you're not going to eat your lobster right out of the shell or in a lobster roll, lobster pizza is the way to do it. 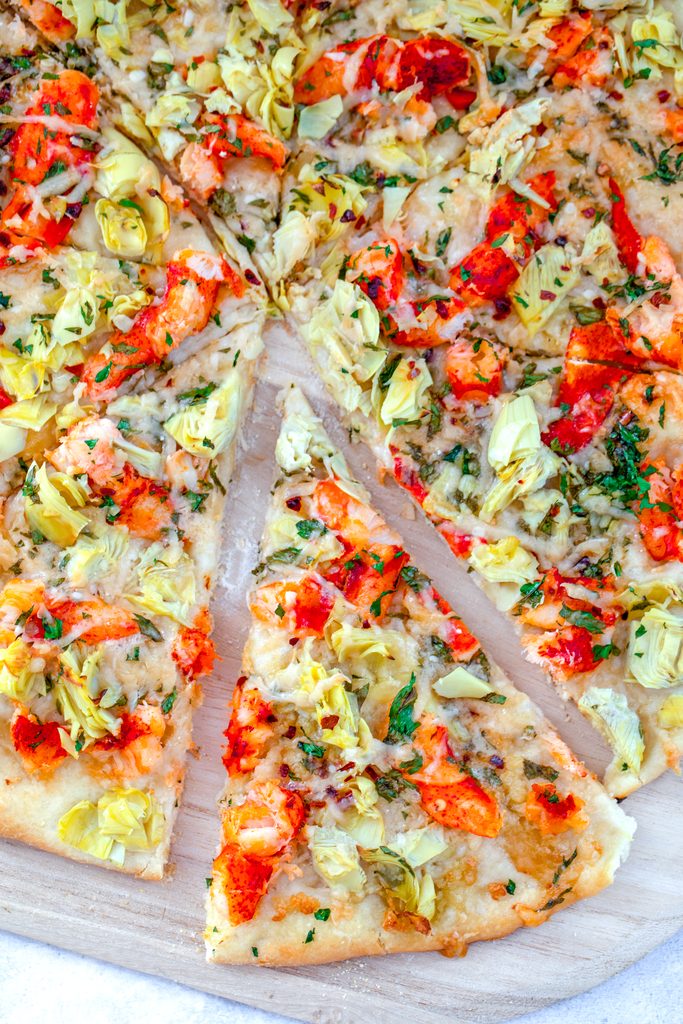 No boiling lobsters yourself and no mess from cracking the shells makes this a lazy man's lobster flatbread. But I'm more than OK with that. Especially considering how quickly this made its way to my dinner table.

And now that it's officially summer (!!), I'm so excited for a season FILLED with lobster eating. I've already indulged several times in the spring and am not planning on slowing down any time soon.

Do you love lobster? What's your favorite way to eat it?

If you like this lobster pizza recipe, check out some of my other pizzas, like this Shrimp Scampi Pizza and this Sausage, Grape, and Gorgonzola Flatbread. I also can't ait to try these Garlic Butter Lobster Tails from Rasa Malaysia! 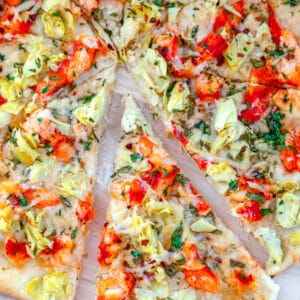