(This recipe for Lucky Charms Ice Cream was originally published in September 2012, but has been updated with new photos and content in 2019).

I originally made this Lucky Charms ice cream wayyy back in 2012. At the time, I was lamenting about how I was about to turn 30 years old and how fast time was flying by. Oh, I was so young and innocent back in those days! And also, a really bad photographer. Seriously, though.

Which is exactly why I'm taking the time to update this post. To be fair, 2012 was a different time in the recipe creation/food blog world and I'll never forget when Bon Appétit magazine picked this recipe up and featured my photos on their website.

These days, Bon Appétit wouldn't give those photos a second look. And most readers probably wouldn't either. Because even though the actual recipe is amazingly delicious, people eat with their eyes and want an ice cream that looks as pretty as it tastes.

Also these days? There are probably hundreds of recipes for Lucky Charms ice cream on the internet. Back then, mine was one of the only ones, so beggars couldn't be choosers.

It kinda makes you wonder where we'll be in another 6.5 years. And also how the heck 6.5 years flew by so quickly. Did you know that scientists have actually done research that supports the fact the older you get, the faster time appears to move? And that if you live to be 80, you've already passed through 71% of the subjective experience of the passage of time by the time you're 40? That is so freaking scary to me.

Of course, the passage of time and getting older isn't all bad. I mean, when you're a kid, you're not allowed to pick the marshmallows out of your Lucky Charms. You have to eat all those darn "healthy" (but not really… just not artificially colored marshmallows) cereal pieces. And it's obnoxious how off the marshmallow to cereal ratio is, right?

But when you're in your 30s, you can do whatever you want. Annnd then you quickly realize how annoyingly tedious it is to pick marshmallows out of a box of Lucky Charms. Sigh.

If you're scared of making homemade ice cream, don't be! It's actually really easy, even for custard-based recipes. While there are plenty of no-churn ice creams out there, I still fully believe you're going to get the best, creamiest ice cream with a maker, so I recommend investing in one (they're great for adding to wedding registries!).

I have the ice cream attachment for my KitchenAid mixer and absolutely love it (that link is an affiliate link and though the price fluctuates, it's super on sale at the time I'm writing this post, so keep your eye on it!).

And also because I have an addiction to making homemade fluff. My 6-year-old self would be seriously thrilled by this revelation.

To start the ice cream making process, make yourself a bowl of Lucky Charms (but don't eat it!). Seriously though, combine the cereal with the milk and pop it in the fridge for about 30 minutes. You really want to let the flavors meld so you're left with a delicious cereal milk.

Strain the milk from the cereal and you're left with a glorious bowl of cereal milk. Which we all know is delicious and the best part of a bowl of cereal (well, maybe besides marshmallows).

Now, heat that milk and sugar in a medium saucepan over medium heat. Stir constantly, until the mixture just reaches the point of simmer. Then remove from heat. While you're heating your milk, lightly whisk the egg yolks in a separate medium bowl.

And pour about half of the warm milk into the egg yolks, whisking all the time (this process is called tempering and is done slowly so you don't heat the eggs too much and cook them). Then pour the egg/milk mixture back into the saucepan with the rest of the milk.

With the heat on low, continue whisking until mixture thickens up and coats the back of your spoon. Keep stirring and keep your eye on it because you don't want it to thicken too much and start getting clumpy. Remove from heat.

Pour heavy cream into a large bowl. And strain the egg/milk mixture through a fine mesh sieve into the heavy cream, continuing to whisk.

Do I Need an Ice Bath When Making Ice Cream?

Lots of people will tell you the bowl of cream should be in an ice bath when you pour the egg/milk mixture in. But I've made a lot of ice cream using all different methods and I've determined that the ice bath is a lot of extra work for no difference (in my opinion).

As long as your cream is cold and you're getting your mixture into the fridge right away, I don't think an ice bath is necessary.

Cover the bowl with plastic wrap (so that the plastic wrap is touching the top of the cream mixture to avoid a skin forming) and move to fridge for about 4 hours (I usually make my ice cream base one day, let it sit in the fridge overnight, and finish it the next day).

While the mixture is chilling, or whenever you want, whip up that fluff. If you've never made fluff before, I'll tell you now, it's superbly easy. And worth it. Just try it. Please?

How to Make Homemade Fluff

All you do is beat egg white, corn syrup, and salt in a mixer on high until the mixture thickens (4-5 minutes). It will start off clear, but after beating it, it will turn white. Then mix in confectioners' sugar, vanilla, and cream of tarter. And marshmallow fluff is yours!

This recipe make a little bit more than you need for the ice cream, so do something fun with it.

OK, back to the ice cream! When the ice cream mixture is chilled, process it in ice cream maker according to manufacturer's directions. For me, that means pouring mixture into my chilled ice cream bowl and mixing on low for about 20 minutes.

When the ice cream was almost done, I added about 1 ½ cup of marshmallow fluff and my 1 cup of Lucky Charms marshmallows.

Scoop the ice cream in an airtight container or two and pop in the freezer for about 6 more hours until it's at the consistency of your liking. I know. It's a lot of waiting. But the results are totally worth it.

And at last, you can call your magical Leprechaun friends in for dessert. It's like the pot of gold at the end of the rainbow. This Lucky Charms ice cream really actually does taste like cereal milk. I'm not sure if Momofuku invented the whole cereal milk idea, but I kind of want to marry it.

I also quite honestly want to marry this ice cream. It is legit that good.

By the way, is it just me or have cereal box toys gone way downhill since we were kids? If the boxes even include anything these days, it's trading cards or something you have to send away for.

But I will never be too old for concocting desserts out of sugary kids cereals.

And I hope you will never be too old to enjoy them. Or to at least humor me. For the most part, that's all I ask. But you really should make this Lucky Charms ice cream, even if you think you're too old for it.

Your inner kid will come out and you'll completely forget how old you are. Age is just a number anyway. At least that's what I'll keep telling myself. Age is a number and marshmallow-EVERYTHING is delicious always and forever.

If you're looking for more delicious recipes using Lucky Charms, I have quite a few ready for you! I absolutely love baking with Lucky Charms and the options for what you can make with them are endless. Here are some of my favorite recipes:

Though this Lucky Charms ice cream is the most perfect St. Patrick's Day dessert, Lucky Charms really knows no season and the ice cream can be enjoyed year round, just like the cereal.

And once you try this, you're going to want to keep your freezer stocked all the time!

Do you still enjoy a bowl of Lucky Charms cereal every now and then? 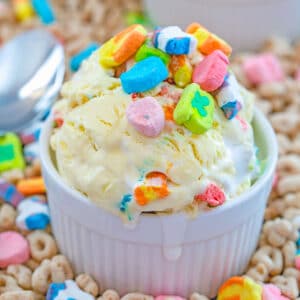 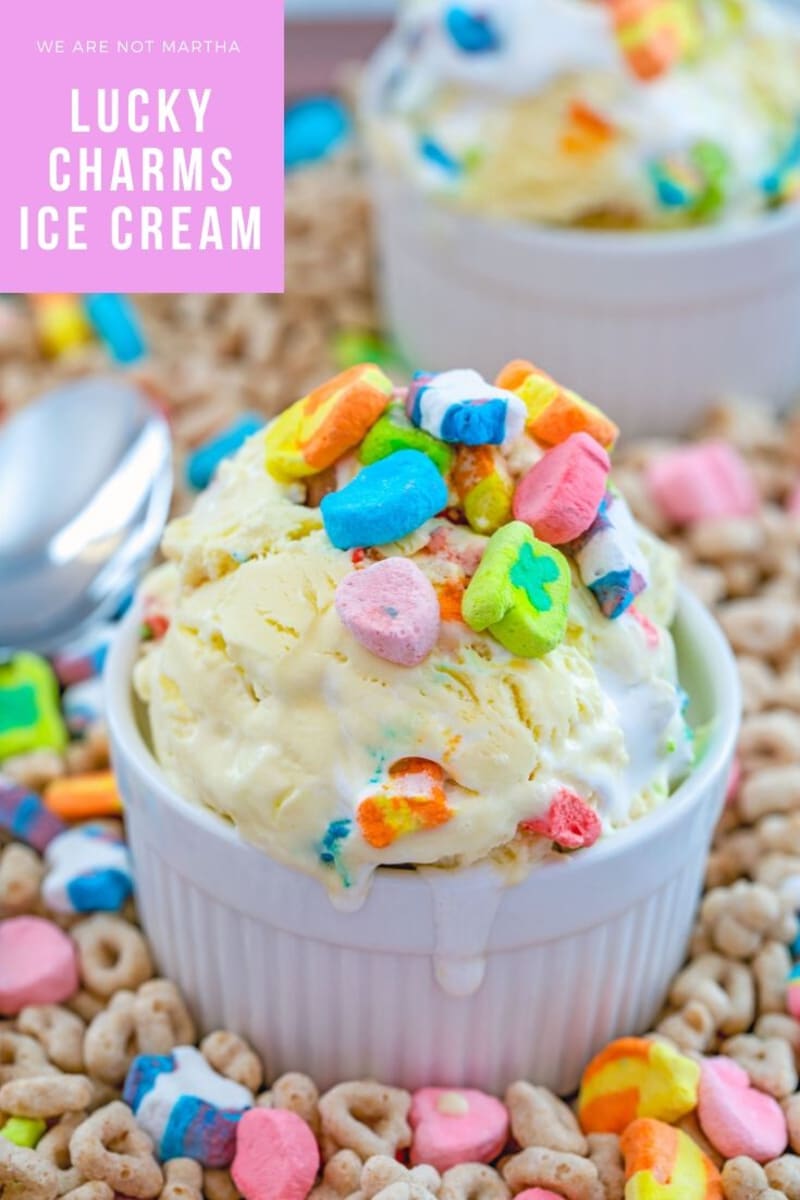 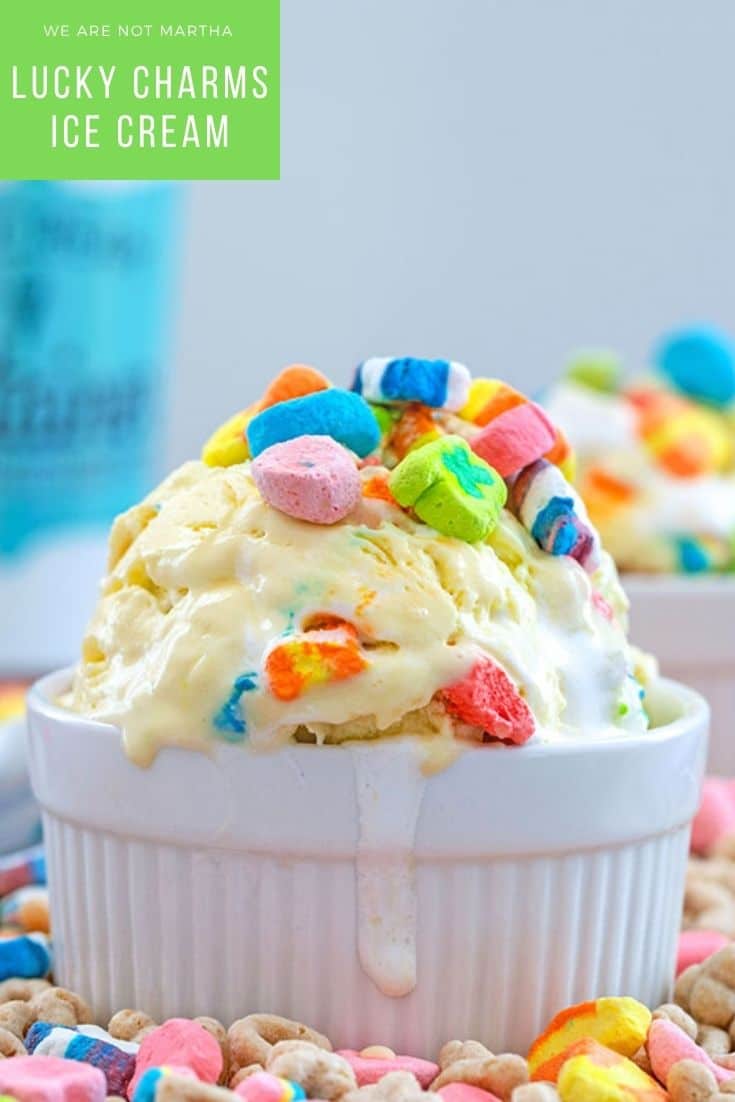