Lucky Charms Hot Chocolate is made with cereal milk, marshmallow fluff, and plenty of Lucky Charms cereal marshmallows and is the most magically delicious hot chocolate you've ever had.

You probably knew I wasn't going to let March 17 pass by without giving you a new Lucky Charms recipe, right?

The thing is, Lucky Charms desserts are totally appropriate any time of year... But they definitely pick up in popularity around St. Patrick's Day. It's like we're all just looking for an excuse to buy that sugary fun cereal that isn't a part of our regular diets.

Well, please take this as your excuse. Spring may be on its way, but it's still pretty chilly in much of the country and it's still very much hot chocolate season. Combine that with Lucky Charms season and... well, you see where this is going.

Of course, you can also use store-bought marshmallow fluff. But I also kind of consider it my life's duty to show you how easy it is to make fluff from scratch. And to convince you it's a good idea to always have a container of it in your fridge.

Even with the homemade marshmallow fluff involved, you don't need too many ingredients to make this St. Patrick's Day hot chocolate. Here's everything involved (see recipe card below for ingredient amounts and full instructions):

How to Make Homemade Marshmallow Fluff

How easy is it to make homemade marshmallow fluff? SO easy that it borders on being a bit dangerous.

In the bowl of an electric mixer or in a large bowl with a hand mixer, beat together egg white, corn syrup, and salt on high-speed for about 4-5 minutes, until it thickens and turns white.

Mix in confectioners' sugar, vanilla, and cream of tartar on low-speed for about 1 minute, until well combined.

That's it! You now have homemade fluff in your life.

You only need about ⅓ cup of marshmallow fluff for the Lucky Charms hot chocolate, but you can keep any leftover in your fridge in an airtight container for about 10 days.

I made this hot chocolate with cereal milk, which simply requires you to infuse 2 cups of milk with Lucky Charms for about an hour. And then pour the milk through a strainer into a saucepan, leaving the cereal behind.

Once you heat the milk and mix in the chocolate, you may think the Lucky Charms flavor is overpowered... But I do think it adds to the overall flavor of the hot chocolate and is totally worth it.

I decided to use milk chocolate for this drink because I wanted a nice rich hot chocolate, but felt like Lucky Charms matched with milk chocolate better than a darker chocolate.

Just roughly chop it up.

Now, set the saucepan over medium heat and once milk is hot (but not boiling), add chopped chocolate and whisk to combine.

Continue whisking until chocolate has completely melted into milk, making sure you don't let milk boil.

Remove the saucepan from heat and stir in marshmallow fluff.

And pour the hot chocolate into mugs, topping each mug with ¼ cup Lucky Charms cereal marshmallows. Or more if you want.

I should note that Swiss Miss actually makes a pre-made Lucky Charms hot chocolate... But wouldn't you rather have a homemade version with real cereal milk, high-quality milk chocolate, and marshmallow fluff mixed in?

I'm pretty sure homemade Lucky Charms hot chocolate is the only hot chocolate I'm going to want from now on. It's a rich and incredibly smooth drink with an added creaminess from that marshmallow fluff.

The cereal flavor is a little bit subtle but the fluff helps bring it out as do the added cereal marshmallows on top.

Did you know you can buy bags of Lucky Charms marshmallows? They're not "official" marshmallows, but my friend gifted me with a bag and they taste JUST like them.

My secret? I always add some of the marshmallows to my bowl when I'm enjoying Lucky Charms. Let's be real, there definitely aren't enough marshmallows in each box of cereal!

And trust me, there are A LOT of delicious recipes you can make with Lucky Charms.

Speaking of... if you're looking for more ways to enjoy Lucky Charms this St. Patrick's Day season (or any time of year!), I've got you covered! Here are some of my favorite Lucky Charms desserts and drinks:

This Lucky Charms hot chocolate just happens to be one of the most simple and delicious ways to enjoy the cereal, other than just pouring it in a bowl with some milk.

Of course, it's an extremely kid-friendly drink. But based on some informal surveys I've done, plenty of adults love Lucky Charms just as much as kids do.

And homemade hot chocolate? We all deserve a mug or two for surviving through yet another winter season.

When was the last time you had homemade hot chocolate? 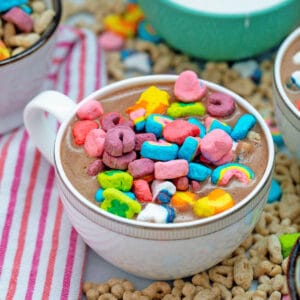 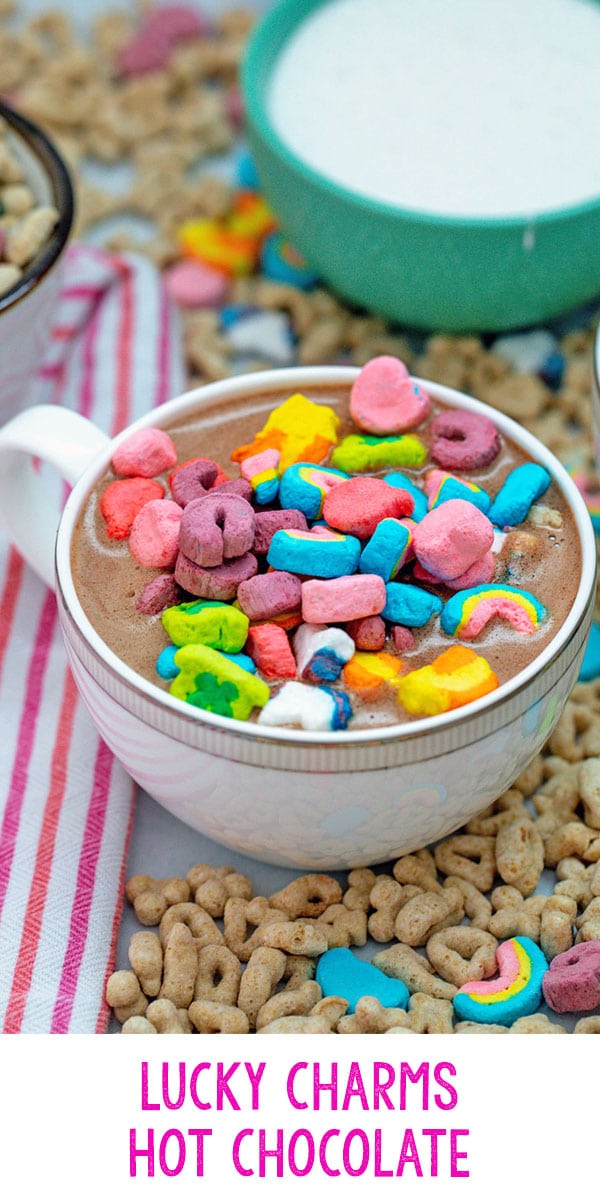