This homemade Lucky Charms Oatmeal infuses Lucky Charms flavor into healthy wholegrain oatmeal. Of course, it's also topped with plenty of those yummy cereal marshmallows! This is the perfect way to enjoy Lucky Charms for breakfast while also getting in some nutrition!

Did I just turn cereal into cereal? I think I did. But maybe I'm actually a genius because I turned a typically sugary unhealthy cereal into one that has a bit more nutritional value. You're welcome.

I love Lucky Charms, but I don't typically eat it for breakfast and save it more for desserts and special snacks. I do, however, eat oatmeal for breakfast at least a couple times a week. So, I decided to combine the two and make this Lucky Charms oatmeal.

Why you'll love this recipe

If you're a fan of Lucky Charms and want to enjoy it in many different forms (trust me, I understand, I have A LOT of recipes with Lucky Charms on my blog!), you'll want to try this oatmeal.

I know you can buy Lucky Charms oatmeal at the grocery store, but it's sold in those little sugar and preservative-packed packets. This is a homemade version with just a few ingredients!

It's delicious and easy to make. And you can feel a bit better about eating it for breakfast since you're getting in some whole grains, too. Even if you're still topping it with quite a few marshmallows!

You don't need much to make this tasty cereal oatmeal. Here's what it takes:

The key to this recipe is to infuse the liquid with Lucky Charms cereal before making the oatmeal.

You can use any liquid you like for oatmeal, but for this one, I use half milk and half water. I find that oatmeal made with all milk is often too sticky and glue-like, instead of wonderfully creamy like you might imagine.

But I wanted this version to have a bit of a milky flavor to it to stay true to Lucky Charms, so I used half milk and half water and it was perfect!

You'll want to let your cereal sit in the liquid for at least an hour so the flavor can infuse. For two servings, I recommend using 1 ¼ cups milk and 1 ¼ cups water. Once the cereal soaks some of the liquid up, you'll be left with about 2 cups for the oatmeal.

Strain the cereal out of the liquid over a medium saucepan. You can press on the cereal a bit with a wooden spoon to get more of the yummy liquid out.

The milk/water will be a bit of an odd color, but don't worry; that means the rainbow cereal goodness has been infused in!

Now you're ready to make the oatmeal! Bring the liquid to a boil.

Once it's boiling, add oats and reduce heat to a simmer.

Cook for 10-15 minutes, stirring occasionally, until oats have absorbed most of the liquid and desired consistency is reached.

And serve the oatmeal in bowl, topped with Lucky Charms marshmallows.

You don't have to add the additional marshmallows... But I recommend you do. (you can also buy a bag of just the marshmallows if that's something that interests you!)

I absolutely love this Lucky Charms oatmeal because it's a lot more fun than the typical boring oatmeal. The cereal flavor is mild and it's not overly sweet by any means. But it's definitely there! Essence of Lucky Charms, if you will.

I'm sure the packets you can buy at the store are a lot sweeter and likely taste just like you're eating a bowl of Lucky Charms. This one tastes like a bowl of oatmeal that has a light Lucky Charm flavor thanks to the infused milk and water.

I don't list the nutritional information for this particular recipe because I'm honestly not quite sure how to calculate it with the infusion. Do we count that 1 ½ cups of Lucky Charms or not since we're really just extracting some of the flavor and sweetness from it?

In any event, this is a whole grain breakfast that will keep you full and get your day off to a great start while also being a whole lot more fun than the typical bowl of oatmeal.

How to re-heat oatmeal

This recipe makes two servings, but it's easy to cut in half for just one. Or you can make the whole batch and heat up the leftovers the next day if you prefer.

You can either heat it up in a saucepan over low heat, while stirring frequently or in the microwave. Either way, I recommend you stir a little extra milk or water into the oatmeal before heating.

And definitely don't add on the marshmallows until you're ready to serve.

This is a magically delicious sort of breakfast that both kids and adults will enjoy. Especially on St. Patrick's Day morning... But really, any time of year!

If you're as obsessed with Lucky Charms as I am, you'll want a million ways to enjoy them other than just in a bowl. Here are some of my favorite recipes:

I'm always dreaming up new cereal desserts, so I'm sure I'll have more for you soon!

In the meantime, I hope this Lucky Charms oatmeal can play a part in making your mornings a little bit brighter!

Do you eat oatmeal for breakfast or would you rather have a bowl of Lucky Charms? 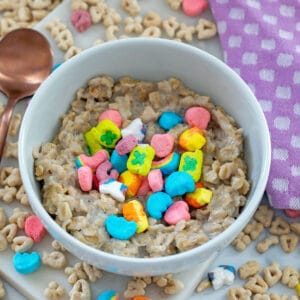 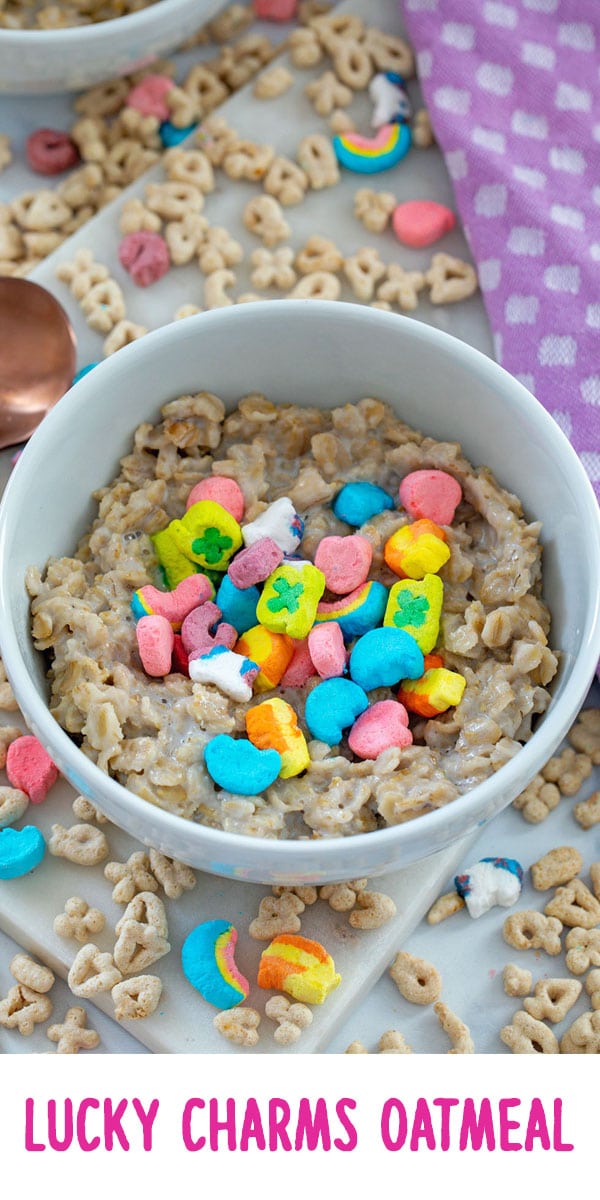