These simple baked chicken wings are tossed in an apple cider sauce and make for the coziest fall dinner.

Once fall hits, I turn into a full-on apple cider addict. It's serves a permanent place in my fridge and brings me so much seasonal joy as the weather cools and foliage changes.

I love that I can enjoy a nice cold glass when the weather is still warm (like this week when it's been 75 degrees in New England in November!) or heat it up and enjoy warm cider on a chilly fall evening.

I also love that it's so easy to cook and bake with. In addition to making delicious cakes and donuts and adding dimension to cranberry sauce, apple cider is the perfect accompaniment to all kinds of meat.

When you think of apple cider and meat, you probably most closely associate it with pork. But it also goes fabulously with chicken. And these Apple Cider Chicken Wings are solid proof of that!

Chicken wings are one of my favorite go-to weeknight dinners because they're so easy to make. Plus, there are a million different ways to make them, which means you don't feel like you're having the same meal over and over again.

This recipe for apple cider chicken wings is incredibly easy and really consists of just a few simple steps:

I tossed the wings in a simple paprika, garlic powder, salt, and pepper mixture.

I briefly considered using fall spices like cinnamon and ginger, but I didn't want to go overboard and wanted the wings to keep a savory flavor.

I always add baking powder to my spice mixtures for wings. When baking chicken wings, baking powder will react with the skin to draw moisture out and help make them crispier.

How Long to Bake Chicken Wings

Baked chicken wings tend to be crispiest when baked at a high heat. Always place them on a baking rack instead of directly on baking sheet to allow air to circulate.

These apple cider chicken wings are baked at 450 degrees for a total of 45-50 minutes.

Start by baking for 30 minutes. Then flip wings and bake for another 15-20 minutes, until they're golden and crispy.

How to Make Apple Cider Sauce

While wings are in the oven, you'll also want to make the apple cider sauce. Simply whisk all the ingredients together in a medium saucepan over medium-high heat.

Bring to a boil and once boiling lower heat to a simmer for about 25 minutes, until sauce reduces and thickens a bit.

When wings are done baking, remove from oven and place in a large bowl. Pour apple cider sauce over the wings and toss to coat.

Place wings on platter and pour any sauce remaining in bowl over them. Top with apple slices and chives or scallions.

I might say this with every new chicken wing recipe I make, but these apple cider chicken wings are my new favorites!

The wings are perfectly crispy and the sauce has the perfect amount of sweetness and fall flavor, balanced out a bit by the paprika and black pepper.

You probably wouldn't even be able to guess these are baked (and not fried!) since the skin is so crispy. Muhaha it can be our little secret!

They're also ooey-gooey and finger-licking good. You'll definitely want to have extra napkins while eating these... But isn't that true for all good chicken wings??

While delicious for dinner (with a veggie side), apple cider chicken wings are also fabulous for serving at any fall parties or game watching gatherings!

If you want to try a different chicken wing recipe every week of the year (basically what I do!), check out a few more of my favorites: 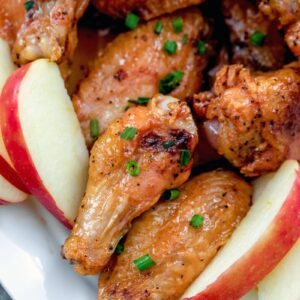