(This recipe for Carrot Zucchini Donuts was originally published in March 2011, but was updated with new photos and content in 2020).

Long story short, these were supposed to be muffins but I couldn't find my beloved muffin tin. After tearing my place apart, mumbling a few choice words under my breath, and slamming every cabinet in my kitchen, the dang tin never showed up.

After searching high and low for far too long, I decided to just make them into donuts because, evidently, my donut pan is a lady and comes home after a crazy night... unlike little Ms. Muffin Tin.

But then, I think it was really a blessing in disguise. There is no shortage of zucchini bread and zucchini muffins in this world. But zucchini donuts? You just don't see those quite as often.

And these ones are extra special as they're Carrot Zucchini Donuts topped with a Greek yogurt icing. Since they're veggie packed and topped with Greek yogurt, you better believe I'm recommending these for breakfast. But they also make a mighty delicious dessert.

I loved the idea of these muffins/donuts because if you're going to eat a baked good, why not include some veggies? Especially zucchini and carrots, two of my favorites, that also happen to add a great deal of moistness to baked goods.

I very loosely followed a recipe from Whole Living. I used it as a base for measurements but definitely switched several things up according to my own tastes and what I had available in my kitchen.

Pre-heat your oven to 400 degrees and spray your donut pan lightly with cooking spray.

Slowly fold the flour mixture into the carrot mixture until just combined, taking care not to over-mix.

Now for the fun part. OK, maybe beating egg whites isn't fun per say, but it is fun how adding whipped egg whites to baked goods makes them extra light and fluffy.

And gently fold the egg whites into the carrot mixture.

Now you can begin to spoon or pour the batter into your prepared donut pan. Fill them just about to the top. I like to put my batter in a little plastic bag with an edge cut off, so I can pipe the batter right into the tin.

They should take about 10 minutes in the oven and be starting to turn nice and golden. To check for doneness, insert a toothpick into the center of one to make sure it comes out clean.

Be fully prepared for your kitchen to smell like, well, Heaven.

As the donuts were baking, I decided to make a frosting for them, too. They're absolutely perfect plain, since they're filled with such great flavors, but a little frosting never hurt anyone, now did it?

Plus, it's OK to eat two in one day because they have veggies in them. And whole wheat flour. And wheat germ.

Take ½ cup of the yogurt and mix it with ½ cup confectioners sugar and a ftsp of vanilla and let it sit in the fridge for about 30 minutes to thicken up.

Then, dip the donuts into the yogurt frosting.

I double dipped, but you do you.

Because I promise you won't be able to wait. Even if it's not breakfast or dessert time... Apparently they make fabulous snacks, too.

Really, these are some of the most moist baked donuts I've ever made. And I think I owe it to the carrot, zucchini, and Greek yogurt incorporated into the batter. Think baked donuts are dry and cake-y? Not these carrot zucchini donuts!

And the Greek yogurt icing has a nice little bite to it, which balances out some of the donuts sweetness.

Isn't it funny how some people can claim not to like zucchini, but when you put it into a baked good, they're suddenly all in? I guess I can't totally blame them.

And with that, I tell you that sometimes mistakes actually lead you to something better than what you were intending. Thank you to my missing muffin tin.

What's your favorite happy accident in the kitchen?

If you're looking for more ways to use your plethora of summer zucchini, check out my Baked Zucchini Chips or my Mexican Zucchini Boats. And speaking of zucchini bread, I do really want to try this Chocolate Zucchini Bread from Jenny Blogs! 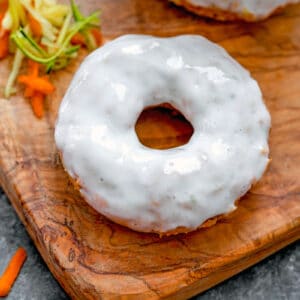