If you're a beer lover, you need to try this Chocolate Stout Ice Cream! And if you're not a beer drinker? You still need to try it because I'm almost positive it will make you fall in love with chocolate stout (and you can always add fudge sauce if necessary!).

(This recipe for Chocolate Stout Ice Cream was originally published in March 2011, but has been updated with new photos and content in 2020).

Admittedly, I've been adding alcohol to a lot of the desserts I've been making lately. From cupcakes to brownies to cookies, you might think it's been getting a little out of hand. But is it? I mean, alcohol is the key ingredient in a lot of recipes and generally the alcohol all burns off and doesn't have any effect on you anyway. Right? Er, except for this chocolate stout ice cream.

I've always said that chocolate stout is a good "introduction beer" for people who don't really like beer. I think stouts often scare people because they're so dark, but they're actually super smooth and not hoppy (it's the hoppy flavors that make a lot of people dislike beer). Chocolate stouts can be decadent, kind of like a dessert!

But if you're still too iffy to pour yourself a glass for chocolate stout just yet, make this ice cream first. It will ease you right into a beer loving life.

And no, you don't have to wait for spring or summer to start making ice cream again. The beer has a warming effect, which makes this ice cream perfect for cold weather. I promise.

WHAT KIND OF CHOCOLATE STOUT TO USE FOR ICE CREAM

You can use any kind of chocolate stout you want for this ice cream! Young's Double Chocolate Stout is one of my favorites for the price, but I also absolutely love Southern Tier's Choklat and Dogfish Head's World Wide Stout. But if you have a favorite, go ahead and use it!

IS IT OK TO EAT RAW EGGS IN ICE CREAM

One thing you'll notice about this chocolate stout ice cream is that there's no cooking involved. That means the two eggs go directly in to the ice cream mixture without being cooked. So, you may be wondering if that's OK.

Obviously I'm not here to tell anyone what they should or shouldn't do, but I will tell you that I eat ice cream made with uncooked eggs all the time. If I know I'm not going to be cooking them, I always use organic, farm-fresh eggs and keep them refrigerated until ready to use.

Of course, there’s always a risk of salmonella or foodborne illness when working with raw eggs, but that's also the case with a many other ingredients (many people don't realize it's often the raw flour and not the eggs that cause illness from eating cookie dough!). There are also only 2 eggs in this ice cream recipe that makes 1 ½ quarts.

However, if you’re immune-compromised or pregnant, I wouldn’t recommend using them and would make a custard-based ice cream instead (basically, you heat the milk/cream and sugars and mix them with the eggs to temper and then add everything back to the pot to heat to a temperature that ensures the eggs are cooked. Personally, I often like raw egg ice cream better than custard-based, but really, I love ANY ice cream!

This beer ice cream recipe is super easy, though you do need an ice cream maker (here's an affiliate link for my favorite). Otherwise, it's just whisking all the ingredients together in a bowl.... And spending a lot of time waiting for the ice cream to chill. That's the worst part!

In a large bowl, you'll whisk the eggs until they're light and fluffy, about two minutes. Then add both sugars a little bit at a time, whisking as you go, until they're well blended.

Add the milk and cream and continue whisking to combine. Then stir in the beer!

And put that beautiful bowl of creamy chocolate stout in the fridge for at least 5 hours. Major snooze-fest. But you really do need to do it. So don't try to skip this step. I guess you could just drink this mixture straight from the mixing bowl and it would be kind of like an ice cream float... Hmmm.

After 5 hours, you can FINALLY churn your ice cream, according to your ice cream maker's directions. Because there's alcohol in this ice cream, it will likely take a bit longer to churn and thicken up. Maybe even up to 50% longer.

I let my churn for about 40 minutes and it was still a bit of a soft ice cream. But that's OK! You'll put it in airtight containers and freeze it for another 5 hours or more (I like to freeze mine overnight).

This is what it looked like when I first put it into my containers:

And then here's what it looked like when it was done chilling. My kind of ice cream... Not too soft, but also super easy to scoop right out of the freezer!

I would say it's a little bit "icier" than some ice creams rather than creamy due to the water content in the beer. If you want to know the science behind all of this, I recommend this Serious Eats post.

Obviously the alcohol does not burn off since you're not cooking it all in this recipe. So, this ice cream tastes exactly how you'd expect a chocolate stout ice cream to taste. Full and rich, with a little bit of oomph. OK, a lot bit. And so, so amazing.

Of course, it's sweeter and creamier than a chocolate stout straight out of the can, but otherwise, it's pretty true to taste.

Oh and by all means, go ahead and sprinkle some chocolate shavings over the top.

I haven't made a whole lot of beer ice creams (this Pumpkin Beer Ice Cream is the only other one!), but I can imagine other types of beers would also make for delicious ice cream flavors. Maybe a shandy ice cream in the summer? You can even reduce the alcohol before you add it to thicken it/remove water content/increase flavor impact.

The options are endless, but I'm telling you, I really think this chocolate stout ice cream could convince anyone to give beer a chance. I mean, there's chocolate involved!

Have you ever added alcohol to ice cream?

I clearly endorse adding beer to ice cream, but next up I'm making this Mudslide Cookie Swirl Ice Cream from If the Spoon Fits! 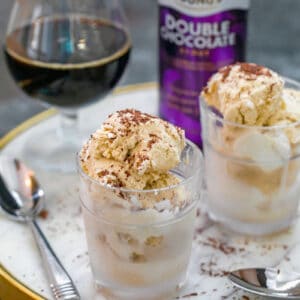 If you're a beer lover, you need to try this Chocolate Stout Ice Cream! And if you're not a beer drinker? You still need to try it because I'm almost positive it will make you fall in love with chocolate stout (and you can always add fudge sauce if necessary!).
Print Pin Rate
Course: Dessert
Cuisine: American
Keyword: Beer Desserts, Beer Ice Cream, Homemade Ice Cream
Prep Time: 15 minutes
Chill Time: 10 hours
Servings: 1 ½ quarts
Author: Sues