This pretty pink ice cream tastes exactly like Starburst candies! Starburst Ice Cream is easy to make with just a few ingredients and if you use the FaveREDs packs, it will have the most lovely hue!

I love when I have a vision for a recipe and it works out just perfectly the first time. Oftentimes, it's when we keep things simple that we get the best results.

And not only is this Starburst Ice Cream simple, but it comes out tasting perfectly like Starburst candies. And it's so amazingly creamy. And the color is just gorgeous, too.

Yes, you can buy Starburst ice cream bars and Starburst jelly bean ice cream in stores... But once you see how easy this recipe is, you're going to want to make your own delicious, preservative-free version at home.

If you're a fan of the sweet candies, you're going to need to try this ice cream immediately!

If you love Starbursts, you will love this Starburst Ice Cream! You can use your favorite color Starburst to make it, but I used the FaveREDs packs to ensure it would be a pretty color (if you mix ALL the colors, it will probably be delicious, but you may end up getting a brown colored dessert).

Though you do need an ice cream maker, this frozen dessert is egg-free and super easy to make. It mostly just requires time and patience waiting for it to chill!

This ice cream is perfect for both kids and adults. Candy lovers unite!

The ingredients for this ice cream are super simple. Note that it's an egg-free ice cream and doesn't require any cooking. Here's everything you need (see recipe card below for ingredient amounts and full instructions):

🍦 How to make Starburst Ice Cream

This isn't a custard-based ice cream, so there's no cooking eggs or even using any heat at all!

The hardest part is waiting for the mixture to chill. OK, and unwrapping all those candies!

I use all the FaveREDs flavors, which include watermelon, cherry, strawberry, and fruit punch. You'll need about 32 candies, give or take (it's OK if you have slightly less or more!).

To start, in a large bowl, whisk together heavy cream, milk, sugar, and salt until combined.

Stir in the Starburst candies of your choice. I mixed all the colors from the Starburst FaveREDs packs and it came out to be this pretty shade.

Now, cover the bowl and let mixture chill in the fridge for at least 4 hours, stirring on occasion.

You want the candies to really infuse into the milk!

Strain any remaining Starburst candies out of mixture (most will completely disintegrate into the milk) and pour strained milk mixture into ice cream maker.

Process according to manufacturer's directions, likely running for about 20 minutes.

Transfer ice cream to containers and freeze for at least 4 hours before serving. The ice cream will be pretty soft when you first transfer it, but it should harden after chilling.

Note that it's still a fairly soft ice cream since it's not custard-based and there are no eggs in it.

If you're looking for some good ice cream containers, I love these ones from Tovolo.

Serve in little dishes and dig in.

I was tempted to top with additional Starburst, but then I took a bite. This Starburst ice cream is SO creamy and smooth and tastes exactly like the candy. Just like when you pick all the pink and red Starbursts out of the mix.

Which, let's be honest, I do often. That's why the FaveREDs packs are so amazing!

With this ice cream, you get ALL the Starbucks flavor and none of the chewy candy stuck in your teeth!

I'm so happy with how this Starburst ice cream turned out and I think it's going to delight any Starburst fans!

Sure, you can buy the sorbet ice cream bars or the jelly bean ice cream... But homemade is SO much better. Especially when it's this easy.

🌈 Can I use any color Starburst?

If you have a favorite flavor, you can even just stick to one color.

🍬 How many Starburst do I need?

This ice cream recipe calls for one cup of Starburst, which equates to about 32 individual candies. If you're using packs of Starburst, you'll need 2 ½ packs.

It might be a bit of a pain to unwrap the candy, but it's so worth it for this dessert!

There are so many more candies I want to turn into ice creams!

This is really an "any time" ice cream, but it's especially perfect for candy-themed birthday parties or Valentine's Day celebrations. 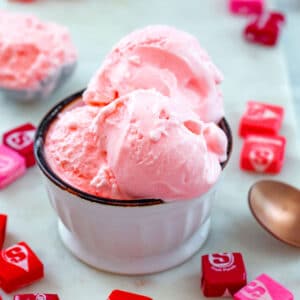 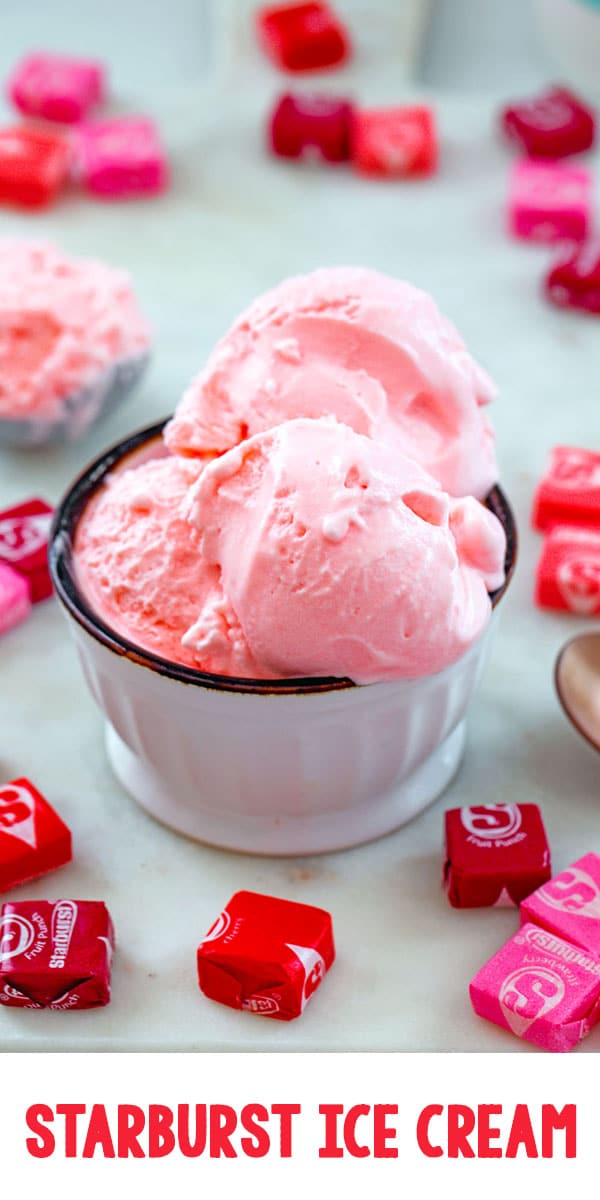