Looking for an easy breakfast that's super unique and fun to eat? These Cinnamon Sugar Naan French Toast Sticks are packed with sweet flavor and will be loved by adults and kids alike!

Is naan having a moment? And a very well-deserved one, at that. While traditionally an Indian bread, naan has entered into the mainstream much more lately and people are using it to make everything from pizza to pita chips

I could live off naan, but though I've made it several times from scratch, it's not something I really do on a whim as it's quite the undertaking for me. Luckily for me, it's easy to buy at my local grocery store!

And while store-bought naan is never as delicious as homemade or what you can get at your local Indian restaurant, it works in a pinch for so many things. Like these Cinnamon Sugar Naan French Toast Sticks.

Not only is this recipe easy to make, but it's so unique and fun! If you're looking to switch up your boring breakfasts, theses french toast sticks will do it!

Plus, who doesn't love all things cinnamon sugar?

You don't need too many ingredients to make these naan french toast sticks and it's very possible you already have most of these ingredients in your kitchen! Here's what you need:

These cinnamon sugar naan french toast sticks are super easy to prepare and are made the same way you would make a traditional french toast. Just with a different kind of "bread," a cinnamon-packed egg mixture soak, and a hot griddle.

The cinnamon sugar dipping session is all bonus.

Start by slicing your naan rounds into strips.

In a wide shallow bowl, whisk together eggs, milk, cinnamon, sugar, and salt.

Melt butter on a griddle or in a skillet over medium heat.

Dip naan strips into egg mixture until saturated and shake off excess batter before placing strips on griddle.

Cook until golden brown, about two minutes on each side.

And serve! I like to serve with individual little bowls of maple syrup so everyone has their own to dip in.

Of course, you can just drizzle the syrup over the top if you prefer.

This recipe serves about 4, but Chris and I may have eaten an entire batch of naan french toast sticks just between ourselves.

But hey, it was a Sunday morning and we had a full day of yard work and housework ahead of us. Food is fuel, y'all.

While lots of people will tell you to use a thick bread for making french toast, I'm telling you that naan is where it's at. Since it's thinner, it fries up better and makes for some super crispy and buttery tasting french toast sticks.

Even though you don't really need it, I would never turn down an opportunity for maple syrup.

Cinnamon, sugar, and maple syrup are pretty much the only things you really need in life.

Kids will love dipping these sticks into maple syrup! But then again, so will adults.

⏲ Can I make these in advance?

I think these naan french toast sticks are best when eaten fresh. But if you want to make them ahead of time, you can just pop them in the toaster when you're ready to eat. Some of the cinnamon sugar coating may come off, but they'll still be tasty!

If you're looking for more easy and unique breakfast recipes, I've got you covered! Here are some ideas:

You have no idea how excited I am about my naan creation. I truly think I discovered the answer to world's best french toast sticks.

And now I'm wondering what other traditional dish naan could reinvigorate. I'm going to have some serious naan-issues in my life. 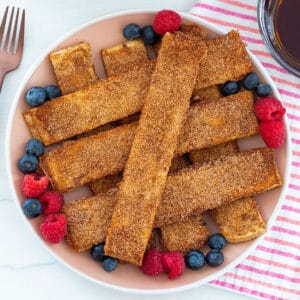 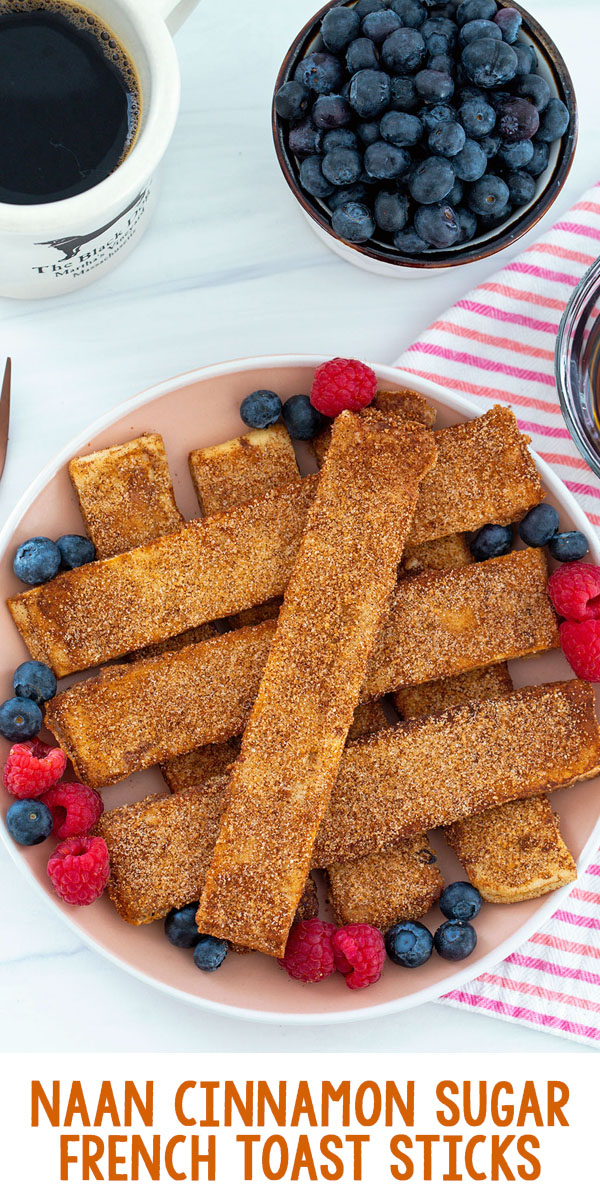