If you love coconut, these Coconut Waffles with Vanilla Coconut Glaze are for you! They're even topped with toasted coconut and are the best reason to get out of bed in the morning! 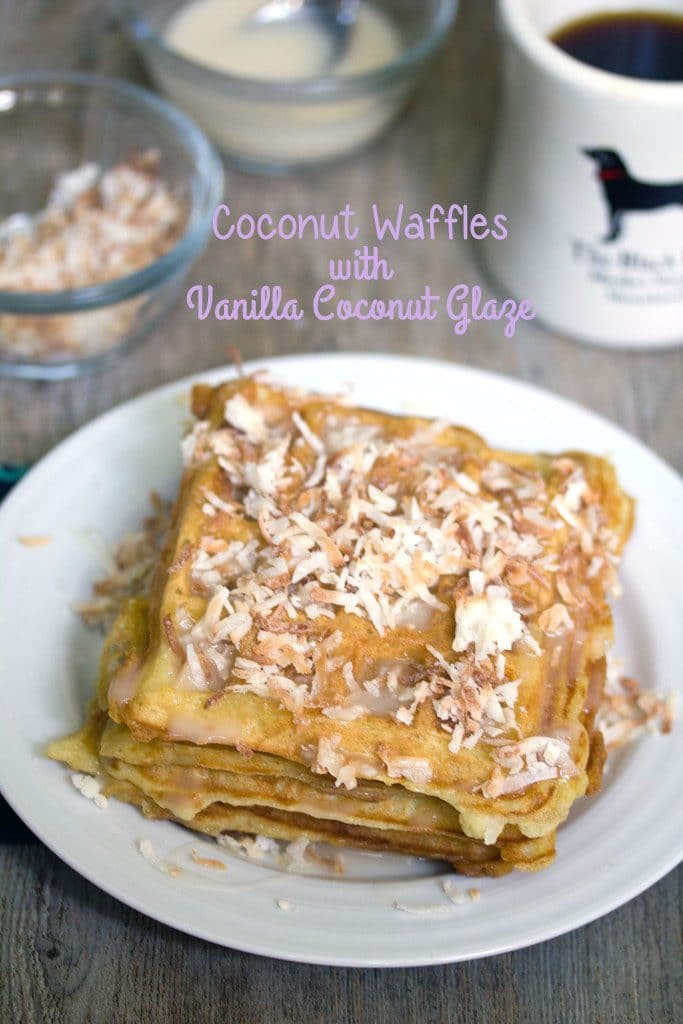 I still haven't had a cronut. Not the original and not an imitation. And I feel like my life may be somewhat lacking because of that. But before I can get too caught up in that fact, the world has already moved on to the next thing in food fads... One of which is the wonut. Yup, a combination of a waffle and a donut. Because, does life really get any better than that?

I obviously haven't had a wonut yet either. Mainly because I live in Boston and we don't often do cool things like that here. And even if we did, I'm probably too lazy to get up at the crack of dawn and stand in line for one. Delivery, please?

I didn't actually think about wonuts (come on, that is seriously the best word ever) until I was eating these coconut waffles. And then I realized my waffles were a bit wonut-like in that they're deliciously sweet waffles with a made-for-donuts glaze drizzled on top. It's like combining the best of both worlds and then sprinkling toasted coconut on top.

If I could open up my own wonut shop in Boston, I totally would. But something tells me I'd be breaking some sort of health code... Not to mention, there's probably already a trademark or two taken out on the word wonut. I'd have to call my creation something else.... Like a doaffle? Doesn't really have the same ring to it, does it? So, I'll just call these Coconut Waffles with Vanilla Coconut Glaze and call it a day. A really, really good day.

Like pancakes, waffles are incredibly easy to make. Even when you get all fancy with coconut and a glaze, they can still be made quickly and easily. Which is probably why they make an ideal breakfast dish. You can mix some ingredients together with your eyes closed. Just be careful when it comes time to use the waffle iron.... You might want to open your eyes for that part.

Also open your eyes when you're toasting the coconut to sprinkle on top of your stack of coconut waffles. It goes from pure white to burnt to a crisp very quickly in the toaster oven or regular oven, so don't say I didn't warn you! 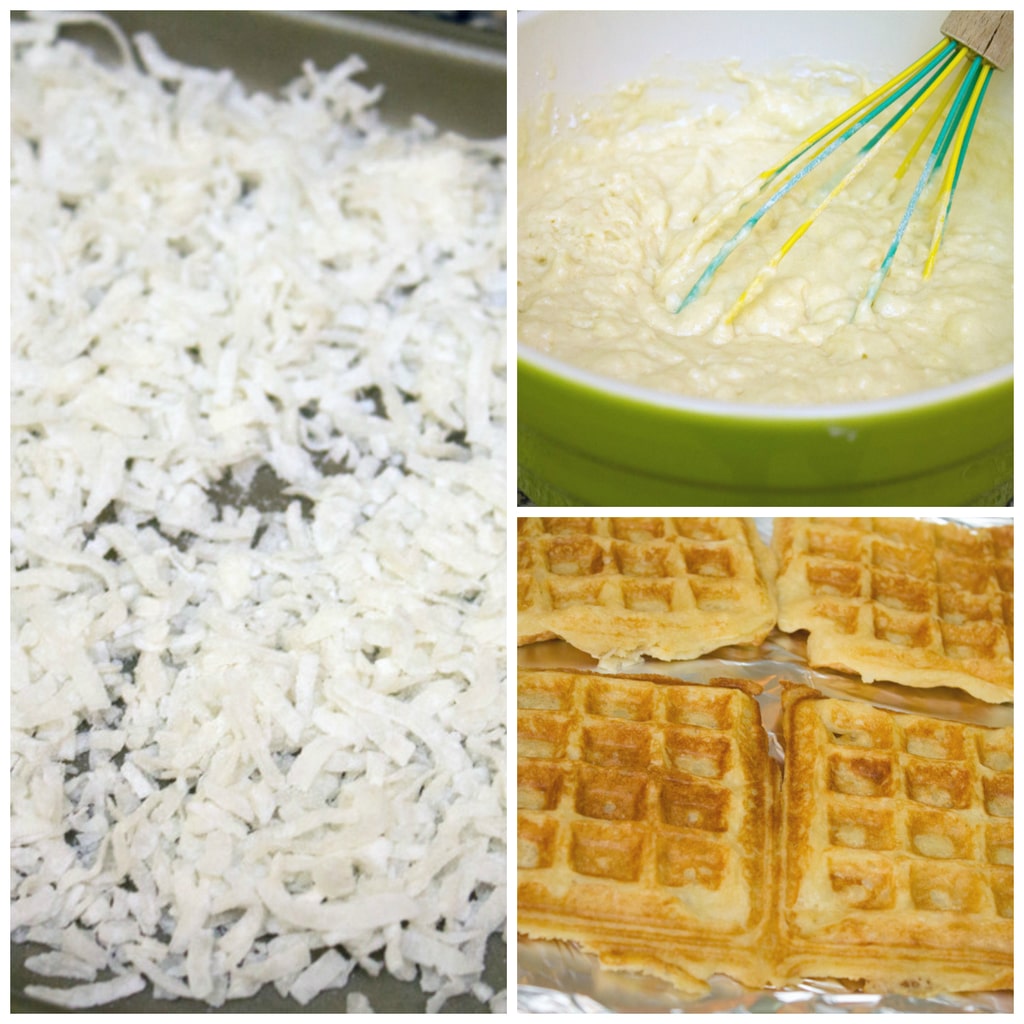 Serve the waffles in a stack, drizzling glaze over the top and sprinkling on toasted coconut.

I almost feel bad posting this on a Monday because, well, I'm assuming most of you are not enjoying a nice leisurely breakfast this morning. I know I'm certainly not. I'm probably sitting at my desk eating a yogurt and maybe a banana as you're reading this. How depressing. 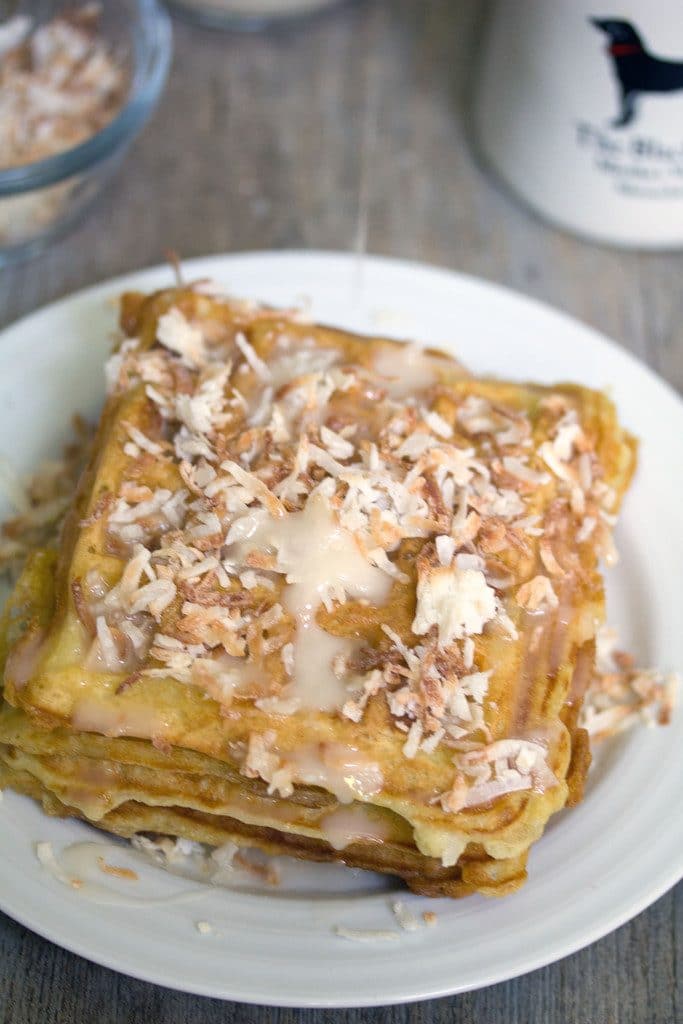 Maybe I'll have to move a waffle iron into my office, so I can make my Mondays a little bit brighter. Of course, it would make for a messy desk and I'd probably light the toaster oven on fire toasting my coconut, but it would be worth it. I should have at least brought a travel mug full of the glaze with me. Would that be weird? I'd be on some kind of crazy sugar high.

Do you have a favorite mug? I drink out of my Black Dog mug every weekend. There's just something about the weight of it that makes it my ideal coffee mug. I've sadly never even been to Martha's Vineyard, but my mom got me this mug back when I was in college and it's been a favorite ever since.

These coconut waffles are most definitely a new favorite, too. I ate an entire stack of them. 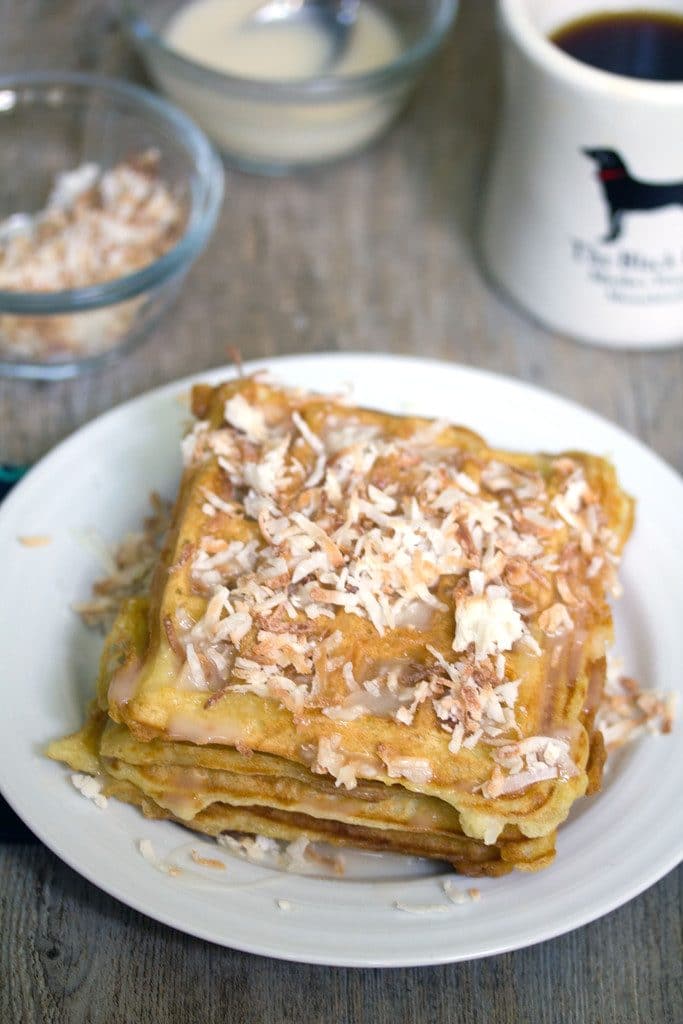 They aren't super sturdy waffles and instead are incredibly moist and packed with flavor. The kind that are easy to cut into and simply melt in your mouth. That could have had something to do with vanilla coconut glaze.

The toasted coconut on top was basically the same thing as a cherry on top of an ice cream sundae. Not totally necessary, but so so worth it. I could eat toasted coconut by the handful. Or the waffle-ful. 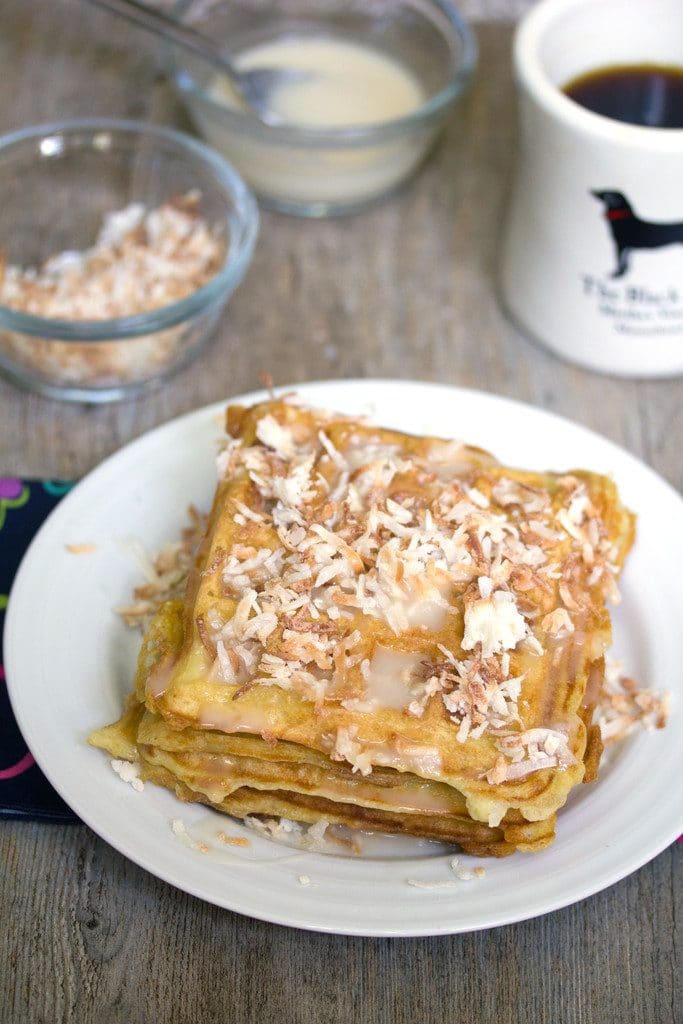 If you're a coconut lover or are close to someone who is, you need to put these coconut waffles on your brunch menu ASAP!

What did you have for breakfast this morning?

If you're looking for more fun waffles recipes, check out my Hard Cider Waffles with Cider Maple Syrup and my super fun Bubble Waffle Banana Split Tacos. I also can't wait to try these Pumpkin Chai Waffles from Noshing to Talk About! 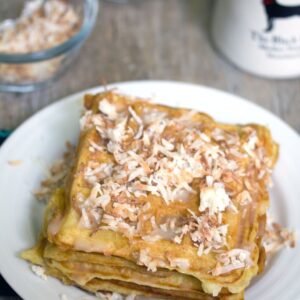 If you love coconut, these Coconut Waffles with Vanilla Coconut Glaze are for you! They're even topped with toasted coconut and are the best reason to get out of bed in the morning!
5 from 2 votes
Print Pin Rate
Course: Breakfast
Cuisine: American
Keyword: Coconut for Breakfast, Fun Waffles, Sweet Breakfasts
Prep Time: 20 minutes
Cook Time: 20 minutes
Total Time: 40 minutes
Makes: 6 servings
Author: Sues