Fish tacos are delicious, but fish tacos with cheese and cajun spices are even better! This recipe is so simple, but incredibly fresh and delicious!

(This recipe was originally published in March 2010, but was updated with new photos in 2018).

Isn't it funny that there are some foods and cuisines that we just never have cheese with? Take most Asian food for example. You don't go to a Chinese restaurant and expect anything on the menu to contain cheese.

And when you have fish, you rarely ever enjoy it with cheese. Until now. Because, what the heck is the point of a taco if there's no cheese involved?

At first, I thought cheese on fish tacos was kind of strange... But then I just went for it and it turned out it's actually fantastic. Especially when the fish is rubbed in Cajun spices and served with a cabbage slaw.

First I have to tell you a secret. I've generally never been a big fish taco person. I LOVE tacos (maybe more than life) and I LOVE fish. But I rarely have fish tacos in restaurants that I really like.

And often when I'm in the mood for tacos, I want beef or pork... Smothered in cheese and guacamole. But I'm pretty sure this fish taco recipe with cheese has changed my mind completely.

I am now a big fish taco person.

What Type of Fish to Use

First things, first you have to decide what kind of fish to use for your tacos. Honestly, you can use whatever you want! One of my favorite fish taco recipes ever is this one for salmon tacos.

But traditionally, fish tacos are made with a white, flaky fish. My favorite choice is barramundi. If you haven't had barramundi before, it's definitely worth trying!  It's a mild fish that is a great source of Omega-3s. Even better? It's a sustainable eco-friendly fish!

However, you can also use mahi-mahi or cod for these fish tacos... Or really, any other type of fish you're craving.

Again, the options are pretty endless when it comes to cheese for fish tacos, depending on the style of cooking you're doing. But I think a sharp cheddar (I always recommend Cabot's Seriously Sharp) is always an excellent choice.

If you like spicy, a habanero cheddar or pepper jack will help give your tacos an extra Mexican flair. (I made this recipe for swordfish stuffed with pepper jack cheese several years ago and it's SO good!)

I'm also currently dreaming up a Greek fish taco with feta cheese and a Buffalo-style one with blue cheese. Once you come around to pairing fish and cheese, you'll start to get all kinds of creative!

How to Make Fish Tacos with Cheese

Once the spices are rubbed onto the fish, you'll cook the fish in olive oil and butter in a skillet.

While fish is cooking, make the slaw! Put shredded cabbage, red onion, scallions, cilantro, and lime juice in a medium bowl and toss to combine.

After warming your tortillas in a skillet, top them with the cabbage slaw and flake the fish over the top.

Then come the chopped tomatoes and shredded cheese!

Of course, you don't have to top these fish tacos with cheese, but I highly, highly recommend you do. Even if it's just a little bit!

And the perfect fish taco with cheese is that easy. I like to serve them with some extra lime wedges and avocado. Because any time you mention "taco," I'm gonna need some avocado, too.

Pick up and dig in. I can honestly say these were the best fish tacos I've ever had. Probably in part because the fish wasn't fried and was full of flavor.

I love knowing that it's all fresh and while eating it, I kind of felt like I was on a beach in California. Though I was really in Boston in the middle of another huge rain storm.

But food can totally transport you, right?

The flavors in the tacos went so well together as did the textures/consistencies- I love the little crunch from the cabbage.

The sharpness of the cheese is amazing. I don't discriminate against cheese and really do love them all, but when forced to choose, I say the sharper, the better. I've never tried a cheese that's too sharp for my liking.

Nor have I met one that's too spicy. Actually, that's a lie... I recently had a ghost pepper colby jack and it almost killed me. It was beyond spicy.

I love cooking fish for many reasons. Not only is it generally super good for you, but it's also often really easy to cook. Most seafood doesn't need a lot done to it to make it delicious!

Here are some of my other favorite fish recipes:

I have to tell you that these go absolutely perfectly with a nice bottle of hoppy beer. Then you'll really feel like you're on a beach in California.

And you'll probably be all kinds of relaxed and forget you have a job and a family and responsibilities and a house to clean. I told you food could transport you.

And now I am a true fish taco believer and am on a quest to convince everyone that you should always serve fish tacos with cheese.

What kind of cheese would you use on fish tacos? 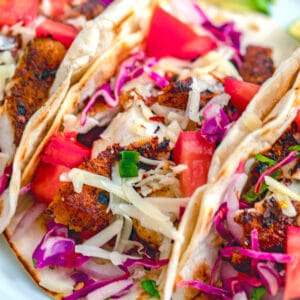