These Cinnamon Toast Crunch Cookies are packed with crushed cereal and sweet cinnamon flavor. They're soft and chewy and the perfect dessert for any cereal lovers in your life!

If my loved ones were writing my obituary today, I'm pretty sure it would mention my passion for baking with cereal. There might be something about simple syrup in there, too.

I'd be perfectly happy with being remembered that way (though hopefully it would also mention what a kind, loving, and caring person I am lol). And for as long as I'm still here, I'm going to bring you lots and lots more cereal recipes (and simple syrups, too).

Next up are these Cinnamon Toast Crunch cookies. It should be known that this is not my first rodeo with cereal cookies. I've made these Fruity Pebbles cookies many, many times and have a couple other cereal cookie recipes coming your way soon.

There's nothing complicated about these cookies. They're made with a pretty simple cookie batter with ground cinnamon and crushed Cinnamon Toast Crunch cereal mixed in.

The toughest part is crushing the cereal. I recommend putting it in a Ziplock bag, placing it on a cutting board, and wacking it with a meat tenderizer.

You could also put it in a food processor, but make sure you don't crush the cereal too much as you want actual pieces and not just crumbs.

For the batter, whisk together flour, baking soda, cinnamon, and salt in a medium bowl. Set aside.

In a stand mixer or in a bowl with hand mixer, cream together butter, granulated sugar, and brown sugar until light and fluffy, 3-4 minutes.

Mix in egg and vanilla until just combined.

With the mixer on low, blend in flour mixture until just combined, taking care not to over-mix.

Line two cookie sheets with parchment paper and scoop about 3 Tbsp cookie dough onto them, about an inch apart.

I think this is easiest to do with a #20 cookie scoop. And if you don't own any cookie scoops, I recommend purchasing a set for all you cookie size needs (plus, they're also great for scooping batter, ice cream, etc.).

Bake the cookies for 10-12 minutes, until they're just turning golden around edges.

Let them cool in the pan for a couple minutes before moving to wire racks to cool completely.

You don't have to make the icing to drizzle on these cookies, but I think it adds a little extra fun and almost feels like the (sweet) milk in the Cinnamon Toast Crunch.

Plus, it's super easy to make! Just whisk together confectioners' sugar, milk, cinnamon, and salt in a small bowl.

And once the cookies are completely cooled, drizzle the icing over them.

Take a bite and you'll immediately find yourself in sweet cereal heaven! These cookies are nice and soft and chewy and have the best Cinnamon Toast Crunch flavor.

I even caught Chris eating one for breakfast one morning... He claimed that since they're made with cereal, it's allowed. Also, they go fantastically with coffee.

Can I Substitute a Different Kind of Cereal?

Of course! Really, you can make these cereal cookies with any type of cereal! You may want to omit the cinnamon from the recipe if the cereal doesn't match well with it and you may want a different type of icing.

Just make sure you crush the cereal before folding it into the batter.

Cinnamon Toast Crunch is one of my very favorite cereals both for eating and baking with. I've created quite a few recipes with it and here are some of my favorites:

And while I love all things CTC, I also just love cereal in general! It's such a fun ingredient to bake with. Here are some of my other favorite cereal recipes (can you tell I have some favorite cereals??):

So yes, my obituary will most certainly mention my love of cereal. But I am by no means done bringing you delicious cereal-packed baking (and cocktail) concoctions here on this blog.

Though my obsessions are currently with Cinnamon Toast Crunch, Lucky Charms, and Fruity Pebbles, the cereal aisle is BIG and the options for what can be made really are endless.

What cereal do you think would be best baked into a cookie? 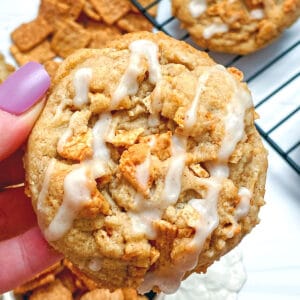 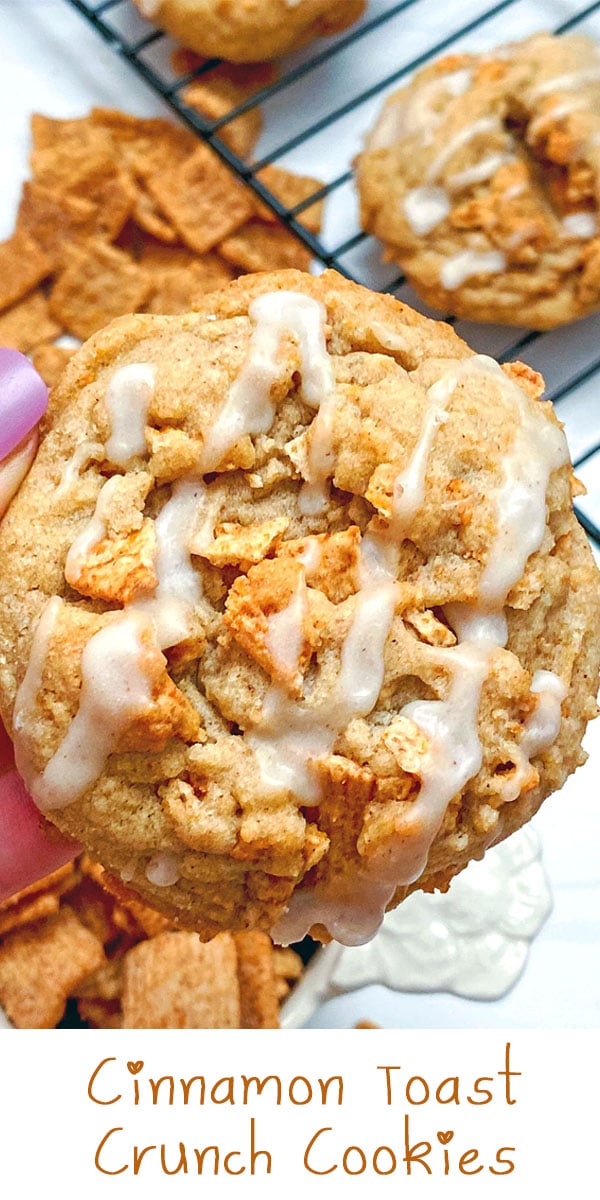