This post is sponsored by Eggland's Best, but as usual, all opinions are 100% my own.

Sweet or savory? I am THE WORST at brunch because I can never decide what I want. The sweet or savory decision feels like the most difficult choice in the world and all I want is for it to be socially acceptable to pour a bottle of maple syrup over a serving of eggs benedict. Or to just live in a world of brunch buffets. But good ones, because everyone knows that buffets have the potential to be horrendous. I'm looking for a buffet with bottomless crispy bacon, eggs benedict with perfectly made hollandaise on lightly buttered English muffins and runny yolk poached eggs, light and fluffy pancakes with real maple syrup, and probably some sort of lobster dish, as well. Bonus points for a bloody Mary bar, full dessert station, and oysters. I'm not asking for too much, am I??

But since no such brunch buffet welcomed me this weekend, I settled for breakfast at home. I wanted eggs, but I also wanted something sweet... So, I married the two with German pancakes, otherwise known as Dutch babies. Last time, I made one large German pancake, which is typically how they're served. But this time, I put my pancake batter into a muffin tin and made mini German pancakes instead. What makes these pancakes different than a regular old pancake? Well, two things, really. Very important things. The amount of eggs used in the batter and the fact that you bake them instead of cook them on a griddle.

You know me and my obsession with Eggland's Best Eggs (the only brand I buy!), so I'm excited to be working with them on this post. Why do I love them so much? Well, EB eggs have six times more vitamin D, more than double the omega-3, 10 times more vitamin E and 25 percent less saturated fat than ordinary eggs. Independent testing has also confirmed that Eggland’s Best eggs stay fresher longer than ordinary eggs. How cool is that? I'm not the only one who loves them... Eggland’s Best is the #1 branded egg in the U.S. And now they're giving you a chance to win a visit from the EB Better Egg Truck! You could also be the lucky winner to get an exclusive Better Brunch from the food truck for you and your friends! Brunch delivered to you? What could be better??

But until you win and brunch is on its way to you, let's talk about these mini German pancakes. The batter is super easy to whip up in your blender. You literally just add all of the ingredients in there and blend them together. Stir in the chocolate chips, butter your muffin tins, and bake away. You might be slightly alarmed when you go to take these out of the oven because they will be rising out of the tin like muffins. But right when you take them out, they'll begin to deflate... Which is exactly what you want.

Where else would you put that delicious cinnamon whipped cream?? And extra sprinkling of chocolate chips??

Though these are egg based, they're definitely more savory than sweet. They're almost custardy in consistency and, I think, much more satisfying than a typical pancake. The other awesome thing about German pancakes is that you can add whatever toppings you want. Leave out the chocolate chips and cinnamon whipped cream and add cheese and crumbled bacon and maybe some diced avocado instead and you can fulfill your savory cravings. Though I admit I'd be tempted to add a drizzle maple syrup over the top of those, too.

These would be perfect for serving at a little brunch party where you want finger foods that are easy for people to grab. Come to think of it, why are brunch cocktail parties not really a thing? I think I'd love an 11:00 a.m. cocktail party in which I could carry around a bloody Mary or mimosa and mini eggs benedicts and German pancakes. Then I could be home and back on my couch in yoga pants by 2:00 p.m. Which is basically how I want to live every Sunday. I need to make this happen.

Of course, I could also just wait for the EB Better Egg Food Truck to show up at my house and bring brunch to me. In that case, I may just leave my yoga pants on.

If you've never had a German pancake (AKA Dutch baby), I recommend you try them out immediately. Aside from being a fabulous brunch party bite, they're also great for packing up and bringing to work to ensure you start your day the best way possible... Especially crucial on a Monday.

Are you more of a sweet or savory brunch person? 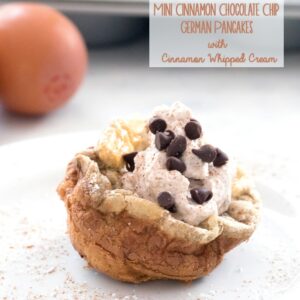